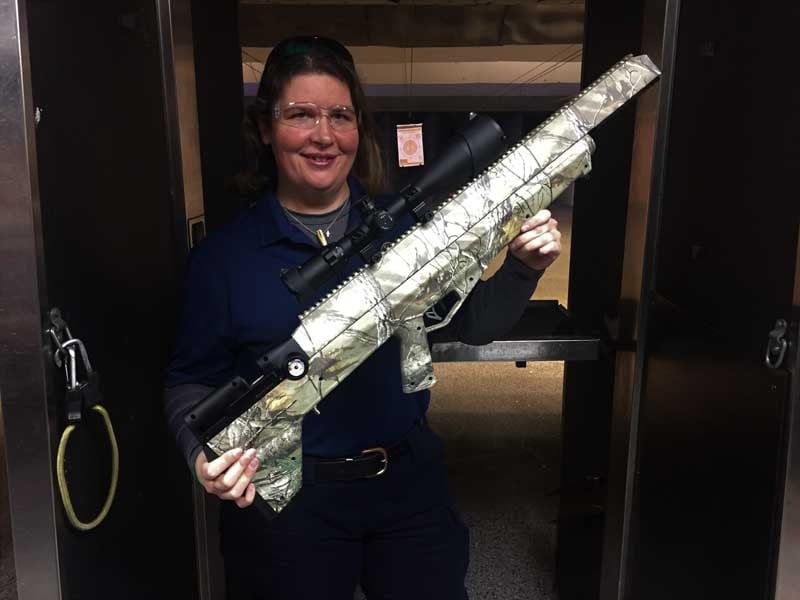 The Bulldog PCP air-driven big-bore in .357 caliber fires a 145-grain bullet. The Bulldog is capable of launching ten shots on a single fill of its pre-charged air system. (Photo: Kristin Alberts/Guns.com)

The journey has been a long one for the Crosman Rifle Company since its beginnings in 1923. From that initial foray into the airgun market, fast-forward to 2019 where we meet the newly-branded corporation Velocity Outdoor. While all things airgun-related still remain at the heart of the company, they have diversified, purchased, and absorbed numerous other brands. Though not many hunters and shooters are familiar with the wide array of Velocity’s products, the company is poised to change that, and here’s what you’ll need to know.

After numerous company purchases and acquisitions by other groups, in mid-2018 Crosman formed the Velocity Outdoor Group. Their headquarters and warehouses are in Bloomfield, New York, where a team of over 300 American workers design and build their products. That’s just a short hop from their roots many decades ago in Rochester, New York.

Their diversified portfolio of companies targets the hunting and outdoor markets, though there is something to entertain an array of shooters from youngsters to backyard plinkers. The Crosman company led the way in the Pre-Charged Pneumatic (PCP) technology space with guns built under the Benjamin brand. In addition, Velocity holds the license to produce airguns for Remington, Marlin, DPMS, and Bushmaster. Recent shake-ups involve the Velocity family of brands acquiring recent powerhouse crossbow company Ravin, whose ultra-compact, high- speed bows push the limits of shoulder-mounted archery.

Current holdings of Velocity Outdoor include seven divisions: Crosman, Benjamin, Ravin Crossbows, CenterPoint Optics, LaserMax, and Game Face Airsoft. Others, like Sheridan, have been absorbed into the family. Basically, Velocity specializes in non-conventional types of weapons, especially for hunters of everything from small to big game.

Velocity pushes the boundaries of what is oft considered the norm for hunters with wild innovation. Remember the air-driven bow? That’s from Velocity. Or a fully automatic BB-gun? Also Velocity. Here are just a few of the higher-profile products from the company, all on display at SHOT 2019 as well as from the company’s pre-SHOT event at Machine Gun Vegas. 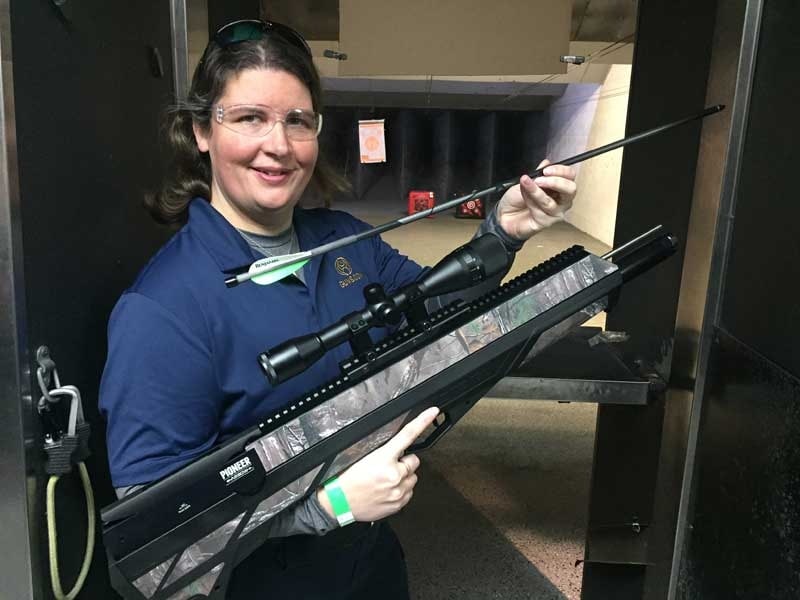 The Pioneer Air Bow has been one of the Velocity Outdoor’s most interesting and polarizing products to date. While few can agree upon which hunting season the Air Bow fits, its unique design launches full-length arrows and broadheads, driven entirely by air. (Photo: Kristin Alberts/Guns.com)

Based on Benjamin’s American-made PCP platform, the Air Bow has created its own category of hunting weapon. Full-length arrows and broadheads are driven completely by air, at a blazing speed of 450 FPS. Best of all, the Air Bow can be easily cocked — and decocked — with two fingers. Powered by 3,000 PSI of compressed air, the Air Bow allows eight shots before a refill. Though debates rage on over where the Air Bow fits in the regulations of archery, muzzleloading, rifle, or simply airgun seasons, each state allows the Air Bow’s use for different species of game. Meanwhile, professional hunters like Jim Shockey have claimed big game around the world with the Air Bow. An MSRP of $999 includes a scope, nine arrows, and Realtree decals. 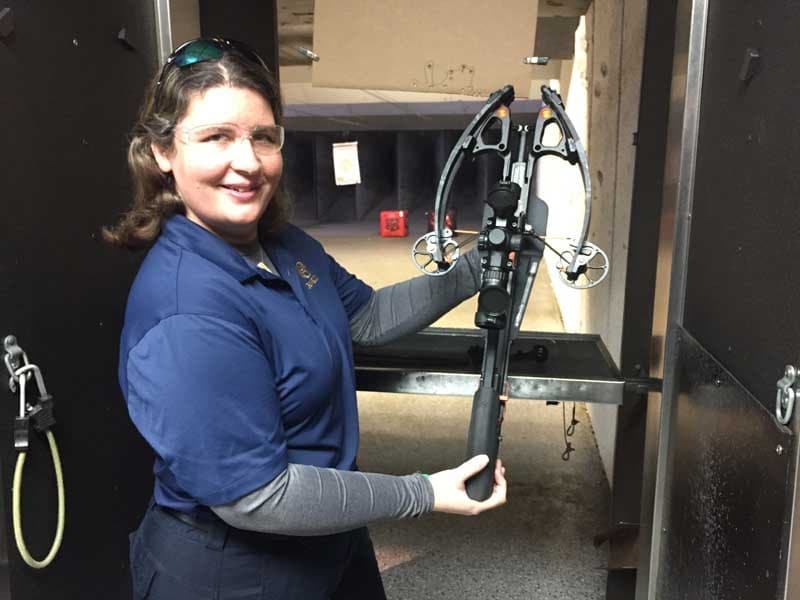 Ravin Crossbows steal the show for their incredibly small stature and high speed. The new R26 here measures only 26 inch long with a cocked axle-to-axle distance of 5.75 inches, yet launches bolts at 400 FPS. (Photo: Kristin Alberts/Guns.com)

If you’ve ever wanted to punch out three-inch bullseyes at 100-yards with a crossbow, then Ravin is the brand for you.  Since their splash onto the market a few years ago, Ravin has been building bows smaller and faster than their competitors, and just when you thought they couldn’t push things much further, enter the R26 and R29 for 2019.  The R26 is only 26 inch long and — get this — its cocked axle-to-axle width is only 5.75-inches. The R26 actually fits inside a large hunting pack, yet fires at 400 FPS.

Likewise, the slightly larger and faster R29 measures 29 inches in length and launches bolts at 430 FPS. With an MSRP of $2,549.99, that’s a tall order for a crossbow, but any shooter who manipulates this bow and spends some time pulling the rifle-quality trigger can’t help but come out smiling and in disbelief at its capabilities. 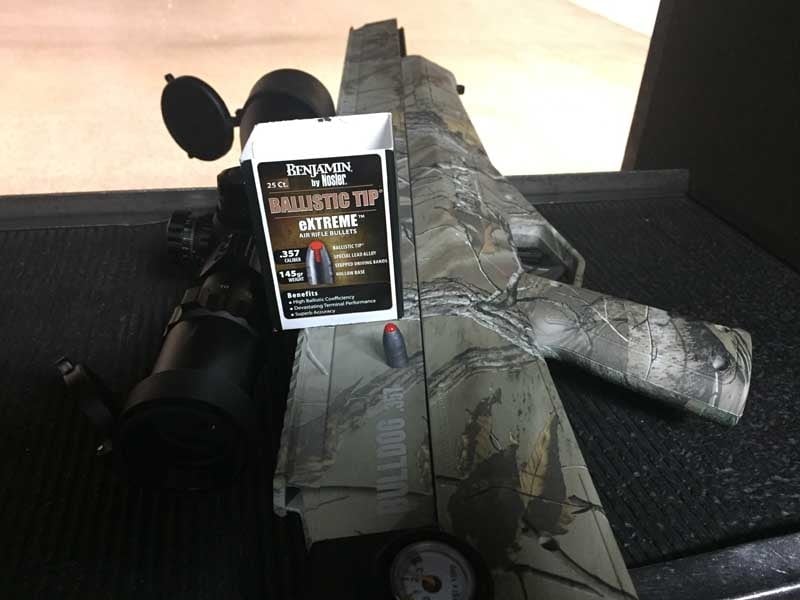 The Bulldog big-bore bullpup air rifle is chambered in .357 and fires 145-grain eXtreme bullets created in conjunction with Nosler. That partnership moves airguns out of the backyard tin can and vermin realm and into deer, predator, and even African big game hunting. The Bulldog features integral sound suppression, a sidelever bolt reversible for lefties, full-length picatinny top rail, five round magazine, and can fire 10 shots at 800 FPS per fill. MSRP on the Realtree camo Bulldog is $899. We fired the Bulldog at Machine Gun Vegas and were impressed with both accuracy, low noise, as well as ease of use. 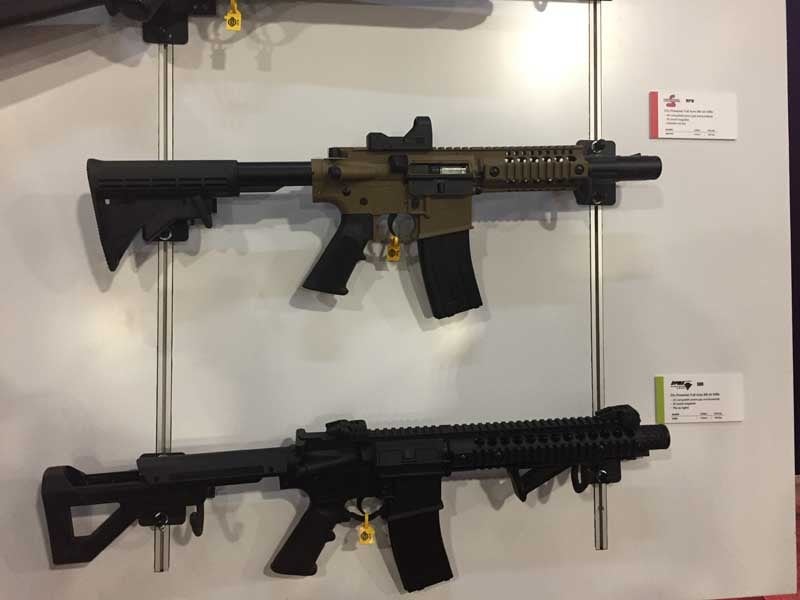 Ever hear of fully automatic air guns? Now you have. Both the Bushmaster SBR and DPMS SBR are made by Crosman. These CO2 powered rifles fire BB’s at a rate of up to 1,400 rounds per minute, though they’re limited by a 25-round magazine. (Photo: Kristin Alberts/Guns.com)

Yes, you read that correctly. The SBR is a fully automatic air rifle. This recently-announced CO2-driven short barreled launces BB’s faster than you can fill the mags, with a rate of fire over 1,400 rounds per minute. Limited only by its current 25-round magazine, this SBR joins a similar version branded by Bushmaster last year. Both weight and features mimic the SBR’s legit AR-style centerfire rifles. MSRP will be $199.99. 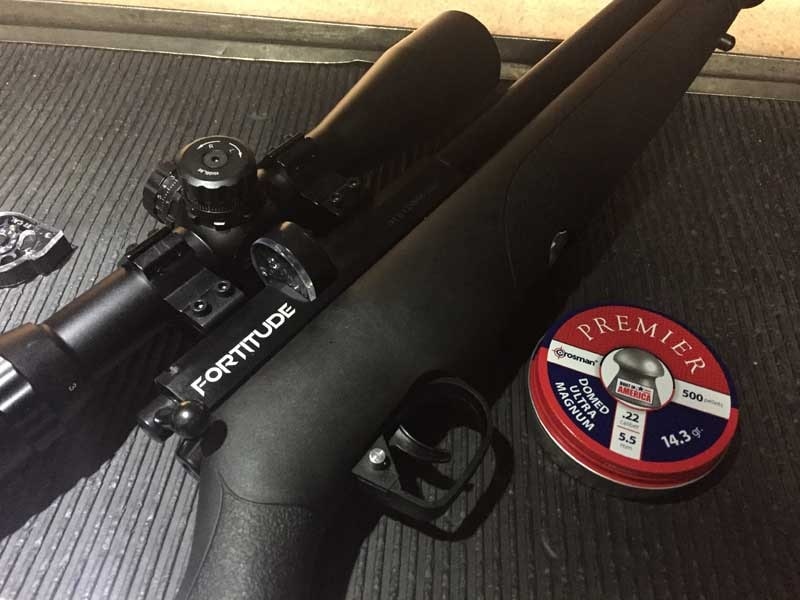 The bolt action Benjamin Fortitude air rifle in either .177 or .22 caliber fires pellets with its PCP format, granting an impressive 90 shots per fill. (Photo: Kristin Alberts/Guns.com)

The Benjamin Fortitude by Crosman is an incredibly long-lasting, bolt action PCP air rifle available in either .177 or .22 caliber. The two chamberings fire at 950 FPS and 800 FPS, respectively. Both are capable of up to 90 shots on a single air charge. A ten-shot rotary magazine is quickly loaded with pellets. The shrouded barrel features fully integrated sound suppression, making this rifle much quieter — and even more fun — than granddaddy’s old Crosman. MSRP is set at $299.99, a reasonable price in comparison with similar PCP guns on the market.

What’s next from Velocity Outdoor, only time will tell.  Only one thing is certain: this corporation is not one to sit back and admire its handiwork, but rather, to continue with fresh innovation, design and products for hunters and shooters. Company reps at Velocity’s Machine Gun Vegas Range event at SHOT 2019 report strong sales with an eye on future growth and innovation. While not every shooter will appreciate every product in the lineup, open minded sportsmen and women willing to think outside the box of more traditional weaponry will find some interesting trigger-pulling on the weapons put out by Velocity.

Editor’s Note: A prior version of this story misspelled Crosman. Article updated at noon EST 1/26/18 to correct this error.