Every year, a few guns rocket to the top of the best-of-the-best list even before they hit the range and the woods. The same may be true for 2019, but Guns.com put together a list of some of the hottest new arms for hunters on display at SHOT. We’re curious to hear your faves. 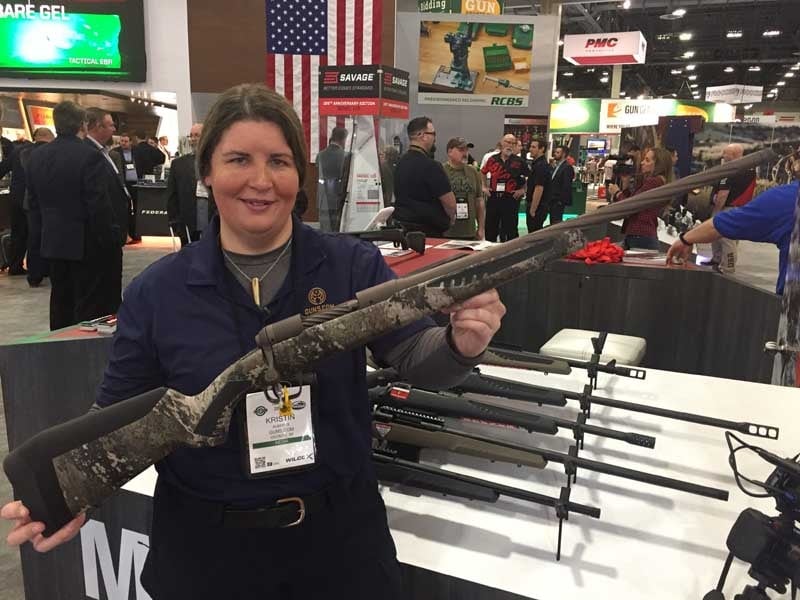 Hands down, one of the best-looking rifles on the show floor is the new 110 High Country. The spiral fluted bolt and barrel, metalwork coated with PVD, and everything “Accu” includes the fully customizable AccuFit system on the True Timber Strata camo stock. Given Savage’s recent track record, we have little doubt the rifle will shoot as good as it looks. When a world-champion professional shooter plans to buy one, you best take a look as well. With 11 calibers on the docket, including 6.5’s in Creedmoor and PRC as well as .280 Ackley Improved, this is an interesting rifle. Keep an eye on Guns.com as we go more in-depth with the High Country soon. 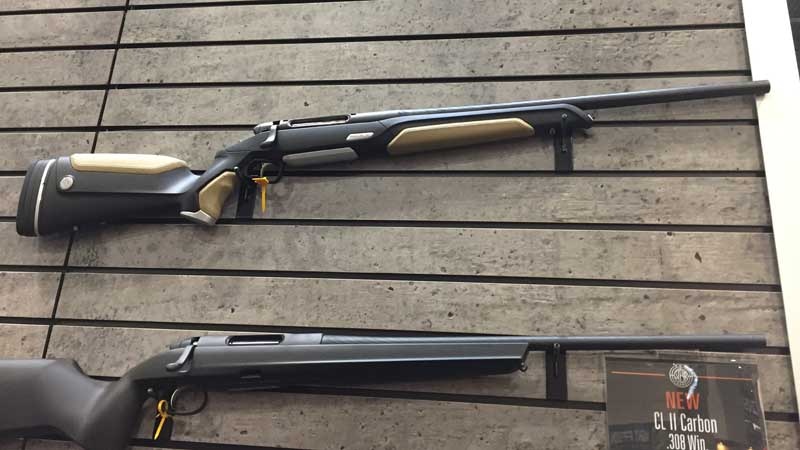 With this game-changing one-piece barrel and receiver marvel, the Monobloc immediately launches itself onto the short list of the top few rifles of 2019. This is the only rifle on the market with the barrel and receiver made from a single block of steel. The ergonomic synthetic stock makes use of replaceable leather inlays and one of the slickest steel dropbox magazines we’ve ever operated. A hand-cocking safety is intriguing, while the set trigger shines. The standard trigger breaks at two-and-a-half pounds, while the set trigger lets go at a wildly crisp eight-ounces. The attention to detail on the Monobloc will be hard to beat at any price, though an MSRP has yet to be announced. 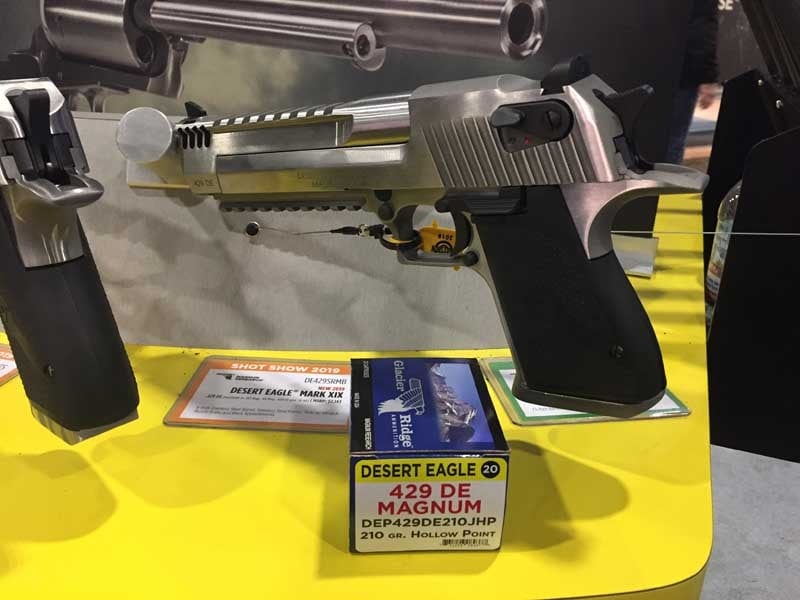 Purpose built for hunters, the new .429 DE caliber is the star of the show here.  The hot chambering will find its home on Magnum Research’s Mark XIX six-inch barreled stainless steel Deagle, though other barrel options are out there. The cartridge advertises 25 percent more velocity and 45 percent greater energy than the .44 Magnum. The .429 DE is made with Starline brass and loaded by HSM with either Speer or Sierra bullets. We’re waiting to pull the trigger on this weighty hand cannon. 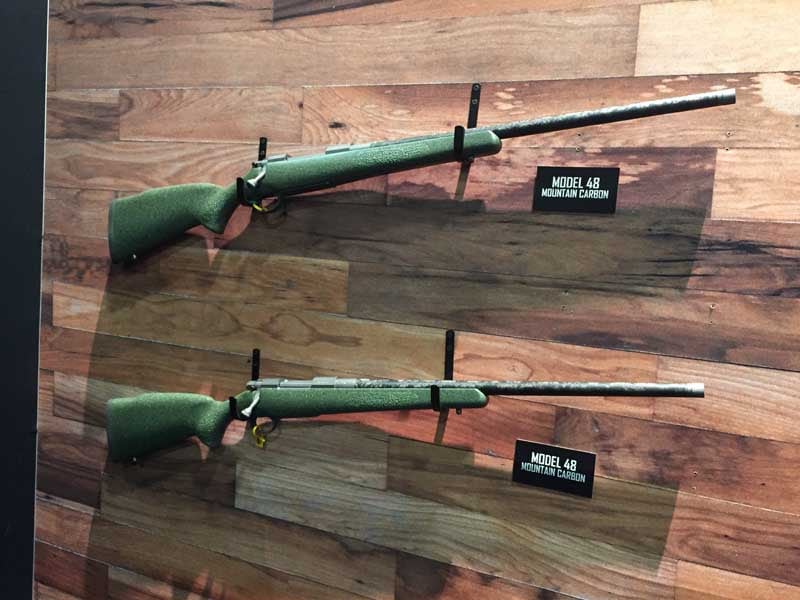 Ultra-lightweight rifles with carbon fiber barrels are all the rage in 2019, and Nosler makes one of the best. The Mountain Carbon uses the material on not only the barrel, but also the stock, for an overall weight of only six pounds. Naturally, the Mountain Carbon is available in all the hottest Nosler chamberings: 26, 28, 30, and 33, as well as 6mm and 6.5 Creedmoor, among others. That includes a sub-MOA guarantee, Timney trigger, and 5/8×24 threaded muzzle. 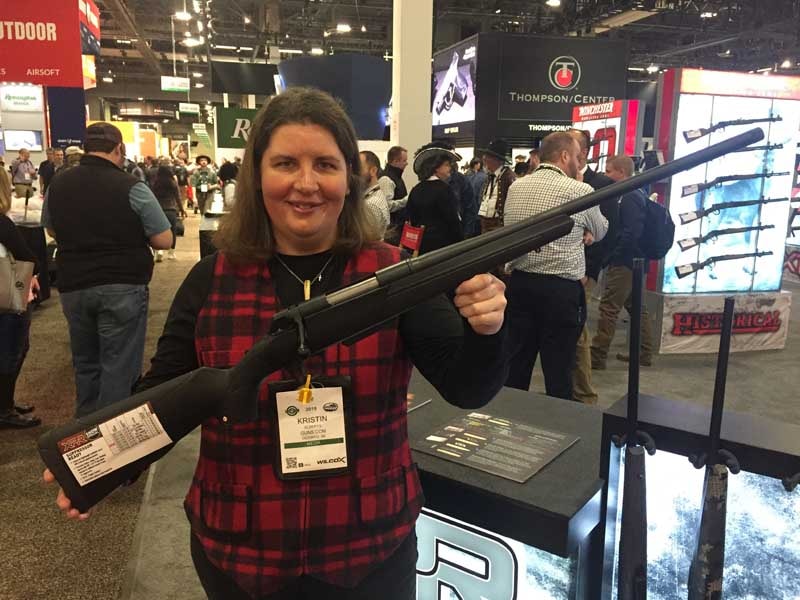 Winchester ups the ante by introducing not only the much-anticipated .350 Legend round with a bolt action XPR rifle, but also, a suppressor-ready combination.  The threaded XPR makes an ideal platform for the Legend, which we enjoyed shooting on the range. Though we fired target FMJ rounds, the company will soon be releasing Super Suppressed .350 Legend Subsonic in 265-grain Open Tip bullets.  With the subsonic ammo and suppressor-ready XPR rifle, game animals will never know what hit them with this hot, new straight-walled cartridge built for hunters. 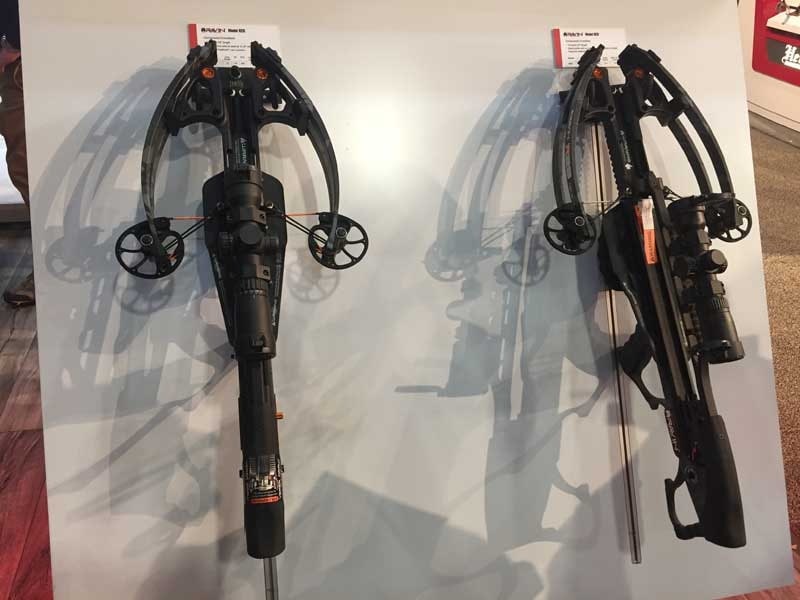 It takes one heckuva crossbow to make it onto a “gun” list. If you’ve ever wanted to punch out three-inch bullseyes at 100-yards with a crossbow, then Ravin is the brand for you. Ravin has been building bows smaller and faster than their competitors, and just when you thought they couldn’t push things any further, enter the R26 and R29 for 2019.  The R26 is only 26 inch long and — get this — its cocked axle-to-axle width is only 5.75-inches. The R26 actually fits inside a large hunting pack yet fires at a zippy 400 FPS. Likewise, the slightly larger and faster R29 measures 29  inches in length and launces bolts at 430 FPS. 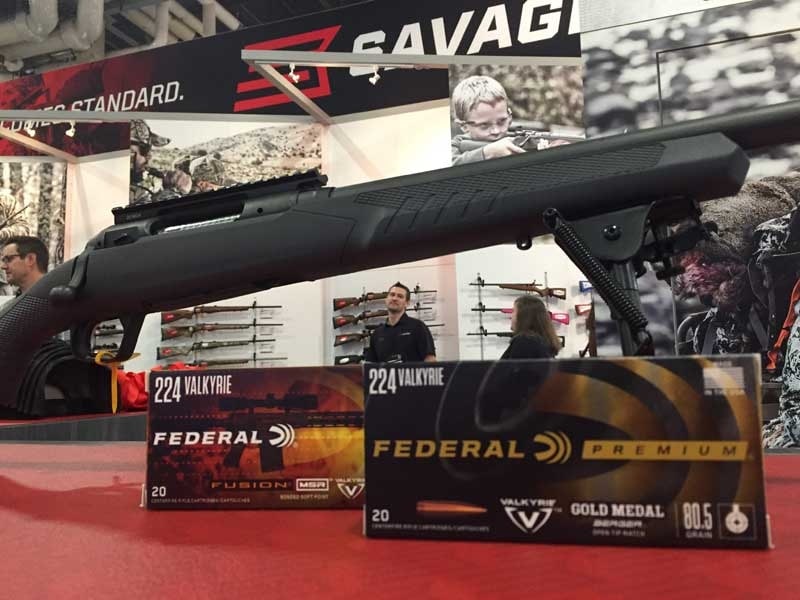 We all knew this was coming. A bolt action rifle in .224 Valkyrie from Savage was expected on the heels of bolt guns in the same caliber by the likes of Masterpiece Arms and Mossberg. The new Prairie Hunter looks understated with its gray and black synthetic stock, but don’t let looks fool you. Like the High Country, this rifle makes use of all things “Accu”—the Accutrigger, AccuStock, and AccuFit system. Furthermore, the threaded 22 inch barrel should be a performer on varmints and predators. 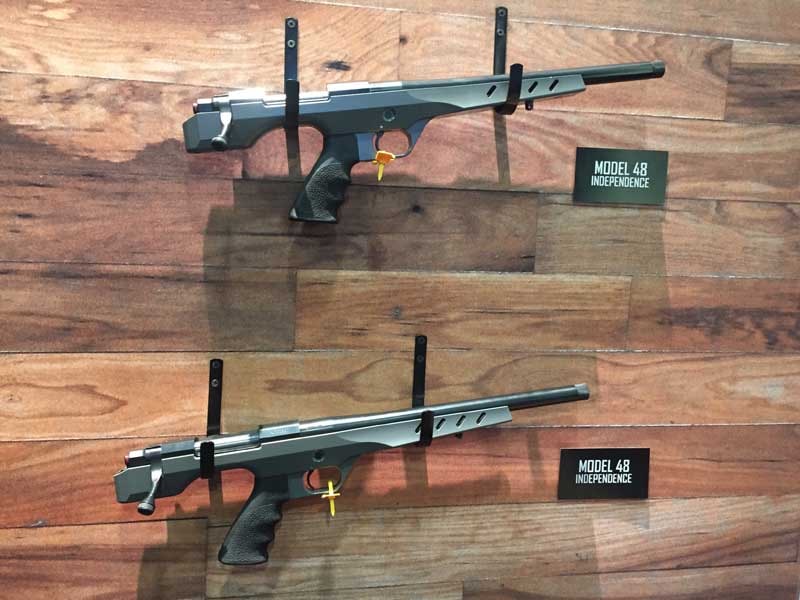 Nosler is breaking new ground with a precision, bolt-action handgun built on one-piece billet aluminum stock. Each single shot handgun is built with US parts by craftsmen at Nosler in Bend, OR.  The 15 inch barrel is both threaded and Cerakoted. Built on the famed M48 short action, the Independence will be available in calibers that cater to both varmint and big game hunters, from .22 Nosler on up to 6.5 Creedmoor and .308 Win. 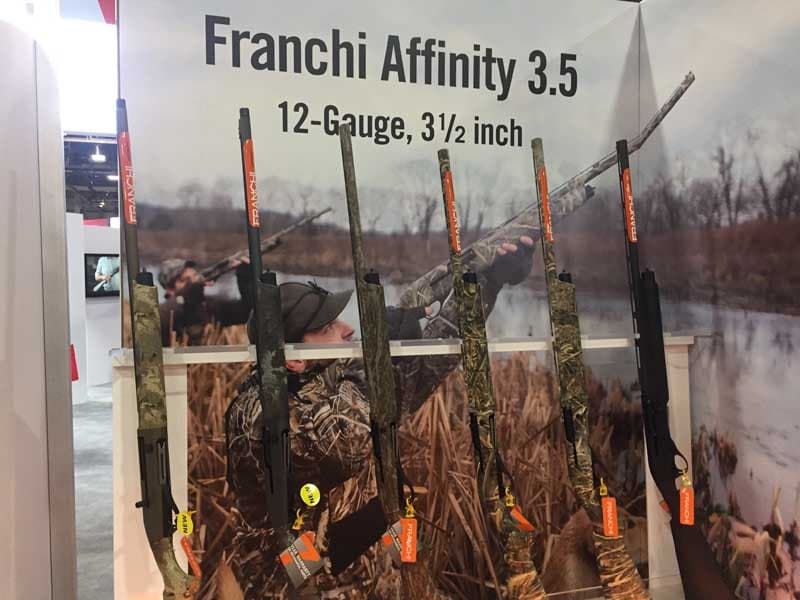 If bigger is better, then the new Franchi Affinity 3.5 is on point. As the name suggests, the 3.5 handles the largest loads, but also easily cycles both 2-3/4 and three-inch rounds as well. Built around an inertia driven semi-automatic system, the scattergun is strikingly similar to the Benelli’s clean cycling SBE.  Initial offerings are all 12-gauge, with both 26- and 28-inch barreled options in either black synthetic or several camo patterns. 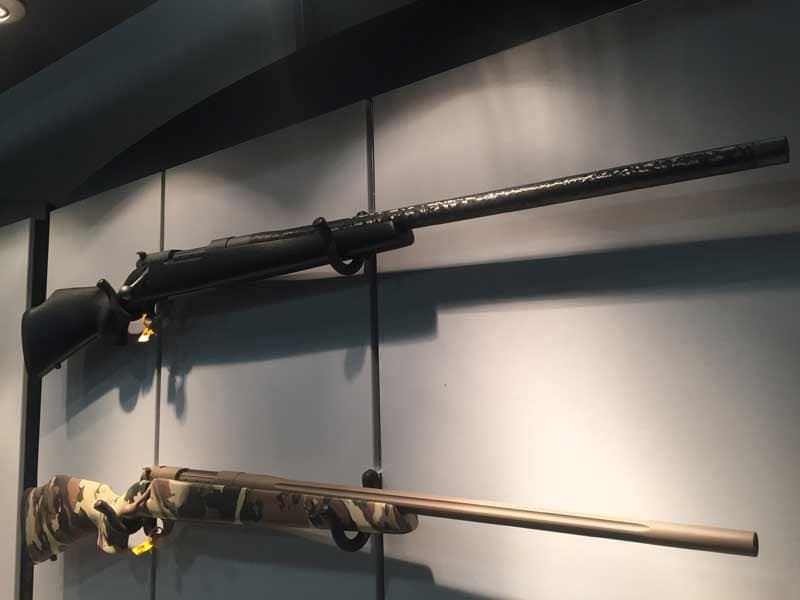 While the biggest news from Weatherby involves updates on the move to Sheridan, Wyoming, the company continues to produce a number of new and interesting rifles.  In addition to an ultra-lightweight Camilla Mark V, one of the most interesting is Mark V CarbonMark. The 26 inch Proof Research carbon fiber barrel is capped with 5/8×24 threads. With its LXX trigger, the CarbonMark comes with a sub-MOA guarantee. The magnum, nine-lug action weighs in at 7-3/4-pounds and is available in either .257 Wby Mag or .300 Wby Mag. 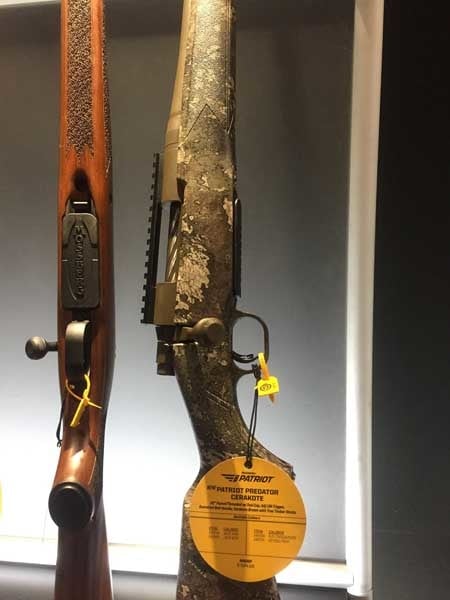 The Mossberg Patriot has been steadily holding its place as one of the best budget hunting rifles on the market. To its fluted barrel, spiral bolt, and Lighting Bolt adjustable trigger, Mossberg adds some great new features for 2019 on the Predator Cerakote model.  The 22-inch barrel is now threaded for suppressors, the receiver gets a picatinny top rail, while all metalwork is covered in Patriot Brown Cerakote with stocks in a handsomely matching True Timber Strata camo.  Current calibers include .243, .308, 6.5 Creedmoor, and .22-250. 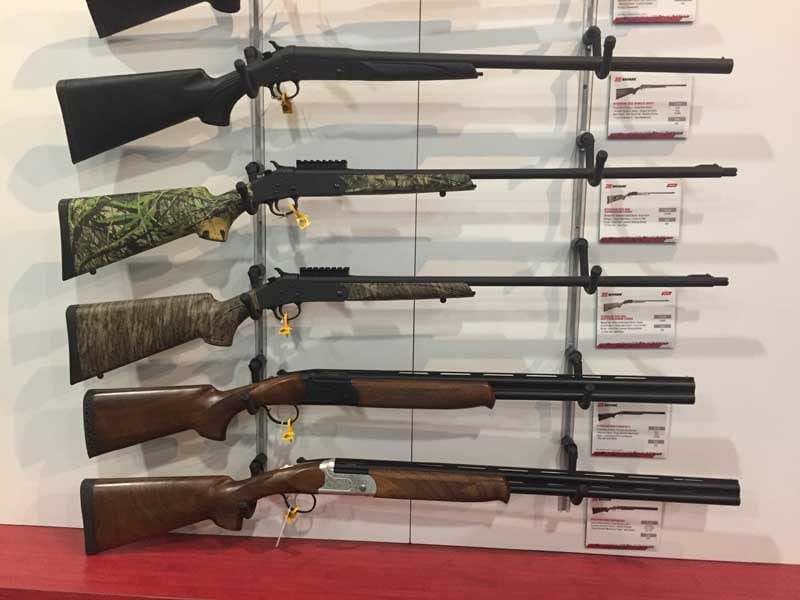 If you feel like déjà vu, it’s because a single shot .410 shotgun is nothing new. However, Vista Outdoor is leading the charge on using sub-gauges like the .410 for turkey hunting, and the Stevens 310 partners perfectly with Federal Premium’s knockout TSS .410 turkey loads. The little 310 wears a 26 inch barrel with an extra full extended choke, ideal for rolling toms with a baby gauge. Mossy Oak Bottomlands or Obsession camo is a nice touch. If you just can’t get on board with the .410 for hunting, the 310 is also available in 20- and 12-gauge, all for budget prices. 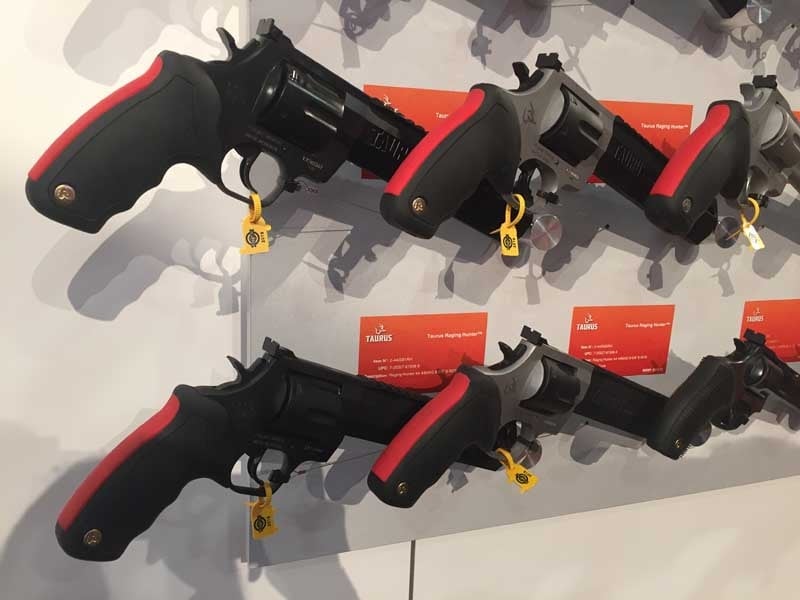 The Taurus Raging Hunter duo of .44 Magnum hunting revolvers have been much discussed but seldom seen. The company promises availability in 2019 of these large-framed six shooters with an 8.38 inch ported barrel.  Both blued and two-tone stainless models are on the docket. The optics-ready picatinny rail makes it easy for hunters to mount optics. The Raging Hunter is one of the few new hunting revolver options in a year dominated by longer-barreled bolt actions. 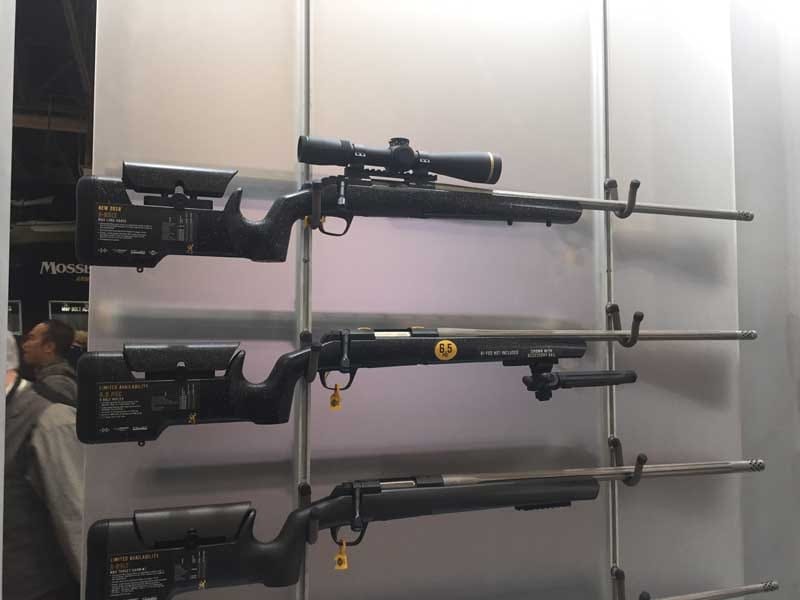 The X-Bolt platform of long range rifles just got even better with introduction of the Max Long Range.  A composite MAX stock features a fully adjustable comb and LOP spacers. The stainless fluted heavy sporter barrels are threaded at 5/8×24 and include a matched muzzle brake. A slim, extended bolt handle is immediately recognizable. The eleven factory calibers include all of 2019’s hottest rounds, including Creedmoor, PRC, and Nosler options. 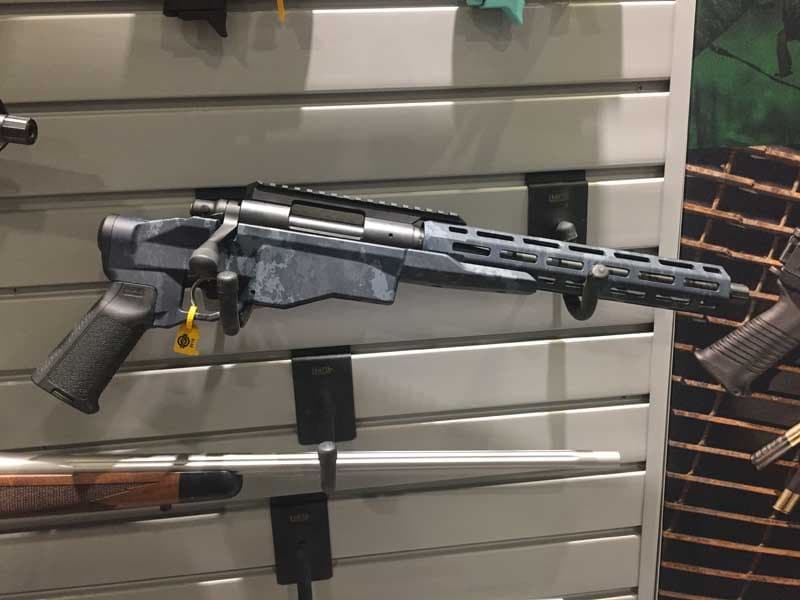 The Nosler Independence may turn more heads, but the Remington 700 CP deserves a look as well. The bolt action has a threaded 10.5 or 12-inch barrel finished in black Cerakote. An X-Mark Pro adjustable trigger comes standard, as does an M-LOK forend. This chassis pistol ships with a ten round magazine in three calibers: .223, .308, and .300 Blackout. Because its marketed as a long range and hunting handgun, we’d like to see a few more calibers offered in the future.