GTGConsult teams up with RE Factor tactical to bring its Baseline Targets to U.S. consumers, making it easier for recreational shooters and professional to make the most of their range time.

The Baseline Target features many individual target zones and a single target that can be used for roughly 200 to 250 rounds of plinking before needing to be swapped out for a new target. 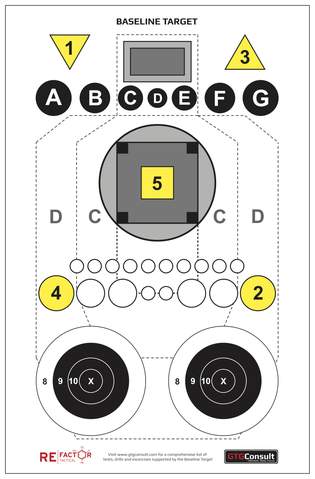 “The GTG Baseline Target was designed to make it easier for recreational shooters as well as professional users to be efficient on the range, minimizing time spent on pasting targets while still upholding shot accountability and the ability to score,” the company said in a news release.

In addition to the targets, GTGConsult also brings a number of drills, exercises and tests to the table. Developed by firearms trainers, the drills can all be used alongside the Baseline Target. Known as the “Drill Cards” these training exercises are available as downloads via the company’s website. GTGConsult said drills are added regularly to ensure shooters get the most out of their training.

The Baseline Target retails for $2.50 for one target, reducing in price based on the number of targets purchased.