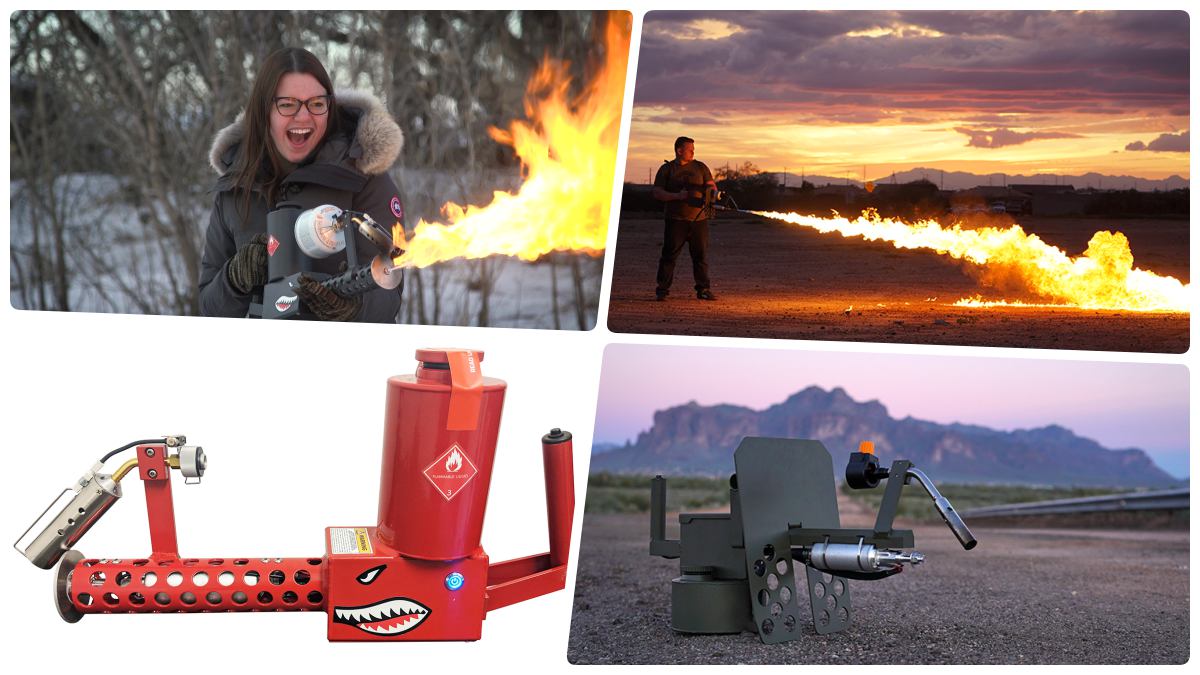 The new XM42 Lite, left, is the more mature of the two new flame devices while USF’s LRT, right, is more of an initial offering from the company.

For those looking to cast a little flame without lugging a lot of weight around, the consumer flamethrower market is responding. This month is set to debut the new XM42 Lite device while U.S. Flamethrowers said they are close to doing the same with their LRT, or Long Range Torch.

The original XM-42 was built by Detriot-based Ion Productions is by far the more recognized player in the flame game, staking their place in 2015 after they raised $50,000 overnight through crowdsourcing to move what they billed as the “world’s first commercial handheld flamethrower” into production. The Ion Productions Team went out of business in mid-2018 due to funding issues and their longtime distributor Roughrider Arms/Prepper Gun Shop now owns the XM42 product line. The new XM42 Lite is just 9 pounds and 26.6-inches long. Available in red or black, the device is billed as “party sized” and is legal everywhere but California or Maryland. Price? $599 regularly but is currently listed as $499.

USF is newer to the game and was planning a crowdsourcing campaign of their own to launch this week for the LRT but have since switched gears and is now looking to enter the market “even sooner.” The LRT generates a 25-foot stream using a high-performance electric fuel pump powered by a rechargeable lithium-polymer battery and a non-pressurized reservoir.

The start-up says the flame device offers a “compact solution for the U.S. Forestry Service, firefighters, and agricultural workers, whose duties can include facilitating controlled burns of property,” while consumers can use it for such tasks as lighting bonfires and melting snow. Their price is listed as $549 with a planned $499 “early bird” preorder.

This article has been updated from the original to reflect that Ion Productions exited the industry last year and the XM42 line has changed hands.