TacPack serves up gun gear each month with subscription 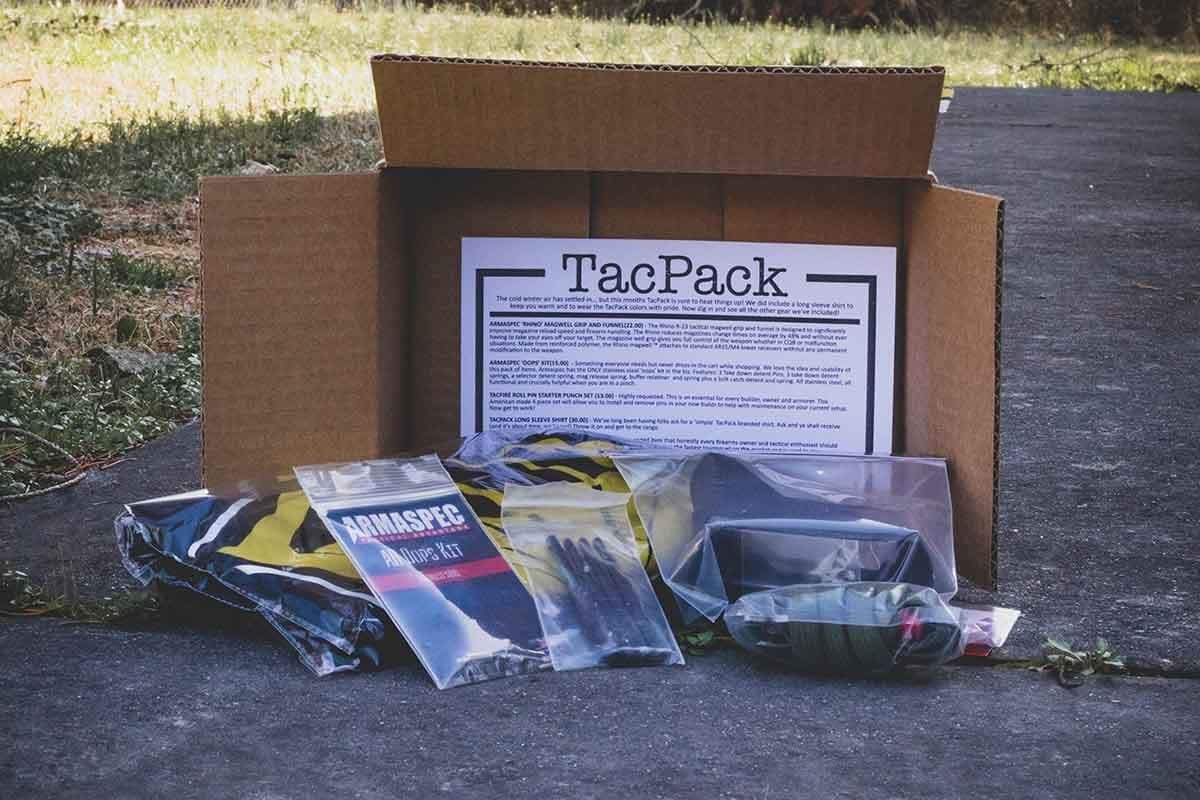 The TacPack is a monthly subscription box packed with gear. (Photo: Jacki Billings/Guns.com)

Putting the gun back into mail, TacPack equips gun enthusiasts with all sorts of tactical, EDC and survival gear. A subscription-based service, TacPack sent Guns.com its February box and we dove right in to find out whether this subscription is worth its monthly fee.

TacPack is a monthly subscription service, bringing tactical, everyday carry and survival gear to subscribers. Customers pay a flat monthly fee of $49.95 and in exchange receive a box full of goodies delivered to their doorstep each month.

Boxes are pieced together each month by the folks at TacPack to ensure no two boxes are alike and every month’s box is different. TacPack sources products through suppliers, looking for good deals that it can pass along to consumers by way of products. Overall, TacPack contents add up to between $80 and $100 worth of gear.

The TacPack I received arrived in mid-February. Nestled inside the small cardboard box, I found five different items mostly themed around the AR platform. Inside my box sat an Armaspec Rhino Magwell Grip and Funnel, Armaspec Oops Kit, TacFire Roll Pin Starter Punch Set, TacPack shirt and RATS tourniquet. Each TacPack ships with a handy sheet, detailing each part and its MSRP. In total, the parts in my box added up to just under $100 worth of gear.

Aside from the TacPack long-sleeved shirt and RATS tourniquet, the items centered on the AR. The Armaspec Rhino Magwell and Funnel mounts to AR-15/M-4 lowers, requiring no permanent modifications to the weapon platform. The magwell brings faster reloads and better firearm handling to AR-15 shooters, according to TacPack’s handy description of each product. The Rhino Magwell itself retails for around $22. Next up, I pulled the Armaspec Oops Kit out of the TacPack box, revealing a tool kit that offers three take-down detent pins, three take-down detent springs, selector detent spring, mag release spring, buffer retainer and spring in addition to a bolt catch detent and spring. Coming in handy when you, well, have an oops the Armaspec kit’s stainless-steel tools prove helpful to AR-15 shooters who have a tendency to misplace small parts. The Oops Kit features a price tag of $15.

The Tacfire Roll Pin Starter Punch Set is a $13 value bringing an American made four-piece tool set to TacPack consumers. The punch set allows builders and tinkerers to install and remove pins in firearm builds. The Tacfire set offers an MSRP of $13.

The RATS tourniquet was a nice addition to the box. (Photo: Jacki Billings/Guns.com)

Moving away from firearms and into survival, TacPack includes a RATS tourniquet into its mix of firearm tools and parts. The Rapid Application Tourniquet System can be applied to quickly stop bleeding during a massive trauma. The RATS, a popular tourniquet style, delivers a fast deployment with a compact design. The RATS packed into the TacPac comes styled in olive green with a price of $17.

Rounding out the TacPac box, the company included a long-sleeve logo shirt. TacPack said customers asked for a long-sleeve version to show off their loyalty – ask and apparently you shall receive. The TacPack shirt comes with the biggest price tag, listing at $30.

Is the TacPack worth it?

TacPack rounds up interesting gear spanning multiple genres, some of which consumers might not buy if left to their own devices. If you love gear and surprise mail, TacPack provides the perfect solution. With each box different from the last, it’s like Christmas morning for gun enthusiasts each month. For just under $50, TacPack subscribers get $100 worth of accessories and parts – not a bad deal.

The downside, though, is consumers have little control over what they get. In the case of this TacPack, it was alright, but not really geared towards my interests. I’m not an AR shooter by nature, so most of these parts earn a spot in my random firearm accessory drawer. 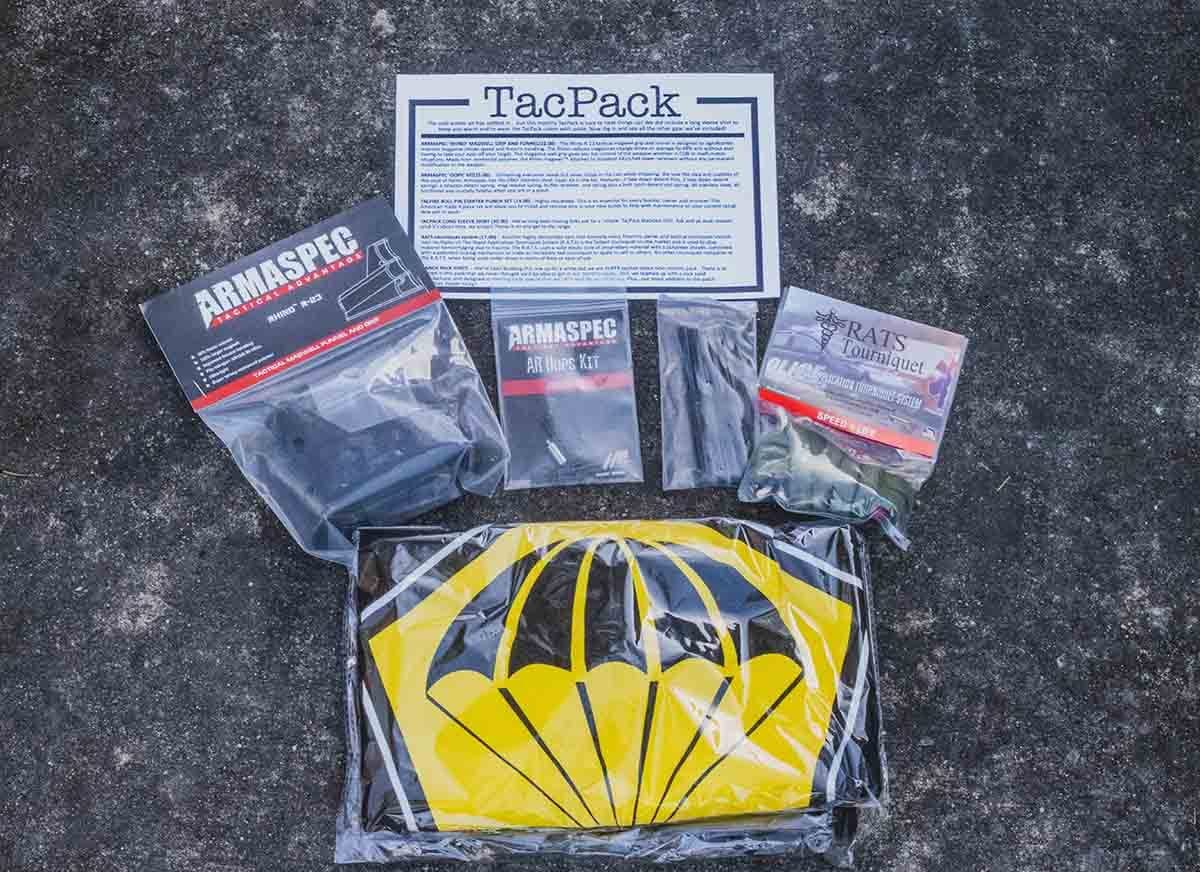 The TacPack ships with a list of items and their pricepoints, all totaling just under $100. (Photo: Jacki Billings/Guns.com)

The RATS tourniquet was a nice addition and is the one piece of gear from the box I can confidently say I will use. The RATS immediately left the TacPack box and found a new home in my medical kit. The shirt was also a nice bonus I’ll use at the range, especially on cooler days as its long-sleeved.

Aside from those two items, the rest of the contents will likely never be used by me, but that’s not a total loss. In the event, I decide to leap into AR-15 builds, I will at least have the basic tools to get started. Alternatively, these items make excellent stocking stuffers or birthday gifts for fellow gun friends. Either way, most consumers will find a use for the gear. 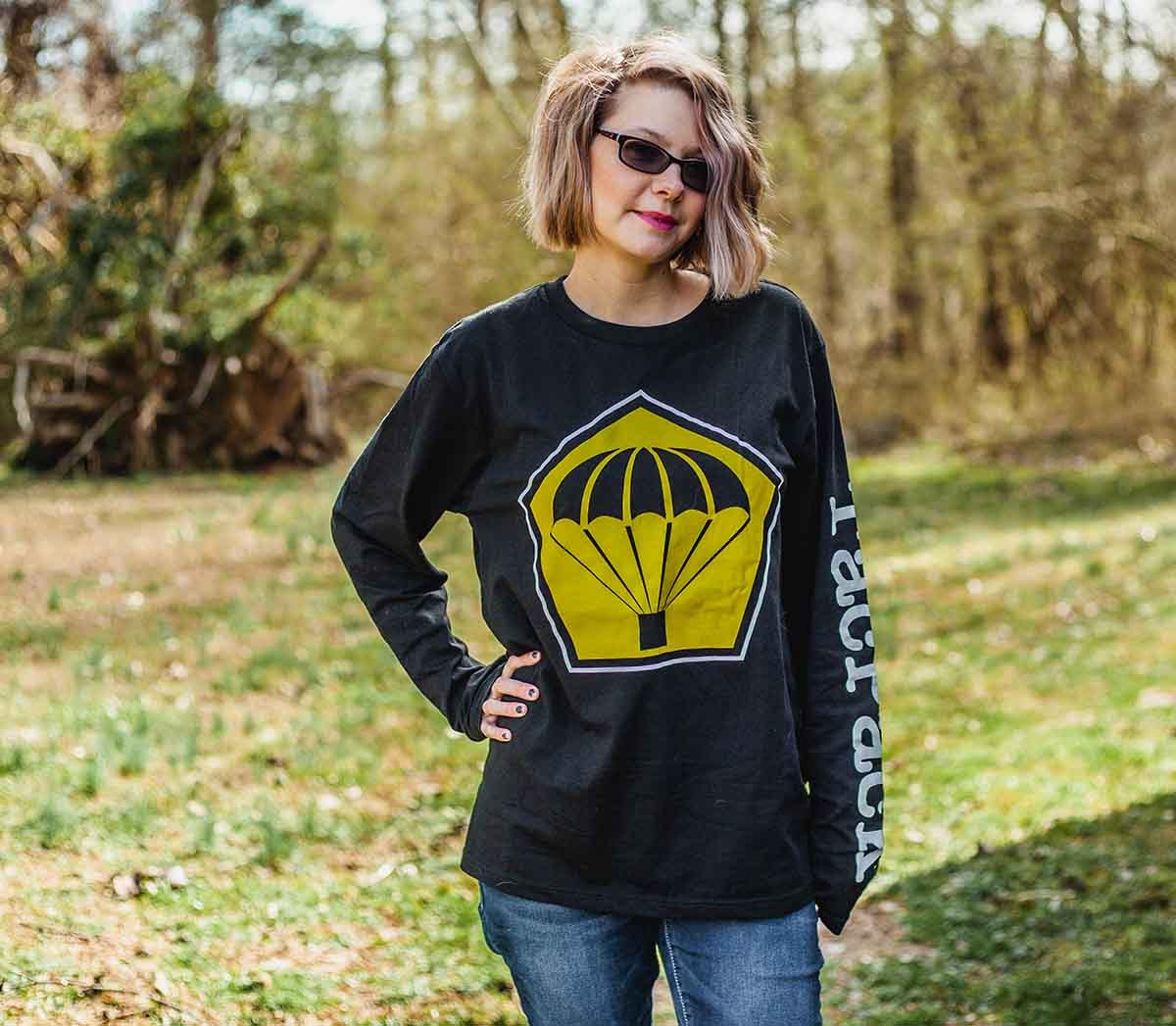 The long-sleeved shirt features the TacPack logo and is well-suited for range day. (Photo: Jacki Billings/Guns.com)

At the end of the day, the TacPack best aligns with consumers who have excess funds or “fun money” to blow each month. For consumers counting pennies, you’re better served buying gear as you need it and with total control over what you’re getting.