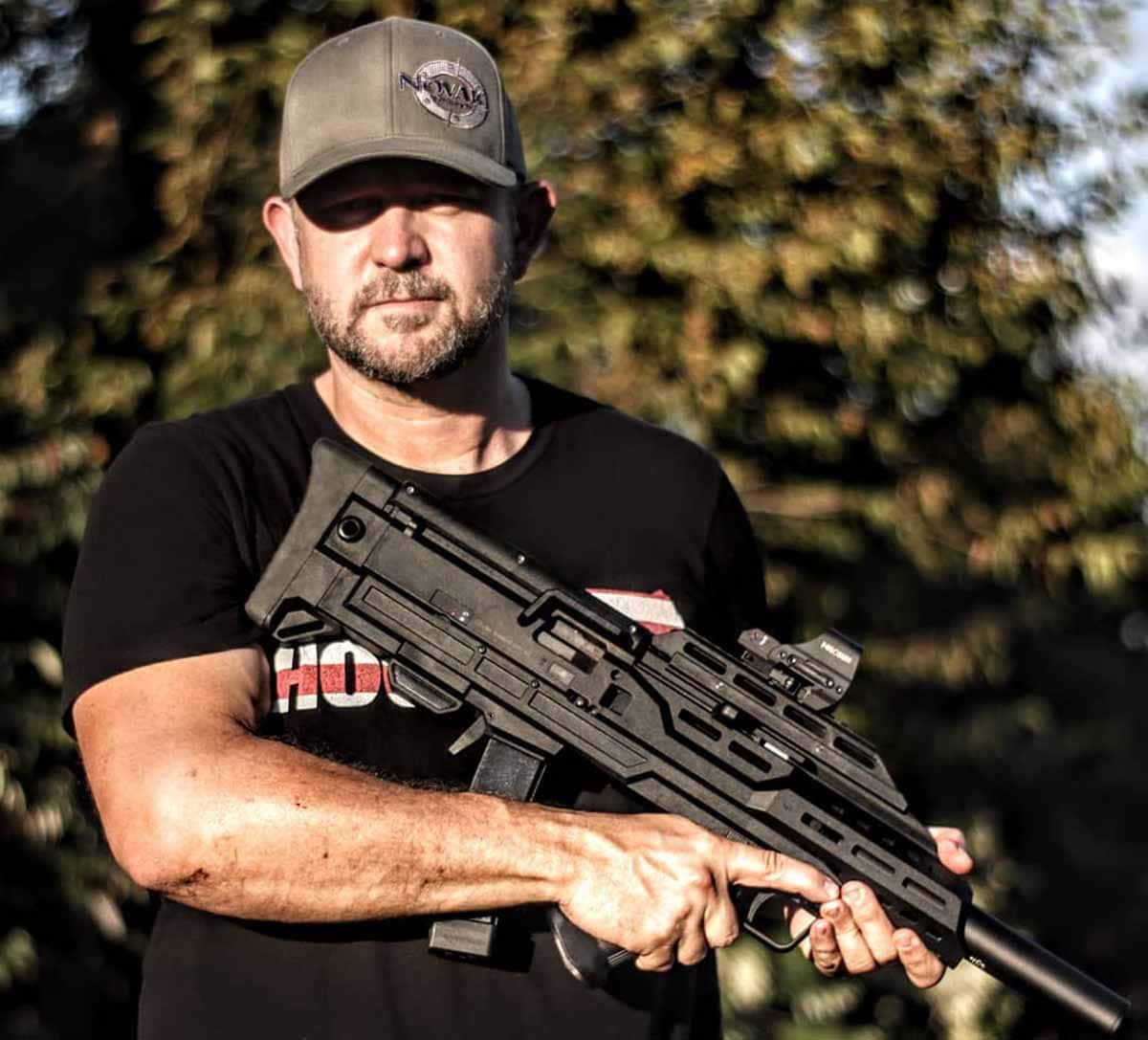 Shawn Herrin, once an IT guy, is now known for his wild and crazy antics on air and off. The host of four popular podcasts on the Firearms Radio Network, Herrin brings his affable personality to the podcast realm each and every week. Guns.com sat down with Herrin to ask him some silly, insightful and somewhat random questions.

GDC: Kicking things off, what was the worst job you’ve ever had?

Herrin: That’s tough for me to say because I’ve always figured out a way to kind of be happy with whatever I’m doing. My history is in software stuff, working in the I.T. world, things like that, but there was a time when I actually worked at a mall selling animal figurines into the night. So I was like doing some data entry work from 4:30 in the morning till 2 in the afternoon and then I went to the mall until 10 p.m. I guess that was the worst job I ever had, but you know I found a way to make it fun and it was silly but it was still alright.

GDC: What’s a weird habit of yours?

Herrin: I am literally addicted to taking like a long ridiculously hot showers. My water bill every month is like ridiculous and I just don’t care. It’s the only time that I get to really relax and not think about anything.

Herrin: A Smith & Wesson M&P Pro with a 5-inch barrel. The fiber optic front side has fallen out of it and I just never even replaced it. It’s absolutely my favorite gun in the universe and it’s just like a 1.0, but for some reason, it and I have bonded and we are besties.

GDC: What was the first gun you owned?

Herrin: Smith & Wesson M&P 40, because I didn’t know anything. I went to the store and they were like “Here try this.” I was like “Yeah, that seems OK. I don’t really know anything.” I took it home and shot it and I hated it. Like, I hate 40. So I returned it and then they talked me into a 1911. Then I decided I should probably figure out what’s going on because this wasn’t going so well.

GDC: Aside from guns and shooting, what’s a hobby of yours?

Herrin: Playing hockey. That’s like my other passion. It’s beer league adult hockey, just get out there on the ice. Score some goals on occasion and just have fun.

GDC: What’s the best piece of advice you’ve ever been given?

Herrin: I never really had like a strong father figure I guess in my life so I didn’t get a lot of advice there. It’s probably from that rap song, that “Stay Humble” rap song. That’s something I hear in my head a lot. Be humble, be kind and just do the right thing. Not normally my type of music but it resonated

GDC: So, if that’s not your usual style of music, what would we find you listening to?

Herrin: I’m fairly varied but I do like heavy metal stuff. I love, you know, 80s and 90s hair metal, but I also like dubstep and EDM. I can tolerate country at times. I’d have to say if there’s like a defining band in my lifetime, the one that I love the most and could always listen to no matter what, it would be Motley Crue.

GDC: If your friends could sum you up in one way, how would they describe you?

Herrin: It was Nov. 14, 2016. It was right after my birthday and a buddy gave me a bottle of whiskey for my birthday. I proceeded to drink the entire bottle during an episode of We Like Shooting and it happened to be episode 171. It’s gone down in lore in We Like Shooting because I was completely blackout, like no humanity in my eyes, drunk and still trying to do the show. It was just a train wreck and a disaster. I woke up the next morning and I wanted to delete it, but it had already taken on like a life of its own so I just embraced it and figured whatever. I guess it’s okay that, you know, hundreds of thousands of people see the most embarrassing night of my entire life. 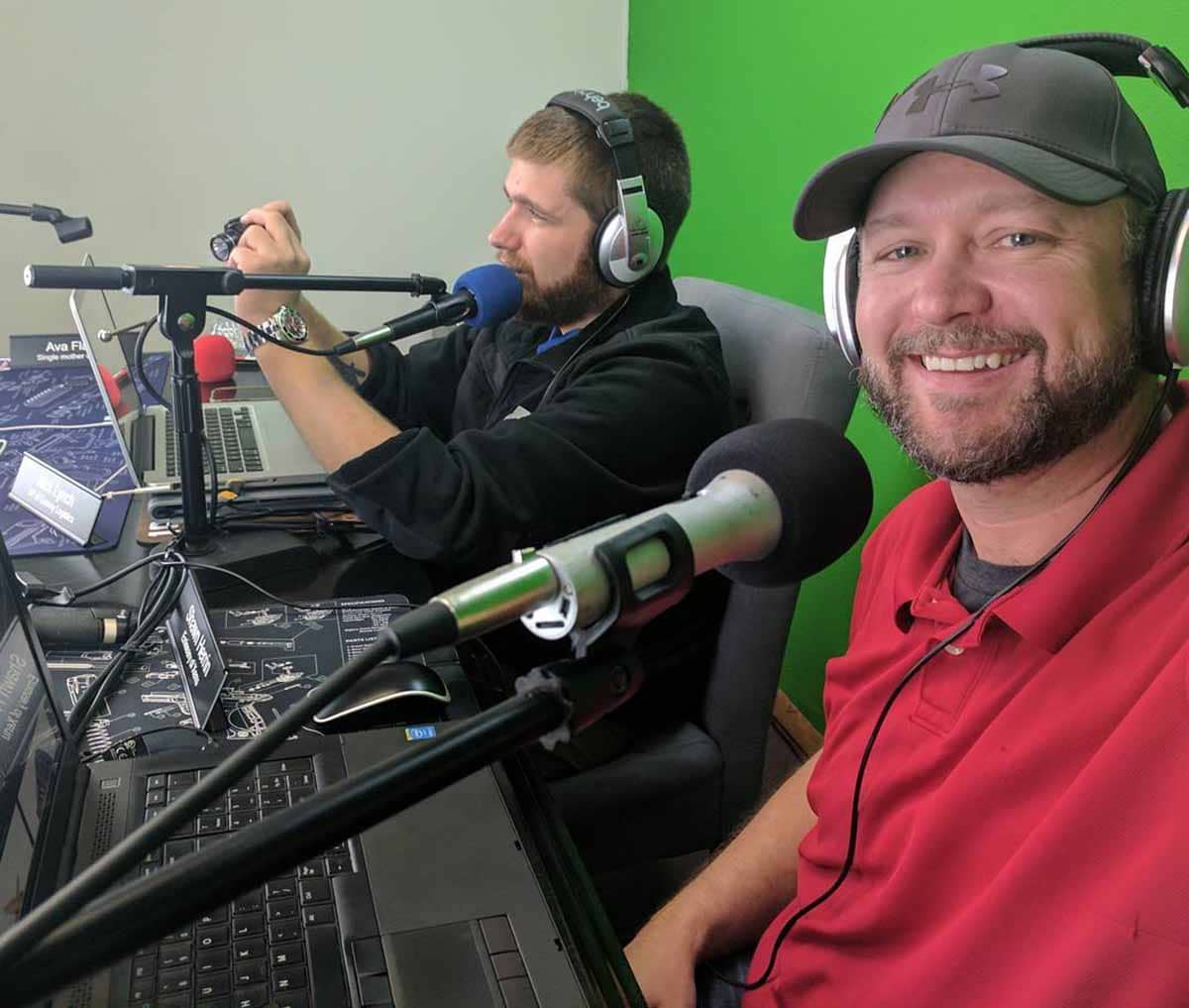 GDC: What is We Like Shooting best known for?

Herrin: When we all travel together, it’s usually Aaron, Jeremy, Nick and myself — Savage doesn’t usually travel much — but one of the things we’re kind of known for is we really like to have fun. We really bring the fun atmosphere to whatever party we’re at. We’re pretty well known for not getting our deposits back.

GDC: What’s a behind the scenes moment that illustrates the shenanigans you bring?

Herrin: Generally it’s shenanigans that go haywire. One time we were staying in an Airbnb and we’re all drinking after hours. I started tormenting and picking on Jeremy, who’s like 6-foot-8 and built like an ogre. I said something to Jeremy that made him mad and he picked me up on his shoulders and started spinning me like a helicopter. He threw me down and I jumped up, pushed him and he went back and broke the wall. We had to pay for that.

Another time we were staying with Faxon Firearms. We were at their Airbnb. Jeremy pushed me over a couch and somehow when he was trying to choke me out, we turned on the gas stove which had a bunch of pizza boxes on it. Those caught fire. Aaron had to jump up and dispose of the pizza boxes.

I know it sounds incredibly irresponsible. We always pay for anything we damage but at the same time, it gives us some stories that’s what our listeners like.

GDC: Zany stories aside, We Like Shooting is centered around interviewing a guest so I imagine after 400 episodes under your belt, you probably have interviewed a good amount of people. What’s your take on what makes an interviewee good or bad?

Herrin: That’s a good question. My favorite interviews are people who can joke with us and can roll with the punches but also dish it out. For me, it’s when you can give a good answer or educate a little bit then throw a jab back at us or something like that.

GDC: You juggle four different shows — We Like Shooting, WLS Double Tap, Gun Funny Podcast and This Week in Guns — how do you manage all that on a weekly basis?

Herrin: Well that’s easy. I work like 15 to 17 hours a day. That’s pretty much it. Actually, coming up in the next probably two weeks, I’m launching another podcast called the Civilian Medical Podcast that’ll be me and Skinny Medic hosting the show.

GDC: That’s exciting! How did that collab come about?

Herrin: I’ve been pestering Skinny Medic for about a year, maybe a little bit longer, to do a podcast. Medical is a huge part of my life so I said I’d do it with him. That way he just has to worry about being himself and not the other stuff like producing or editing. At first, he said he didn’t have time. I hit him up again and he said, “Ok, let’s do this.” That was it. It’s been moving forward since then and I am really excited because he’s a great guy.

Herrin: Really my long term goal is just to make the Firearms Radio Network self-sufficient and kind of help enrich all the people who are part of it. That’s pretty much my main long term goal right now.

To find out more about Herrin and listen to his podcasts, check out the Firearms Radio Network.