When considering feature-rich yet inexpensive handguns, some stand out more than others. Side-by-side, the Rex Zero 1 Tactical and the Canik TP9 Elite Combat rate high on that scale. Both 9mm pistols are imported from overseas and offer a variety of parts and sighting systems that allow personalization.

Both guns are roughly the same size and fall into the compact frame size. The Elite Combat will come with a flush fit 15 round mag and a mag with a +3 base pad for a full 18 rounds. The Zero 1 comes standard with two 17 round mags, which make the grip slightly longer than the Elite Combat. Barrel length on both of these guns are just shy of 5 inches. These dimensions seem to be the sweet spot for the MIL/LEO and civilian consumers.

The Zero 1, imported by FIME Group, has a hammer-fired operating system and has an aluminum frame, a steel slide and steel barrel. Although fired from a double- or single-action trigger, the ambidextrous manual safety provides a de-cocked setting. The textured mag release also offers true ambi controls. Lastly, the features suppressor-height three-dot sights.

The Canik TP9 Elite Combat, imported by Century Arms, has a striker-fired operating system and polymer frame. It comes in a Flat Dark Earth Cerakote. The slide stop is truly ambidextrous and can be released from the either side. The mag release can be switched to the left or the right but is dedicated to a side. The sights have a fiberoptic front and a blacked serrated rear.

These guns are big enough and have enough capacity for duty but also are compact for the concealed carrier out there. 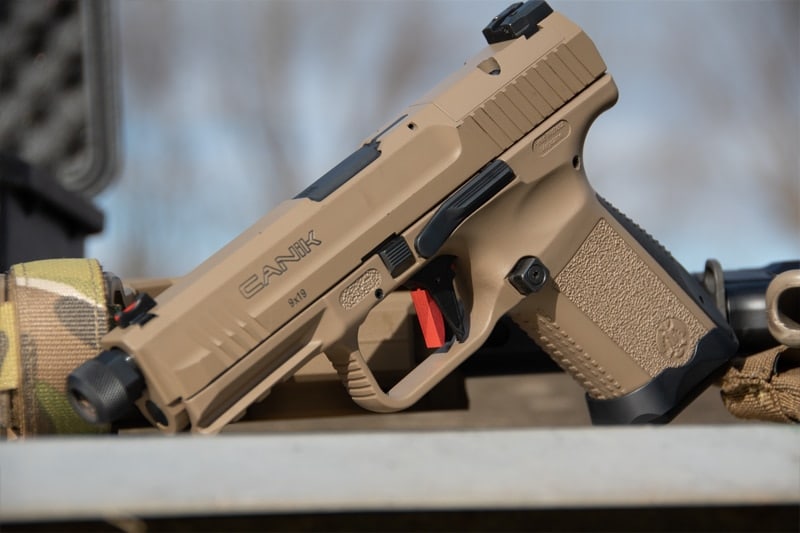 Canik’s TP9 Elite Combat is a polymer framed striker fired pistol. It comes in a Flat Dark Earth Cerakote. The slide stop is truly ambidextrous and can be released from the either side. (Photo: Ben Brown/Guns.com)

Fitting into current trends, both pistols come optic ready. Just install the provided mounting plate that correlates with the micro red dot that you have. This takes away the headache of having to send out your slide to get milled and re-coated. The Zero 1 mounts the optic between the rear and front but the Elite Combat unfortunately removes the rear sight to install an optic. This eliminates the use of “backup” irons which might be a big deal to some.

Both handguns also come with threaded barrels so that you can mount your favorite suppressor or compensator. But there is one aspect about the Elite Combat barrel that has me scratching my head. The Elite Combat has a 13.5x1mm left hand thread pitch which makes it virtually impossible to mount anything to it without an adapter. The Zero 1 has a standard 1/2×28 right hand thread pitch. 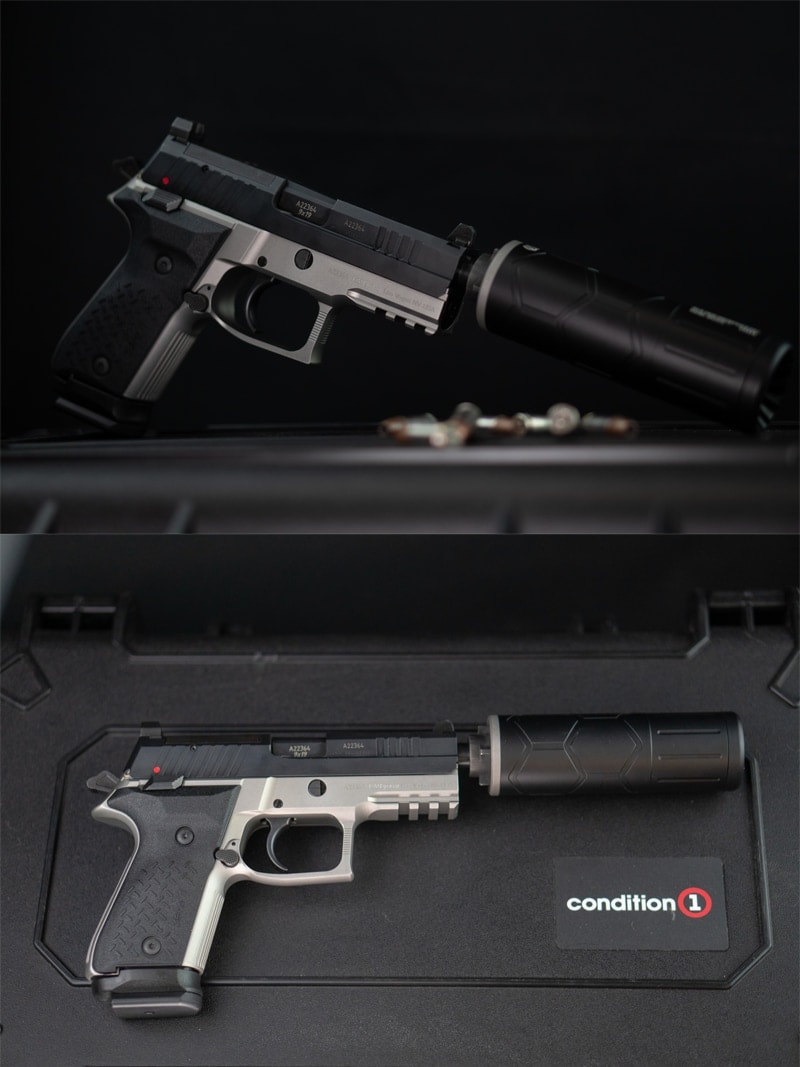 The Zero 1 comes standard with two 17 round mags which makes the grip slightly longer than the Elite Combat. Barrel length on both of these guns are just shy of 5 inches. (Photo: Ben Brown/Guns.com)

Shooters always appreciate a good trigger. Not having to tweak or alter the stock trigger to improve it makes life so much easier. The Elite Combat might have the best stock trigger I have ever felt. It is listed as a 4.8 pounds pull weight but it is the short take up and reset that is really impressive. In addition the trigger has a wide flat face that is machined out of aluminum. The double action on the Zero 1 comes in a not too hateful 13 pounds. At 5.5 pounds the single action trigger pull had some take up but hit a defined wall and broke very clean.

Some other features that deserve to be mentioned are the interchangeable mag release sizes and the aluminum flared magwell on the Elite Combat. Also included with the Elite Combat is a holster which may not be the best design ever conceived but it does give you something to use immediately after you purchase the gun.

When it comes down to it

Both the Zero 1 and Elite Combat’s price point are going to come in right around the $850 mark. That is a really great price when you consider all the features you are getting with each pistol. There is not much I would add or take away from either of these packages. If you are an individual that typically adds a lot of the extras seen on these two guns you will probably end up saving money.

Add a good holster and these two handguns could immediately be used for competition or concealed carry. The Elite Combat would be a more attractive option for concealed carry because of its lighter weight. I personally would love to run the Zero 1 in competition. It would be a great gun to try out the single/double action life style. Either way I enjoyed shooting both of these guns immensely and its great to see manufacturers offering this kind of value to the consumer.