The crafty engineers at Heckler & Koch came up with a special briefcase in the late 1970s for those looking to bring a little MP5 with them without drawing too much attention.

Termed the “Spezialkoffer” or Special Case in its briefcase format and “Spezialtasche” or Special Bag in its satchel version, the contraption over the years has generally just been called the Operational Briefcase.

The case version used a solid polymer and aluminum box with a thin plastic lid. Roughly 20x15x5-inches, it was the same general envelope as a technician’s toolbox or a businessperson’s briefcase. The fist that fits inside the glove of the briefcase is the HK MP5K submachine gun held in place by a claw mount.

The “K” is the shorty version of the classic MP5, weighs just 4.4-pounds, and is 12.8-inches long overall with a 4.5-inch barrel. It is much zippier than the standard MP5s and has a cyclic rate of 900rpm. This meant it could drain a 15 or 30-round magazine in either one or two seconds respectively.

Unseen in the best places for the past 40 years, these select-fire man bags have reached a sort of cult status with collectors and NFA enthusiasts.

Not to be outdone, the KGB put together thier own version in 1980, rumored to be used during the Moscow Olympics. In true Russki fashion, they substututed a Kalash for a German room broom.

There is also a MAC-10 homage floating around Texas somewhere.

As well as a UZI version:

For reference, HK still sells such cases today on their German website, for the MP5K PDW and MP5KA4. Of course, all NFA rules apply. 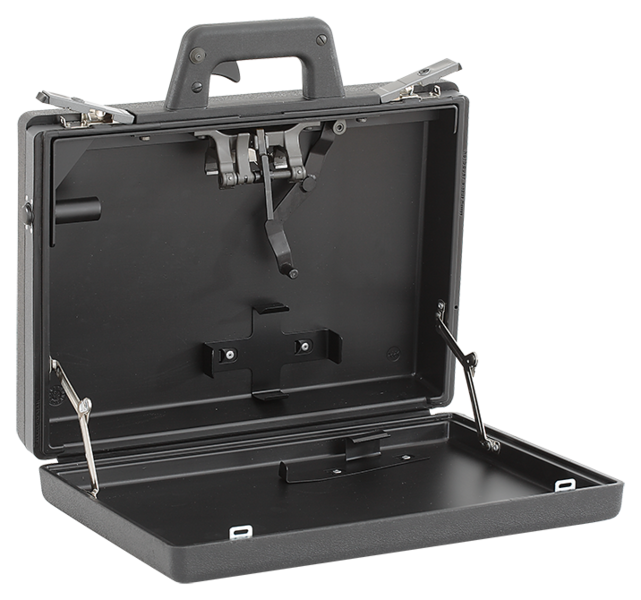