In honor of Patriots’ Day, let’s take a minute to celebrate what is generally considered the first American machine gun that didn’t have a hand crank — the Colt Potato Digger.

Designed in the 1880s by none other than John Moses Browning (who went on to craft several other machine guns to include the M1917, M1918 BAR, M1919 and world-famous M2 BMG), the “Potato Digger” got its name from its peculiar operating lever that visibly travels while the gun is being fired — which would connect to the ground if the gun was not mounted high enough. In essence, it is a gas-powered lever-action belt-fed machine gun capable of firing at about 400 rounds per minute.

Patented by 1895, Browning shopped the gun to Colt extensively and it was put into production by the Connecticut gun maker that year as the M1895. In a nod to the inventor, these early guns are marked “Made under Browning Patent By Colt Pt FA Co.”

Weighing in at 35 pounds, it was still heavy compared to the machine guns of today but was much lighter than earlier Gatling guns and Sir Hiram Maxim’s water-cooled machine gun designs of its era. As such, it was the first full-auto weapon adopted by the U.S. military when the Navy picked up a few of the guns for use by ashore parties landing from warships to converse with the locals. 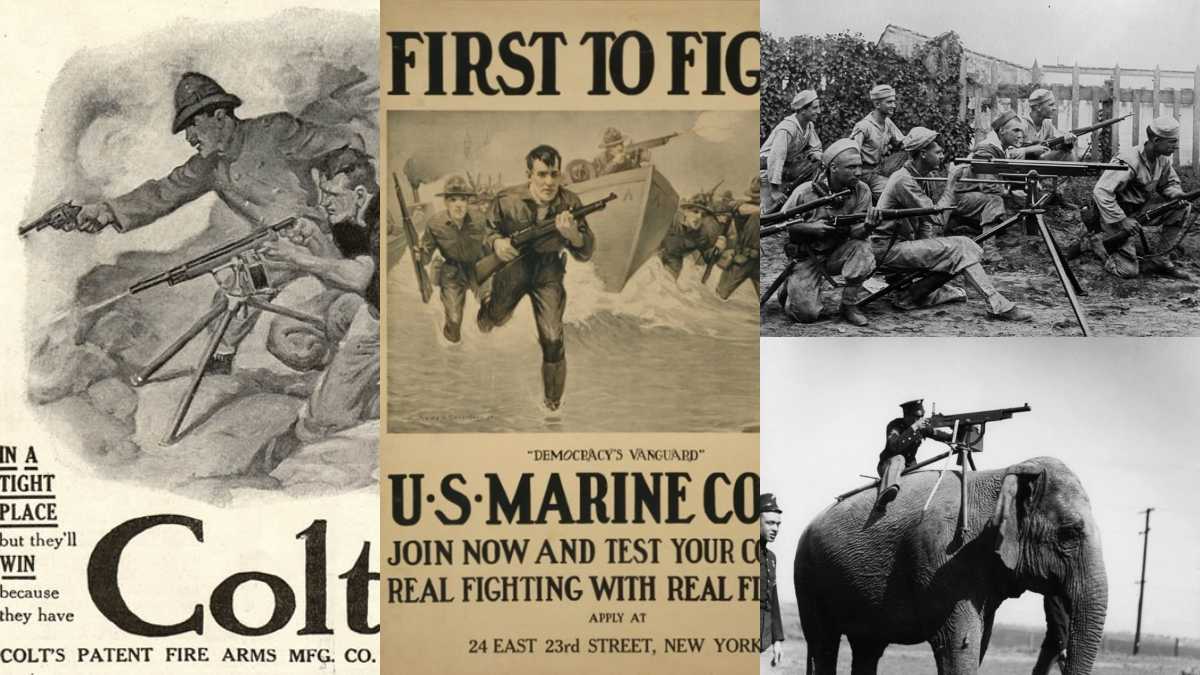 The Colt 1895, 1895/14, and later Marlin 1917/18 versions of the light machine gun saw limited service with the U.S. military as well as overseas allies (Photos: Naval Historical Command/Library of Congress/National Archives)

Chambered in 6mm Lee — then the same caliber the Navy and Marine’s standard rifle was in — the M1895 saw service in the Spanish-American War with U.S. Marines in 1898. With the National Firearms Act then far into the future, a pair of Potato Diggers were even privately purchased by then-Colonel Theodore Roosevelt’s Rough Riders in 7x57mm for use in the conflict. It should be noted that the regular Army at the time still used Gatling guns (which were also made by Colt!).

To get an idea of how the Navy and Marines used the big Colt M1895 on landing parties, check out this footage from the 1975 Sean Connery film, The Wind and the Lion, which shows a dramatized account of such a detail at work in 1904 Morocco.

The Army later bought more than 2,500 Marlin-made (yes, the lever action rifle maker) M1917/18 Potato Diggers for use in early tanks and aircraft during World War I.

Further, the gun proved popular with overseas customers, being made for the Tsar of Russia in 7.62x54R, the Italians in 6.5mm Mannlicher–Carcano, and British Commonwealth forces in .303. This kept the gun circulating the globe in former colonies of those countries well into the 1960s, where they were still photographed in use by rebels in both Yemen and Africa. 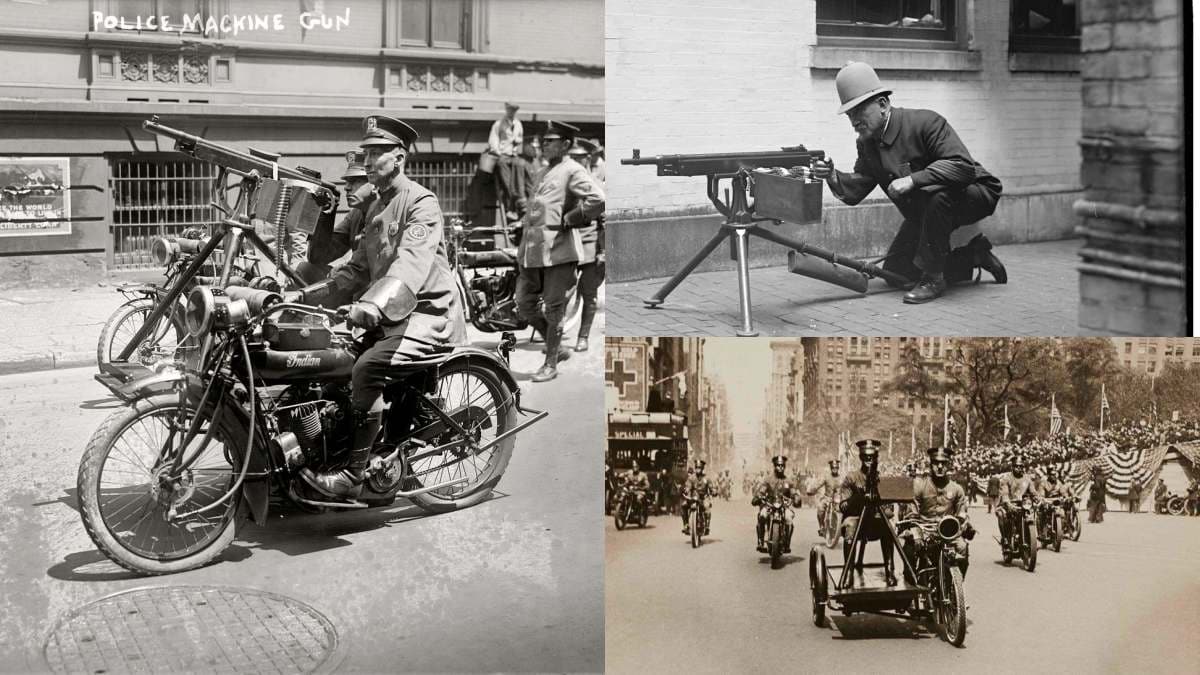 In addition, many police departments either bought their own or inherited WWI-era guns. (Photos: Boston Public Library/NYPL/Library of Congress)

Today, transferrable examples of these classic early machine guns, which have not been in production in 100 years, run about $20,000.

Still, it is an iconic part of American history. 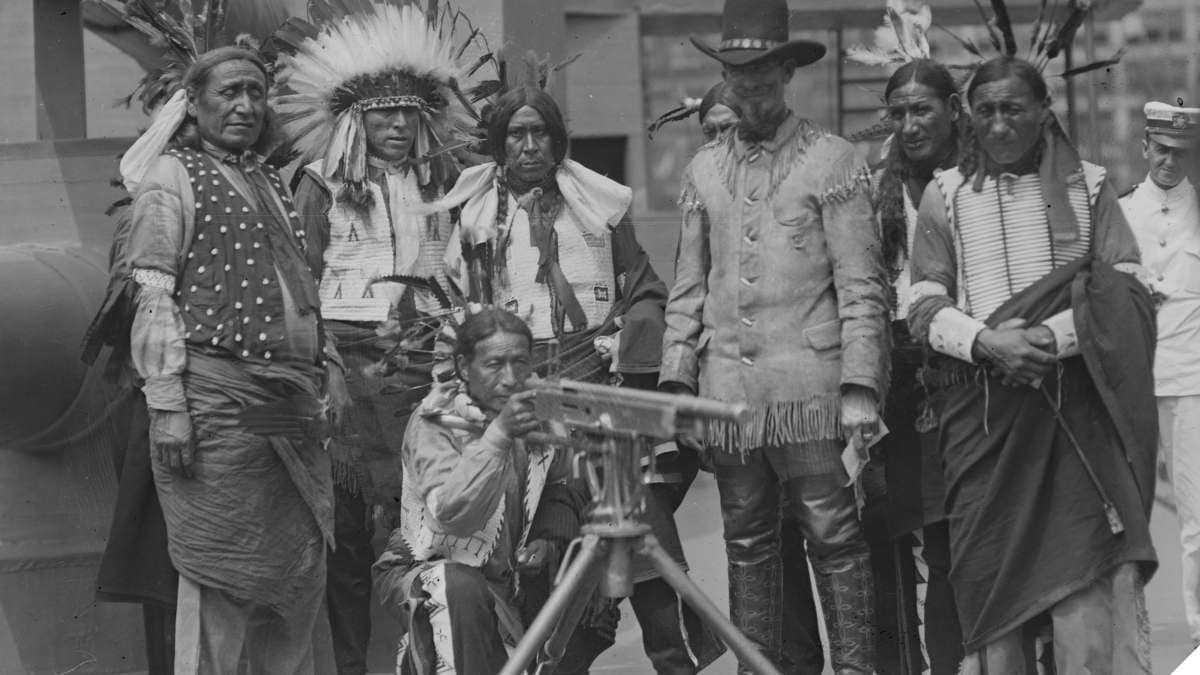