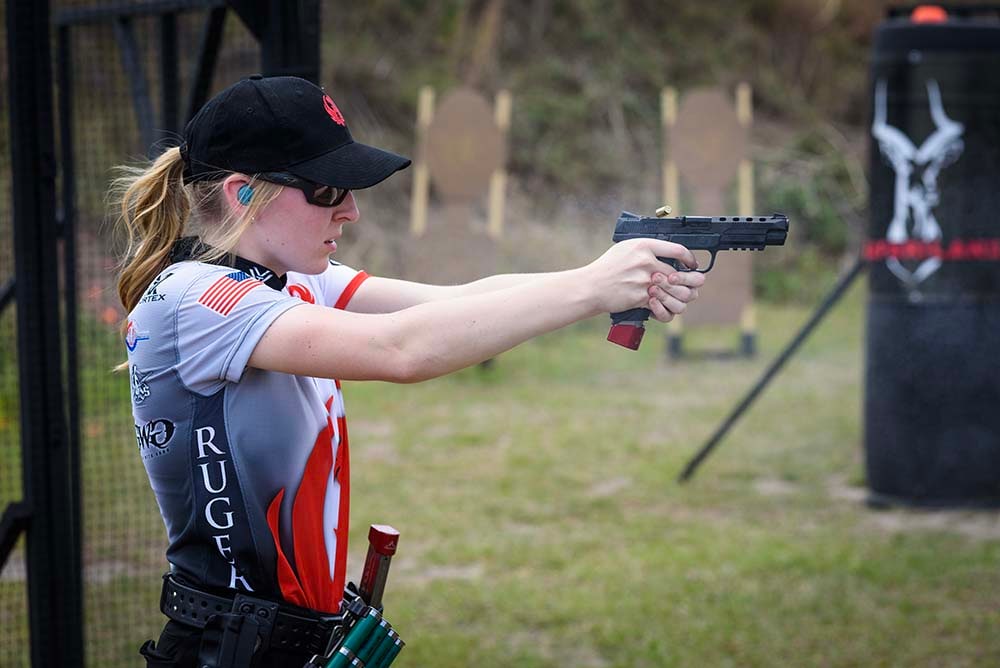 At 17 years old, Beth Walker has already taken the competitive shooting world by storm. As the youngest member on Team Ruger, Walker’s blazing speeds paired with her accuracy on the range have made her a tour de force in the multi-gun universe. Guns.com sat down with the Walker to talk Ruger, competition and how she balances life as a teen competitor.

GDC: What age were you when you started shooting?

Walker: The first time I shot a BB gun was probably between the ages of six and seven. As far as (becoming interested) in competitive shooting, I was in the sixth grade. We’re a firearms friendly family and my dad is a law enforcement officer and it really was a part of our family. We have a lot of family members that are into hunting or in the military or law enforcement.

GDC: What spurred the decision to compete?

Walker: I got a really severe concussion in fourth grade and then two years later I got another one and I was prohibited from competing in contact sports. At that point, when I was laid up with my second concussion, I saw Katelyn Francis,  one of the first female junior shooters ever. I found her on YouTube and thought that was something I really wanted to pursue.

A few months later while at the NRA Annual Meetings in Indianapolis in 2014, I met a few people that sparked my interest even more. Two years later, I met TacTissy and she introduced me to the sport of 3-Gun.

GDC: Very cool. You mentioned 3-Gun and that really seems to be your jam. What about this style is most appealing?

Walker: What I find so appealing is the diversity of the competitors and the stage design. With a lot of sports and especially in some shooting sports, it’s the same thing over and over. With 3-Gun there’s so much contrast from match to match, stage to stage. You see elements like terrain playing into it. Down south there’s a lot more rough terrain while up north you’ll see more bay style matches. There’s also the people. The youngest kid I’ve seen competing in 3-Gun was seven and the oldest was probably in her late 80s. The diversity is just amazing. 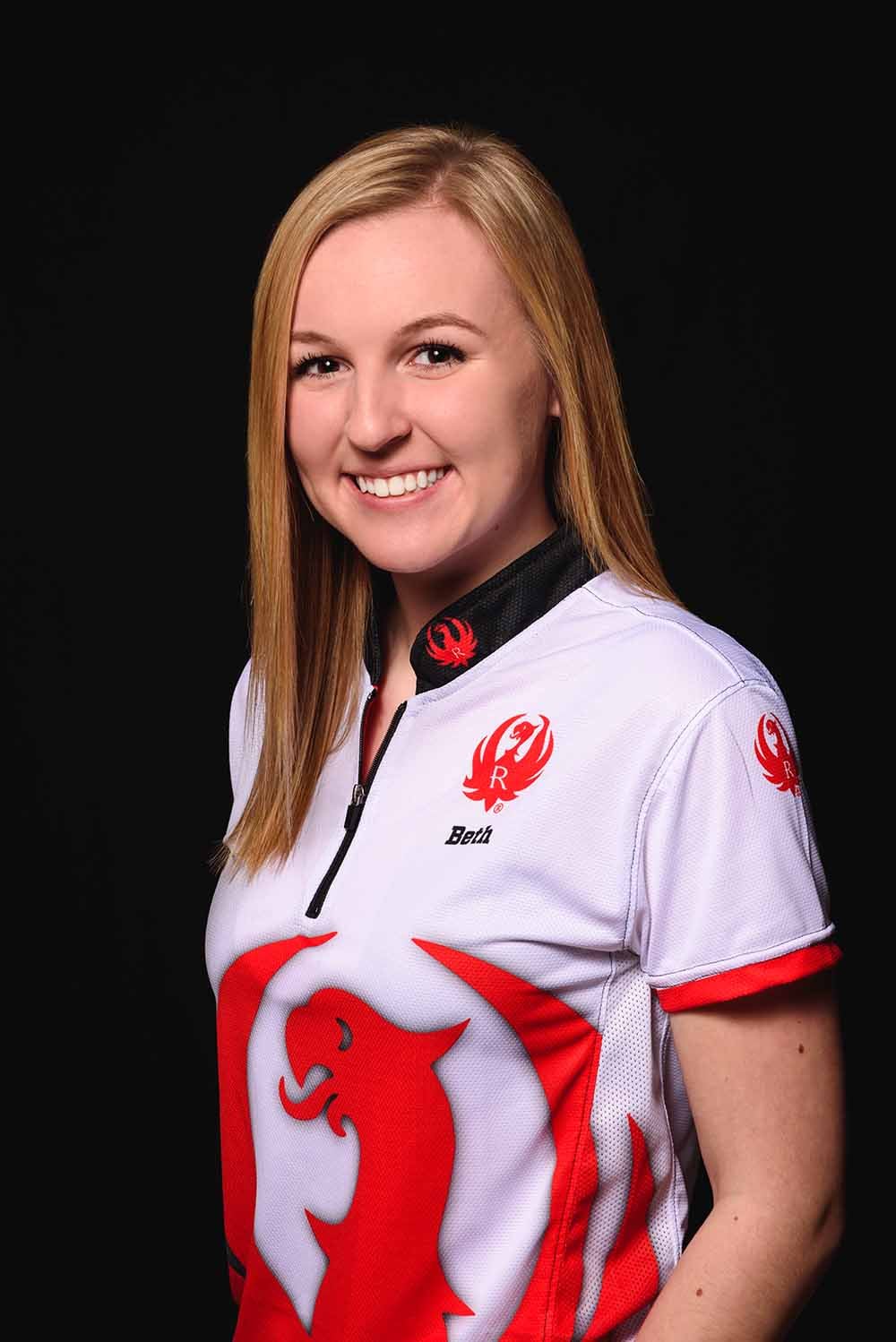 GDC: It seems like a very diverse arena. So you’ve been crushing the 3-Gun game and, obviously, Ruger took notice. How did that partnership evolve?

Walker: I am sponsored by Girls With Guns clothing and they’ve been partners with Ruger for years. I was introduced to some of the people at Ruger with no expectations of anything happening. I didn’t foresee them putting together a shooting team or anything but halfway through last year, we started talking. They introduced me to Doug Koenig, their team captain. The groundwork started from there for this team.

GDC: How did it feel to hear the official news that you were a Team Ruger member?

Walker: This was the goal: to get to a major firearms manufacturer because I want to do this as a career. It was extremely overwhelming. I’ve been familiar with Ruger firearms for years. One of the first guns I ever shot was one of the Ruger 22 pistols. Ruger’s just something that has been a part of my life for so long. Getting to partner with a company like that is overwhelming. I’ve had moments where I just kind of step back and think how blessed I am to have this opportunity. Opportunities like this don’t come around every day.

GDC: You’re working with some iconic shooters, most notably, Doug Koenig. How does it feel to work with a shooting icon?

Walker: Doug has always been a mentor to me because he’s so iconic in the shooting community. He’s someone I’ve always looked up to and so being able to have back and forth conversation with him as a teammate is just amazing.

GDC: It’s especially interesting that you are the youngest person on this team. In fact, you’re the only youth shooter. So what are some challenges teen competitors face that you think most adult shooters don’t?

Walker: Well, I would say probably the biggest challenge is dealing with peers in schools, especially after the Parkland shooting. I go to online school now but I was in public school when (Parkland) happened. There’s been a lot of negativity that affects us junior shooters in a very deep way because we do go to school every day. I have gotten backlash for being a young person who knows how to handle a firearm.

Junior shooters have to be willing to educate other people because we have a platform where people aren’t expecting us to be involved in something like this. We’re not crazy and we are educated and we are all about safety. So yeah, I think that’s very unique to junior shooters.

GDC: It’s interesting that you hit on the negativity surrounding junior shooters because as a youth shooter you are proving that kids can be responsible with firearms.

Walker: I went to public school and there are kids that I would not trust with a firearm but looking at the maturity level of kids that have been brought up with guns and taught to respect firearms — it’s different. I am involved in several advocacy groups and I’ve been to D.C. twice and spoken with legislators. I want them to see a 17-year-old who competes in the shooting sports and understand what is so special about it. It affects them more than we think.

GDC: So what’s your message to other teens who want to pursue competitive shooting?

Walker: It feels like a very daunting process and it’s a huge investment but I will say it will never feel like the right time to do it, so just go out and shoot a match. That’s the beauty of our sport, you just have to dive head first into it. Take a leap of faith. Find matches in your area, connect with other shooters on social media. Reach out to fellow shooters. We’re a community and we want to help grow the sport.

Something very unique to competitive shooting is the willingness of others to help. You can watch a competitor crash and burn on a stage and they’ll walk up to you afterward and tell you exactly how to beat them. They’re very supportive and just want to build that next generation.