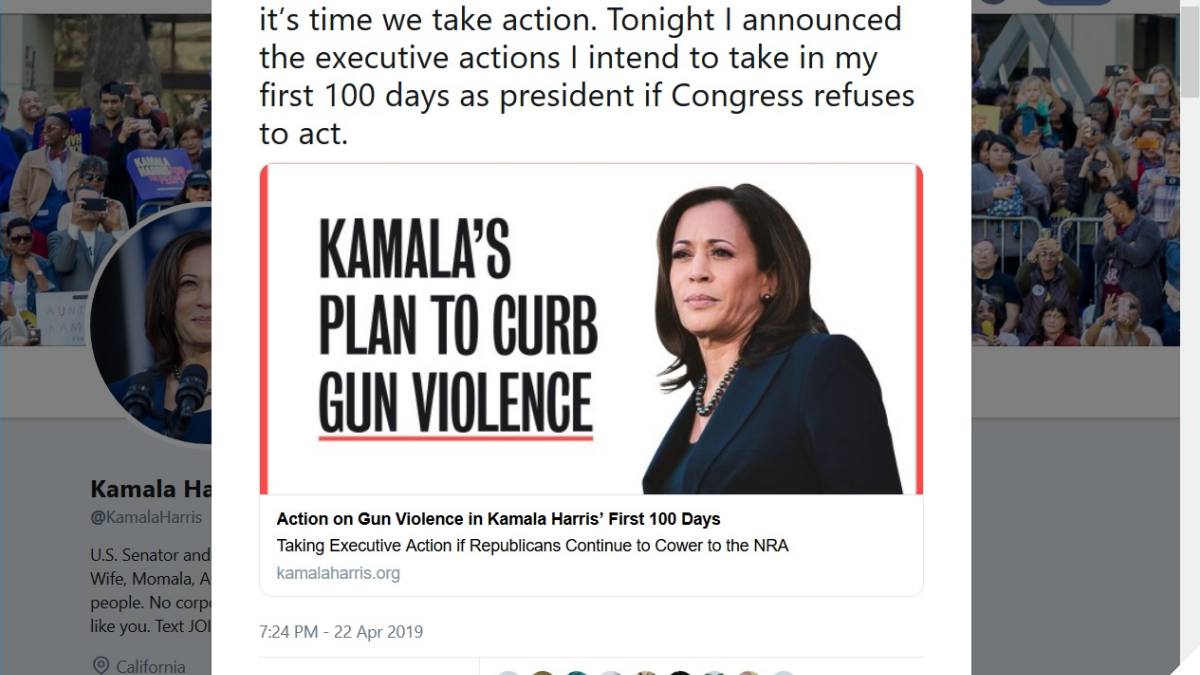 California Democrat Kamala Harris on Monday night promised to take executive actions on gun control should she make it to the White House.

Harris, formerly California’s Attorney General, moved into long-time gun control champion U.S. Sen. Barbara Boxer’s seat in Washington in 2017 and is now part of a growing field of Dems running for President in 2020. The candidate spent part of the hour-long town hall event on CNN this week talking about gun politics.

“Upon being elected, I will give the United States Congress a hundred days to get their act together and have the courage to pass reasonable gun safety laws,” Harris said. “If they fail to do it, then I will take executive action.”

Backing up her rhetoric with a prepared agenda on her campaign website that cited statistics largely provided by gun control groups, the Senator outlined her promised actions. Her Oval Office-directed push would expand background checks to cover private gun transfers, gut legal protections against frivolous lawsuits directed at the firearms industry, expand the pool of those liable to lose their Second Amendment rights, and institute a fine system of up to $500,000 against “law-breaking gun corporations.”

During the CNN event, Harris said she would move to make federal gun regulators lower the boom, saying, “And, by the way, ATF – alcohol, tobacco and firearms – they’ve been doing a lot of the ‘A’ and the ‘T’ but not much of the ‘F.’ And we need to fix that.”

That assertion may be somewhat inaccurate. According to ATF’s own figures, well over 90 percent of the cases it investigated in 2017 involved guns. Specifically, some 35,302 gun crime cases were initiated versus just 91 for alcohol and tobacco cases.

Who is Kamala Harris?

Harris, 54, started off as the deputy district attorney in Alameda County in 1990 then progressed moved through the ranks of attorneys employed by San Francisco before winning election as that city’s district attorney in 2003. While there, she penned a brief to the U.S. Supreme Court against gun rights advocates in the landmark 2008 Heller case contending that the District of Columbia’s defacto gun ban did not violate the Second Amendment.

It was also under her two-term watch as San Francisco’s chief law enforcement officer that the city’s controversial gun lock and ammo ban law was implemented. That law was challenged in the courts by gun rights groups but eventually upheld by the U.S. 9th Circuit.

Picking up the Democratic nomination for California attorney general in 2010, she narrowly won that office with the endorsement of fellow party members U.S. Sen. Dianne Feinstein and House Speaker Nancy Pelosi. While there, she oversaw an expansion of a controversial program to seize firearms from prohibited gun owners, fought to keep the state’s 10-day waiting period for gun purchases, announced that California’s dormant Microstamping law is now in effect, and was a key figure in the Peruta v San Diego case which challenged the state’s may-issue policies for concealed carry handgun permits.

To be sure, Harris is one of nearly a score of Dems looking to plan a move to the White House in 2020, but she is not alone in waving gun control as a banner to set herself apart from the pack. Both South Bend, Indiana Mayor Pete Buttigieg and U.S. Rep. Eric Swalwell, D-Calf., have both come out swinging for the cheap seats on gun control issues, setting the stage for next year’s race just out of the gate.