The lever-action rifle has remained largely unchanged for decades. From an engineering perspective, some may say the design nears perfection. But spring 2019 will go down in history as the year cowboy action changed. Henry Repeating Arms has taken its nearly flawless design to complete lever-gun perfection. Feast your eyes on the Henry Side Gate Lever Action.

Adding a side loading gate – a popular feature on Winchester and Marlin lever-action rifles – marks a first for the Henry design. As Henry vice president Andy Wickstrom explained the decision was made in response to demand. “There has always been a customer segment that prefers a loading gate,” he said. “The new H024 Henry Side Gate features a loading gate as well as a removeable inner magazine tube. It is the best of both worlds.”

The H024 Henry Side Gate gives users the ability to load from both a side loading gate and a tube loading gate. More importantly, the feature puts Henry in the thick of competitive shooting. Heretofore, cowboy action shooters have been necessitated to opt for Winchesters, Marlins, or a variety of reproductions using the side gate for the ease of rapid fire reloads through the side gate.

The Model H024 Side-Gate Lever Action – while not a particularly sexy name – will turn heads in design, performance, and options.

The receiver is finished with hardened brass polished to the mirror shine that has given Golden Boy rifles their name. The 20-inch round barrel is button rifled, blued and topped with iron sights. In a nod toward functionality, the model includes sling swivel studs. Further, the centerfire in-hammer transfer bar makes for convenient and safe carry with the hammer down on a loaded chamber. 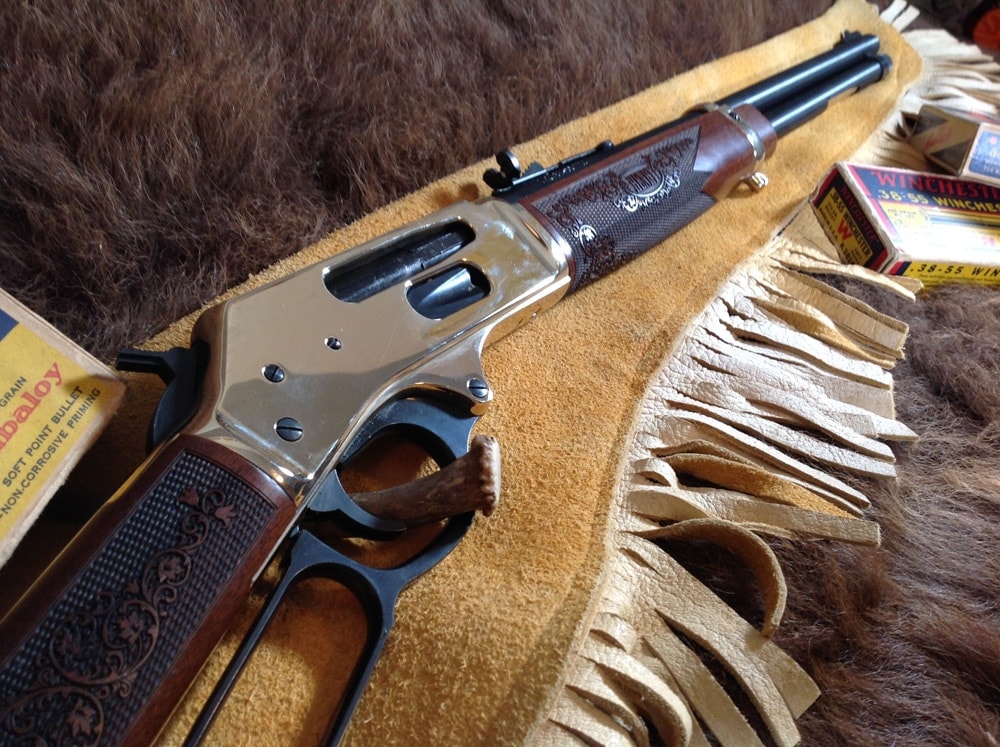 A Henry rifle has never looked like this! A side loading gate on a Henry? Take a good look. Life as we know it will never be the same. (Photo: Kristin Alberts/Guns.com)

With a buttplate and front barrel band and sling swivel also in high-polished brass, the H024 is a nicely balanced mix of shine and blue. Overall length is 38.5 inches with an empty weight of 7.5 pounds, making the rifle at once wieldy and controllable. No matter the chambering – .38-55, .30-30 Win. or .35 Rem. – the tubular magazine holds five rounds. 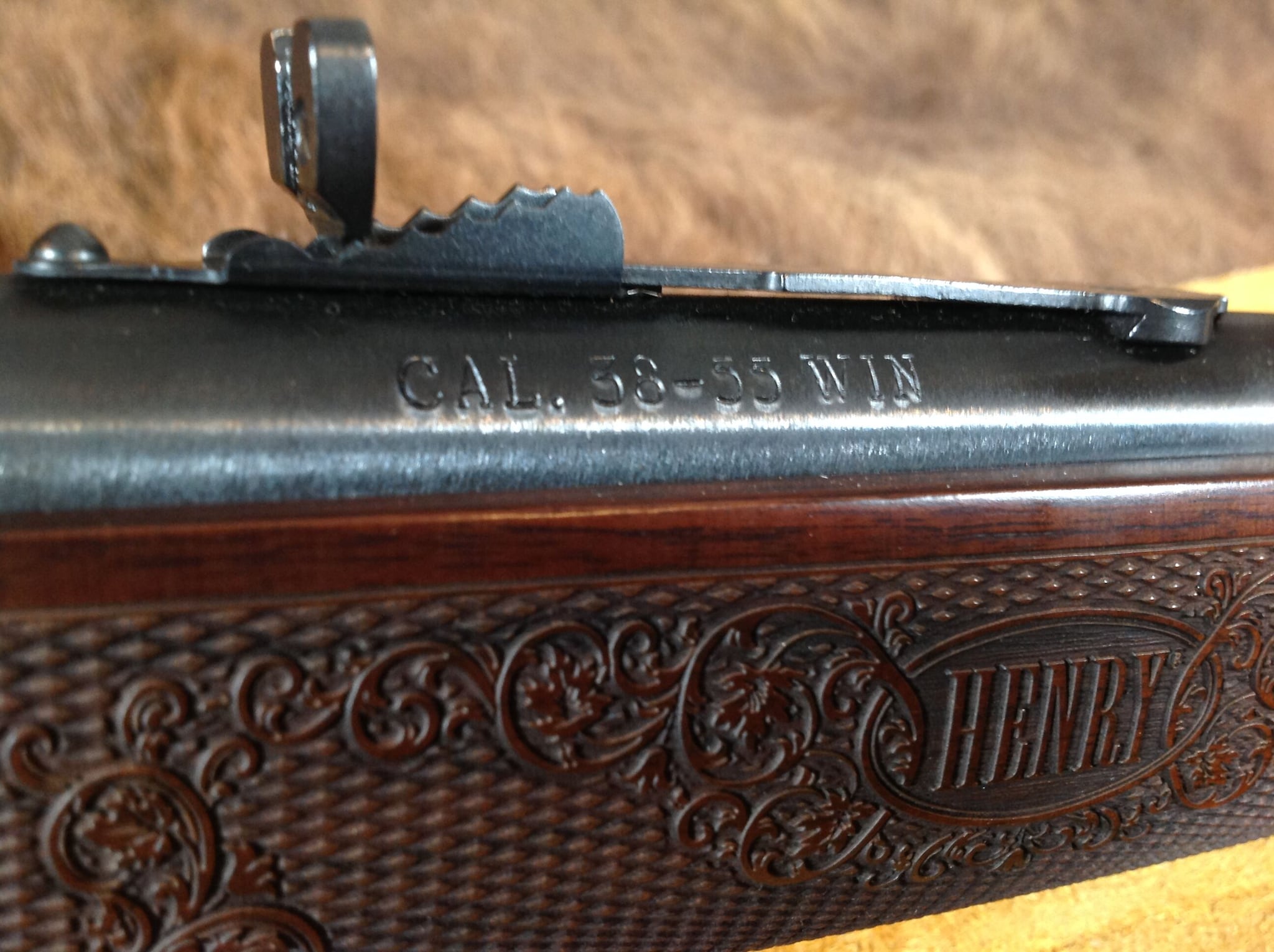 Detail on the fine wood engraving on the Henry Side Gate, which makes this one of the most ornately done pieces of Walnut on a Henry rifle. (Photo: Kristin Alberts/Guns.com)

Unlike the test gun, production models are advertised to ship with a large loop, which not only makes an aesthetic statement, but is much more practical for gloved shooting. MSRP on the rifles will be $925, and if you want one, best jump in the line now, because the want-lists will surely outpace even the quickest production, for a while at least.

This looker of a rifle comes drilled and tapped from the factory for a Weaver 63B scope base. Stocks are American Walnut of excellent quality, and in one of the classiest moves I’ve seen on a Henry long gun yet, the checkering and decorative branding on the wood is a sight to behold. It’s almost too lovely to fire. Almost.

Henry may be turning the heads of engineers with this new adaptive platform, but in its blood, the rifle shoots just as fine as any of its earlier siblings. I opted not to mount a scope to sully the good looks of the well-dressed model, but the .38-55 would fare very well with an optic in the hunting woods. I’ve had the great pleasure of taking an American bison with that caliber in an old rifle, so the round not only performs but holds a deep accounting of nostalgia as well.

I had a nice choice of factory ammo from Buffalo Bore, HSM, some handloads, and even fired off a few truly old rounds as well. If your intent is to hunt with the Henry – as suggested by the company’s new campaign – you’d be hard pressed to find better, harder-hitting ammunition than that from the passionate hunters at Buffalo Bore. Their Heavy .38-55 rounds are 255-grains and tolerances are hand-load quality with production availability. 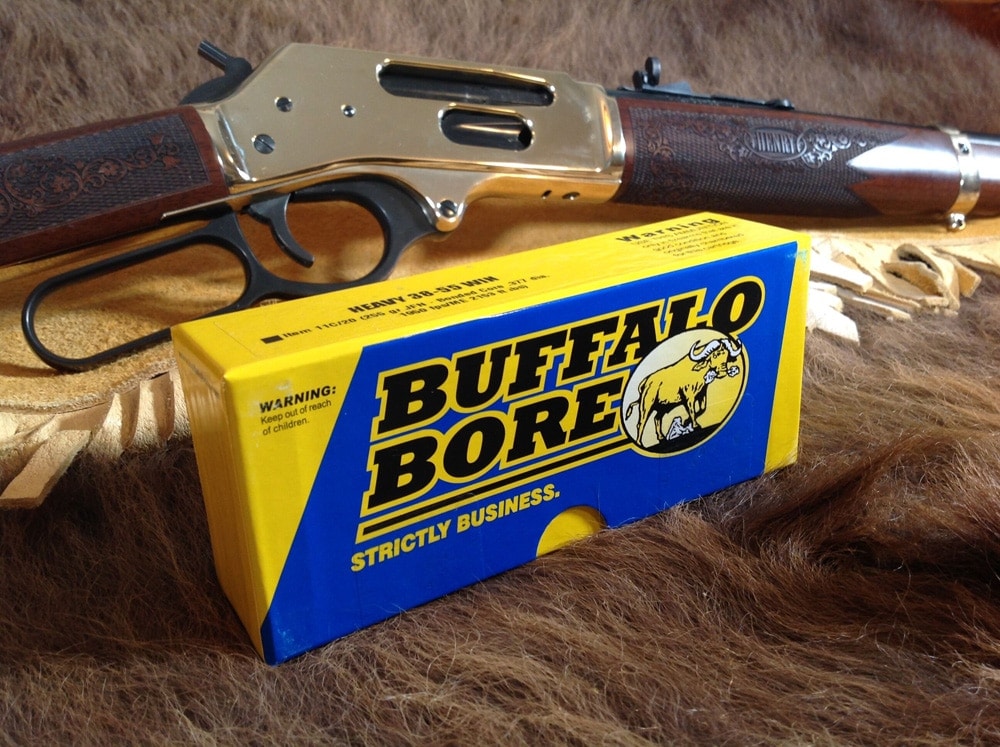 Though we fired several brands of .38-55 ammunition, Buffalo Bore is at the top of the market. Their 255-grain JFN, bonded core bullets shot tight groups even with our iron sight limitations. (Photo: Kristin Alberts/Guns.com)

Firing from a bench with iron sights, my best 50-yard group came in under .75 inches with Buffalo Bore. Stretching the limits of eyesight and iron-ability, 100-yard groups opened to an average of 1.45-inches, with the best group 1.15-inches. Certainly, more practiced iron sight shooters could best that. The 1-in-18-inch twist on the .38-55’s barrel had no problem stabilizing the short range of bullet weights we fired from 240 to 255 grain. Further, there did not seem to be any drop-off in accuracy even when firing “vintage” rounds.

Aside from being able to load the new model via the side-gate, nothing else changes in physical functionality of the firearm. The best way to unload your Henry rifle is still to clear the loaded round from the chamber, keeping an open action, and dump the rounds from the tube, though it is completely acceptable to manually eject the cartridges one at a time by cycling the action.

The action was silky smooth, feed-fire-eject ratio was 100 percent with all types of ammo, and accuracy was on point. Though lever action triggers have never been a thing to still the heart, trigger pull on our test gun measured at 4.25 pounds on a Lyman digital pull gauge. The thrill of pulling the trigger on a nostalgic round like the .38-55 stirs thoughts of the western cowboy culture, gunslinging days gone by, and fine folks who are not ready to allow those American traditions to fade into the sunset.

The company synonymous with the blue-collar American spirit, a customer-comes-first attitude, and patriotism deep in the bones has outdone themselves this time. Henry’s new model H024 with the side loading gate will no doubt change the way lever-action rifles are built and used.