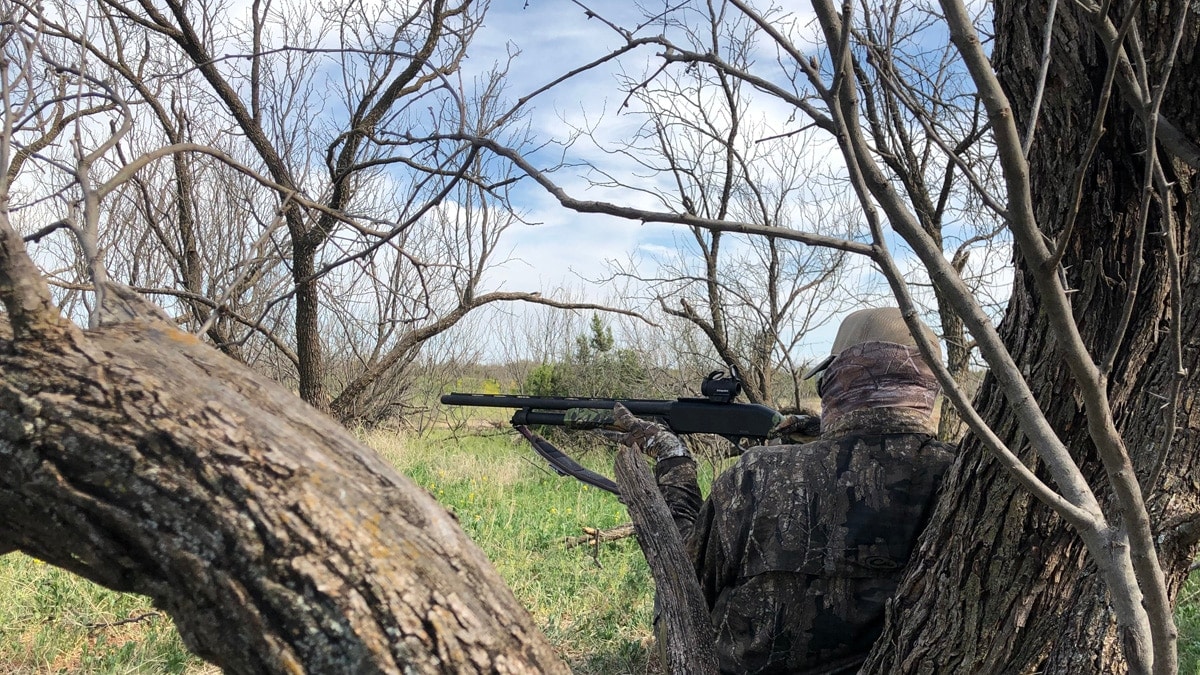 Hickoff, who favors run-and-gun style hunting over blinds and decoys, takes aim at a Rio Grande from his well-hidden location. (Photo: Kristin Alberts/Guns.com)

I recently shared a memorable spring Rio Grande turkey hunt in Texas with Steve Hickoff, one of the most well-known and respected turkey hunters of our generation. This is a man whose passion for the hunt is rivaled only by his dedication to conservation.

Hickoff was named the NWTF/Tom Kelly Communicator of the Year for 2019, a prestigious award that reflects success in the industry for his longtime work promoting hunting and conservation as a turkey hunting writer, editor, and book author.

Guns.com was lucky to spend some time with Hickoff following a successful hunt. Read on to learn what makes a live-and-breathe turkey-chaser tick, get his top tips for bagging gobblers, selecting a gun and ammo, and learn a bit about a top hunter who remains humble despite his lifetime of accomplishments.

GDC: Let’s start out by learning a little about your background. How did you get started in turkey hunting?

Hickoff: I was born and raised in north-central Pennsylvania, where the turkey hunting culture was and is alive and well.  I started turkey hunting with my father, and from there, I found myself captivated by the birds. Just everything about turkey hunting. I turkey hunted during my college years. I attended Lock Haven University of Pennsylvania (bachelor’s degree) and the University of New Hampshire (master’s degree), majoring in English and writing. My focus was three-fold: journalism, fiction and poetry. Of course, I was always driven by my love of the turkey hunt.  The marriage of both interests has allowed me to make a living at this. Writing. Editing. To reach my career goals, I wrote on everything for everybody, Fur-Fish-Game to Gray’s Sporting Journal, and eventually streamlined my focus to turkey hunting. In the end, this is exactly where I wanted to be.

GDC: In addition to the many articles you’ve written and the “Turkey Calls” column, you’re also the author of several books on turkey hunting. Tell us more about that.

Hickoff: I grew up an avid reader, and I still am, so it was really a natural progression that I wanted to be a writer and book author. I have many of the sporting classics on my bookshelf, a big turkey hunting book collection, and I re-read them frequently. I always want to have the mindset of that time period recorded in the old turkey hunting titles. I published two turkey hunting books with Stackpole, who’d also published some of my iconic turkey hunting heroes back in the day when I was young, namely Roger Latham and Dave Harbour. It’s not just hunting, but rather, a lifestyle.  I work now in digital media, which is great in so many ways, but I want to blend that with the written word, the books, the past, to stay faithful to the old ways. I still love publishing in the print magazines.

GDC: You have been writing the Turkey Calls column for quite some time now. Should we also assume you are a collector of turkey calls? Is there a certain turkey call that you’ll use before all others?

Hickoff: I wouldn’t necessarily say a collector, but it is fair to say I have a good number of calls.  I’m drawn to the call making history and call makers; many are friends.  Given the line of work, I’m always trying out new calls.  In the end, though, I just can’t keep them all, so when I guide new hunters, I like to give them a call to get them started.  There are some calls that I always save, that have a special place. For instance, the Primos Rare Breed Glass pot that we used on our Texas hunt, I’ve already written the date and location on that one, and it will be in my collection as a reminder of the great memories from our hunt.

GDC: So with all those calls, do you have a favorite?

Hickoff: A favorite call? That would be the old M.L. Lynch box call I inherited from my father.  Lynch drove from Alabama to Pennsylvania in the early 1950s (I wasn’t born yet), and Lynch was selling these calls out of the back of his vehicle.  My father bought one of those early calls. My dad also passed along a homemade slate with a corncob striker that he made.  It’s the sentimental history of the thing, but believe it or not, I took that slate call my dad made out a few years ago, and it still sounds great.

NWTF photo: Steve Hickoff, one of the most respected turkey hunters of our time shows, off his NWTF Communicator of the Year Award for 2019. (Photo: NWTF)

GDC: We just enjoyed watching you mentor a female hunter who had yet to harvest her first turkey, and you seemed to enjoy that process more than bagging your own bird.

Hickoff: One of the most rewarding things is mentoring new hunters. It is truly a privilege to be part of that. So many times, you look at pictures from a hunting camp and everybody is serious. Nobody is smiling. And then you go on a hunt like this one, with somebody who is so absolutely thrilled to be on the hunt, to get close to the birds, and everybody is smiling and enjoying the hunt, even when not everything goes right.  That’s what this is all about.

GDC: You have hunted turkeys all over the United States and Mexico. Do you have one special or preferred location?

Hickoff: You know, there’s really not a particular location. Every hunt is about the landscape, the place, the turkeys.  It’s being welcomed for a period of time to somebody else’s land, to their life.  I just love the people, the memories we make, the hunt itself.  Turkey hunting is such a rich and rewarding experience, and it’s about so much more than just taking a bird.

GDC: We know you’ve hunted with many different guns, but do you have a favorite setup?

Hickoff: I get to use all the latest industry guns, which is great, of course.  But for me, the ultimate turkey guns are my old Remington 870s (again, the memories). 870s are incredibly reliable and pattern so well.  No matter which gun you choose, though, the key is really making sure you have a good choke for the loads you’re using. You want that solid pattern on target so you’re confident on making a clean kill in the field. I know optics for turkeys are trending now, and I’ve used them plenty, but in the end, I’m an old-fashioned, bead-sight guy, or maybe with fiber-optic sights, though I’m impressed with the Aimpoint Micro H-2 Red Dot Sight we used on this Texas hunt.

GDC: Which gun would you recommend for new hunters?

Hickoff: That’s an easy one.  It’s not about a particular gun, nor does it have to be the latest and greatest to have a successful hunt. It’s all about the confidence level.  A hunter must be comfortable and confident in whatever gun they choose. No matter which gun that might be, practice enough that you’re completely confident in the gun, the load you’ll be using, the sighting system. When I’m working with a new hunter, I like to get that bird in to close range so they can appreciate the thrill of the hunt and deliver that knockout shot. I want them to get hooked on this sport we so love.

GDC: There are so many new premium turkey hunting loads on the market. What are your thoughts on those, and is there one you prefer?

Hickoff: There are some impressive innovations right now, especially from Federal Premium.  The new TSS loads are cutting edge, there’s no doubt about that.  With the new TSS shot technology, it’s amazing the performance of those rounds, and they can certainly extend the effective range.

The only downfall I find to these new loads that are touting the long-range kills, or whatever it might be, is that they’re taking away the focus from the best part of the hunt, which to me is calling and getting those birds in close.  The new rounds give hunters confidence, for sure, but there’s no replacement for practice, spending time at the patterning board, and honing hunting skills.  I don’t ever want to take the fair chase out of the hunt, the ethical shot, the thrill of getting a gobbler coming right to you.  If you’ve practiced and are confident in those longer shots, that’s fine, but I believe in respecting the birds and the resource and making clean, sure shots.

GDC: What is your preferred way to hunt turkeys?

Hickoff: So much is made today of the latest gadgets and gear, and there are some fantastic innovations, but I like to travel light and get up close and personal with the birds.  My favorite tactic is to initiate contact with the turkeys by calling.  I want the hunt to be a fair chase.  I rarely use blinds or even decoys, unless I’m on a hunt field-testing these options.  I just love calling. To have a conversation with those birds, to get yourself within such close range of a wild turkey.  I prefer an active versus passive approach.  You can learn so much as a hunter by getting up close, calling, interacting with these wild birds. I enjoy studying turkey behavior, and in the end, I believe that makes you a better hunter.

GDC: You’ve been affiliated with the National Wild Turkey Federation for a number of years now. What should hunters know about the NWTF?

Hickoff: As you know, I’ve been writing and editing with Realtree for 15 years, but it’s also an honor to work with the NWTF.  Over the years, I’ve seen such great improvements and I feel strongly about their mission.  For instance, when the NWTF was founded in 1973, there were roughly 1.3 million wild turkeys in North America. After decades of work, that number hit almost 7 million turkeys. Today, the NWTF is focused on the future of hunting and conservation, as it always has been.

In the end, the NWTF is really vital to turkey hunting.  They protect the heritage, the traditions.  They represent what we so love.  If you hunt turkeys, you should be a member, plain and simple.

GDC: You have accomplished so much in your career.  What’s left? Where do you see yourself in the future?

Hickoff: I was honored and humbled to win the 2019 Tom Kelly (NWTF Communicator of the Year) Award. That’s some great company.  My career goal has always been to reflect the NWTF’s steady restoration and conservation efforts on behalf of the wild turkey. As an avid turkey hunter and professional writer, I’ve always seen myself as the man in the middle — writing, editing, and publishing work to reflect our hunting heritage in both print and digital platforms.

Even after all these years, I still love this game. I’m still driven. I still get just as excited about every hunt, the people and the places.  Honestly, I just want to keep doing it!