Given innovations in ammo, baby bore shotguns once relegated to small game have now become a viable turkey hunting option. The trend of getting after turkeys with the once underwhelming .410 is on a meteoric upswing. Hunters used to assume it took a 12-gauge—or bigger—to clean harvest turkeys. The times they are a-changin’. Companies like Federal Premium, Mossberg and Savage Arms just put the gobblers on notice with modern innovations. Naysayers will always claim .410 “too small” to humanely kill tough, trophy sized toms, but in this case, the proof can be found both on the patterning board and in the field.

The major limiting factor for the .410 shotgun has been its slimline, small-capacity hull and the subsequent inability to pack large amounts of lead shot. With tungsten variants all the rage, it turns out less really is more.

Federal Premium has been leading the charge on the .410 turkey market. The name of the game here is small pellets with big performance. Heavyweight Tungsten Super Shot, or TSS, is a tungsten alloy superior in both density and performance to standard tungsten.

For comparison, even regular tungsten is far better than lead. TSS is a 3-inch .410 load with a 13/16 ounce of No. 9 shot that uses a specialized, full-length wad designed to prevent direct contact of the super-hard TSS with the barrel. TSS puts almost unbelievable patterns on target with that No. 9 shot, extending both the range and lethality of the baby bore.

Then, hot on the heels of the game-changing Heavyweight TSS comes the Hevi-X Strut from Hevi-Shot. Although I have yet to pull the trigger on these loads, they are an interesting addition to the market. The 3-inch shells are packed with a 9/16 charge of No. 6 tungsten shot. The No. 6 shot size means considerably fewer pellets downrange than the No. 9 TSS, but the tradeoff means larger shot moving at slightly greater speed.

While most any .410 shotgun will do, to get the most of modern ammunition, a 3-inch chamber and full choke are important considerations, and an extra full choke is better still. If you have a nostalgic old standby baby gauge that patterns well, there’s no reason not to use it. If not, however, there are multiple options on the market that will get the job done, including a pair of new-for-2019 turkey specific .410s from Mossberg and Stevens/Savage. 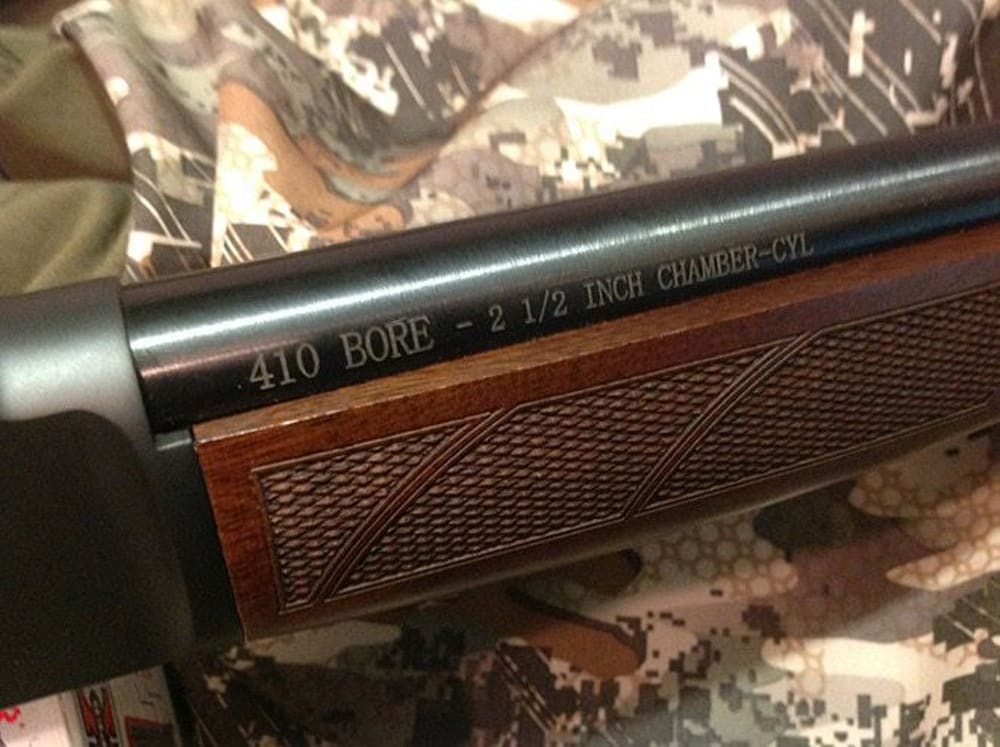 Note the smaller chamber size on the Henry .410 lever action, which sadly does not allow use of the potent 3” TSS specialty turkey rounds. Though the barrel is marked for a fixed cylinder choke, this was an early test gun using a full choke. (Photo: Kristin Alberts/Guns.com)

While bare beads work just fine with practice, new shotguns with their provisions for optics mounting and fiber optics make it even easier to find success with smaller gauges for new and experienced hunters alike. In the end, though, there is no—I repeat, no—replacement for practice and time at the patterning board. Here are three baby-frame shotguns with which I’ve harvested turkeys.

Mossberg 500 Turkey: The ultra-reliable Model 500 pump action platform gets micro sized to .410 specifically for turkey hunters. Along with the 3-inch chambering, there’s full Mossy Oak Bottomland camo coverage and a fixed full choke in the 26-inch vent rib barrel. Holding five rounds in the tube plus one in the chamber, the Mossberg brings serious firepower to the turkey woods, should a follow up shot be needed, or better yet, opportunity for a double.  Check out our full review on for more details.

Stevens Savage 301: The new-for-2019 Stevens-by-Savage single shot, break action .410 was purpose built to bring affordability to the .410 turkey market. Best of all, the gun with the $199 MSRP is optimized specifically for the Federal Premium TSS loads with a 26-inch barrel and extended extra full turkey choke. This 5-pound scattergun puts more pellets in the turkey head/neck at 35 yards than some of the bigger-bores using lead, and does so with much less recoil while not sacrificing terminal performance. Check out our full review on for more details.

Henry Lever .410: Though the Henry lever action .410 is not brand new, it is a capable and interesting platform for non-conventional turkey hunters. The 24-inch barreled model is the optimal choice, which ships with a full choke. Though we have harvested several turkeys with the Henry, the major downfall is the 2.5-inch chamber which does not allow use of the 3-inch specialty loads, making the maximum effective range of the Henry—and any other guns that cannot chamber TSS—significantly less. In this case, we have limited our shots to inside of 20 yards.  See our video of a turkey hunt with the Henry.

Innovations make.410 shot shells more potent and lethal, thus more suitable for turkey hunting than ever before. However, law has not entirely kept up with the technological developments.

Federal Premium’s director of conservation, Ryan Bronson, explained there are still more than a dozen states that prohibit the use of .410 and 28 gauge for turkey hunting. The reasoning, though, is based on shot size rather than lethality or bore size. 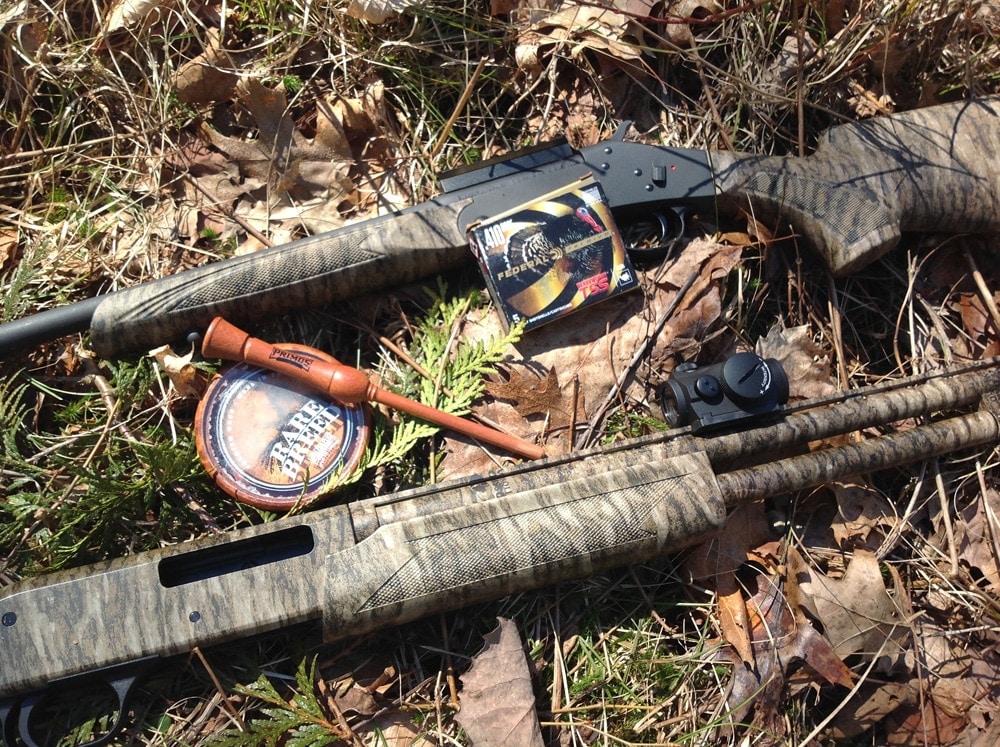 This pair of new-for-2019 turkey-specific .410 bore shotguns make the gauge more accessible for hunters than ever. The Stevens-by-Savage 301 single shot and Mossberg 500 Turkey use an extra full and full choke, respectively. (Photo: Kristin Alberts/Guns.com)

“Most of these turkey ammunition restrictions were put into place when lead was the only shot material available,” Bronson said and added that there are a number of states on the verge of updating their laws. “We’re pleased to see this movement gaining traction. It’s an important first step in making hunting more accessible for more people,” he said.

Modern tungsten-based ammo and tightly-constricted chokes help the .410 reach out farther and with more knockdown power than ever before. Using Heavyweight TSS, patterns held out to an impressive and confidence-building 40 yards. Compared to .410 shot shells of years ago, range for No. 4 or No. 6 game loads was limited to not more than 15 yards just to make a clean kill.

While innovations in ammunition are driving the .410 hype-train, firearms manufacturers following suit with guns dressed for success also help put more deadly patterns down range. For instance, guns like the Stevens/Savage Model 301 with its extra full turkey choke keep that shot string together tighter and longer, thus extending effective range and wallop. 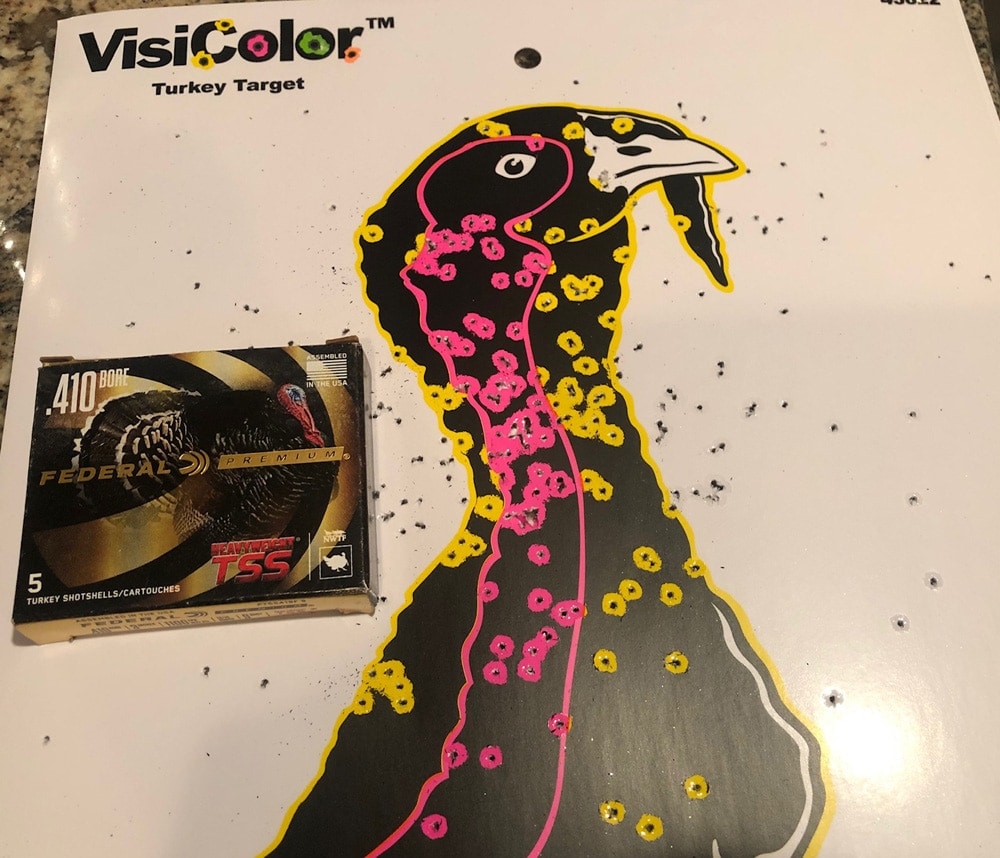 A 25-yard target shot with Federal Premium TSS through the Stevens Model 310 with its Extra Full turkey choke. Incredibly lethal and downright incredible from a .410. (Photo: Kristin Alberts/Guns.com)

Just because we “can” reach out previously-unforeseen distances in excess of 40 yards with a .410 turkey gun does not mean that we necessarily “should.” Though these guns with tight chokes and tungsten-based shots have both the pattern and knockdown power, it will always be a necessity to remain mindful of the limitations of the gauge. While TSS puts out lots of pellets, a tightly choked .410 also puts a pretty long and narrow shot string down range. The importance of being right on target, with lesser room for aiming error, is sure.

While many modern hunters seem bent on wanting to see at how great a distance they can kill a turkey, I will always maintain that the greatest joy of the hunt is getting birds in close. Calling them, hearing that thundering gobble in your wheelhouse, and adrenaline rush of close encounters with wild turkeys sets hunters up for great success with not only the .410, but any bore.

the Case for .410 Turkey Loads

I initially opted to turkey hunt with my old single-shot .410 because it was the first gun I ever owned. No doubt, many other hunters have related sentimental feelings for the baby bore. It is an accessible and light recoiling youth gauge, and a light weight long gun makes for an easier day in the field.