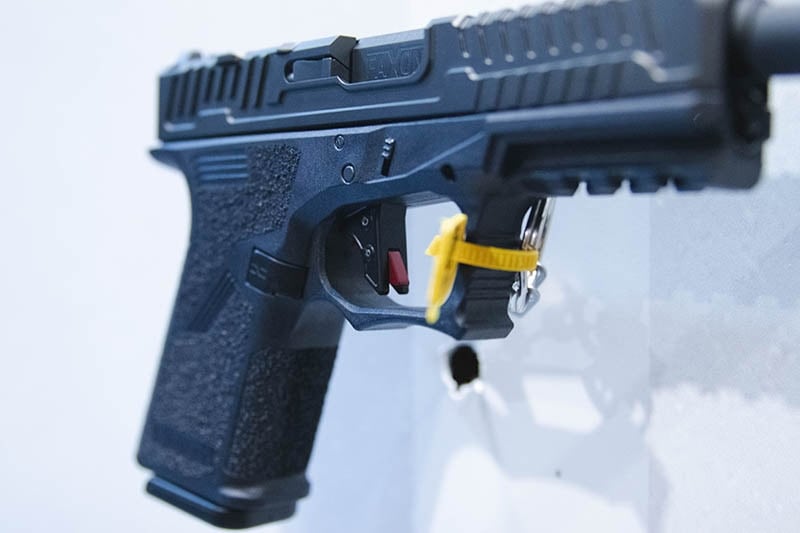 The FX-19 on display at SHOT Show, days after its debut. (Photo: Jacki Billings)

Starting from the ground up serving parts and accessories to consumers, Faxon jumped into the pistol arena in January 2019 with the launch of its first, complete handgun — the FX-19. Available in two models, Patriot and Hellfire, the FX-19 series comes stacked with Faxon parts offering a custom look right out of its hard-sided box.

Both pistols bring a Faxon PF490C frame with 1911 style grip angle, extended mag release and custom polished slide and rails. The slides themselves are machined in house at Faxon and bring an optic cut for Trijicon RMR or Holosun SO7C optics. The Patriot sports a Faxon Match Series G19 barrel while its counterpart the Hellfire comes with a threaded Faxon Match Series G19 barrel. Additionally, the Hellfire offers suppressor-height night sights and an enhanced low-profile magwell.

Curt Staubach, Director of Marketing for Faxon Firearms, told Guns.com in an interview that each little feature integrated into the pistols’ design brings a whole new aesthetic to the platform. 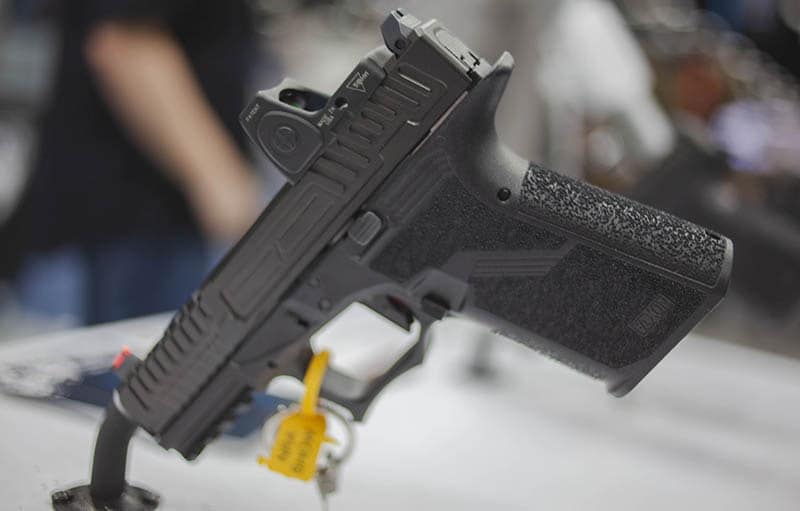 The FX-19 may look Glockish but it comes with parts machined in house at Faxon Firearms. (Photo: Jacki Billings)

“The FX-19 Patriot and Hellfire pistols are the culmination of a true team effort by a lot of folks at Faxon who simply made the pistols they’ve always wanted. For us, it’s a lot of small improvements that add up to greater whole,” Staubach said. “From the more aggressive texturing on the top of the frame to get a better grip with your off-hand, to the subtle stepped front serrations on the Hellfire slide that catch your thumb and index finger on press checks, we sweated the small things to put together a solid and reliable package that just works and feels good.”

The road to the FX-19 has been a long one. Faxon, best known to rifle and pistol builders for its aftermarket parts, moved into the realm of complete pistols after realizing a bigger market was available. This market catered to consumers who want a unique look and custom feel without having to toil away in a garage to build it themselves. There lies the success of the FX-19, Staubach said.

“For those that want to go out and build their own pistol, by all means, go for it! If you’d like to include a Patriot or Hellfire slide, pistol barrel, or other Faxon accessory for your build, we’d be honored if you considered us. But for those that don’t have the time, technical ability, or desire to do all that, we’re offering a solution that’s ready to go,” he explained. “It’s peace of mind, knowing it’s designed, manufactured, and tested from the ground up as a complete and reliable package.” 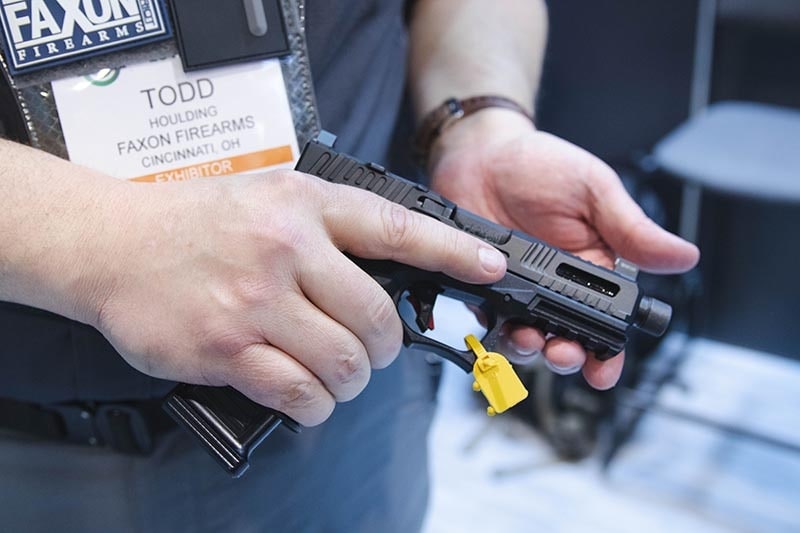 The company made small tweaks to the design that culminate into a pistol that feels good and shoots well. (Photo: Jacki Billings)

Though the idea of a Gucci gun out of the box is picking up steam, with companies like Zev and Shadow Systems also offering complete pistol builds catering to this custom market, Faxon says in house engineering and machining capabilities place them above the rest. With the means to machine slides and barrels from bar stock, Staubach says the company isn’t limited to using existing slide profiles or barrel blanks. Instead, the FX-19 is truly unique to Faxon. Additionally, Staubach says the company has worked to provide guns that already fit into existing holster molds, with no special tooling needed to accommodate carry.

“We made a conscious choice to make our first foray into the pistol market with a line that is innovative, but still works with existing holster molds and frame footprints,” Staubach said. “It’s an exciting time to be in the firearms industry and the pistol market is on the cusp of some amazing innovation. We’re just getting started.”