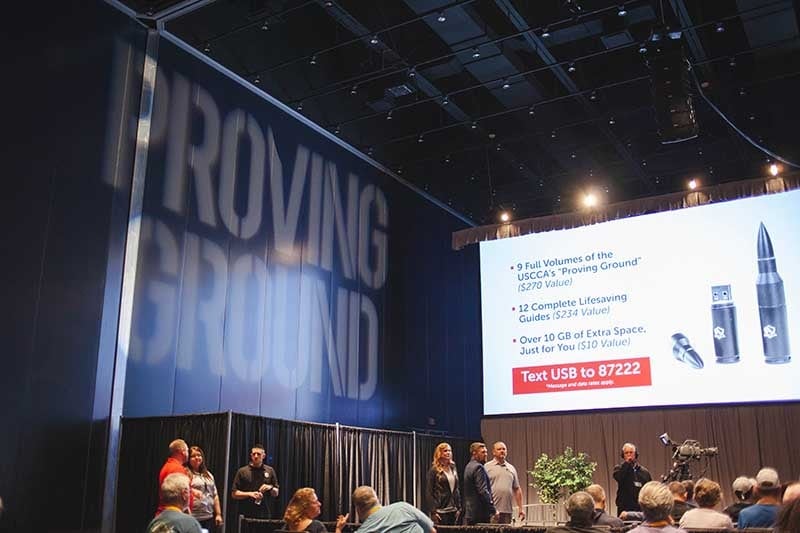 The Proving Ground Live event kicked off May 17 to a packed crowd. (Photo: Jacki Billings/Guns.com)

The Concealed Carry Expo was a flex of concealed carry muscles, lined with vendors, attendees and seminars are centered on personal defense, but nothing proved as powerful as the Proving Ground Live.

Proving Ground Live builds on the U.S. Concealed Carry Association’s Proving Ground concept — a series of training DVDs that showcases scenarios and then analyzes the events so concealed carriers can grasp a better understanding of personal defense situations.

The Proving Ground Live kicked the concept up a notch by introducing a true-to-life situation played out live in front of USCCA members. The event kicked off with an introduction by USCCA CEO and founder Tim Schmidt. Elaborating on the Proving Ground idea, Schmidt detailed how the training is relevant to the concealed carry community.

“We’ve been doing the Proving Grounds for about two years and the scenarios are getting better,” Schmidt told the crowd. “ I think tonight is going to be a great show that will pave the way for even more cool shows in the future.” 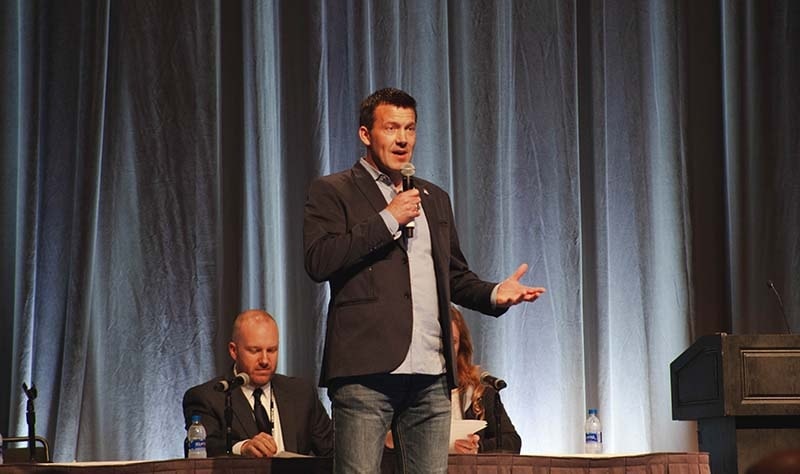 USCCA Founder and CEO Tim Schmidt addresses the crowd at the start of the event. (Photo: Jacki Billings/Guns.com)

Handing the program off to Kevin Michalowski, Executive Editor of Concealed Carry Magazine, the audience witnessed two pre-recorded Proving Ground altercations to give them an idea of what to expect. Each scenario was followed by a discussion with Michalowski, the participant in the scenario, attorney Tom Grieve and Associated Editor of Concealed Carry Magazine Beth Alcazar. After watching two different situations unfold and the reaction of USCCA employees on the screen, the event moved into the live version. Cordoning off the area and preventing guests from standing or moving around during the event, Michalowski explained the chain of events.

Jessica, a recent USCCA employee with only 12 weeks of concealed carrying to her name, was the star of the show. Equipped with a stress vest — which would track any hits on her and also alert her with a small electric zap — Jessica was told that she would be meeting her friend Kris for a chat on a park bench. What Jessica didn’t know was a deranged man claiming to love Kris would present a gun. First, in an apparent suicide, then turning the gun on Jessica and Kris. Jessica reacted, firing off one round in under 0.6 seconds. The bad guy was down. 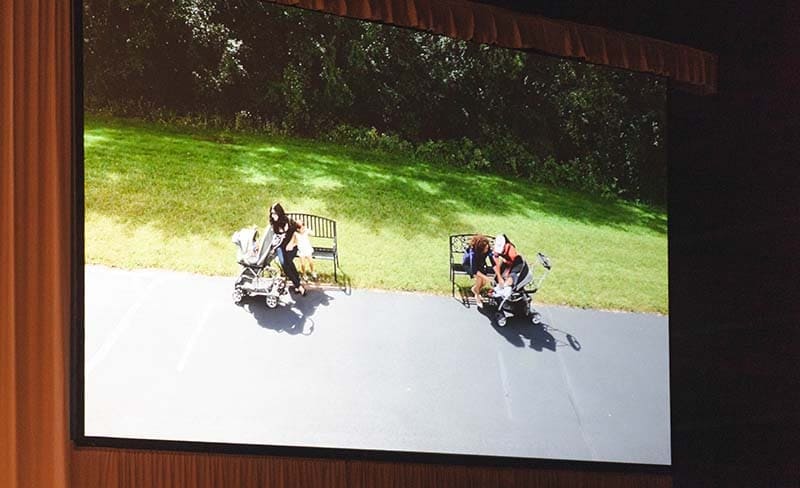 A pre-recorded video from the Proving Ground videos plays ahead of the event. (Photo: Jacki Billings/Guns.com)

Immediately after, a shaky Jessica was brought to the stage to relive her experience, hear expert opinions on her reaction and take audience questions. “I like to say that when somebody pulls out a gun, something bad’s going to happen,” Michalowski said as the panel began picking apart Jessica’s actions. “You shot him one time and I asked you about that on the way up (to the panel stage.) We don’t always get that immediate reaction. We want you to continue shooting until the threat stops.” 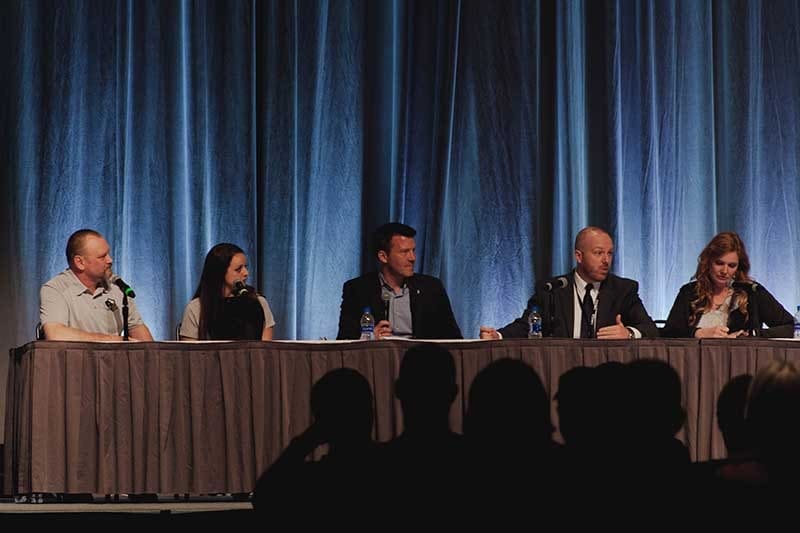 The event served as another learning opportunity for Concealed Carry Expo members. The panel tackled questions about how to deal with a suicidal individual, how to interact with 911 operators and police in addition to what happens following the legal use of deadly force.

All in all, USCCA members walked away with an understanding of the responsibilities of armed citizens and the scenarios they should be mentally playing out in preparation. 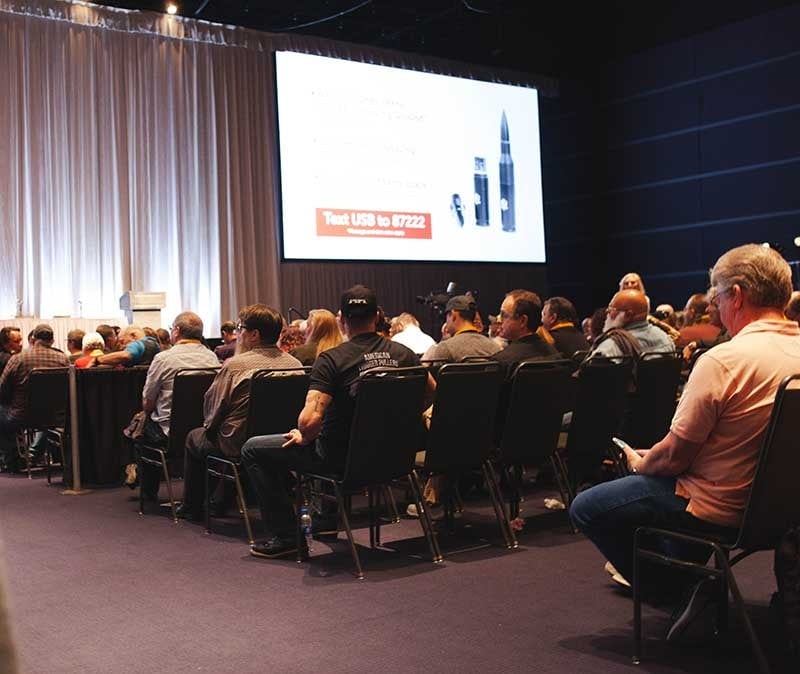