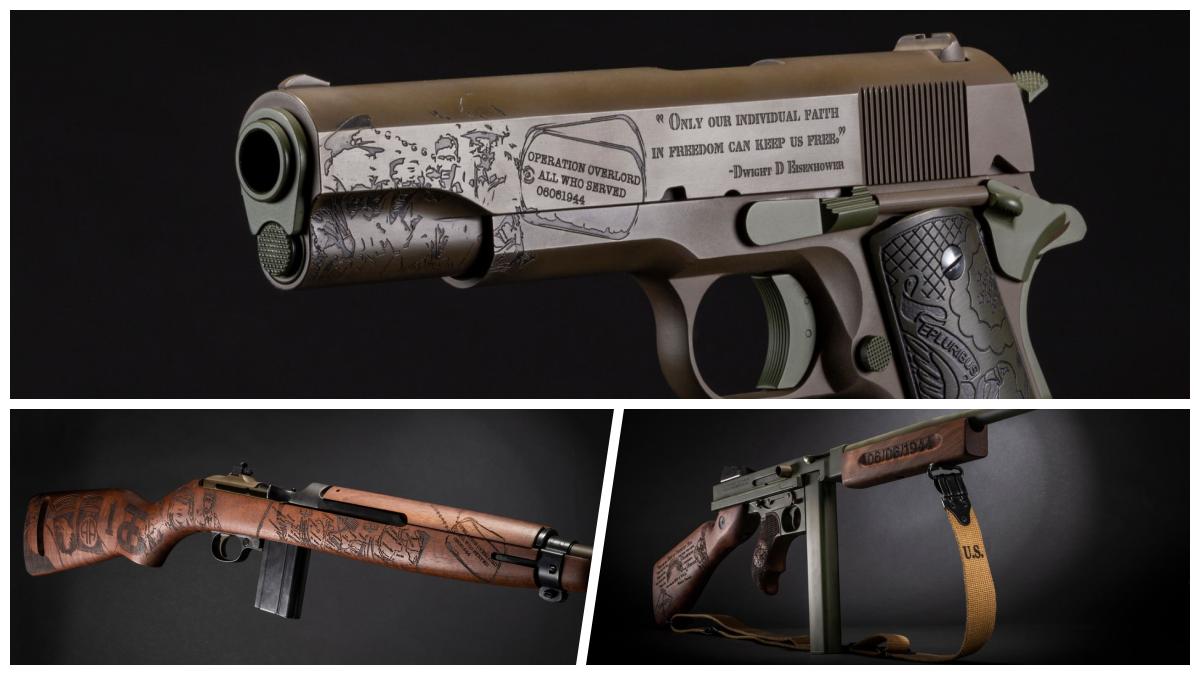 Auto-Ordnance has a trio of commemorative firearms paying homage to the men, units, and feats of courage related to D-Day. (Photos: Auto-Ord)

Thompson Auto-Ordnance has landed a series of GI-style guns in a salute to the upcoming anniversary of the D-Day invasion of Normandy in World War II.

In remembrance of Operation Overlord, which saw more than 160,000 Allied troops descend on the coast of France on June 6, 1944, Auto-Ord has unveiled limited edition, commemorative models of their Thompson .45 ACP semi-auto rifle, 1911A1 .45ACP pistol, and M1 .30-caliber Carbine. Each carries custom engravings by Outlaw Ordnance of West Monroe, Louisiana.

“America’s brave warriors were called to do the impossible, beginning the struggle to wrest Europe from the hands of Nazi tyranny,” says the Pennsylvania-based company of the D-Day invasion. “Auto-Ordnance offers this series to honor the many American soldiers who fought so others could be free again.”

The commemorative “Ranger Thompson” is dedicated to the memory of the elite U.S. Army Rangers who scaled the cliffs at Pointe du Hoc to attack a key German position on the morning of the invasion. 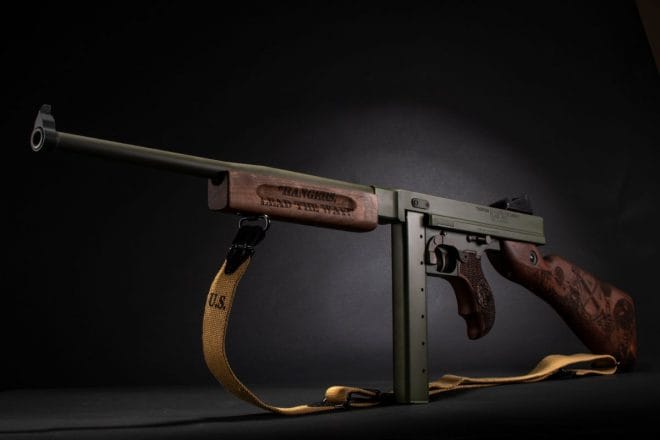 Cerakoted in Army O.D. Green, each has a series of engravings including the image of an Army Ranger, the Ranger patch, and a grappling hook used to scale the cliffs. At the time of the D-Day landings, the M1928/M1 “Tommy Guns” was the most prolific submachine gun in U.S. service. Auto-Ord’s semi-auto version sports a 16.5-inch barrel. 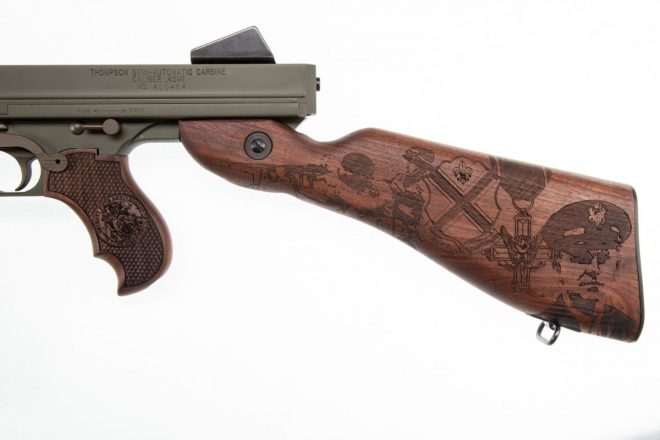 One 30-round and one 20-round magazine, a Kerr sling, and a WWII 3-cell mag pouch are included.

The special edition “Soldier M1 Carbine,” pays respect to the “war baby” .30-caliber weapon carried by thousands of GIs at Normandy– which included many paratroopers of the 82nd and 101st Airborne Divisions. 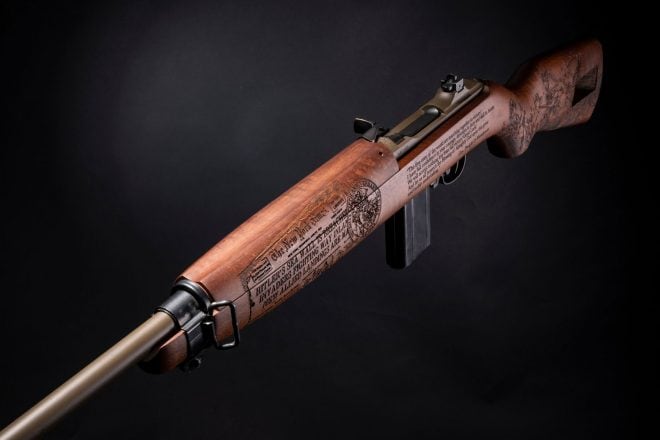 Engraved on the left side of the rifle’s walnut furniture are newspaper headlines from the invasion as well as part of Gen. Dwight D. Eisenhower’s address to the troops prior to the invasion. 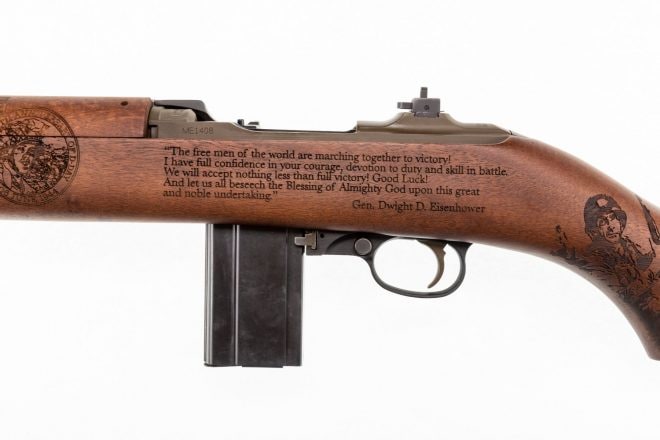 The buttstock has images depicting the beach landings while patches of the various Army divisions involved in Overlord are on the right-hand side of the stock. 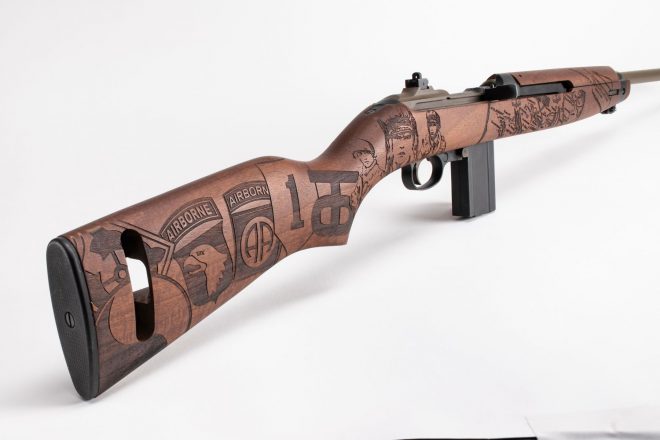 Speaking of Eisenhower, “The General 1911” has engravings of the Texas-born Allied supreme commander and later President as well as his words, “Only our individual faith in freedom can keep us free.” 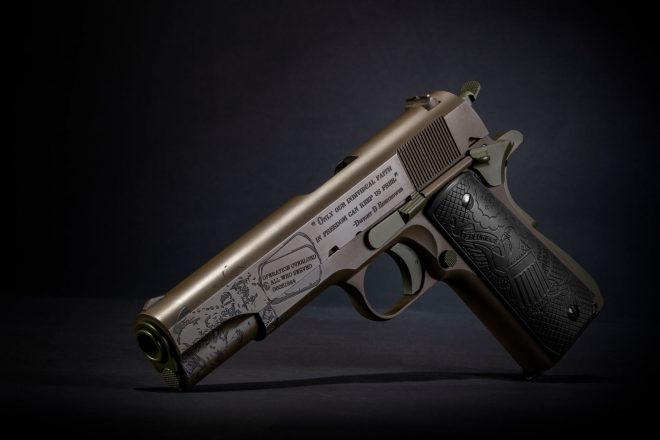 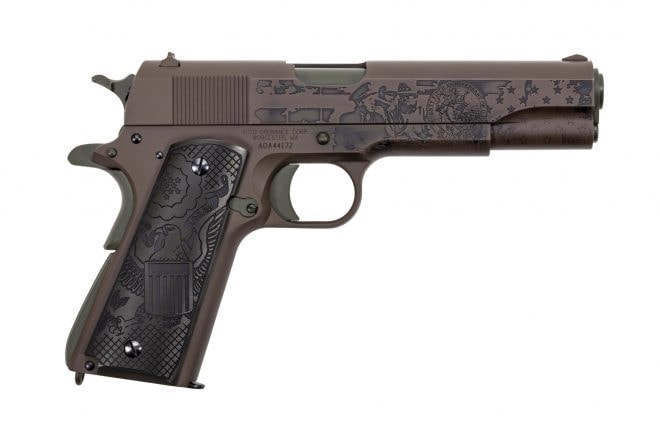