Whenever I’m in the market for a new gun, a pawn shop is probably the last place I would think of looking, that is until I met Freddy Garza. Garza is the owner of a family business called Freddy’s Pawn Shop in New Braunfels, Texas.

I met Garza at his shop to get an EDC story from him. That’s when I discovered that Freddy’s is not your typical pawn shop — scattered with dirty power tools and old bikes. His showroom is well organized and spotless. Garza has a huge selection of new and used guns. He’s an official Glock dealer and is also licensed to sell Class III weapons.

So what does a guy this well organized and knowledgeable like to carry? Agility and accuracy are high on Garza’s list of important handgun requirements and his weapon of choice is the Colt Defender Lightweight 45. The decision to carry this particular firearm was a hard one for Garza.

“The multiple guns I had to go through before ultimately settling on this Colt made my final decision a little tough,” he said. He carried a number of guns from Glocks to Sigs but this gun ended up being his favorite of them all. 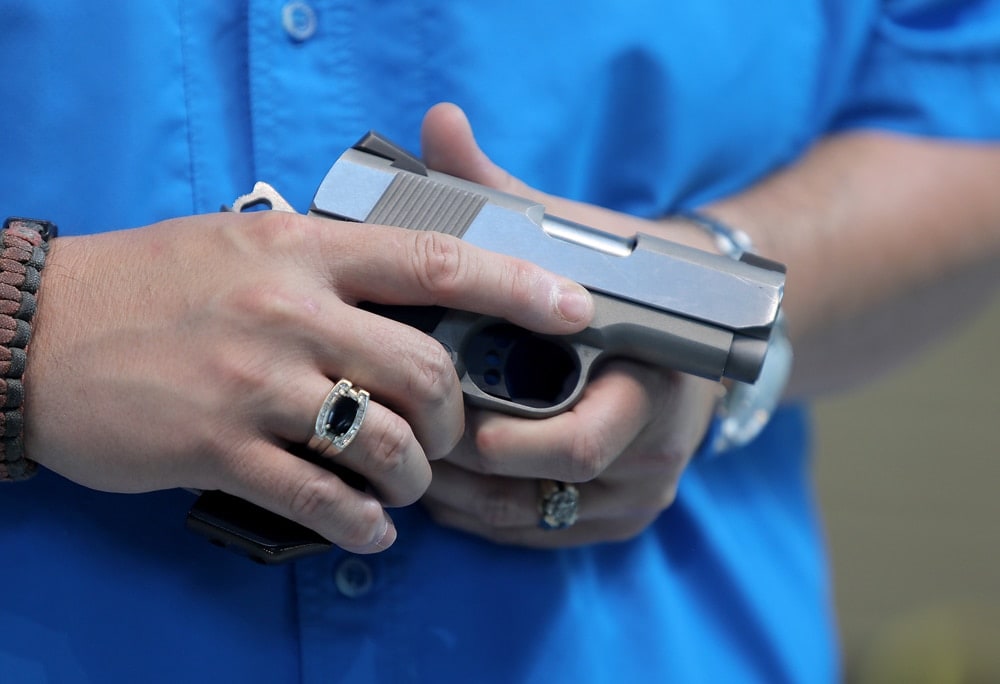 Agility and accuracy are high on Garza’s list of important handgun requirements and his weapon of choice is the Colt Defender Lightweight 45. (Photo: Don Summers/Guns.com)

Garza carries cocked and locked, so he really appreciates the safety features. “It has a double safety,” he said. “Your hand has to be fully depressed on the rear of the grip in addition to the safety on the side.” He points out the finger grooves on the gun’s hand grip that helps keep your fingers and hand in place for solid control. He also likes the slim lines and 7+1 capacity.

The holster of choice for this gun dealer is a Kydex leather mix, double loop that rests inside the waistband. “One of the reasons I like this holster is that it keeps my weapon tucked and out of my way,” Garza said. “It’s tight to my body and nice and easy to unholster my gun when I need it.”

Garza is very happy with his lightweight and agile Colt 45. “Every time I’ve gone to the range, this the most accurate weapon that I’ve ever fired at seven to 15 yards,” he said.

Want your own Colt Defender to carry every day? You can buy one from Guns.com right here.