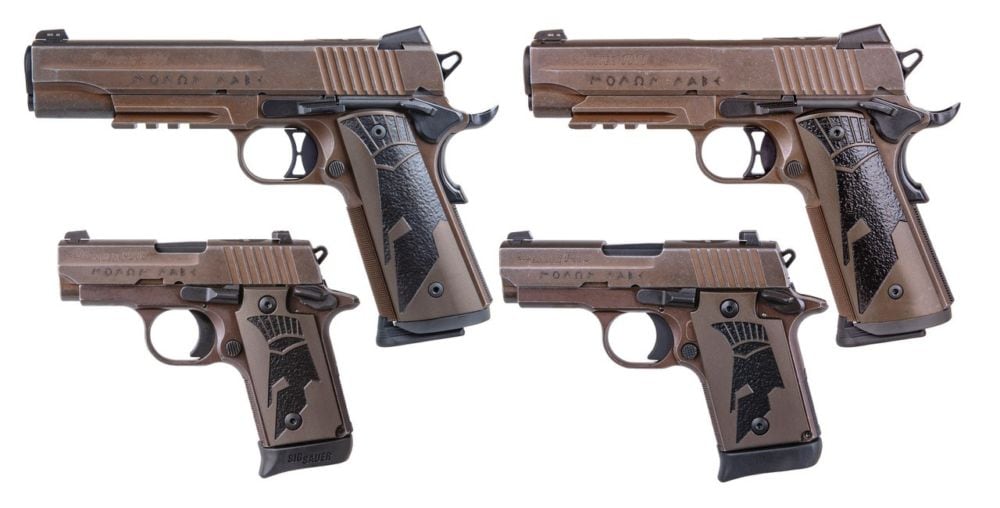 The four models– a 1911 Full-Size and 1911 Carry, along with corresponding P238 and P938 guns– are all hammer-fired, single-action-only, all-metal pistols. Each has been given what Sig describes as a distressed coyote finish and engraved aluminum grips featuring a Spartan helmet. The same branding is included on the slide along with the Greek phrase “ΜΟΛΩΝ ΛΑΒΕ” (Molon Labe), which roughly transliterates to “Come and Take It.”

The .45ACP-caliber 1911 Full-Size and Carry rail guns ship with two 8-round magazines and include a skeletonized hammer and trigger and black surface controls. The Full-Size uses a GI-length 5-inch barrel while the Carry model runs a shorter 4.2-inch barrel.

MSRP information is not currently available.

The P238 and P938 Spartan II Micro-Compact Pistols are now shipping! The new Spartan pistols have been completely redesigned with a distressed coyote finish. The slide is engraved with the historic Spartan phrase "MOLON LABE" ("Come and take them"). Custom grips are inlaid with the Spartan helmet to provide a bold statement finish. #SIG #NeverSettle #P238 #P938 #SpartanII