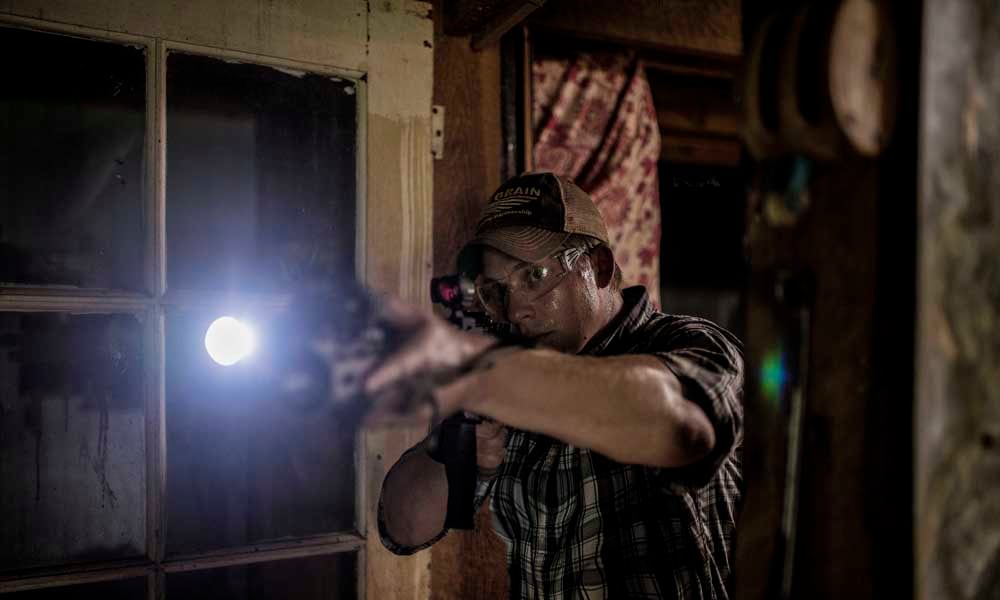 Whether a shotgun or a different gun for home defense, this beginners guide should help you understand the differences. (Photo: Chase Welch/Guns.com)

Home defense is the literal act of defending your home against a threat. When we say “home,” we mean the physical property and the people and possessions inside it. What threatens a home could be a lot of different things: burglars, rapists, jackboots, wolves, bears — whatever you may encounter. The ideal home defense gun can address them all but primarily the threat most likely to occur.

The best gun for home defense is one that, when handled safely and competently, provides peace-of-mind. It doesn’t matter if it’s a handgun, shotgun or rifle but there are certain qualities that benefit a home defense gun more than others. This article will detail what to look for in a home defense gun and we’ll use brands and specific models to illustrate examples. 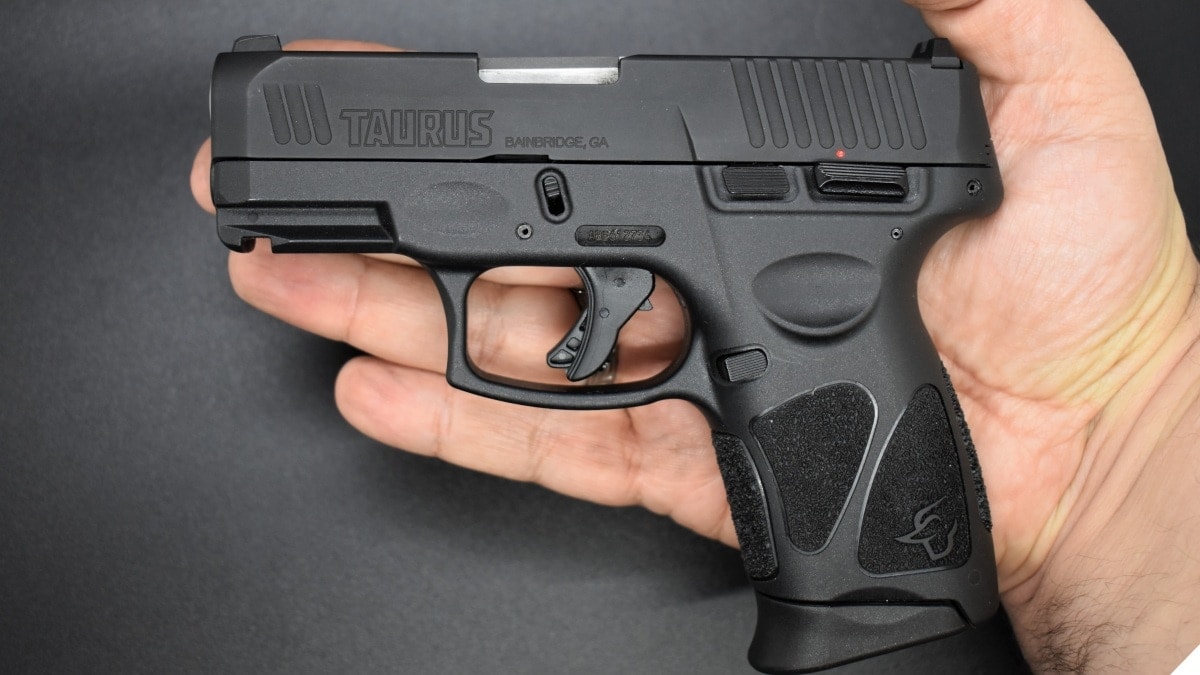 The Taurus G3c is a great and affordable handgun which could be used for home defense. (Photo: Chris Eger/Guns.com)

Handguns are by far the most popular choice for a home defense gun because they’re the most plausible choice. Given their size and range, most handguns are intended to engage targets at short distances. They’re also highly maneuverable in enclosed spaces like inside a hallway or turning through doorways.

While the implied argument here is “smaller is better,” let’s nip that in the bud right now. Smaller is more comfortable for concealed carry, but the answer for concealed carry isn’t always the same for home defense. If you’re comfortable handling a hand cannon like a Smith & Wesson Model 500 or Dirty Harry’s .44 Magnum, so be it. Let that be your home defense gun. This is America. 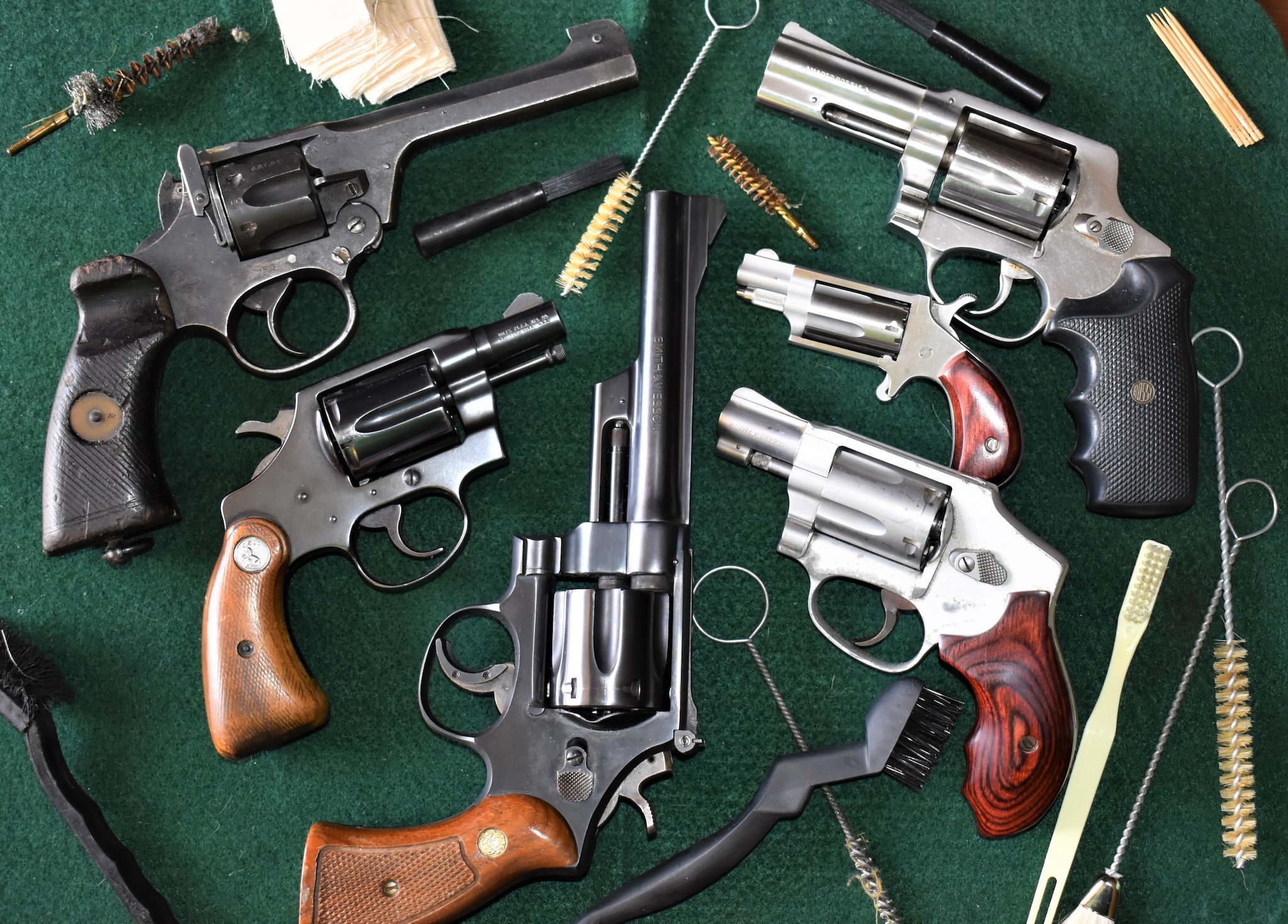 Revolvers have always been a staple of home defense. (Photo: Chris Eger/Guns.com)

But a more practical solution is to consider what’s carried by those who put themselves in harm’s way every day as they patrol our streets. In the last century, law enforcement officers carried full-size .38-caliber revolvers with double- and single-action triggers.

For the time, the limited capacity and cartridge was proven reliable for the threats at hand, ie criminals with comparable weapons. Under the same conditions — which will likely be the case for a mugging or burglary today — the design is still effective. Many people trust revolvers because of their reliability: the cylinder will rotate with every pull of the trigger — never a failure to feed. Hey, if it ain’t broke, don’t fix it. 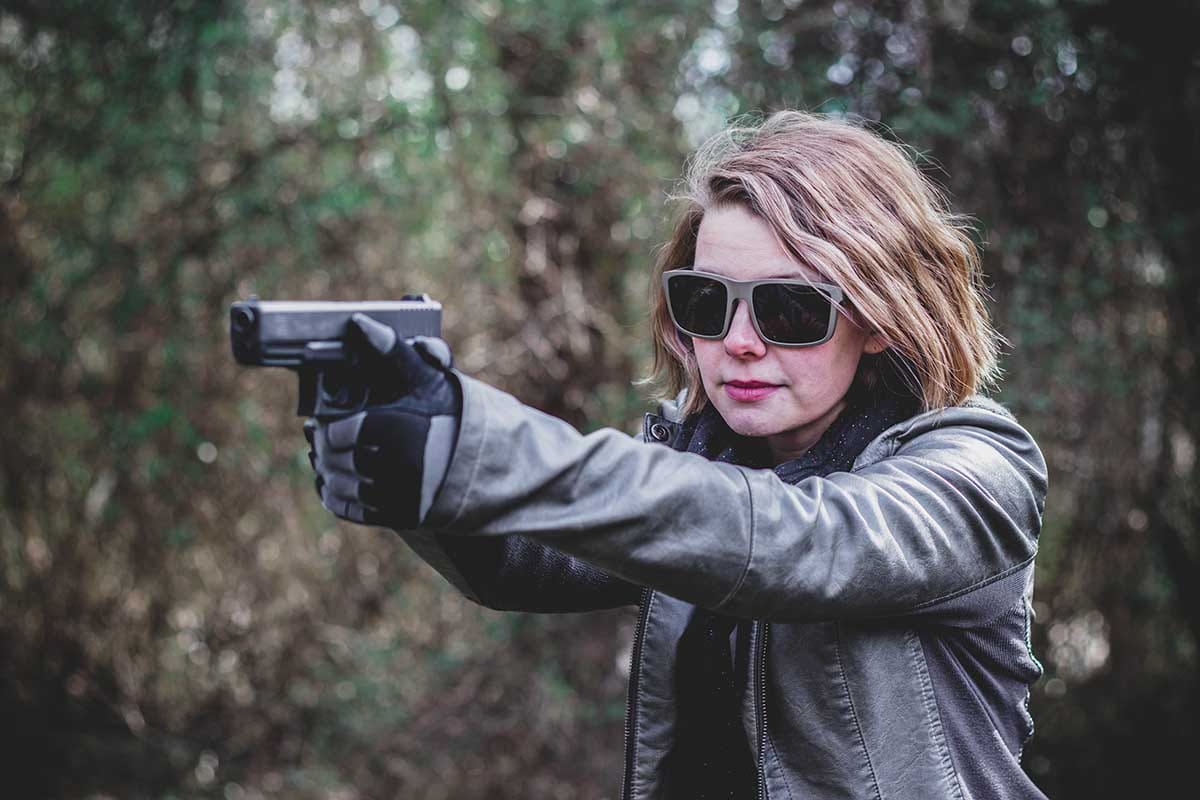 Polymer framed pistols, such as the pictured G19, have taken over as the popular choice for home defense. (Photo: Jacki Billings/Guns.com)

Starting in the 1980s, though, Glock paved the way for what now serves as the duty weapon for law enforcement across the country. The Austrian-company built a gun that directly addressed expressed needs of military and law enforcement leaders. They needed a lighter gun that could hold more bullets. So, Glock introduced the Glock 17, a full-size polymer-framed handgun chambered in 9mm.

The appeal to the design was that it’s lightweight, easy to use, and has a magazine that holds 17 rounds. Over the decades, a host of companies have adopted these characteristics of a duty weapon and offered their own, and in some cases, improved versions.

Today, the most up-to-date duty pistol is chambered in 9mm, .40 S&W, or .45 ACP. It features a polymer frame, an internal safety rather than manual thumb safety, interchangeable grips, ambidextrous controls, a Picatinny rail for mounting a light or laser, and the slide will be optics-ready. What’s good for the goose is good for the gander. 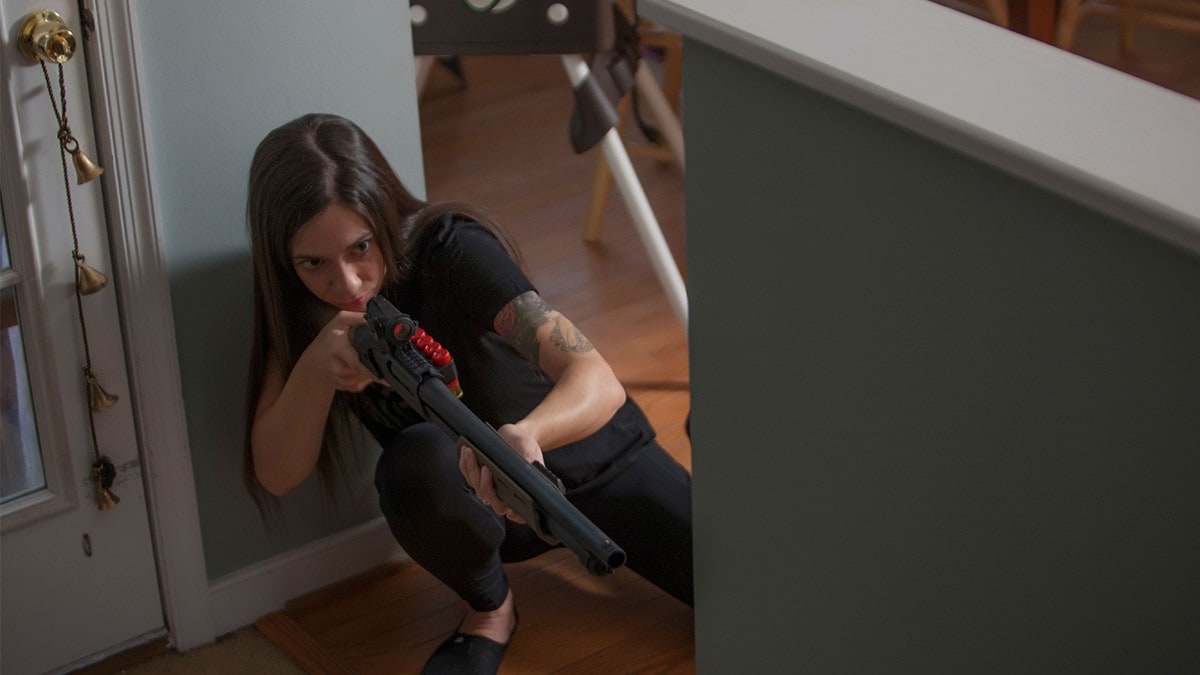 The pump-action shotgun is a favorite among some in the home defense community. (Photo: Guns.com)

The second-most logical choice for home defense is a shotgun because they’re easy to use to address a threat. Unlike a handgun or rifle, shotguns don’t require precision accuracy to hit a target. A shotgun fires shotshells instead of a single projectile. The shot is comprised of small pieces of metal that look like ball bearings. As they fly through the air, the spread covers a wider area with a tremendous amount of energy like a small net of death.

While there are multiple shotgun actions, the most common for home defense are of the pump-action variety. While some argue that’s because the mere sound of working the pump strikes fear in the hearts of home invaders, the more plausible explanation is they’re easy to use, easy to maintain and inexpensive. 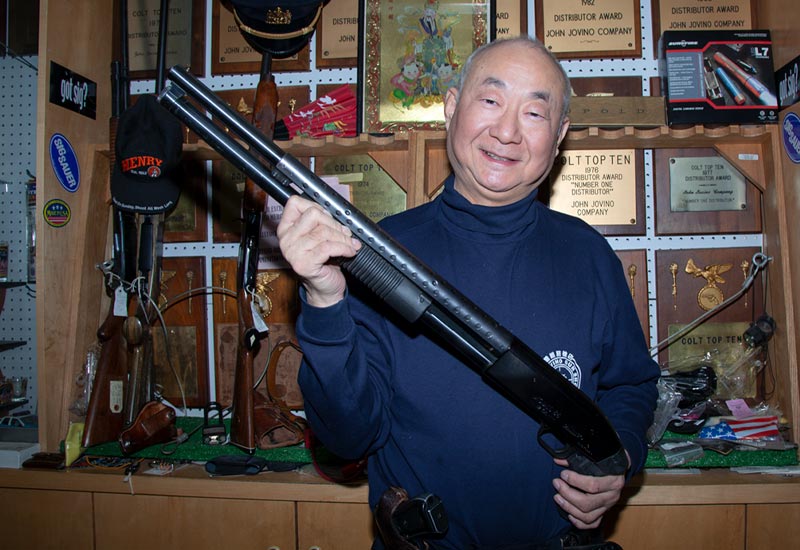 Then, shotguns are also versatile. You’ll have a better chance of fending off a wild animal from a medium distance with a shotgun than with a handgun. Practically speaking, a home defense shotgun functions the same as a hunting shotgun. More to the point, a plain Jane pump scattergun will serve just as well as one decked out with tactical features. But, if those tactical features give you peace-of-mind, so be it. America is a free country, after all.

The drawback to home defense shotguns is limited maneuverability. Without proper training and practice, a shotgun is difficult to safely handle in an enclosed space. According to federal regulators, the shortest barrel available for a shotgun, to keep it under the mandatory 26-inch overall length, is 18 inches. However, gun makers have found ways to make a shotgun feel shorter than it really is. By changing certain characteristics of the design — like removing the stock and shortening the barrel — it can become a 12- or 20-gauge “firearm” instead of a shotgun. Maintaining that mandatory minimum length allows the design to be sold like any other firearm. 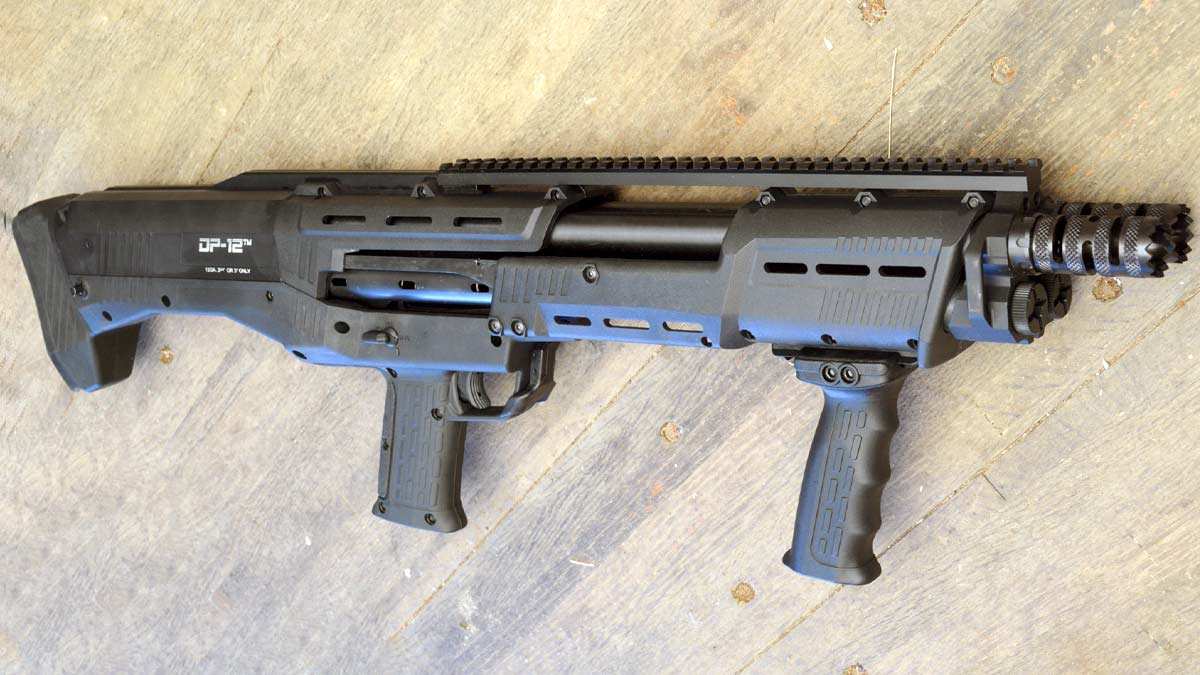 Another drawback to shotguns is limited magazine capacity, which is often tied to the length of the barrel, or more precisely the tube that rides beneath the barrel. Typically, the feature only allows for five 12-gauge shells and requires a somewhat time-consuming reloading process. To address that issue, gun makers have started offering shotguns with detachable magazines or they apply novel feeding designs.

In 2011, Florida-gun company Kel-Tec introduced the Kel-Tec Shotgun, or KSG, to the U.S. This shotgun featured a bull-pup design, meaning the action was placed behind the trigger. This allowed designers to utilize two magazine tubes with an expanded capacity of seven rounds apiece. Now, a variety of gun makers, all trying to keep pace with one another, are offering features to expand magazine capacity.

Today, there are plenty of opportunities to find a maneuverable shotgun design with a capacity that could stop a threat two-times over. But if you’re comfortable with a good-old fashion pump with a five-round tubular magazine, that works, too. 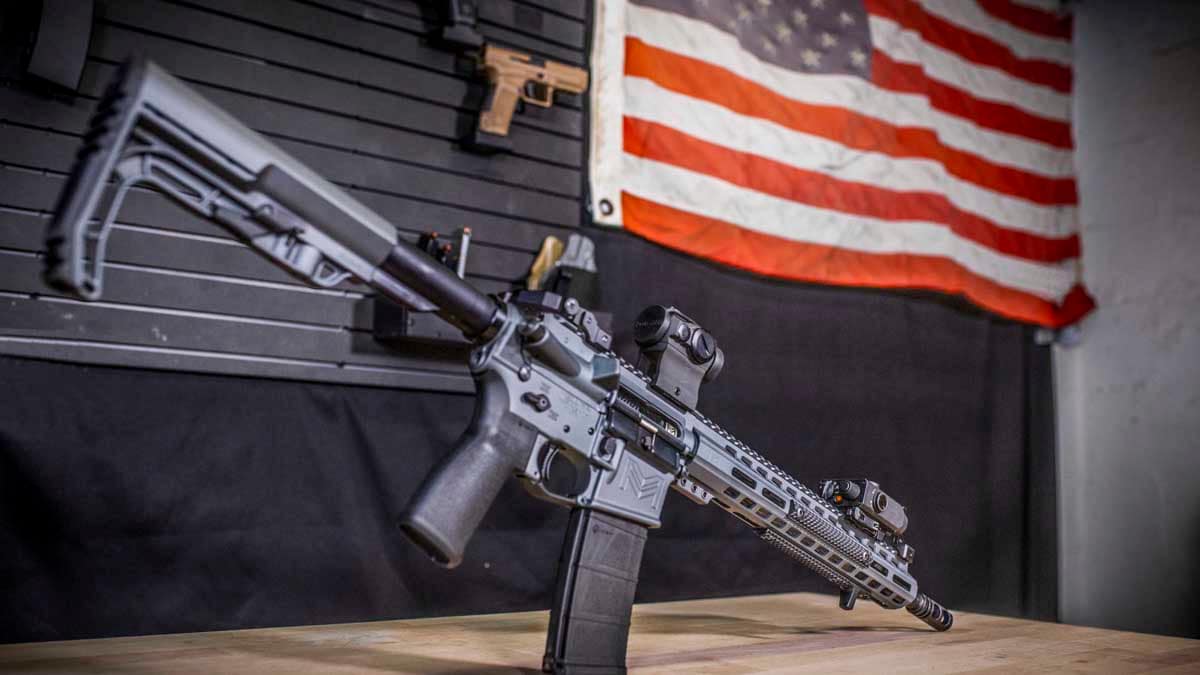 At last, we get to rifles for home defense. A rifle will send a projectile through the air with greater velocity, distance, and accuracy than a handgun or shotgun. These attributes make a rifle the best option to engage faraway targets but also a less practical option for close range.

While a rifle’s long barrel limits maneuverability, a key argument against rifles for home defense is over-penetration. The fear is a rifle round, if discharged inside a house, could pierce through drywall and hit an unintended target. But this is America where the AR-15 is considered a modern-day musket. A symbol that reminds the government that U.S. citizens have an inalienable means to stand up to tyranny. So, if you’re trained and that’s what you prefer, there’s your answer. 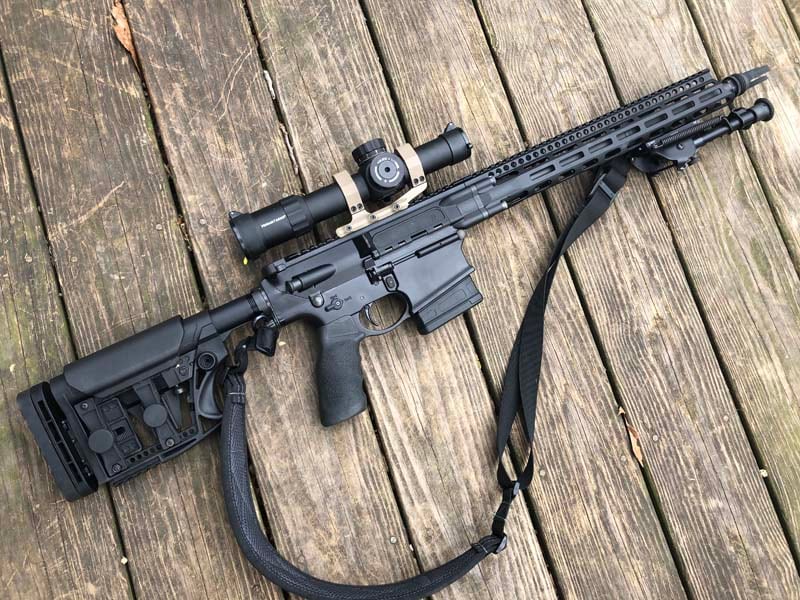 Aesthetically, there’s little difference between the platforms, but the AR-10 is no easy layup for a gunmaker as the design, which served as a precursor for the AR-15, as it handles a heavier round. Yet, Daniel Defense’s take on it is quite possibly one of the best available. (Photo: Ben Brown/Guns.com)

However, there are reasons to prefer an AR-style rifle for home defense than just a sense of civic duty. They’re dubbed the “modern sporting rifle” because of their broad appeal. They have standardized controls and are highly modifiable. A standard AR-15 chambered in .223/5.56mm is easy to use, has very light recoil, and uses a magazine that holds 30 rounds. Plus, you could attach just about every range of toy and trinket available.

Unlike shotguns, there’s no workaround barrel length and the stock cannot be removed. If either is done, the act legally makes it a different type of weapon. The former makes it a short-barreled rifle, which is highly regulated, and the other turns the design into a pistol. As of a few years ago, however, a compromise was found. 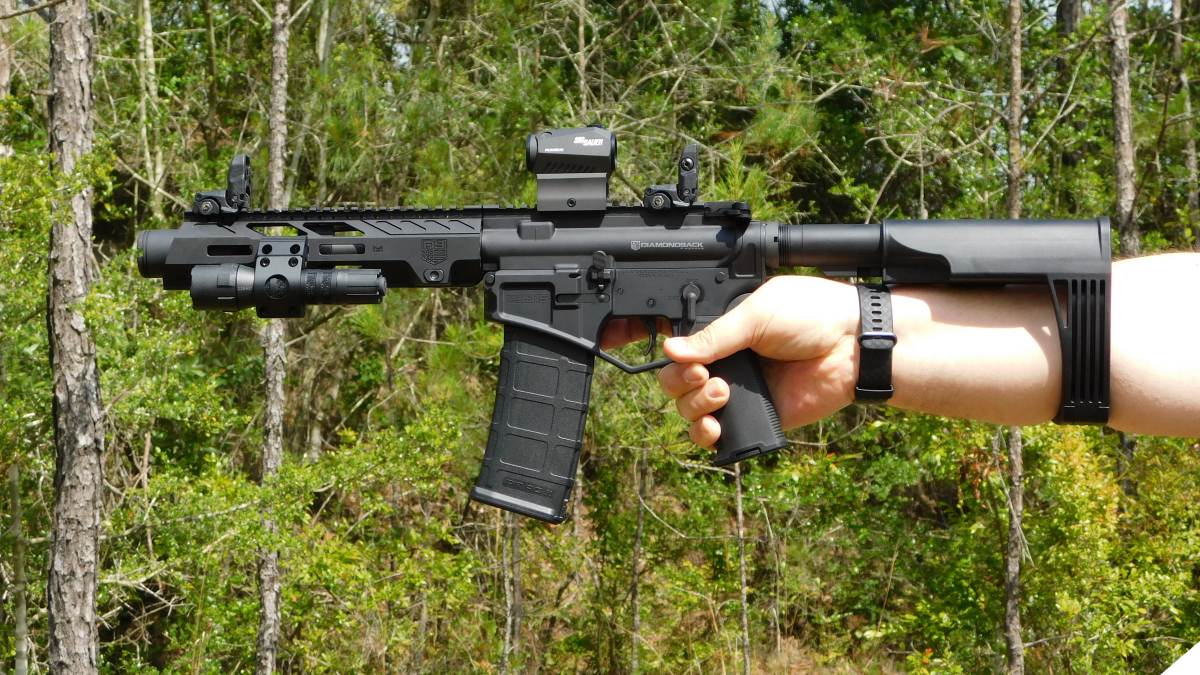 Circa 2012, Florida-based gun accessory maker SB Tactical introduced a stabilizing brace for the AR-style pistol. While the device was intended to fit around your forearm, there’s a general understanding — that’s been reviewed and approved by federal regulators — that you might shoulder the brace.

Since then, variations of the design have been released. Some of which are referred to as a flap rather than a brace. Nonetheless, since the device attaches to a pistol, there’s more flexibility with length and in turn greater maneuverability. With everyone wanting a shorter AR, gun makers have taken to extending their AR line up to include an AR pistol equipped with a tactical brace.

Walk into any gun store or gun forum and you’ll hear arguments advocating the merits for every type of gun, action, caliber, and brand. Do those specific characteristics matter? Certainly. But treat them as guidelines rather than gospel. At the end of the day, the best home defense is the one that you can handle safely and competently.

For a great selection of firearms, check out the Guns.com Vault and collection of Certified Used Firearms.