How to Make the Most Fun for a Family Range Trip

A home range gives you access to some pure American family fun, but there’s more to consider before setting up some empty soda cans and grabbing an old plinker. So, I invited Chris and his son James to demonstrate how to operate a home range.

At 12-years-old, James was more safety-conscious than most shooters. While he’s more involved in the shooting sports than most kids, his dad introduced gun and hunting safety to him at an early age.

Chris explained that he wanted to give James the same experience that he had when he was a kid. Chris’s dad taught him to shoot as well. “I started shooting when I was 10. I got my first BB gun and it was the greatest gift I ever got, so I wanted to start James along that path,” Chris said.

So, when James turned eight and got his first BB gun, they started on gun safety lessons. Then, he became more proficient with his BB gun, Chris decided James would be ok handling something with a little more power and accuracy. “I have a CZ 452 that I really love and I searched around and found him a CZ 452 Scout, so it’s just like mine but kid sized,” Chris said. 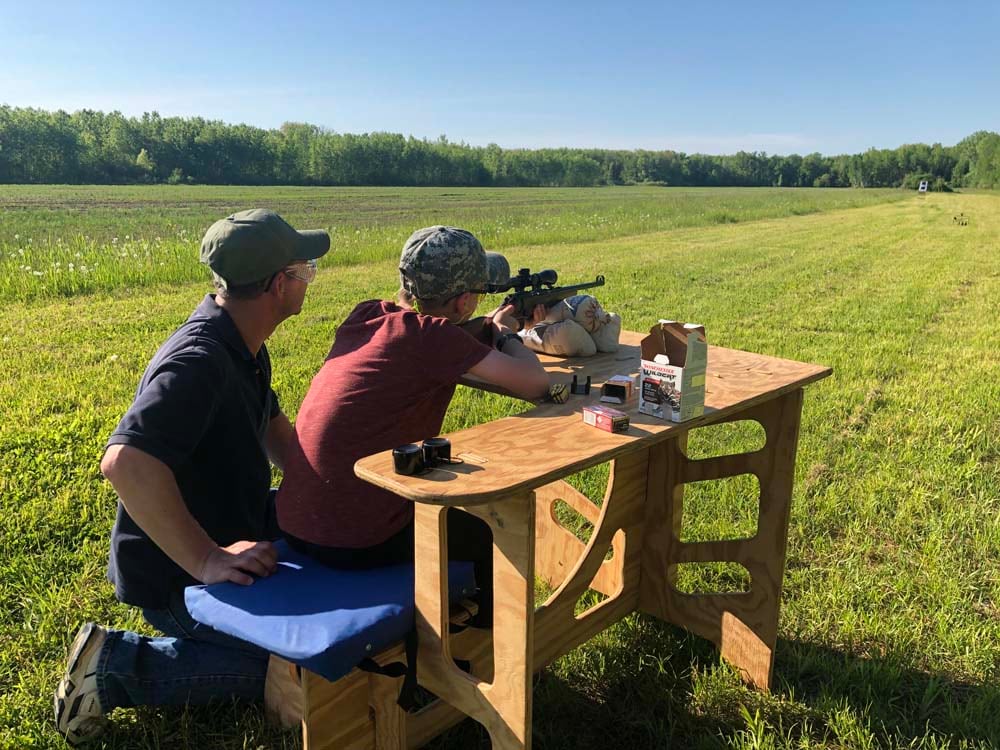 James showed off his first “real” rifle, this youth sized CZ bolt action .22LR gifted by his father Chris. Not only did James demonstrate proper safety in loading, muzzle direction, and firing, but he shot with incredible accuracy, ringing the steel and punching out bullseyes at 50-yards! (Photo: Kristin Alberts/Guns.com)

“I got it for my (ninth) birthday and it was probably one of the best birthday gifts I’ve ever gotten,” James said.

With the new rifle, they hit up the range and practiced the fundamentals. “He wanted a scope right away and I told him ‘no,’” Chris said and explained he wanted James to learn how to shoot with open sights first.

From age 9 to 12, James practiced with open sights. As promised, though, Chris gave him a scope after he mastered the basics. “So, I lost my scope and we put it on his rifle,” Chris said. “We’ve had a lot of fun shooting with open sights and with scopes.”

“When I started with the open sights, it was funny, because I would look at targets from a long range and just — they would disappear — and I was like ‘where are they?’” James said, recognizing the need to master the fundamentals before upgrading equipment. James bears down with the Ruger Mark IV Target pistol in .22LR. His practice with a proper pistol grip and knowledge of iron sights helped him ring the steel. (Photo: Kristin Alberts/Guns.com)

For this demonstration, we set up a mix of reactive and paper targets, but a benefit to a home range is that it doesn’t always need such an organized set up.

Using a scope, Chris and James pickoff staged clay pigeons, quarters or whatever is available. “We have some competitions and contests. I can usually come out ahead, but on a good day he can take me down,” Chris said.