The CZ Scorpion Evo 3 and Sig Sauer Copperhead are two pistols prime for comparison. One major appeal for both of these guns is that equipped with the stabilizing brace they liken to a Pistol Caliber Carbine. While the brace was intended to secure around a shooter’s forearm, shouldering the device has been labeled acceptable by federal regulators. Outside of intended use, though, they’re very different guns. The Scorpion, of the K configuration, is a tried and true favorite of PCC shooters. The Copperhead, branching off Sig’s MPX line, is new for 2019. And, I just so happen to have both. 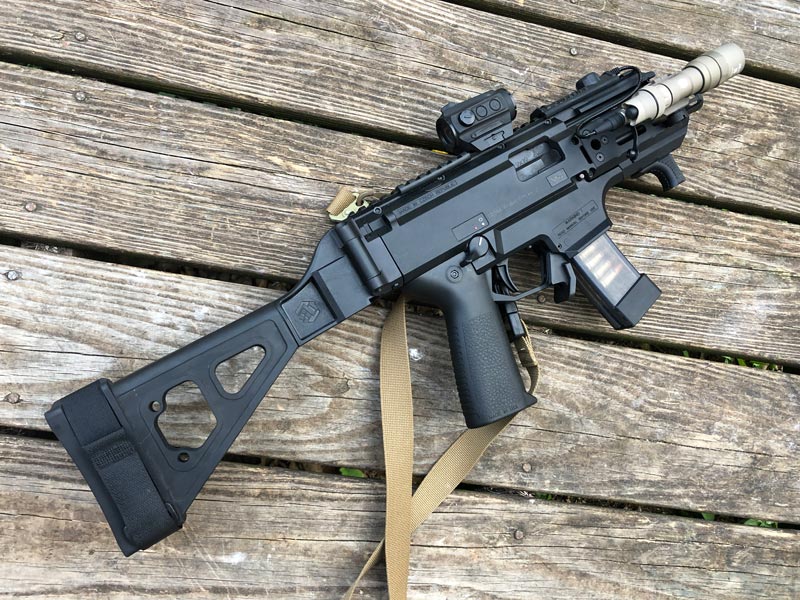 Starting with the time-tested the CZ Scorpion Evo 3, the design measures in at 16 inches and weighs 5 pounds. Anyone familiar with the Heckler & Koch MP5, one of the most iconic sub guns in history, will understand how to operate a Scorpion. The semi-automatic design fires off 9mm cartridges using a blowback operating system. Features include a threaded barrel, an adjustable grip and sights, ambidextrous thumb safety, Picatinny rails running on all four sides of the frame around the barrel, and a 20-round magazine. 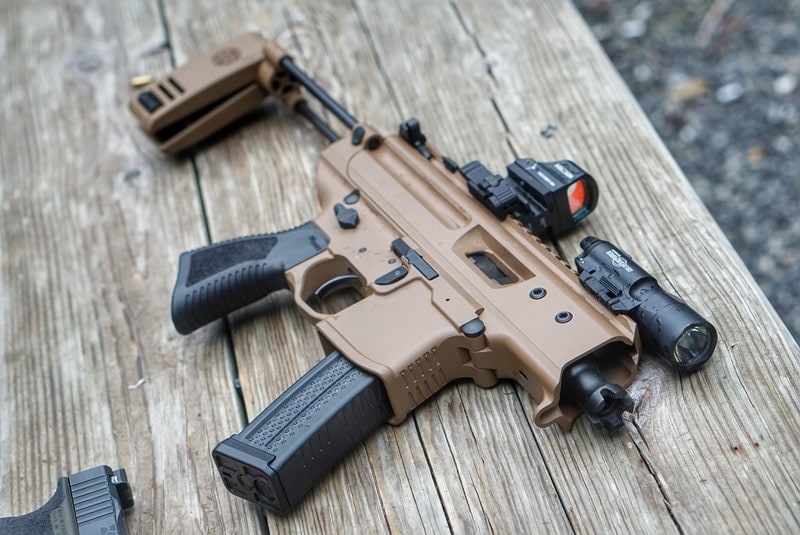 Measuring in at 14.5 inches and weighing 4.5 pounds, the Sig Copperhead is the smaller of the two guns. For those familiar with AR controls, the Copperhead should be a piece of cake. The selector-switch, charging handle, and mag release are all in the same spots as any AR-style firearm. On top of that, the Copperhead uses a gas-piston operating system, a growing design trend for many AR makers. Instead of 5.56mm, Sig says the gun is configured to shoot any weight and brand of 9mm ammo. Features include a full length Picatinny rail running along the top, a flash hider, a wire arm brace, and a 30-round magazine.

Operating on the Range

If you shoot at lot of ARs than you might favor the Copperhead over the Scorpion, but you still need to be conscious of the fact that the Copperhead is a much smaller platform than a standard AR. It’s apparent when performing reloads. During the process, it’s easy to get your support hand beyond the built-in hand stop. The fear being you could burn yourself on a hot barrel or, worst case scenario, send a round through your hand. Other than that, there wouldn’t be much of a transition from an AR.

On the other hand, diehard MP5 fans who have longed for a last-round hold open may lean toward the Scorpion. Loading, safety manipulation, and tac reloads will feel very similar to the iconic MP5. The non-reciprocating side charging handle is located forward of the upper receiver and you can even perform that oh so satisfying “MP5 slap” when charging the gun.

When reloading the Scorpion on the fly you will need to use the paddle mag release while simultaneously stripping the empty mag. I found the Scorpion’s bolt release located on the side of the receiver fast and easy to use. One point of contention, though, is the stiff ambidextrous safety selector, but it breaks in over time. 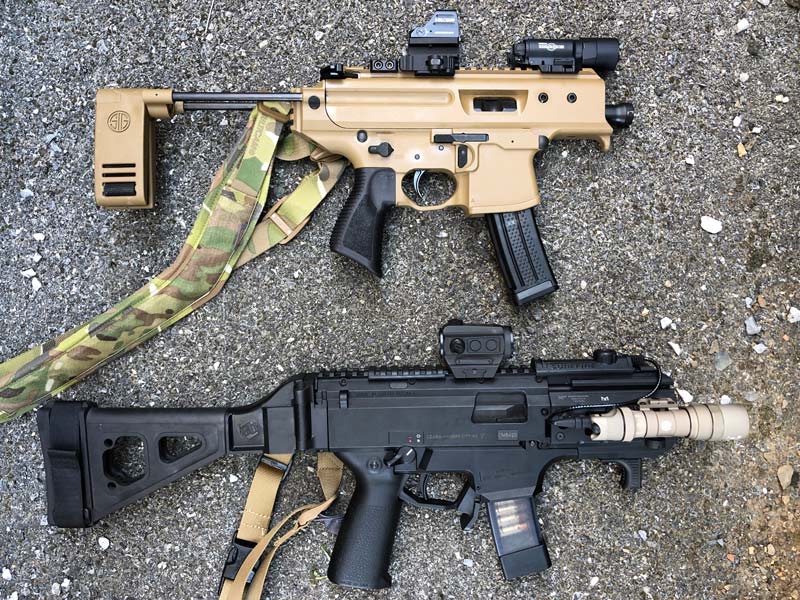 For me, I have to side with the Scorpion, but it’s because I’ve owned mine for over a year and have sunk some serious coin into it. I’ve made modification and purchased a dedicated suppressor. What could make me switch teams and go Copperhead? I really, really – really – like the smaller profile and AR-15 controls. To fully commit, though, I would have to add a threaded barrel and replace the wire arm brace. It’s just how I would prefer to use the gun.

If you’re looking for a substitute for a PCC or just want a great sub gun, both the Scorpion and Copperhead are great options. Operationally, they’re very similar and reliable shooting 9mm ammo. Although they measure in differently, the size and weight distribution are both well balanced. In fact, I’d go so far to say that they are the top two sub-guns available on the market today.