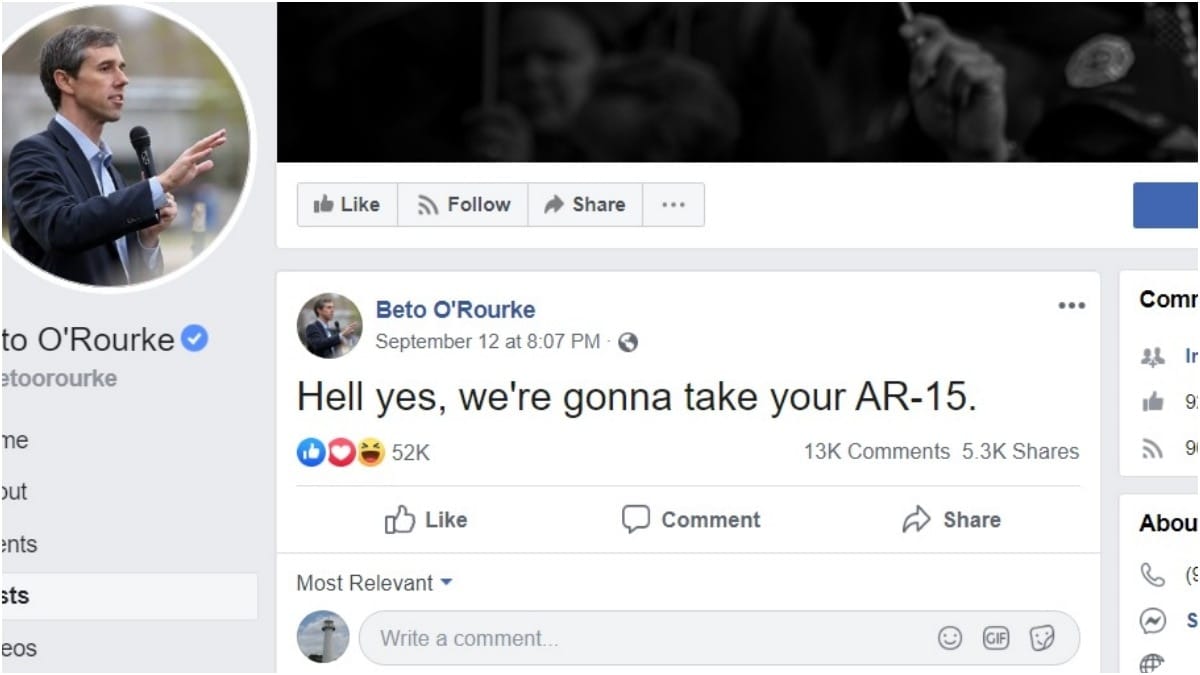 Last Thursday, Beto O’Rourke made sure there was no ambiguity when it came to his feelings on AR-15s and similar semi-auto rifles. (Photo: Screenshot from Facebook)

While speaking at the third 2020 Democratic Presidental Debate on the campus of Texas Southern University in Houston, Texas, O’Rourke, joined the nine other leading party candidates. When speaking of his extensive gun control platform, the former Congressman from the El Paso area was unambiguous about his intentions regarding implementing a sweeping ban on “assault weapons” coupled with what he terms “mandatory buybacks,” should he make it to the White House.

“Hell, yes, we’re gonna take your AR-15, your AK-47,” said O’Rourke, a statement he stood behind immediately afterward when asked for clarity. Further, his official campaign website began hawking tee shirts repeating the phrase with purchases going back into the Beto for America effort.

National anti-gun groups such as the Brady Campaign directly applauded, “O’Rourke’s impassioned calls to keep assault weapons off our streets,” while Everytown and Giffords offered more muted praise for the overall gun rhetoric of the candidates at the debate. Former U.S. Rep. Gabby Giffords said it was all in keeping with an effort to “find a leader with the courage to defeat [President] Trump and enter the White House on day one ready to be our Gun Safety President.”

Meanwhile, Second Amendment organizations such as the National Rifle Association and firearms industry trade groups like the National Shooting Sports Foundation slammed Beto’s ideas on gun grabs. The Citizens Committee for the Right to Keep and Bear Arms said that O’Rourke’s candor bares the left’s true intent on gun control.

“From this moment forward,” said CCRKBA Chairman Alan Gottlieb, “when Democrats talk about ‘gun reform’ or ‘gun safety,’ the whole country will know they’re not just talking about gun control, they’re talking about taking firearms from law-abiding citizens who have committed no crime.”

Industry estimates are that the number of semi-auto modern sporting rifles in circulation in the country, such as the AR-15 and AK47, top 16 million.