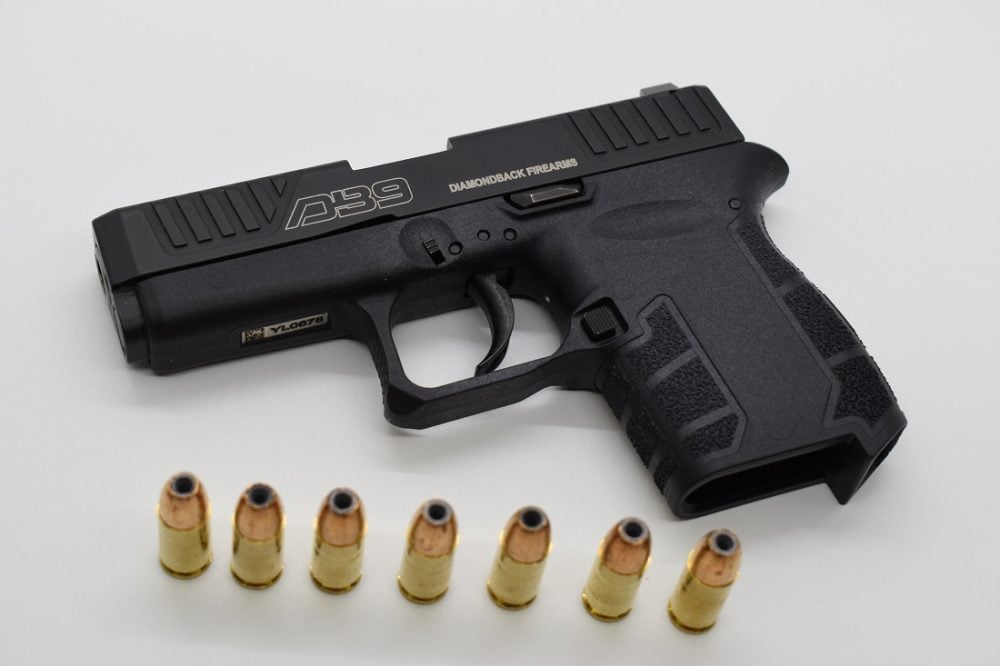 The Diamondback DB9 Gen 4 brings 6+1 rounds of 9mm parabellum to the party in a pint-sized package. (Photos: Chris Eger/Guns.com)

We looked at Diamondback Firearms’ newest version of their micro-compact DB9 9mm pistol, the Gen 4, and compared it side-by-side with some of its contemporaries.

Recently introduced by the Cocoa, Florida-based gunmaker, the DB9 Gen 4, with a weight of just 13.4-ounces while maintaining a 3.1-inch stainless steel barrel that gives an overall length of 5.73-inches, Diamondback describes their gun as the “smallest and lightest” 9mm on the market. With a flush-fit magazine shoe installed, its height is 4-inches flat. The maximum width is 0.89-inches. We’ll take a comparative look at what that means in a minute.

The original DB9 was first introduced in 2009 and the new and much-updated Gen 4 version has a lot of improvements over the initial gun that go way past style. These include a slide lock lever, and improved trigger pull with a shorter reset, and updated grip with better ergonomics, and a rating for +P ammo. Standard features include front and rear slide serrations, a 6+1 magazine capacity, steel (not plastic) sights that are compatible with Glock aftermarket replacements, and a captive recoil spring that helps with field stripping. 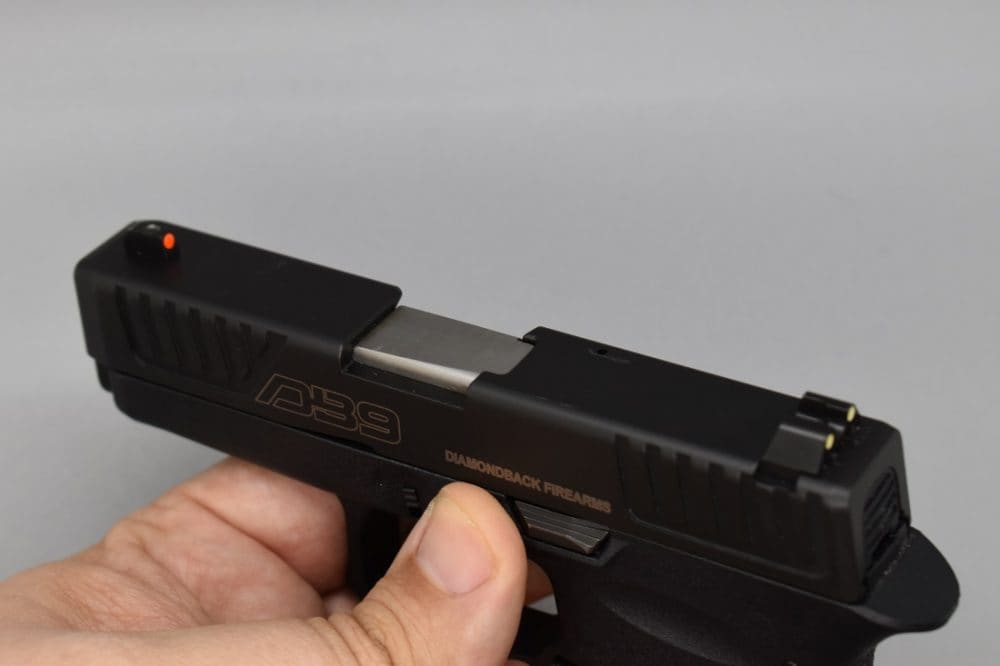 The replaceable sights include a red front post with green rear dots while night sights are readily available. Note the front and rear slide serrations and fenced slide stop lever 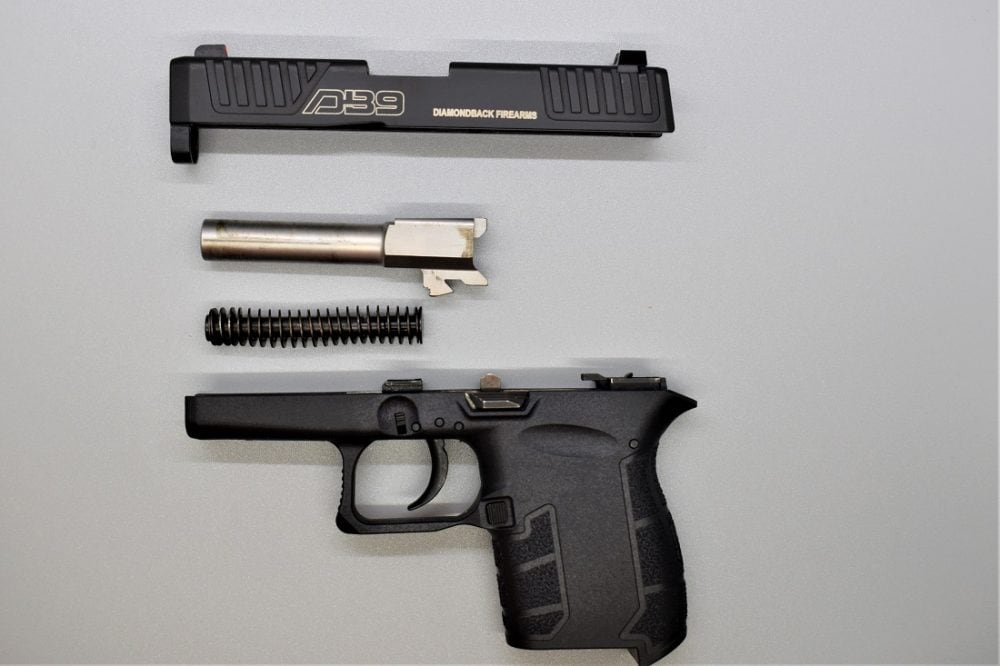 Field stripping for cleaning is simple, with anyone familiar with breaking down a striker-fired pistol able to pull it off without tools. The captive recoil spring helps with field stripping in the respect that you won’t have to chase it down after it shot across the room. 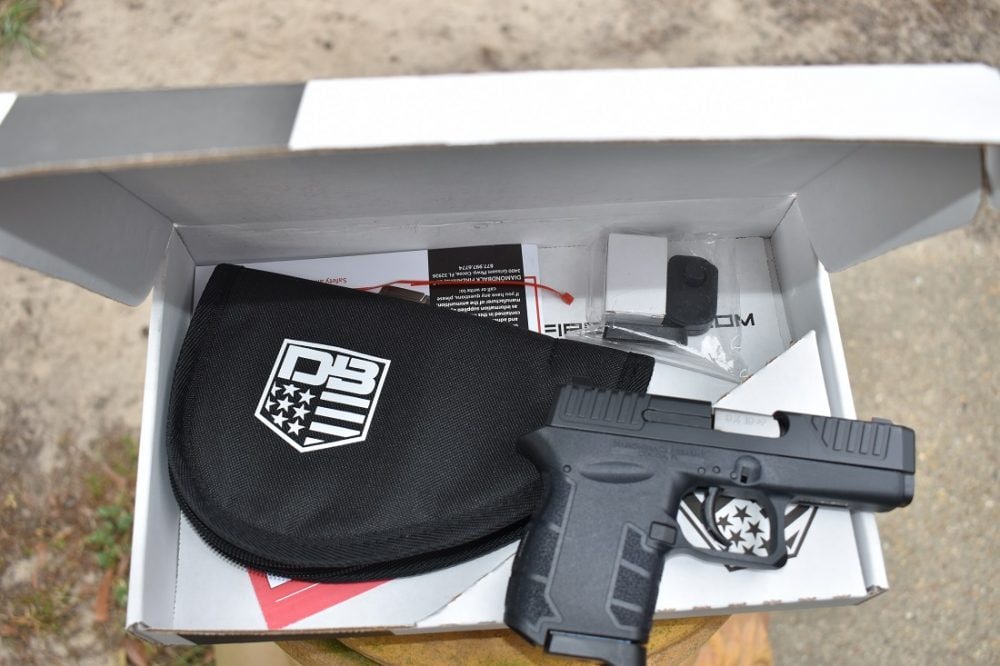 You can say a lot about the DB9, but Diamondback doesn’t believe in nice boxes. The gun ships in cardboard but includes a zipper bag for storage. It ships with a single mag, but extras are cheap (under $20) and the box includes both a finger extension floor pad and a flush example to allow the user a choice. 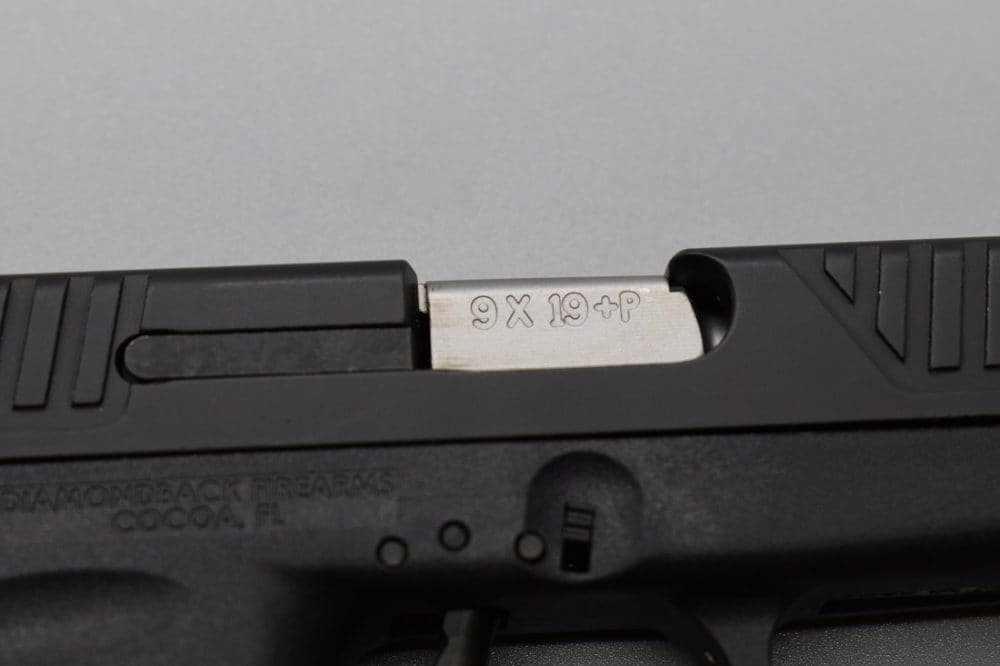 While popping spicy 9mm +P out of a 13-ounce gun doesn’t sound fun, the DB9 Gen 4 is rated for the task. 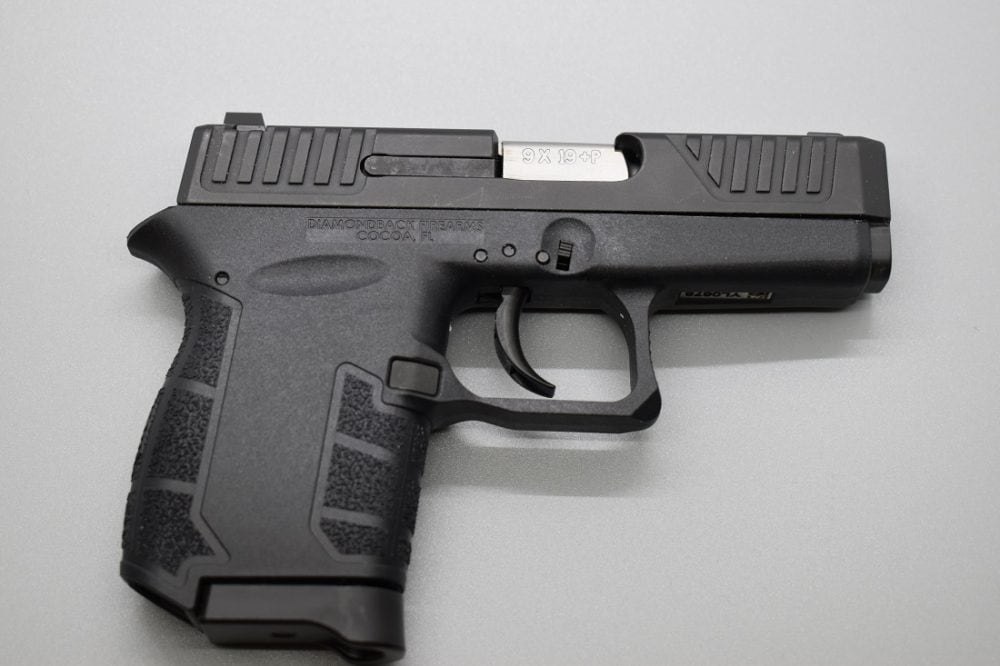 The redesigned grip has front and rear stippling with a smooth midsection. Those with the free time and an unhealthy proclivity to disfigure plastic with a soldering iron can change that to suit their own needs. 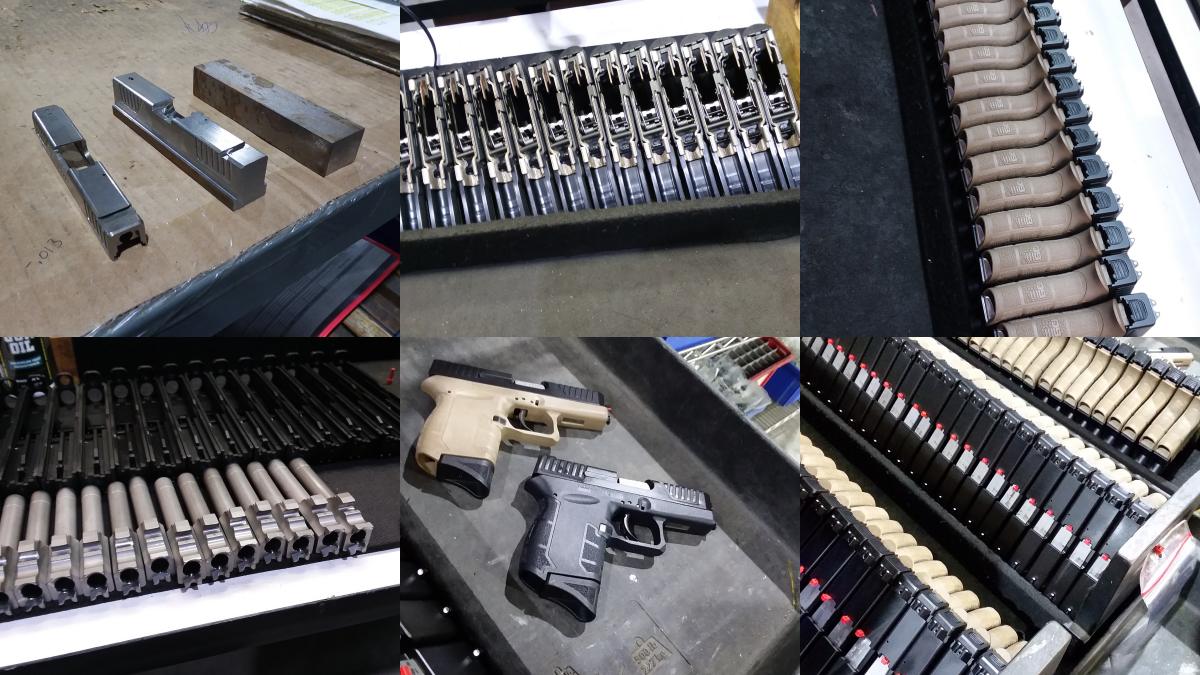 The Gen 4 DB9, as with all Diamondback firearms, are made wholly in the U.S. Of note, the slide barrel, and internal parts are coated to resist corrosion and the gun utilizes steel sights and a steel mag catch. 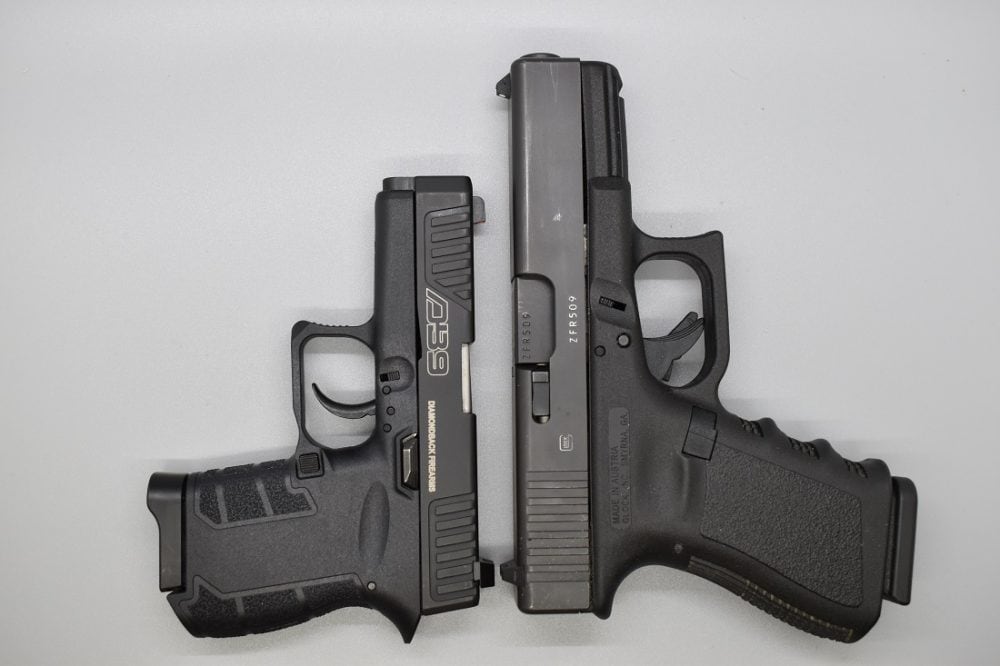 When compared to a compact 9mm, such as the Glock G19, the DB9 Gen 4 is a much-reduced envelope, though granted, it only has half the magazine capacity of this double stack. However, even when compared with the 18-ounce/6.26-inch Glock G43, it is still notably smaller. 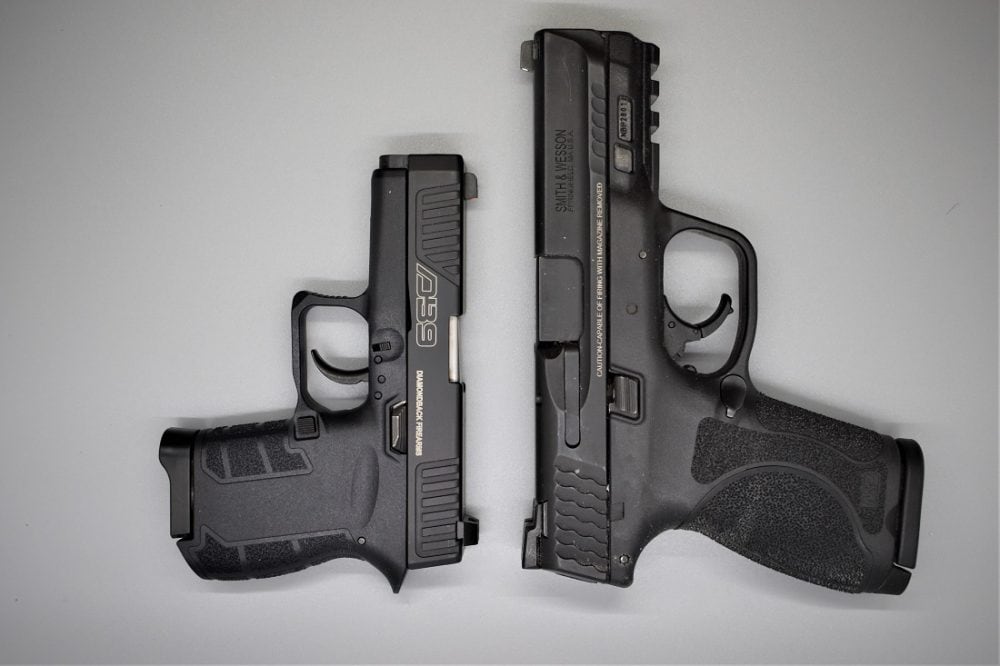 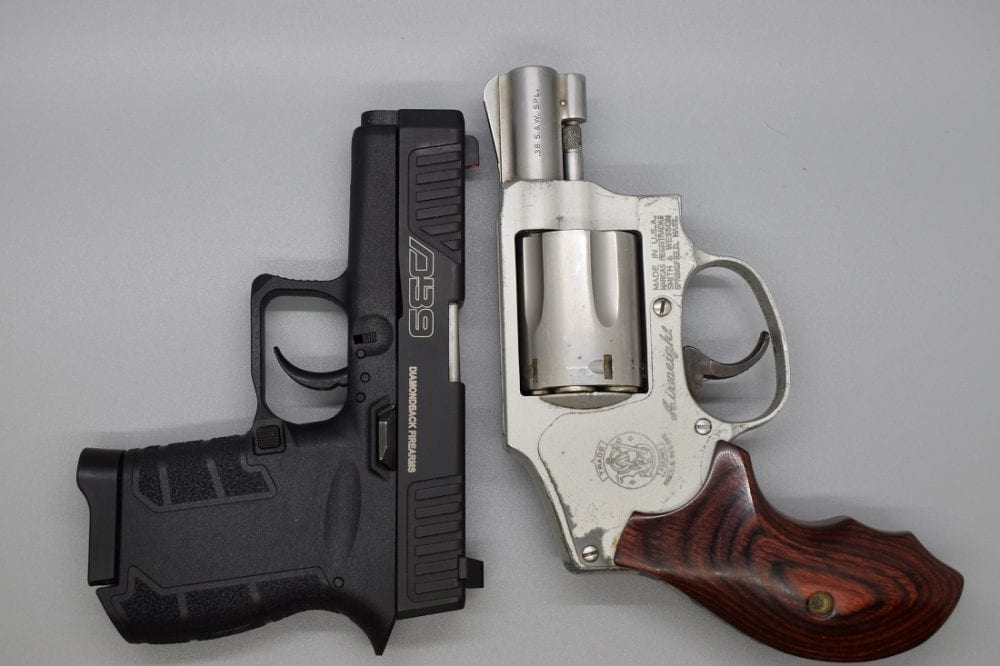 Here is a stack of the DB9 against the iconic pocket roscoe: The S&W J-Frame. As witnessed by this S&W M642, the DB9 is still smaller and a tad lighter. Plus, it can carry seven rounds of 9mm as opposed to five of .38. 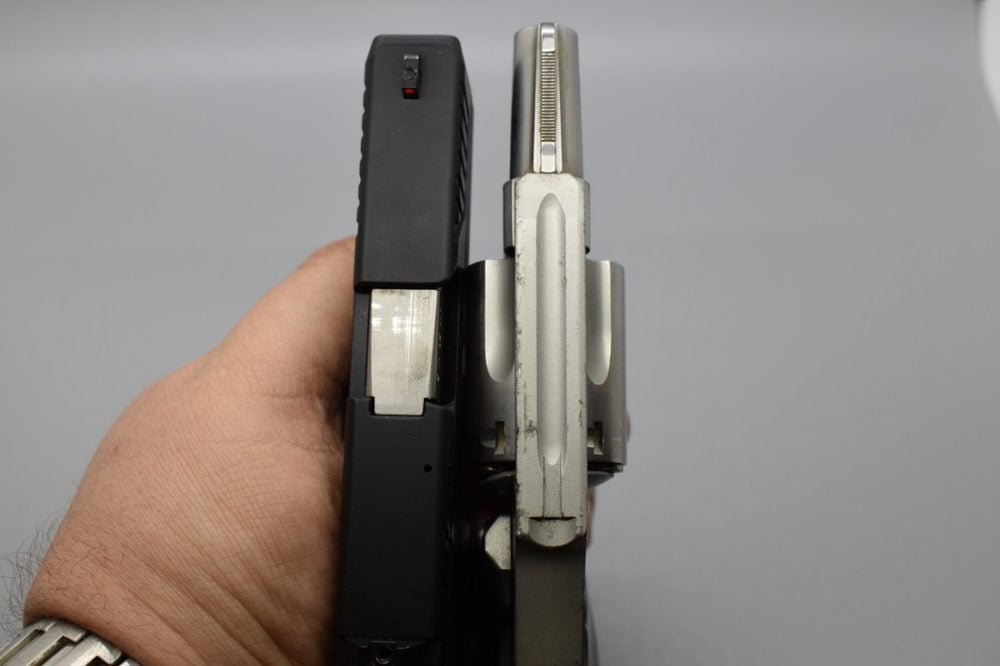 Further, the DB9 is downright skinny when the width is brought up and the Smith falls in alongside. Also, the DB9s barrel length and sight picture in both cases is an improvement, along with the faster reload. 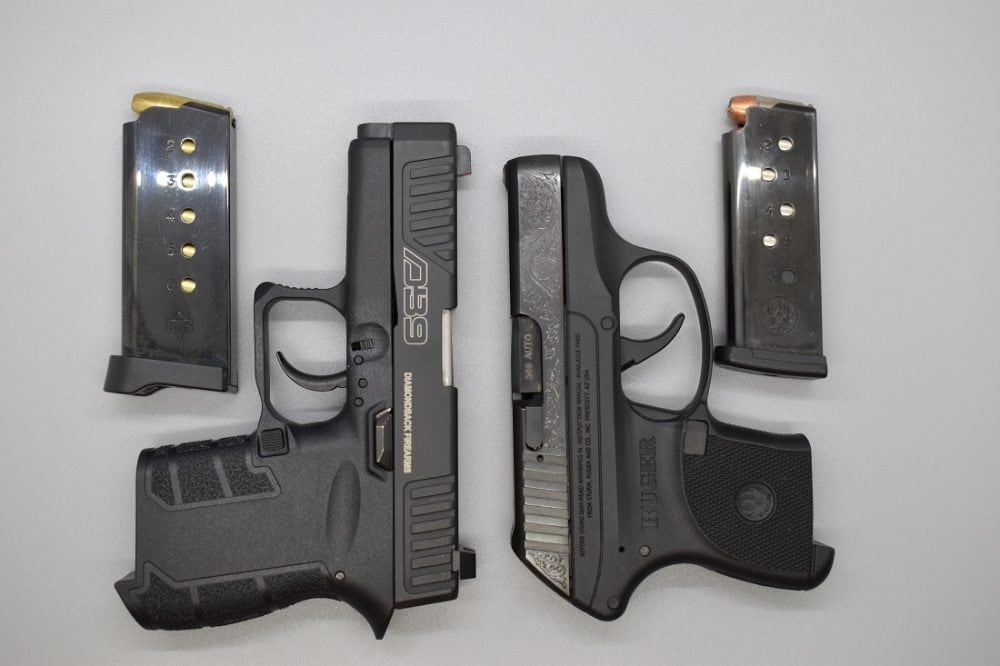 A more apples-to-apples comparison is between the DB9 and the Ruger LCP I. While the Ruger is smaller, you can also argue the Diamondback is chambered in 9mm, which has far more self-defense loads available than the LCP’s .380 caliber. Both guns have the same magazine capacity. 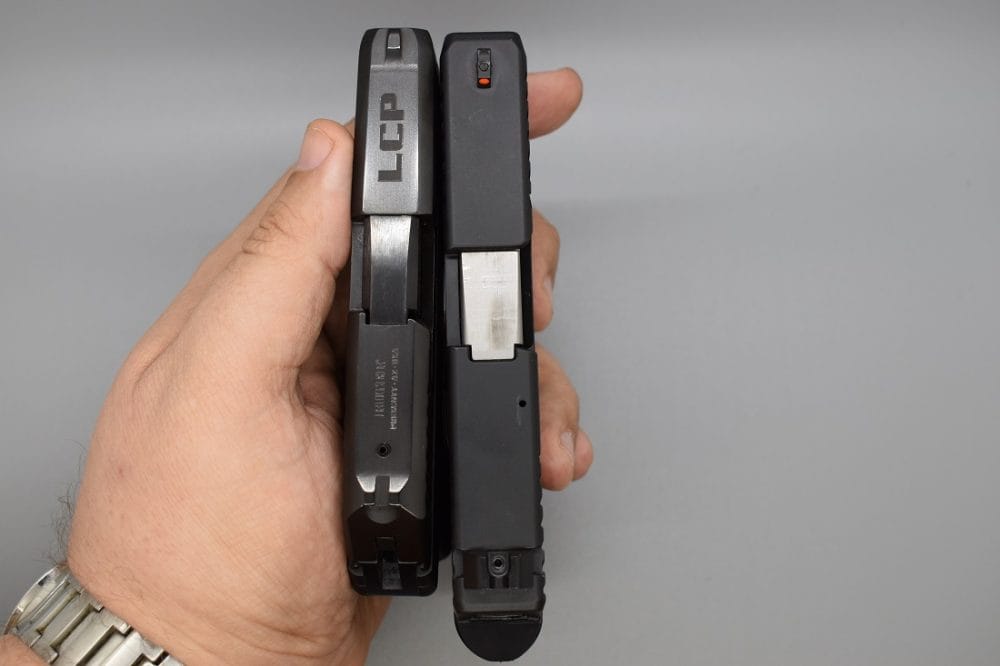 However, they are near identical in width, while the DB9 brings better sights and a longer barrel. When stepping up to Ruger’s LC9/EC9 series, which has a 3.12-inch barrel, that gun weighs in at 17-ounces, going larger than the DB9. 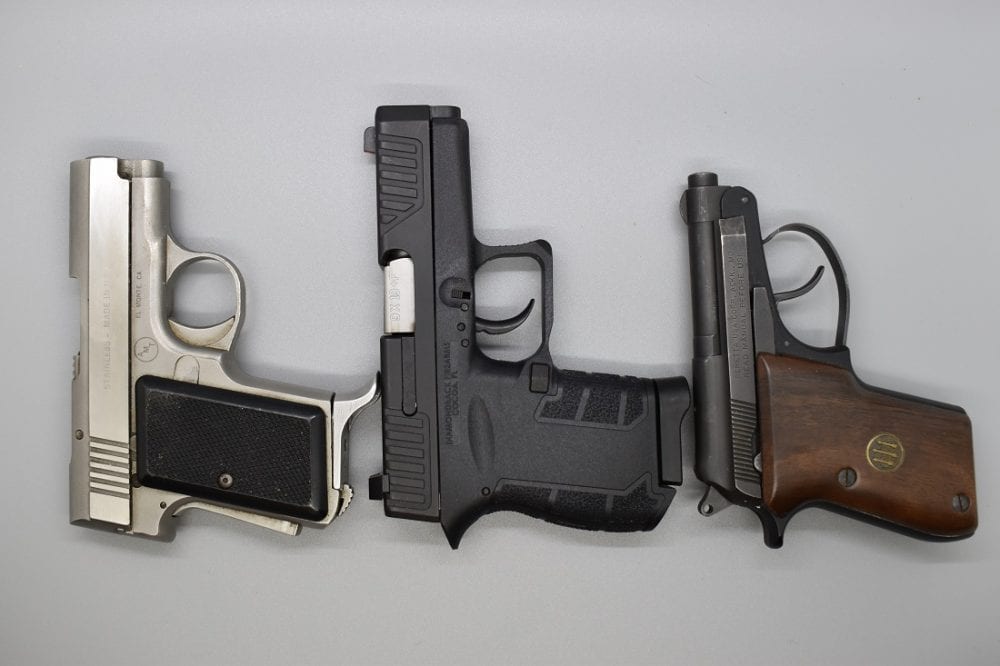 Even when compared to other “mouse guns” such as the AMT Backup and Beretta Bobcat .22LR, the DB9 is at least in the same ballpark while showing up to the ball with a larger 9mm chambering, better sights, and a longer sight radius. Moreover, height is nearly the same, an all-important issue when it comes to concealability. 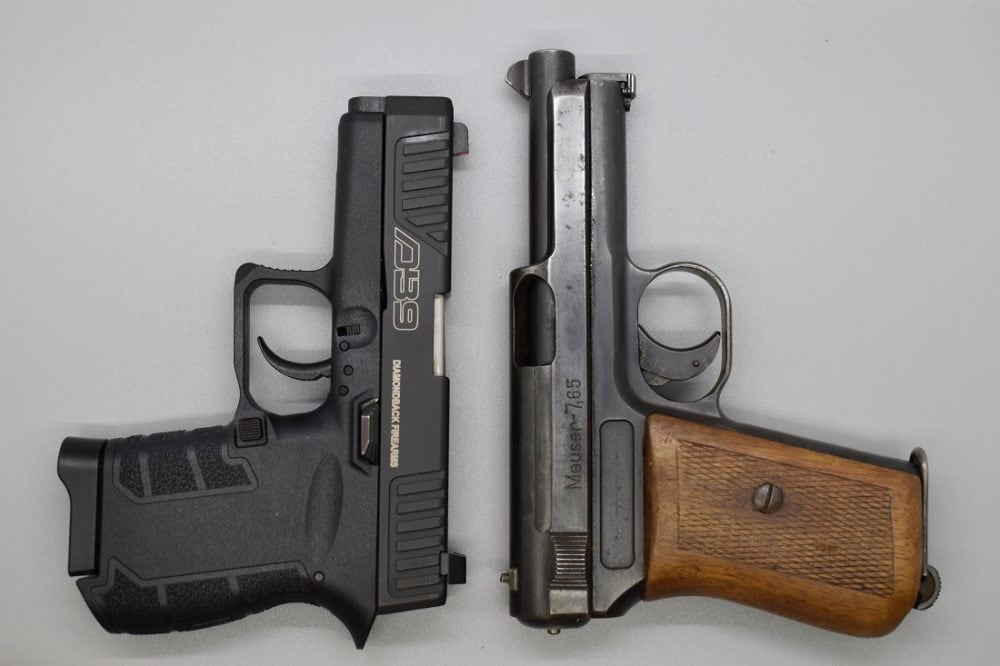 Even more dated comparisons with noir-period pocket guns, like this Mauser 1914 .32ACP, are enlightening. 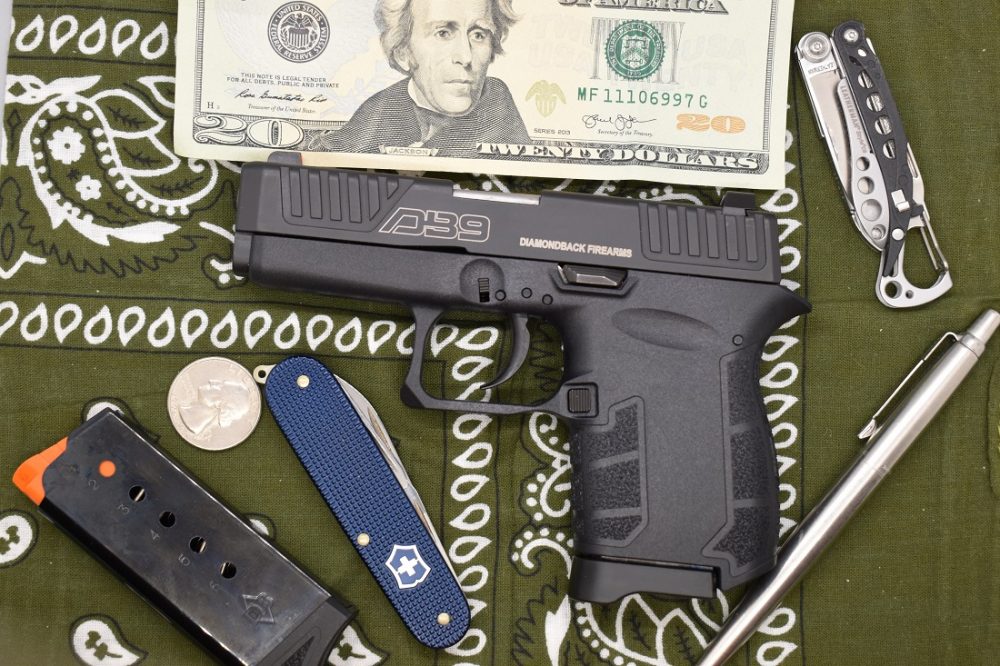 The DB9 Gen 4 is a pocket-sized 9mm single stack that has evolved from a decade of Diamondback’s experience with the platform and makes a good EDC choice for those counting grams and ounces, in need of a deep-cover gun in a non-permissive environment without switching to a .380 or smaller, or a back-up gun that won’t break your back– or budget. 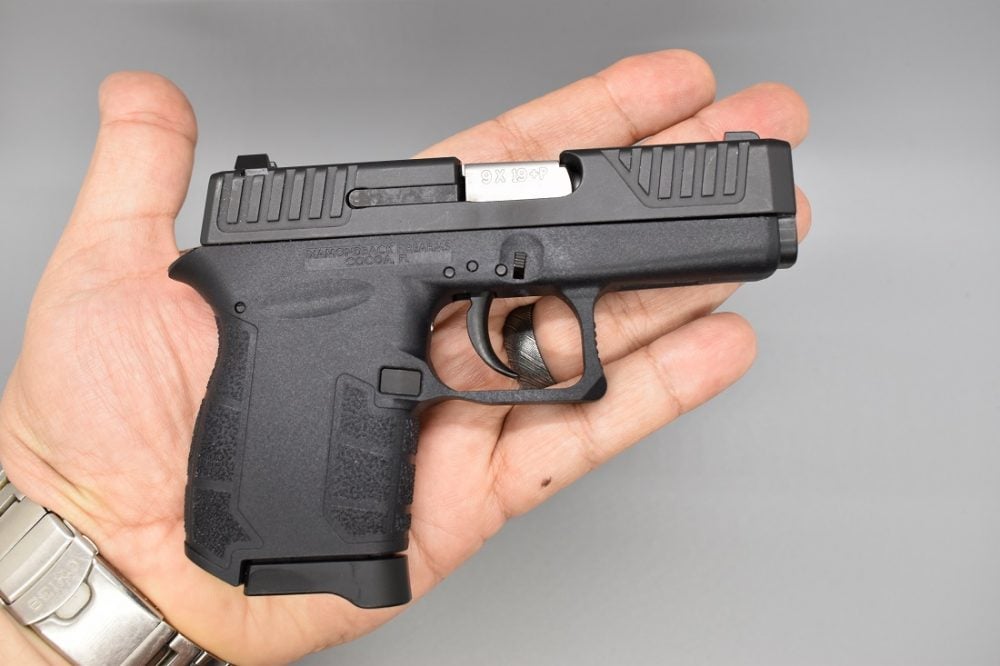 Some would even call it palm-sized, depending on the size of the palm. For $227 bucks, it is hard to beat in its price point when it comes to a 9mm pocket pistol.

Slim and with a lightweight profile, the DB9 Gen 4 has a lot going for it, especially for deep or carry in a nonpermissive environment or as a backup gun. How does it shoot and carry? We are currently working on that and will have a follow-up in a couple of weeks, so stay tuned.