Savage Arms is putting out so many different variants of rifles on their 110 bolt driven action that it’s difficult to keep track. While the High Country tops our list of favorite hunting rifles, the new Storm offers many of the same features and performance with a more affordable price tag. Here’s what a wild African Safari taught us about the 110 Storm.

Before going on any hunt, especially one halfway around the world, it’s critical to familiarize yourself with the rifle. Luckily, Savage’s Storm family of bolt action rifles are very much like the rest of the 110 lineup in terms of function. Like the High Country, it makes use of everything “Accu” meaning it’s outfitted with AccuFit, AccuStock and AccuTrigger.  The grey and black synthetic stock uses rubberized grip panels at both the pistol grip and forend, which clearly set apart the LOP spacers and comb adjustment shims. The Storm is unassuming with its grey and black synthetic furniture but Savage classes it up a bit with the matte stainless metalwork. The Storm caps off its design with a detachable dropbox magazine that holds four rounds.

The new 110 Storm is available in 17 calibers from .223 on up to .338 Win Mag, with all the common hunting calibers plus interesting additions like .280 Ackley Improved and 6.5×284 Norma. That means there’s something for every type of hunting. Barrels are either 22-inch or 24-inch depending on caliber. MSRP on the Storm regardless of chambering is $865 with real world prices closer to $650.

Range Time Before the Hunt

Our T&E rifle came chambered in .30-06 Spfld, which is a nice do-all caliber for everything from smaller animals to the larger Plains Game. To prepare for the hunt, we fired a mix of Norma BondStrike 180-grain, Federal Premium Edge TLR 175-grain, Hornady Precision Hunter 178-grain ELDx, and Hornady American Whitetail 150-grain. The rifle was shooting MOA at 100-yards from the bench with each of the ammunition offerings. The best three-shot, hundred-yard groups measured 0.78-inch with Federal Premium and 0.92-inch with Norma BondStrike. The best range time, however, was not here in the states, but rather, on a red-sandy makeshift range on the African Veld. No hunting takes place until hunters prove proficiency with their chosen weapons and ammunition. Though the Storm does not have the spiral fluted bolt and barrel, nor the threaded muzzle of the High Country, it nonetheless shoots and performs like a rifle twice its price. The action is smooth, and the three-position tang safety is a nice addition. 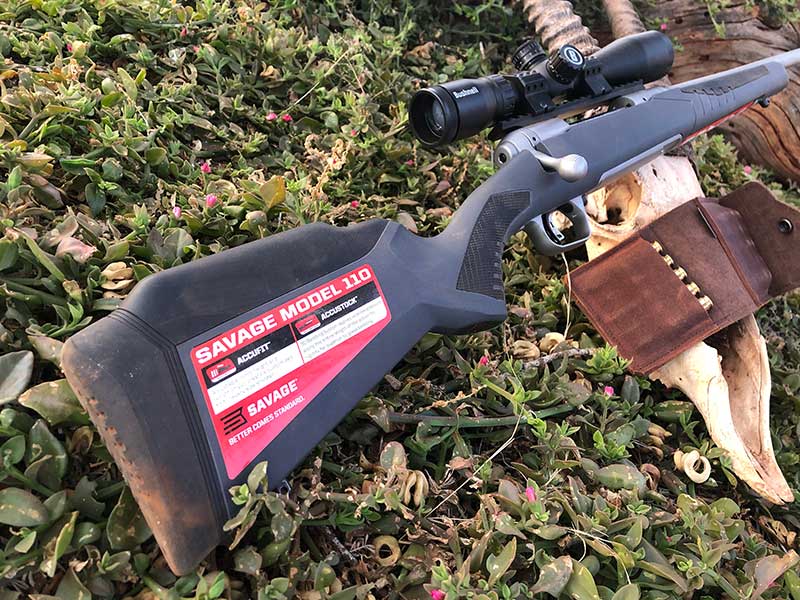 Accuracy is the name of the game for all these new Savage 110 variants, driven by the user-adjustable AccuTrigger, AccuStock, and of course, the customizable AccuFit system allowing users to swap out both comb and LOP shims for the perfect fit. (Photo: Kristin Alberts/Guns.com)

Like many of the new 110 Savage rifle variants, the Storm makes use of the AccuTrigger, AccuStock bedding system, and incredibly popular AccuFit adjustable stock. The user-adjustable AccuTrigger is a must-have with our test rifle’s trigger breaking just over 3.75-pounds on a Lyman Digital Pull Gauge, with ample adjustment room. The AccuFit stock system of interchangeable comb height risers and LOP spacers allows all shooters from youth up to adults to fit the very same rifle to themselves in a matter of minutes. The importance of such a customizable system really showed itself on our African Safari as I shared the rifle with my hunting partner Stan Pate. Swapping out both LOP and comb height spacers takes only a few moments—even in the field–and allowed us both to shoot the same rifle well and comfortably.

The true test of any rifle or gear performance comes in the field, in this case, the Northern Cape of South Africa. With both a Savage High Country and Storm, we set out after Plains Game and were blessed to harvest 16 beautiful animals between us. At 7.45-pounds empty, the Storm proved adequate for semi-mobile hunters who prefer to spot and stalk much more than hunting from the elevated “Bakkie” hunting vehicles.

Stalking got us into close range on several of the game animals, and that’s where the quiet-moving safety showed its importance. Moving silently through its three positions, this construction allowed the bolt to be opened without putting the rifle into full battery. Pate used our shared Storm rifle to take down a trophy Nyala with one shot using the Norma BondStrike ammunition, while I used the same combination on both Warthog and Springbok. That kind of reliability takes one major variable out of the equation. It’s not every day we get to test a new gun on the hunt, in this case, hunting results speak greater volumes than rounds sent down the shooting range.

GET YOUR OWN 110 STORM RIGHT HERE!

If neither the 110 Storm of the 110 High Country trip your trigger—or your budget—there are dozens of other options and configurations. Rifles like the 110 Bear Hunter, Predator, and Long Range Hunter all use different finishes, features, barrel lengths, and calibers with the same accurate end results as long as the shooter does their part. 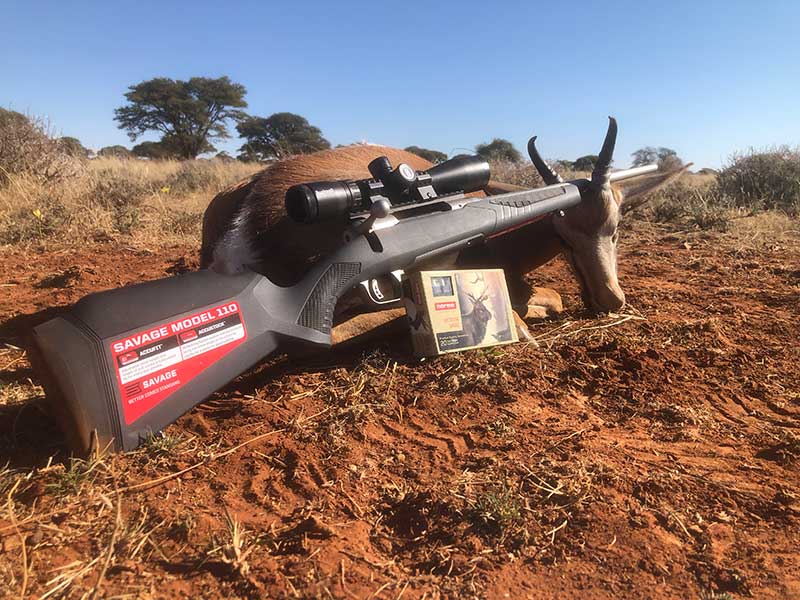 Hunting with Savage rifles, especially one like the 110 Storm, just goes to show that hunters don’t need an expensive double or a custom-built rifle for life’s grand adventures. While many hunters will appreciate the higher-end features on the High County, the sibling Storm is a do-all rifle that more than held its own in the dust, heat, and harsh conditions of Africa’s Northern Cape.