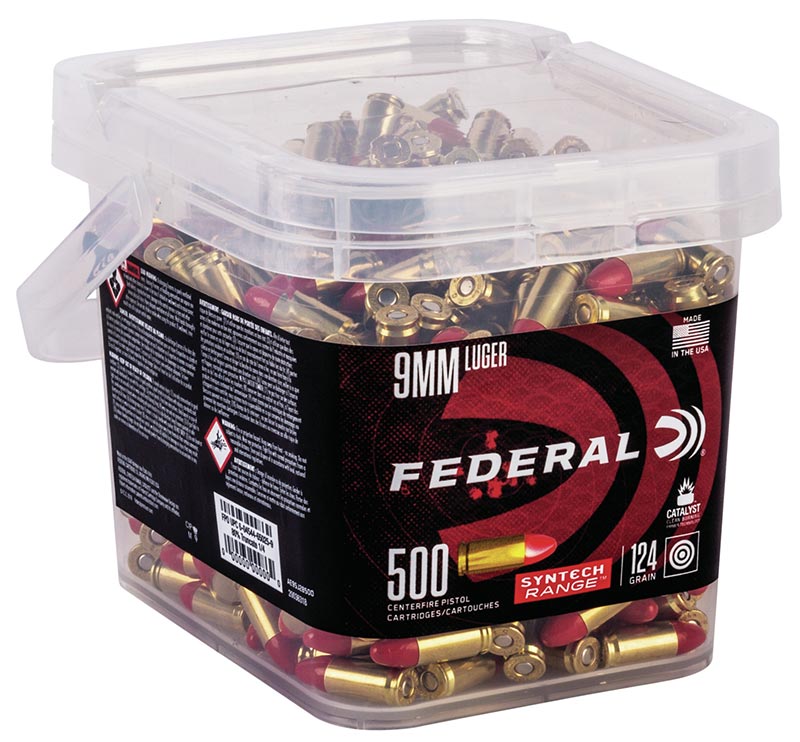 Federal’s Syntech range ammo is now available in bulk buckets, filled to the brim with 250 to 500 rounds of pure range fun.

The rugged, plastic buckets are stackable and easy to store and transport to and from the range. Sporting the company’s award-winning Syntech ammo, the buckets offer bulk ammo to those that prefer to sling a lot of lead downrange. Federal released its Syntech line in 2017, offering shooters a “one-of-a-kind” TSJ projectile” utilizing a polymer jacket. This construction reduces fouling as well as helping to prevent barrel damage due to heat and friction.

“Conventional ammunition causes metal-on-metal contact between the bullet and bore, which can shorten barrel life and rob accuracy. The polymer-encapsulated Syntech bullet prevents this while eliminating copper and lead fouling,” Federal Handgun Ammunition Product Manager Chris Laack said in a news release. “Combined with specialized clean-burning powders, your gun will stay cleaner, longer, so you can shoot more and shoot better. The exclusive Catalyst primer provides the cleanest most consistent ignition possible. That’s why it received the 2017 NRA Golden Bullseye Award. And now, we sell it by the bucket full.” Federal Syntech ammo’s Total Synthetic Jacket (TSJ) is billed as eliminating copper and lead fouling as well as reducing damaging heat and friction. We tested a case of it previously on a Glock 19X with no issues. (Photo: Chris Eger/Guns.com)

Not ready to commit to 500 rounds just yet? Take Syntech for a ride with a 20-round box from Guns.com.