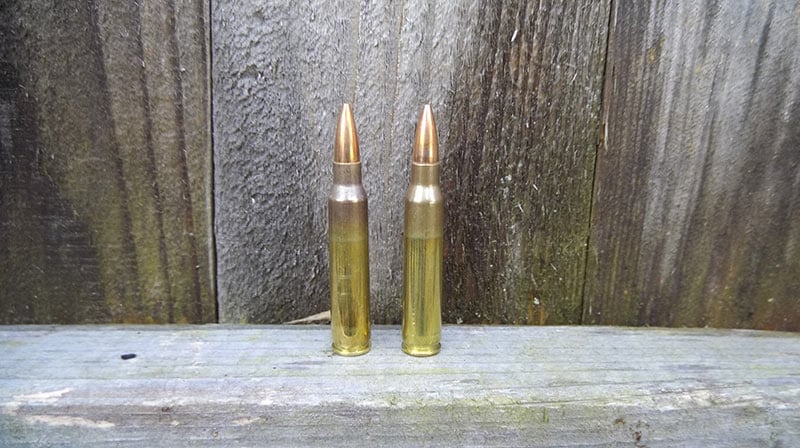 In the world of rifles, the .223 Remington and 5.56 NATO reign supreme. Of the options out there for .223/5.56 chambered rifles, the most esteemed for medium to long-range shooting is the 77-grain variant.

We are going to explore two of these 77-grain loads, one with a distinctive military pedigree and the other a commercial target option. Today, the Black Hills 77-grain OTM MK262 goes head to head with the Sig Sauer 77-grain Elite Match OTM. 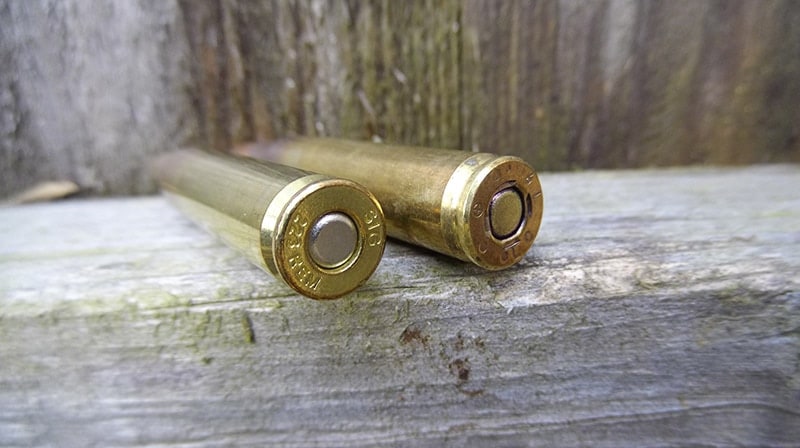 Black Hills and Sig are both involved in supplying the military with top-of-the-line equipment. Sig has the distinction of producing the U.S. military’s M17 pistols as well as optics for combat while Black Hills has provided many military groups over the years with the military equivalent of the ammunition tested in this article.

The MK 262 loads have earned a reputation for serious performance in the harshest combat scenarios. While the full history of this incredible ammunition can’t be told here, it is a big reason why the military decided to stick with the 5.56 NATO cartridge. 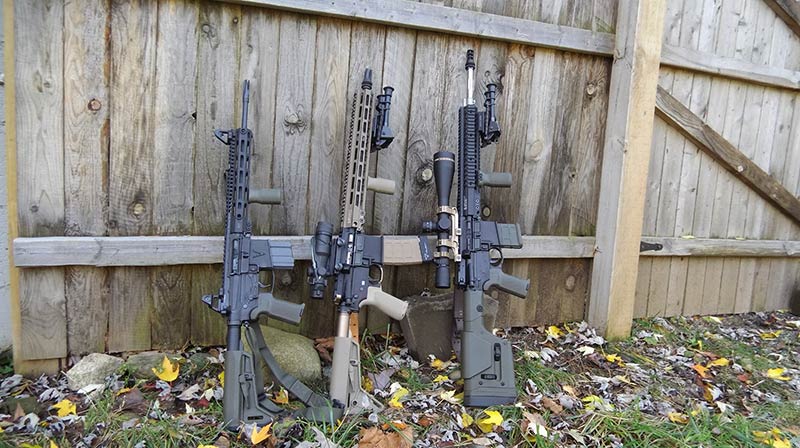 For the general accuracy portion of this test, the author utilized several AR-15 rifles. Using a variety of gun types and optics allows for a clear picture of the possible performance of these two loads.

All the rifles and their components were built from off-the-shelf products. The test rifles included four different barrel lengths: 14.5-, 16-, 18- and 20-inches, each featuring iron sights, a TA31 ACOG, a Sightron 6-24x50mm scope and a Sig TANGO6T 1-6x scope, respectively. The on-paper accuracy was recorded at a distance of 100-yards. Five, five-shot groups were fired with each load in each rifle. 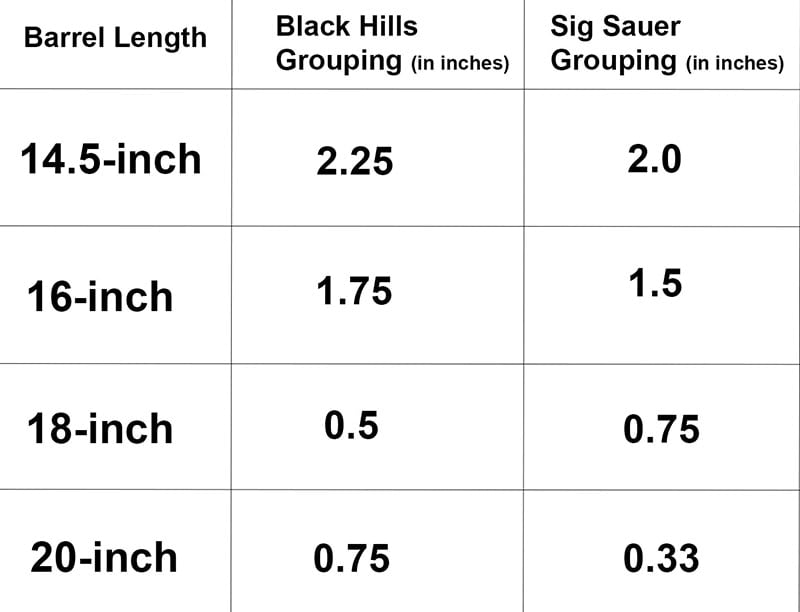 The 14.5-inch and 16-inch barrels are lightweight contour and the accuracy was excellent considering how quickly those barrels warm up. The 18- and 20-inch barrels were both heavy profile match barrels. Overall, these two loads performed very similarly on paper, with a slight accuracy edge going to Sig.

The accuracy of these two loads was, while similar, edged toward Sig due to a tighter set of averages. The Black Hills load shot many groups that were much smaller than its competitor but ended up with a slightly higher average. The author believes that this is because the higher pressure and greater heat generated by the Black Hills ammunition contributed to some deviation. 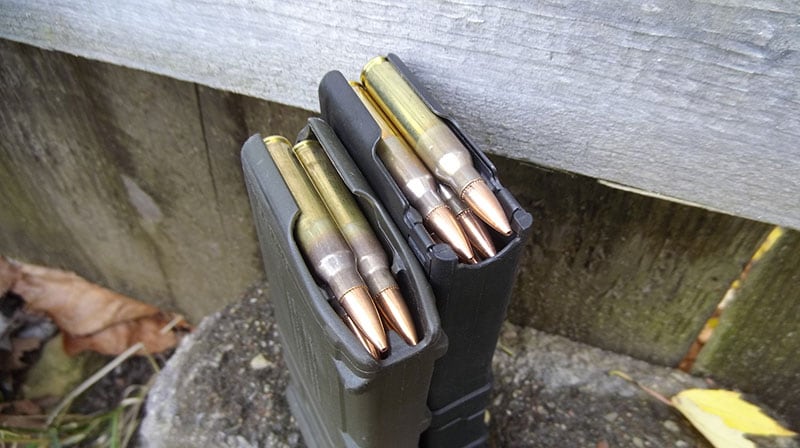 When it came down to field performance, Black Hills won handily. The rifles and ammunition were tested for accuracy out to a distance of 400-yards on steel and silhouette targets. The Sig ammunition had a difficult time keeping up with the Black Hills at all distances past 200-yards. Groups began to open up due to the influence of wind on the Sig ammo.

The ammo was tested in simulated combat shooting and hunting situations for game like coyotes. While not all of the guns performed identically, a clear edge began to appear between the two when unknown distances were considered.

The field performance success generated by the Black Hills load comes in no uncertain terms from its velocity. Velocity was measured over an Oehler 35P chronograph 10-feet from the muzzle. Each of the four barrel lengths was tested for an average of 10 shots. 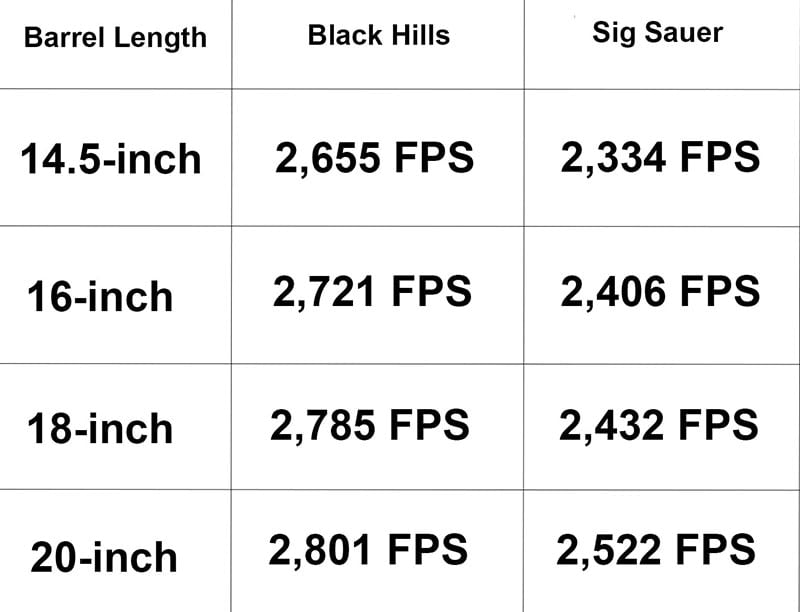 This disparity in velocity is the primary reason why the Black Hills load did so well during field testing. Hits were much easier to make, and the wind had very little influence on where the bullets went. While the slower Sig ammo did better on paper and in terms of standard deviation and velocity runout, the outdoor environment proved to be too unpredictable for it.

It should be noted that Black Hills ammo had a greater standard deviation in terms of velocity between rounds, but this had very little impact on real-world performance. The Sig ammo showed incredible round to round consistency, with velocity variances as low as 5-FPS but, unfortunately, the wind cares very little about that and gravity cares even less.

When it comes to recoil, there was very little difference in terms of how it felt on the shoulder in an AR-15 rifle. The AR design soaks up most of the recoil, to begin with, and neither of these rounds had a noticeable amount of kick. Black Hills wins this round because, while the recoil is pretty much the same, Black Hills manages to throw the bullets substantially faster. 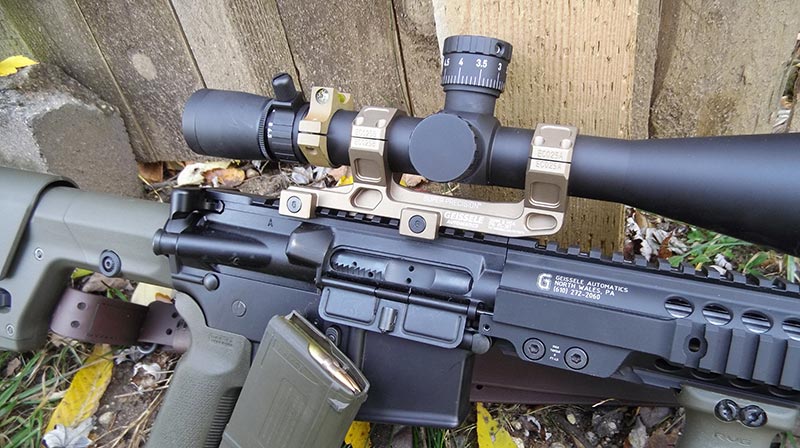 While the 18-inch and 20-inch guns are tested at longer distances, the 14.5- and 16-inch rifles were fired at close distance for speed to see how the guns did in close quarter scenarios and in competitions like 3-Gun.

The Sig ammo did exceptionally well here. This should come as no surprise, as some of the company’s competitive shooters use this for speed matches at close distance. The recoil impulse might be similar, but the cycling of the action, likely due to lower pressure, is smoother with the Sig ammo.

The Black Hills ammo is no slouch, but the way it feeds is much more robust. The cases fly about three times the distance as those from Sig. There is also more blast at the muzzle with the Black Hills load.

It became clear to the author that the Black Hills load was, for all intents and purposes, a superior general use cartridge. When it came to use in the field against unknown distance targets and targets at longer ranges, it was just better all around.

The Sig 77-grain OTM is much better suited for close range competition where wind and drop are not factors. The author, however, would not recommend Sig ammunition for competition at distance, such as Precision Rifle or other practical rifle matches. For 3-Gun and other such close-range matches, it would work just fine.

While both of these rounds are advertised as open to match because of the bullet type, they have an entirely different theory of end-use and a potentially different customer base. While declaring the Black Hills load as the winner may seem a little bit unfair considering this separation in and use, it can do everything that the Sig load does but with more sauce.

Be sure to check out the full array of rifle ammunition over at Guns.com.