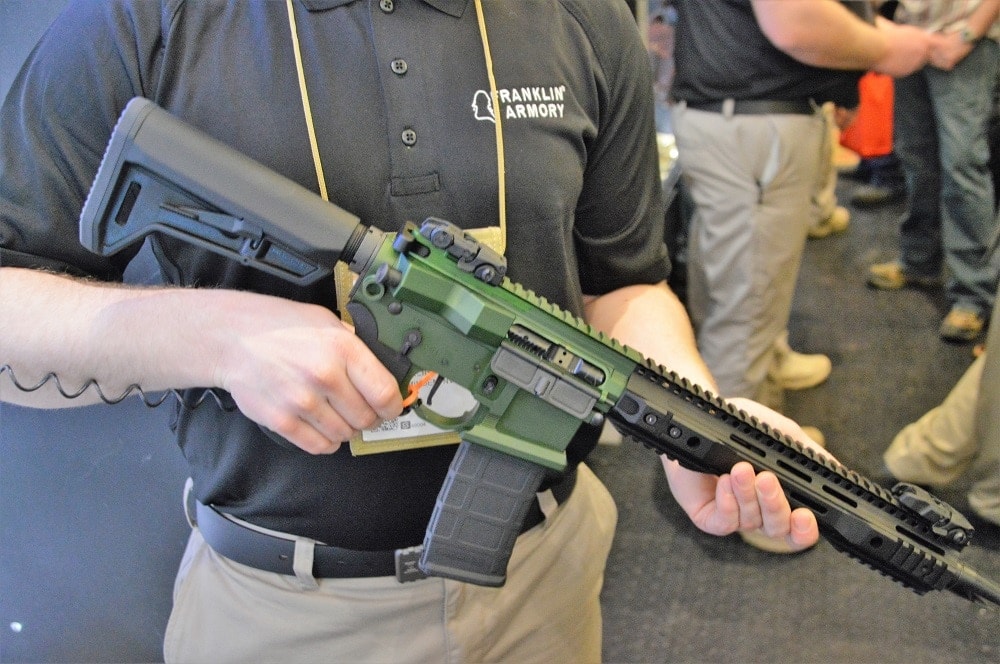 While approved in 2017 as a non-NFA item, the ATF this week has reversed course on transfers of the Franklin Armory Reformation, now classifying the firearm as a “Gun Control Act Short-Barreled Shotgun” (Photo: Chris Eger/Guns.com)

In early 2018, Franklin Armory unveiled an 11.5-inch barreled non-NFA firearm, with a stock. The ATF this week decided that other regulations applied.

The AR-15 based FA Reformation as introduced included an 11.5-inch barrel with a muzzle device and a Magpul MOE SL carbine stock but at the time did not require a tax stamp as it was technically neither rifle nor shotgun.

The firearm used a barrel with straight cut lands and grooves and a standard chamber. The resulting firearm cycled rifle ammunition but did not impart spin on the bullet during firing as it had no traditional rifling.

However, in an open letter posted this week, the ATF reversed course and, while they agreed that it was not a rifle, they pointed out that it was not chambered for shotgun shells. Then, the agency went to the yardstick and determined that “if a Reformation firearm is equipped with a barrel that is less than 18-inches in overall length, that firearm is classified to be a short-barreled shotgun (SBS).”

This leads to the curious logic that the Reformation is a “Gun Control Act Short-Barreled Shotgun,” or GCA/SBS, the first time such a determination has been issued. Worse, since it is in uncharted territory, the federal regulators do not have a way to oversee the transfer of such guns.

“Therefore, until ATF is able to promulgate a procedure for processing and approving such requests, the possessor or owner of a GCA/SBS, such as the Reformation, may not lawfully transport the firearm across state lines,” says the agency.

As for Franklin Armory, the California-based company noted on their social media that they are aware of the recent change in the Reformation’s line of firearms. “Our attorneys are evaluating this action currently. We will have a response shortly,” noted Franklin Armory.

Updated from the original to reflect that the current GCA/SBS designation as applied to the Reformation still makes the firearm a non-NFA item.