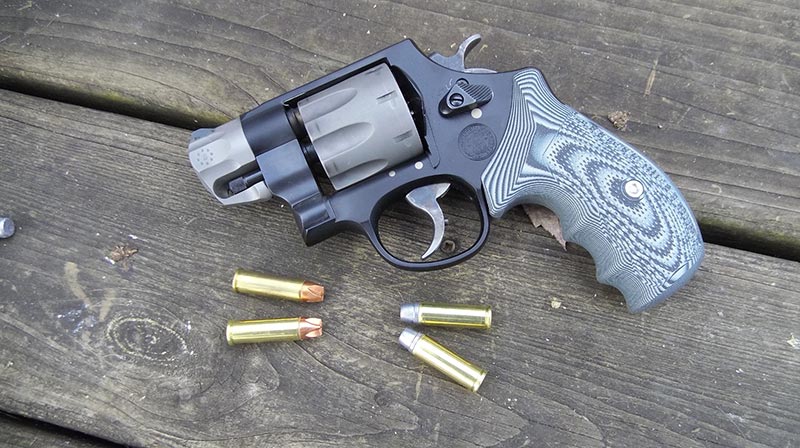 The Smith & Wesson Model 327 served as the test gun for this review. (Photo: Josh Wayner/Guns.com)

The .38 Special is one of the most common revolver cartridges available today. When most people think of a snub-nose pocket revolver, they think of a good ole .38. The most common in widespread use today are in the 2-inch range as far as barrel length goes. Most people carrying a .38 SPL these days don’t do so with a 4-inch or 6-inch barrel.

A major complaint about the short barrels is that they don’t offer great penetration or velocity. While this may ring true for some types of ammo, it does not for all of them. Today we are going to be taking a look at two types of .38 designed for close ranges — the Black Hills HoneyBadger 100-grain +P and the Buffalo Bore 158-grain Outdoorsman Hardcast +P.

The Black Hills load features a very modern solid copper bullet with an X shaped tip profile. It is part of the company’s “HoneyBadger” line. It maintains effectiveness through tissue displacement, functioning like both a JHP in terms of tissue damage and an FMJ in penetration.

Buffalo Bore’s deep-diving load here is meant for the woods and is a traditional Keith profile meaning it blasts right through tissue and bone while driving as deep as possible. The company has an extended line of products in the Outdoorsman line. 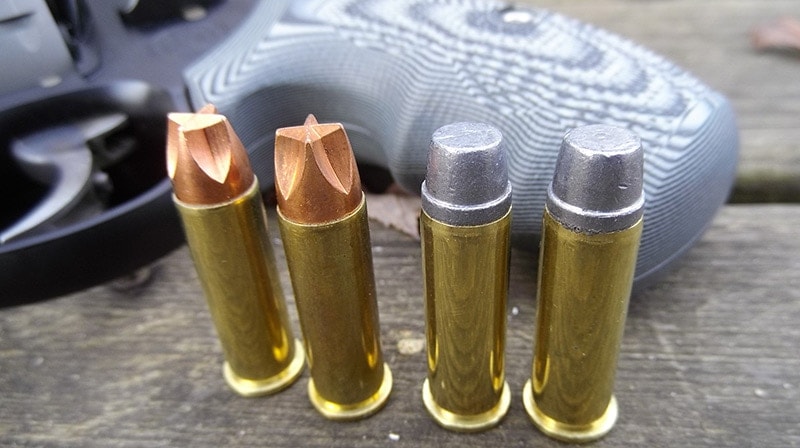 The Model 327 is a very accurate revolver despite its essentially non-adjustable sights. The author’s gun shoots point of aim at 25-yards with most ammunition. Even though it is quite accurate, accuracy testing was conducted at 15-yards from a bench rest. Five, five-shot groups of each type of ammo were tested.

The accuracy portion here came out as a tie. Both loads surprised the author and produced identical average group sizes. What’s more, is that the accuracy generated was quite good. Both loads averaged 1.75-inches at 15-yards.

Velocity also came in remarkably close. Due to the limited barrel length that we were working with, just 2-inches, the author expected there to be a much greater deviation. Velocity was tested over an Oehler 35P chronograph at a distance of 5-feet from the muzzle for the average of 10 shots.

The Black Hills load generated 1,109 feet-per-second. This is quite fast considering that the load is rated at 1,200 ft./s, which we could assume is the expected velocity for a much longer barrel.
The Buffalo Bore load impressed with a muzzle velocity of 1,025 ft./s. This is a very powerful .38 load rivaling many .357 Magnum offerings. As such, the author felt that this was as good of a tie as there could be between two bullets of such wildly different designs. 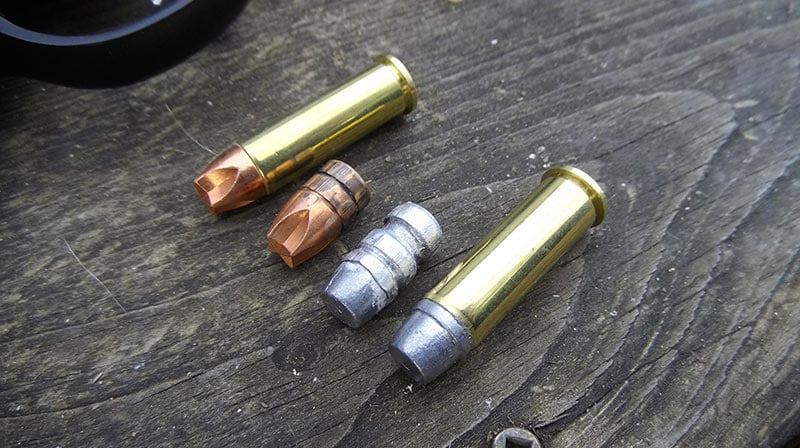 Competition between Black Hills, left, and Buffalo Bore was fierce with both designs working as intended. (Photo: Josh Wayner/Guns.com)

In the recoil department, Black Hills offers a clear advantage from shot to shot. The lightweight, solid bullets offered low felt recoil which, of course, would help reduce training time. Felt recoil in the hand was less than almost any other .38 special load the author regularly tests.

The Buffalo Bore load was much more traditional in terms of handgun recoil. There was a noticeably greater amount of muzzle rise from shot to shot. That said, it was not difficult to manage in a gun the size of the S&W 327. It was not at all unpleasant to fire and would be a clear choice for backpackers and those looking for defense against animals.

Due to the fact the S&W 327 is an eight-shot revolver, it has the same onboard capacity as a gun like a 1911. When loaded with .357 Mag, it is a serious handful and is generally unpleasant. The gun has an alloy frame and titanium cylinder, which make it light enough to carry all day, but hard on the hand in terms of recoil. The gun featured in this article is fitted with an excellent set of VZ grips which are not only an aesthetic upgrade but a very functional one for carry.

Follow-up shots were fast and accurate with the Black Hills ammunition. The low muzzle rise and low recoil made it an excellent round in this capacity. Shooting one-handed at close range to simulate self-defense also displayed a bias towards this ammunition.

Buffalo Bore was not far behind, but it did offer slower follow-up shots and greater muzzle rise between shots. If this ammunition was used in a smaller gun, recoil may be uncomfortable but bearable. Overall, the Black Hills offering was superior in terms of general handling characteristics- but with one small exception. The sharper points do not lend themselves to quicker loading with the full moon clips that came with the model 327. This is a minor complaint, but it should be noted. 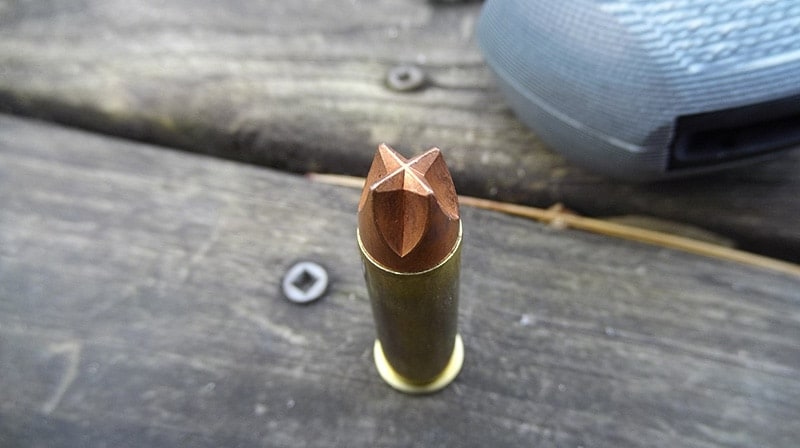 Gel performance is one of those things that is hard to fully categorize due to the number of technical variances present in many bullets. When looking at these two loads, they do fill different purposes but occupy a similar degree of end-use. Many people would prefer the merits of either of these.

The main difference between them is the Buffalo Bore load is meant to drive deep and straight without a tremendous amount of tissue damage. Gel penetration was quite impressive. The three-shot average was a staggering 35-inches in bare Clear Ballistics gel! It passed completely through two blocks and stopped in the third one. This performance is incredible considering the short barrel length and modest muzzle velocity. It did not offer a single degree of expansion and the wound channel was quite narrow.

Both of these ammunition types offer significant advantages. The concealed carrier of a small .38 SPL would be well suited with either of these. 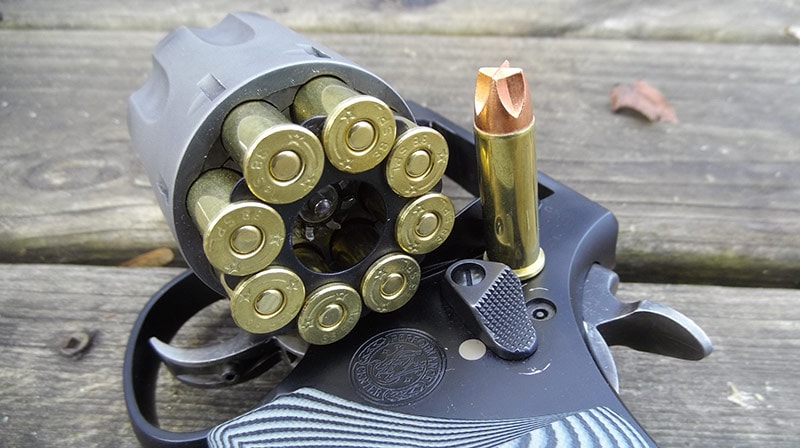 The technical victory here belongs to Black Hills as far as handling and recoil, but for all intents and purposes, this head-to-head ended in a tie. The fact was these loads did more to complement each other than compete. They both offer a small .38 much-needed penetration power, but with no type of mechanical expansion.

Ready to grab some .38 SPL? Check out our extensive inventory of handgun ammunition on Guns.com.