Top 10 Most Drool-Worthy Used Guns In Our Vault

Here are the most drool-worthy used guns currently in the Guns.com vault available for you to snap up right now! In no particular order… 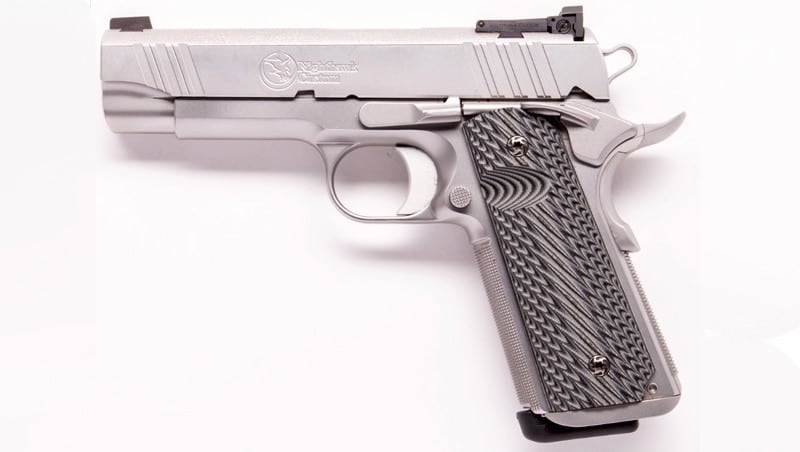 A competition-grade 12-gauge shotgun designed with the aid of Olympians, the Krieghoff K-80 Trap Special Combo is a proven winner. The Krieghoff family is in its fifth-generation of providing unparalleled quality to world champions. This handsome fine-tuned weapon comes with eight choke tubes and tools for adjustment, ensuring it is set up just right for the aspiring gold medalist. A felt-lined aluminum hard case with a combination lock is included to protect what is essentially a functional piece of art.

A very scarce WW2 Saginaw manufacture U.S. M1 Carbine. Manufacture date shows 9-43, with a barrel date of 9-43. It comes with a WWII-era M1 sling. All matching, even the trigger group. Features include an 18-inch 4-groove barrel with an excellent Saginaw 15-round magazine. Stock is excellent condition with AA (82nd Airborne) cartouche and checkered butt plate. This rifle is a must-have for any WWII or vintage collector. 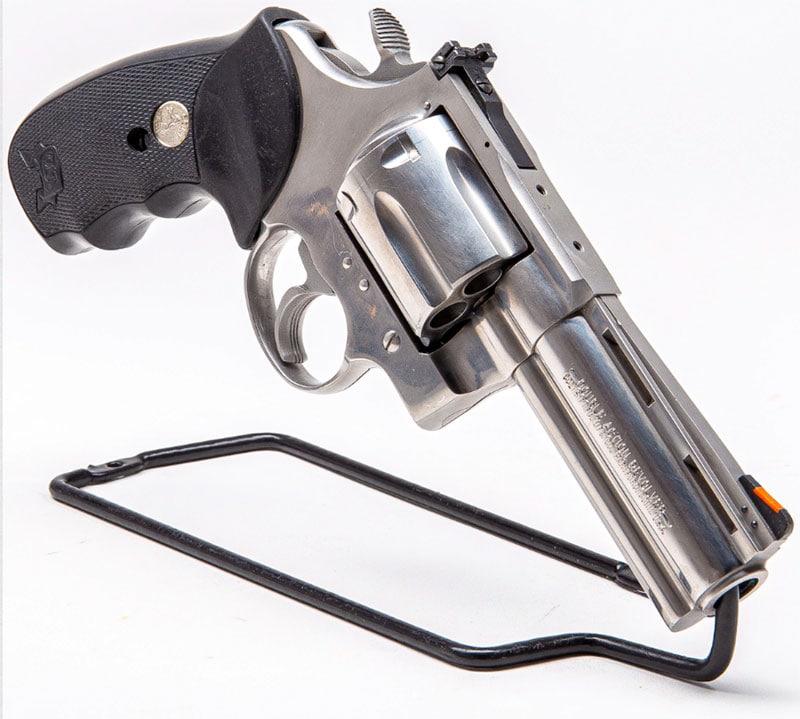 This 4-inch barreled Colt Anaconda chambered in .44 magnum can be accurately described as a concealable hand cannon. The Colt Anaconda was introduced in 1990. It’s a large frame double-action revolver featuring a full-length under-barrel ejection-rod lug and six-round cylinder. Colt stopped making them in 2003.

The Larry Bird Commemorative Winchester Model 94 is a tribute to the great basketball player. There were only 100 made, and this is number 78. This lever-action rifle is chambered in 38-55 Winchester, sports a 24-inch barrel and holds six rounds in the tube. It comes with a wooden case with a burgundy velour fitted interior and a matching bowie knife.

The Knights Armament Mark 11 Mod 0 is currently issued to US Army snipers as the M110 Semi-Automatic Sniper System. It is a modified version of the SR-25 rifle. The Knight’s Armament SR-25, (Stoner Rifle-25) is a 7.62×51mm NATO chambered semi-automatic rifle. It was designed by Eugene Stoner and manufactured by Knight’s Armament. It entered production in 1990 and is still in production. The rifle uses a rotating bolt and a direct impingement gas system and features a heavy 20-inch free-floating barrel. 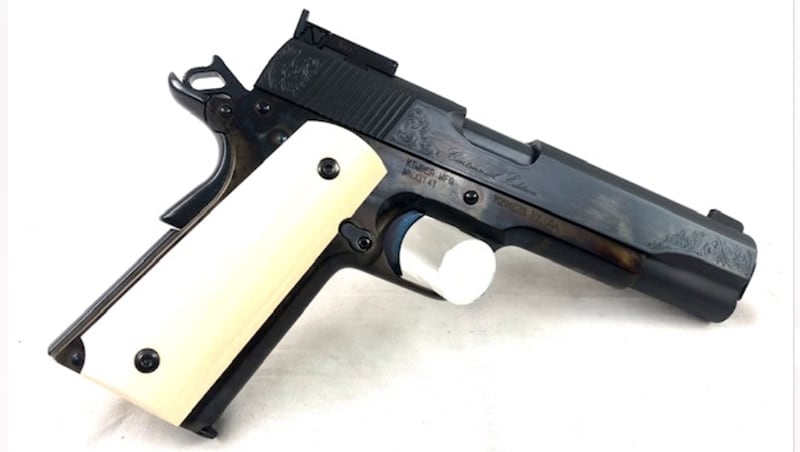 To celebrate the 100th birthday of the 1911 design, Kimber made the Centennial Edition. Only 250 were produced. This one is number 141. Chambered in .45 ACP, it features a five-inch barrel and has a seven-round magazine capacity. It comes with a beautiful Centennial display case.

The Steyr AUG A3 M1 is an Austrian .223 Rem/5.56 NATO chambered bullpup semi-automatic rifle. It was released in 1973 and is still used by military and law-enforcement agencies around the world. Users can use the included scope or remove it and attach an optic of their choice. The barrel is 16-inches long but the bullpup design makes it very compact. 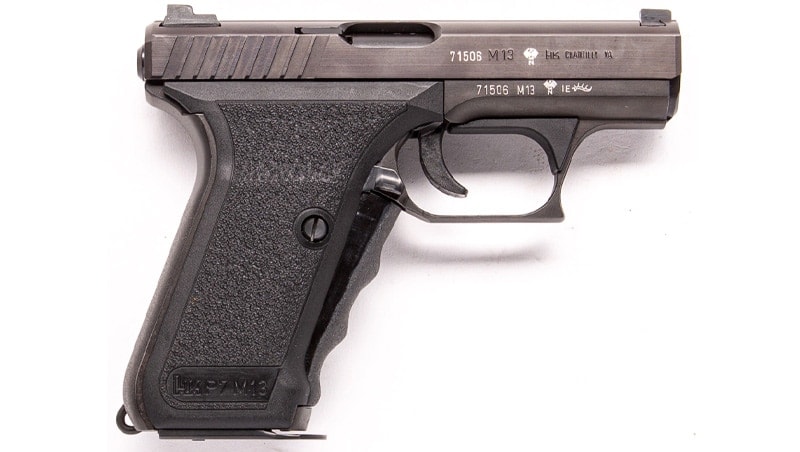 The Heckler & Koch P7 M13 is a German 9×19mm semi-automatic pistol. It was produced from 1979 until 2008. It has attained an almost cult-like following due to its rarity and high collectability factor. Many people think it should be the James Bond/007 gun, instead of the Walther PPK. This one is in excellent condition and comes with the original box and three 13-round magazines. 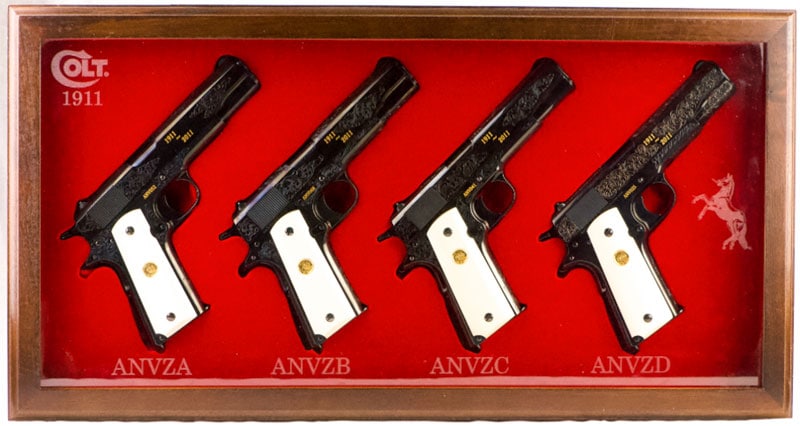 A 2012 Limited Production Colt 1911 Government Anniversary 4 Gun Set. These handguns commemorate the 100th anniversary of the Colt Model 1911. These particular pieces show a high luster blued finish with intricate scrollwork done on both the receivers and the slides. The amount of engraving increases from the first gun to the last. These ponies are accented with pearl grip panels that contain the 100th anniversary Colt emblem within them. This commemorative package ships in its matching limited edition glass walnut showcase.