Though we haven’t even hit the booths of SHOT Show yet — the firearm industry’s major trade show — there are plenty of announcements rolling in ahead of the Jan. 21 through Jan. 24 show. As always, there are plenty of hunting inspired guns to get pumped about, so with that in mind, here are three scatterguns we’re excited to hunt within the new decade.

The Renegauge’s self-regulating dual valve gas system allows the gun to cycle both light and heavy loads, from the lightest target loads up to the magnum threes, limited only by the three-inch chamber. A one-piece bolt carrier assembly includes the bolt, pusher sleeve and carrier. Drawing from the incredibly successful AccuFit stock systems on 110 rifles, Savage modifies the design to include three interchangeable gel-feel recoil pads for customizing both LOP and comb height.

The initial launch is all 12-gauge synthetic with a pair of Field models in black synthetic, featuring either 26- or 28-inch barrels. The rest of the lineup comes covered in some variation of Mossy Oak camouflage. There’s a pair of Turkey takers, both with 24-inch barrels, one Bottomland and the other Obsession. Lastly, the pair of Waterfowl variants, both dressed in Shadow Grass Blades, come with either 26- or 28-inch barrels.

Regardless of appearance, each comes with three Beretta/Benelli-style choke tubes and will initially retail from $1,449 to $1,549. 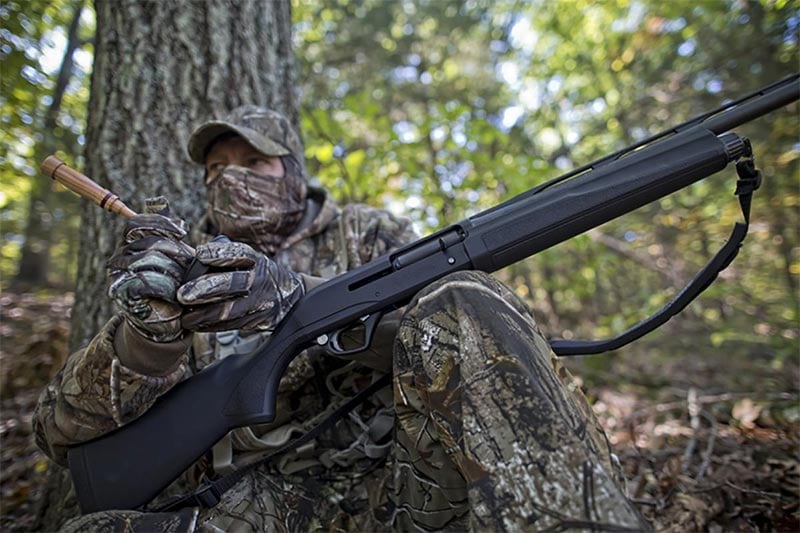 The Remington VersaMax Sportsman is an anticipated release. (Photo: Remington)

Remington’s VersaMax line of semi-automatic shotguns has been busting clays and birds since its introduction 10 years ago in 2010. Flash forward to 2020 and now big green is offering more options in their more affordable Sportsman version of the VersaMax.

The Sportsman still retains the same self-regulating VersaPort gas port system, which allows it to cycle everything from the lightest 2-3/4-inch loads on up to the heaviest 3-1/2-inch magnum shells. Some sacrifices were made with the newer VersaMax Sportsman, namely fewer chokes, no overmolded grips and also the lack of the nickel Teflon coating on inner workings. In addition to earlier offerings in black synthetic, Remington will now be offering additional camouflaged iterations for 2020, which include 26-inch barreled hunters in both Mossy Oak Bottomland and Realtree Edge.

Like all Versa Max’s before, the new Sportsmans are made in the USA. MSRP on the full Versa Max Sportsman line runs from $1,042 to $1,246 depending on finish.

CZ’s new All-Terrain shotgun announcement is one of the most inclusive of the year with Over/Unders, Side by Sides, and semi-autos debuting in 2020. Each offers features that practical hunters will appreciate. The OD Green Cerakoted receivers and barrels are mated with upgraded Walnut stocks for a unique and workmanlike appearance.

The most innovative feature on the All-Terrain is the inclusion of a set of rare earth magnets installed in the gun’s extractors or ejectors. The company says that these magnets help retain shells even when the gun is upside down. “This makes loading them easy in a pit blind or boat, and never will a dog-handler accidentally dump shells out of their gun while bending over to work with their dog,” CZ said in a press release.

The guns are equipped with sling swivels and each ship with five extended chokes. There will be 11 models in the All-Terrain series, dressed on existing Bobwhite, Upland Ultralight, Redhead Premier, Drake and 1012 lines of shotguns, in both 12- and 20-gauge. MSRP will range depending on the base model of the gun itself, from $690 to $1,123.