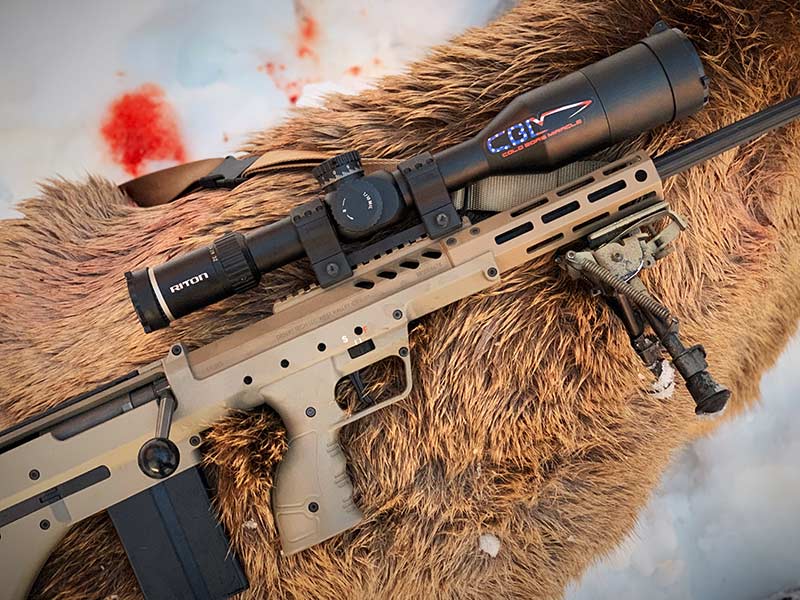 My first encounter with Riton Optics came a year or so ago when I put the RT-S MOD 5 6-24X50 scope on one of a Tikka rifle. I wasn’t sure what to expect as Riton was relatively new to me, but in a short time, the scope’s performance earned my praise. That same scope has been hauled all over the Rocky Mountains atop my rifle. It’s suffered tumbles, snow, rain and has even been used as a crutch but it still maintains a perfect zero. It’s no stranger to distance work, taking five mule deer and two cow elk from 200  to 1,100- yards the past two seasons.

My positive experience with the Mod 5 left me wanting to try my hand at its sibling, the Mod 7, to see how it stacked up. At a slightly higher price, the RT-S Mod 7 4-32X56, looked like a promising addition to my hunting arsenal; but can it compete with the more affordable Mod 5?

The Mod 7 is a step up in both price and performance from the Mod 5, at more than twice the price, the Mod 7 delivers quite a few more features to the optics aficionado.

Both scopes are front focal plane, which means the reticle is magnified with the power adjustment. This feature allows shooters to use the reticle for accurate holdovers and corrections regardless of the magnification setting. The 8X zoom of the Mod 7 grants a substantial power range from 4X up to 32X; but, like many scopes, I found the very top end of the magnification to be too dark and aberrated for field use. For shooting paper targets up close though, it did just fine. 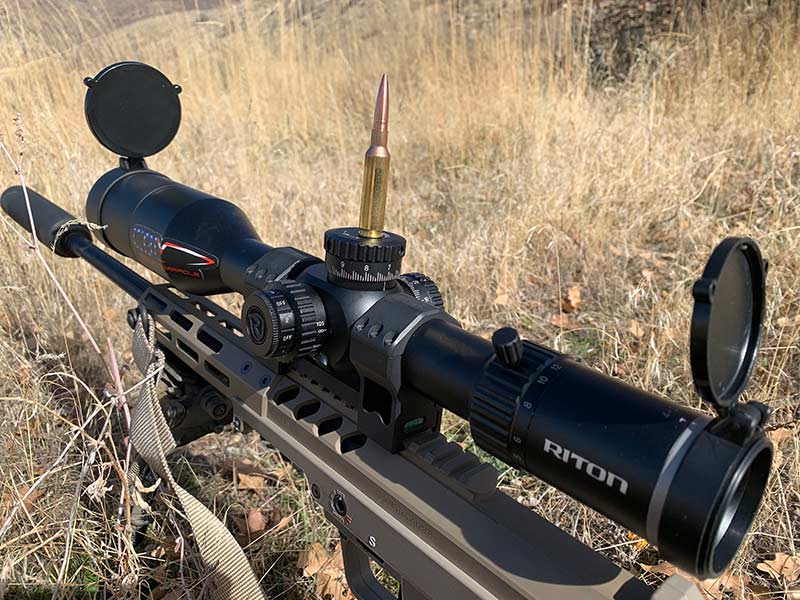 The PSR reticle featured in the Mod 7 was also a significant step up from the Mod 5 and a bit busier than some. It is a “Christmas Tree” style reticle, with a broadening grid of wind and drop values. Subtensions are clearly marked on the evens so you can keep track of your hold. Additionally, the marks are thin so as not to bother the view of potential targets. A hollow center and .2 MRAD hash marks come in handy when doing long-range work while illumination rheostat allows shooters to adjust reticle illumination to fit their surroundings. Speaking of MRAD, the Mod 5 only comes in the MOA option, so it’s to the Mod 7’s benefit to deliver more options to consumers.

The Mod 7 features a 34mm tube and, this again, is a boost in design over the Mod 5’s 30mm tube. The bigger tube allows for more internal travel, giving the Mod 7 a total of 30 MRAD of elevation adjustment. That’s more than enough for your average long-range shooter.

Another feature I appreciated on the Mod 7 was the integrated throw lever on the magnification ring. This “cattail” gives shooters more purchase when trying to adjust the power ring. It’s not a big deal, but definitely a  nice touch.

The Mod 7 opts for a zero stop in the elevation turret, another feature missing on the Mod 5. This is handy as you can return your elevation turret to zero without looking at it. This saves shooters from missing shots due to a rotation or more off.

While Riton packs its scopes with loads of great features, it’s not quite perfect. Namely, the scope, like its Mod 5 sibling, doesn’t offer graduation marks on the turret housing. This prevents shooters from being able to see which rotation they are on. With the Mod 7, there are only two turns so it’s less problematic; but with the Mod 5 providing more turns it makes it harder to keep track of. 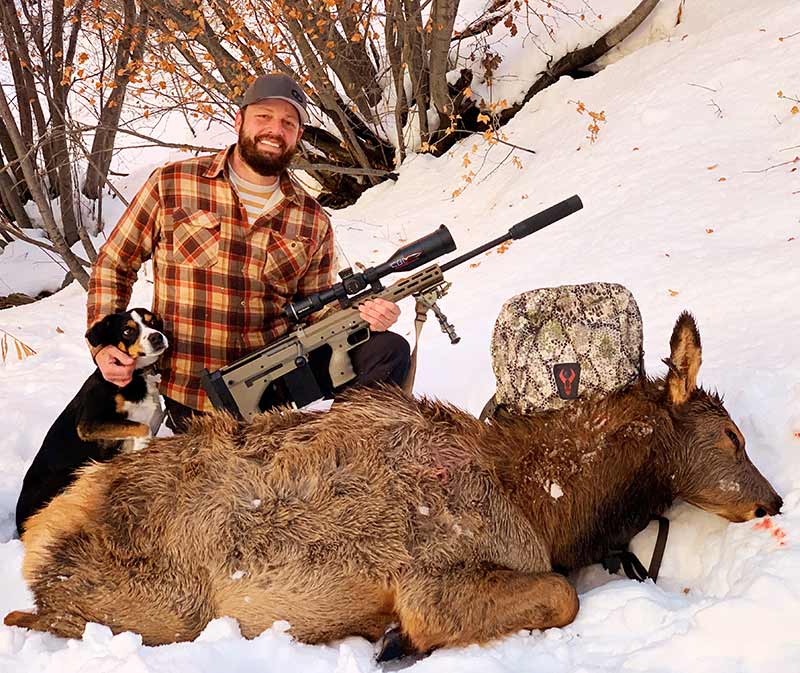 The author after using the Riton on a hunt. (Photo: Jeff Wood)

I mounted the Mod 7 on my Desert Tech SRS A2 rifle, which seemed like a good fit for the scope. With the new hunting weight 6.5 Creedmoor barrel in the rifle, I figured it would make a good companion for this year’s elk hunts.

Before heading into the field, I took the rifle to the range to grab a solid zero and familiarize myself with the Mod 7’s functions. My first impression was that eye relief seemed just a bit touchy. Not so much as to be a problem, just more so than I was used to. I quickly zeroed the rifle and adjusted the zero stop, per the instructions — easy enough and functional. I then took the rifle up into the mountains to do testing at further ranges. I was happy with the optical clarity of the Mod 7, even when looking at animals and trees at a mile or more away. It was a very clean and bright image. The glass clarity of the Mod 7 is a great improvement over the Mod 5, as it should be at this price point.

As I mentioned earlier, the quality does degrade some at the very upper end of the scope’s magnification. This is a phenomenon I have noticed on almost all riflescopes, but it is significantly less of an issue as the price tag goes up. On the Mod 7, it didn’t bother me much since I rarely use a scope at its maximum power setting.

The turrets on the Mod 5 have a push-pull locking system, whereas the Mod 7 does not. Honestly, I am torn a bit as to which I prefer. Sometimes I like having my turrets locked to avoid involuntary elevation changes and other times I like the freedom of turning the turret without having to unlock it. For hunting, the locking system seems to work best; but for range or competition use, I would forgo it. As it turned out, I really enjoyed the throw lever on the magnification ring. To be honest, I couldn’t describe the tension on the magnification ring, because with the throw lever it doesn’t even register.

It didn’t take long for me to gain proficiency with the Riton Mod 7, so when the time came to put this rifle into action, I was quite comfortable. The late-season elk hunt had arrived, and I took my Riton topped SRS up into the snow-covered mountains. The first shot I took was 475-yards away from a young cow.

I dialed the 2.0 MIL on the Mod 7’s elevation turret and pressed the trigger. The cold and clean mountain air was visibly disturbed by my shot. I watched the trace cut through the bright image before me as I followed the shot in. I watched the cow drop, kick and slide down the snowy slope. 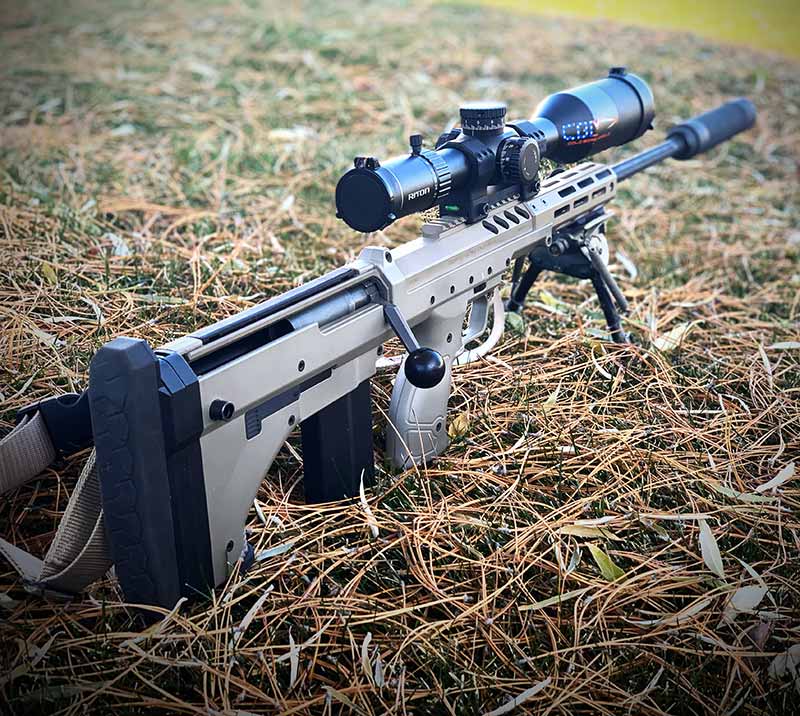 The Riton makes for a solid choice for hunters. (Photo: Jeff Wood)

The Riton Mod 7 turned out to be a strong, clear, accurate and repeatable riflescope and I look forward to using it more in the future. Both the Mod 5 and Mod 7 give a good performance for their price point and one could argue they punch above their weight. Either one would be a good choice depending on your needs and application.