Happy President's Day: Let's Take a Peek at Their Guns

With 45 Presidents since 1789, many had a solid interest in fine firearms and often maintained and used extensive collections. Here are some of the more interesting ones we have found.

It should be noted that at least 29 Presidents served in the military including four of the first five. Speaking of which, the Father of the Country, George Washington, served not only as a colonel in the Virginia militia but of course also led the Continental Army and, while in office, commanded troops yet again during the Whisky Rebellion. His collection included at least seven sets of pistols recovered from Mount Veron after his death as well as numerous rifles. 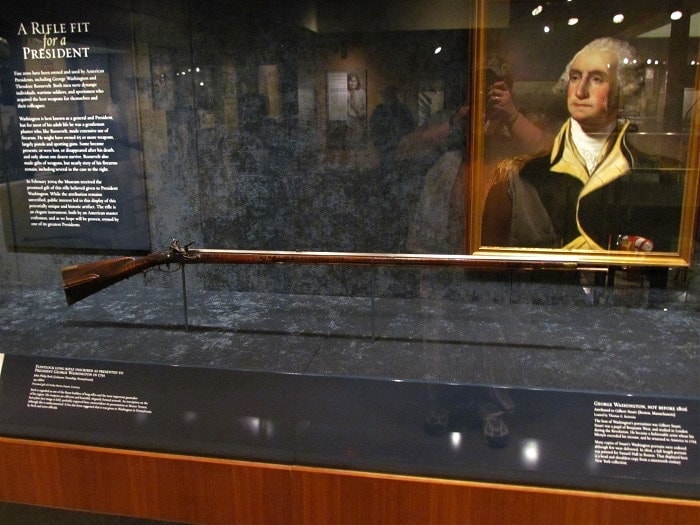 Pennsylvania gunsmith John Philip Buck presented this flintlock long rifle to President George Washington in 1791. The .44-caliber rifle was similar to those used by elite light infantry units under Washington’s command during the Revolutionary War such as Morgan’s Riflemen. It is now in the Frazier in Louisville (Photo: Chris Eger/Guns.com)

As noted by Monticello, Founding Father and primary author of the Declaration of Independence, Thomas Jefferson wrote to his 15-year-old nephew, Peter Carr, concerning what he considered the best form of exercise:

“… I advise the gun. While this gives a moderate exercise to the body, it gives boldness, enterprize, and independance to the mind. Games played with the ball and others of that nature, are too violent for the body and stamp no character on the mind. Let your gun, therefore, be the constant companion of your walks.” 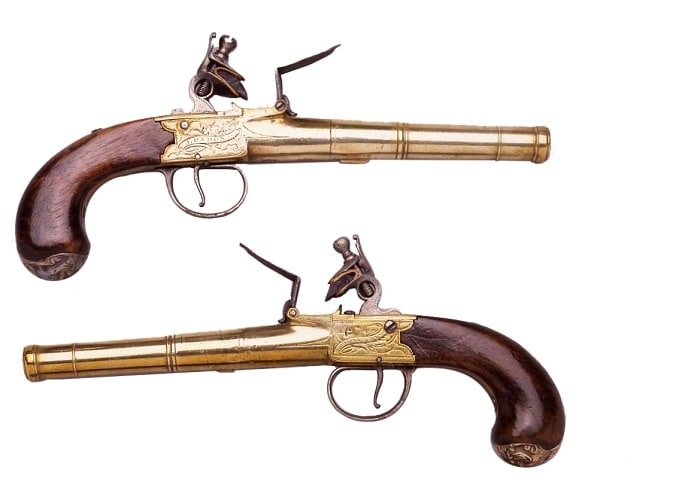 Jefferson bought these pocket pistols from John Dealtry in London in 1786, paying £4-10. “Because of its small size and detachable barrel, this type of pistol was useful when traveling. Visitors to Monticello noted that he hung a pair of pistols at the foot of his bed, but it is not known whether these are the ones he kept at hand.” They are displayed as such in Jefferson’s Bed Chamber today. (Photo: Monticello)

The 7th President, Andrew Jackson, like Washington had also served in his state militia as well as the Continental Army and the U.S. military, where he rose to the rank of major general. He also reportedly engaged in as many as 100 duels in his lifetime. 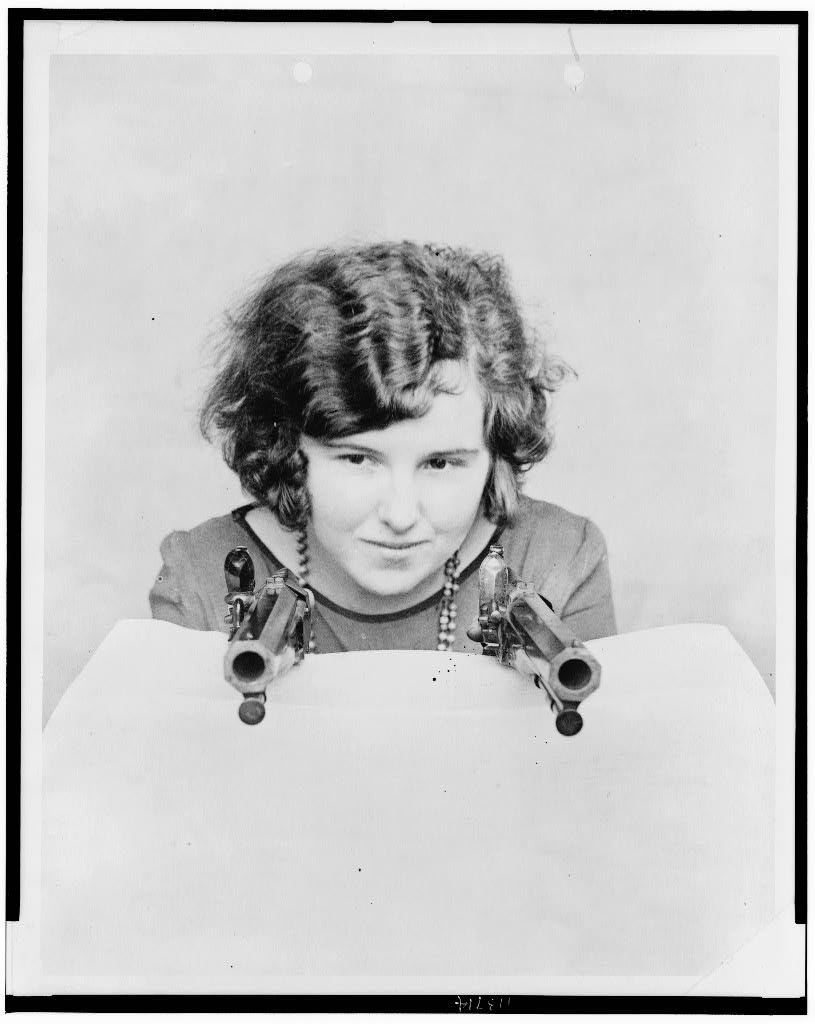 President James K. Polk served as a militia major in the 1830s and for years his house in Columbia, Tennessee showed off one of his Colt revolvers on the mantle.

Serving in the Illinois militia during the Black Hawk War, Abraham Lincoln knew firearms and famously test-fired the Spencer carbine on the White House lawn during the Civil War. An 1860 Henry rifle, engraved “Lincoln/ President/U.S.A.” was presented to Honest Abe during the conflict. However, the Army, in the end, ordered far more Spencers than Henrys. 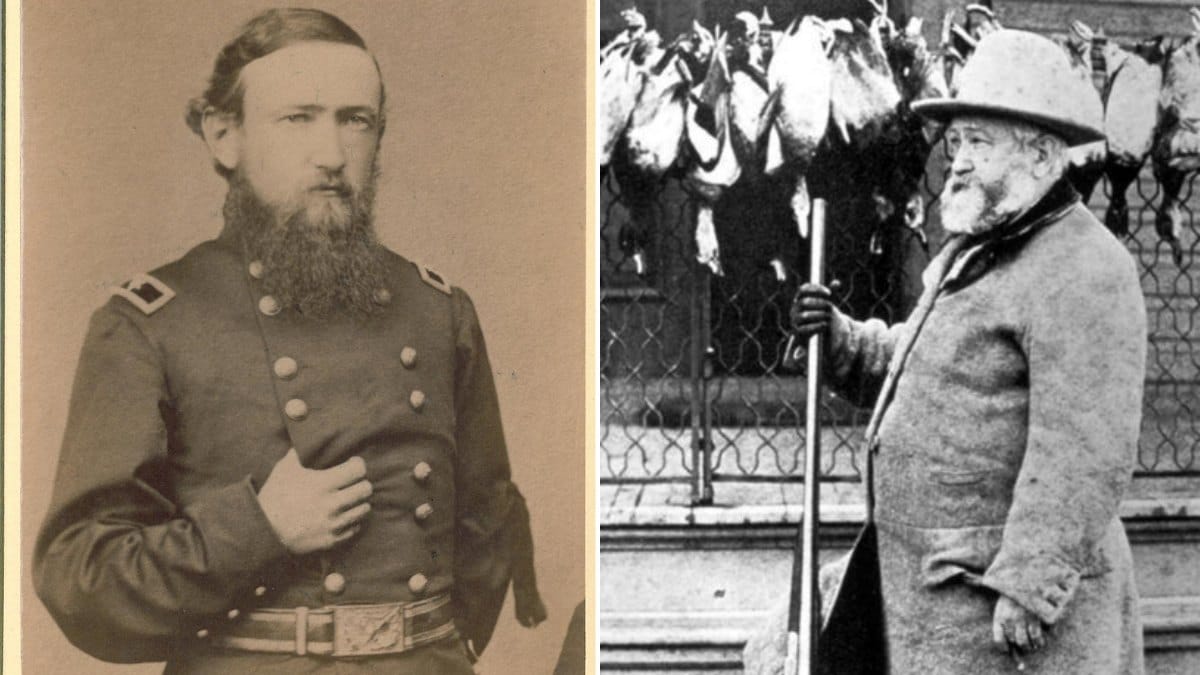 Besides adding six states to the Union, Benjamin Harrison fought in the Union Army during the Civil War– as did seven other Presidents– and was an avid hunter. His great-grandfather signed the Declaration of Independence. (Photos: Benjamin Harrison National Historic Site)

As President and popular war hero, Theodore Roosevelt– who earned perhaps a greater legend as a hunter and conservationist than any other American– had by 1903 led the New York City Police Department, been governor of the Empire State, was Assistant Secretary of the Navy and had famously helped recruit and lead a regiment of volunteers up San Juan (Kettle) Hill in the Spanish-American War. At age 42, he became the youngest president in history– a record that remains today, after already filling the position of vice-president.

It should be no surprise that Teddy moved to buy a specially-modified M1903 from Springfield Armory while in the White House, and actively used it in hunting for years. 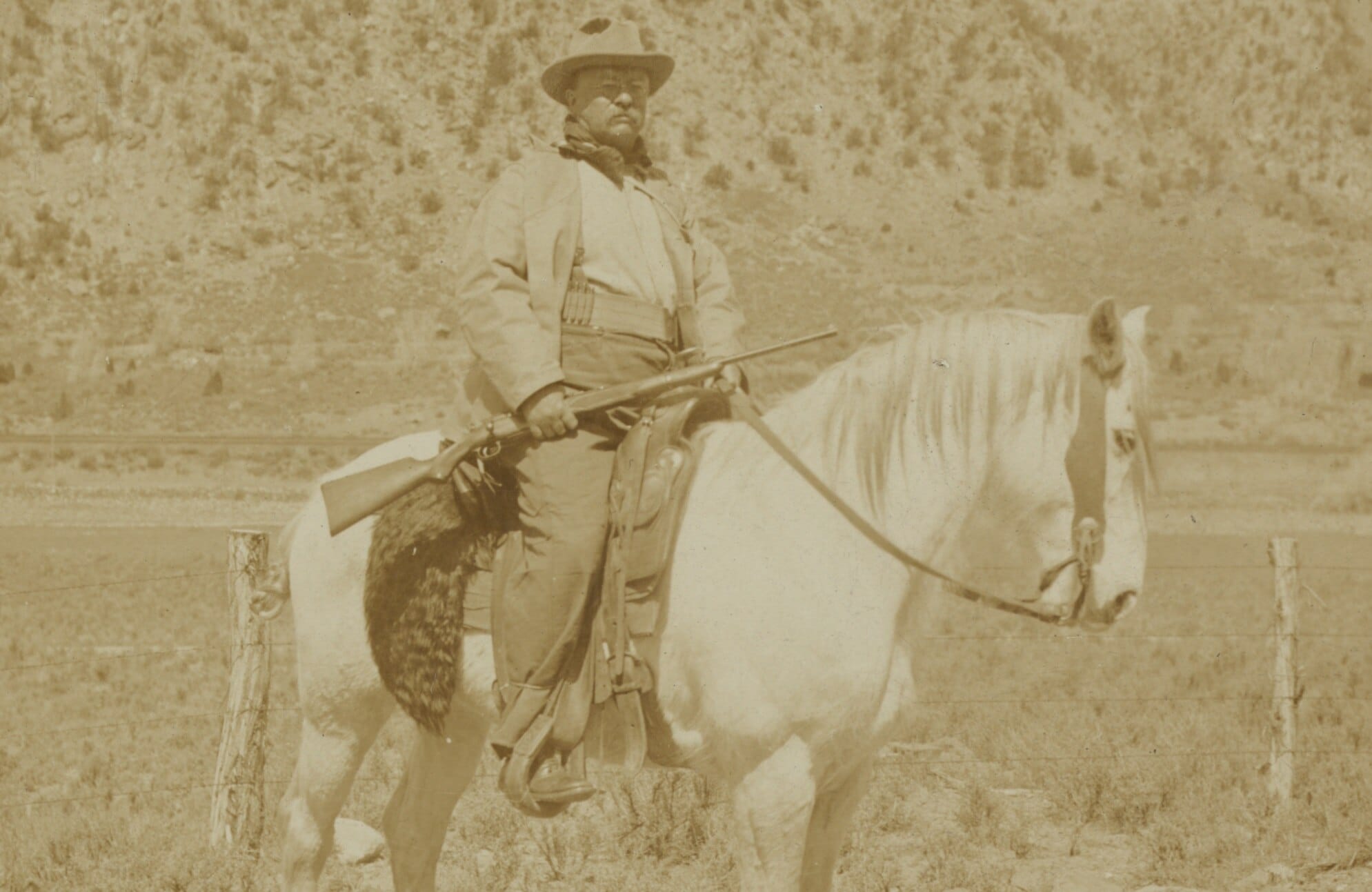 “On the great bear hunt President Roosevelt after leaving Newcastle for the mountains, 1905 Colorado.” Note the Colonel, who was president at the time, is carrying the modified M1903 and is using a Spanish-American War-era military-issue Mills Cartridge belt to hold reloads. If a current U.S. president went on a bear hunt with a “military rifle” today’s press would go nuts! (Photo: Library of Congress)

TR’s nephew Franklin D. Roosevelt, while Assistant Secretary of the Navy during the Great War, was photographed several times shooting rifles while visiting military ranges. A Democrat who liked guns, his wife Eleanor maintained a New York pistol permit for years and in 1935, after he became President, he established a pistol range in the basement of the Treasury Building for White House Police and started an annual shooting competition that ran until the 1960s. 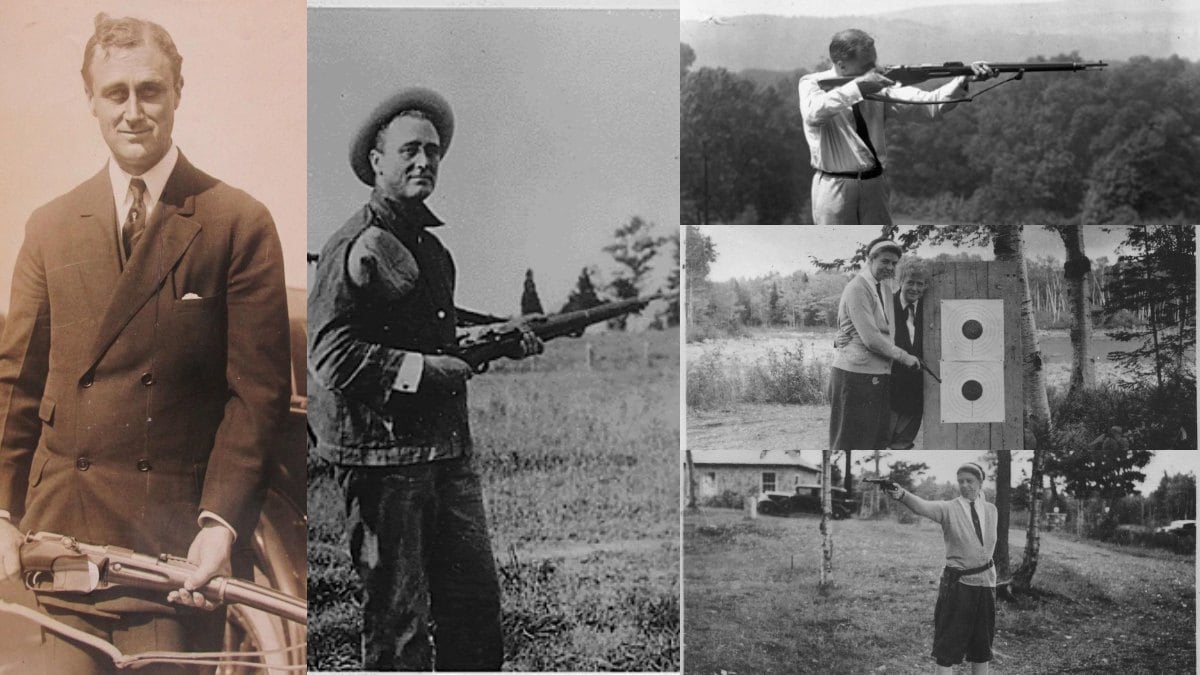 During WWII, FDR would visit Springfield Armory and shake hands with John Garand while the First Lady would open the doors of the West Wing to Soviet Red Army sniper Lyudmila Pavlichenko, with the two reportedly becoming friends.

FDR’s Vice President, Missourian Harry S. Truman, had fought in the Great War and had two handguns with him in France, a Colt M1911 .45ACP semi-auto, as well as a Colt M1917 revolver, both of which he kept when he was mustered out of active duty in May 1919. When Mr. Truman first went to Washington in the 1930s as the junior Senator from the Show-Me State, he brought another pair of handguns with him– reportedly once owned by the outlaw Jesse James. 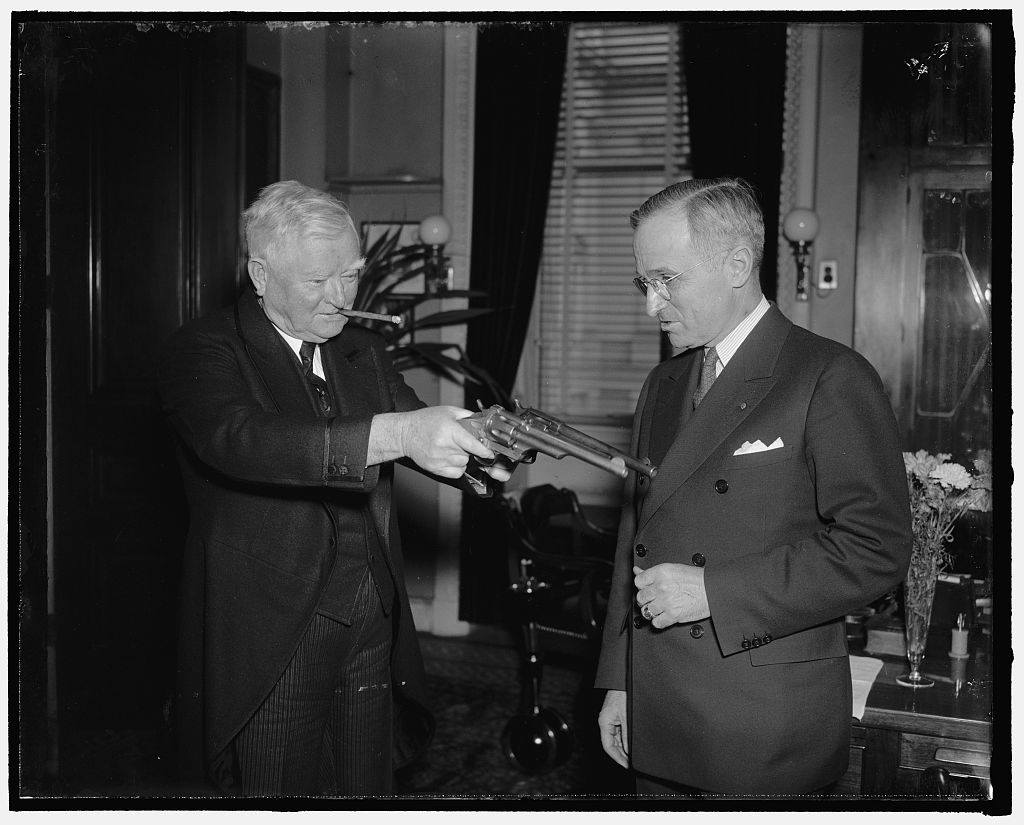 “Senatorial stickup. Washington, D.C., Feb. 17, 1938. After inspecting a couple of 45-caliber pistols formerly owned by Jesse James, famed bandit of another generation, Vice President Garner playfully tries his ‘stickup; technique on Senator Harry Truman of Missouri, the present owner of the guns. Senator Truman secured the guns in Southern Missouri from a doctor’s wife, whose husband received them in payment of medical services rendered Frank James, another of the James’ boys.” (Photo: Library of Congress)

Remaining in the Army Reserve until 1953, he eventually was promoted to colonel, even writing to Bess Truman of having to requalify with handguns while at summer training. He also had a curious habit as President of inspecting the small arms of his military escorts. 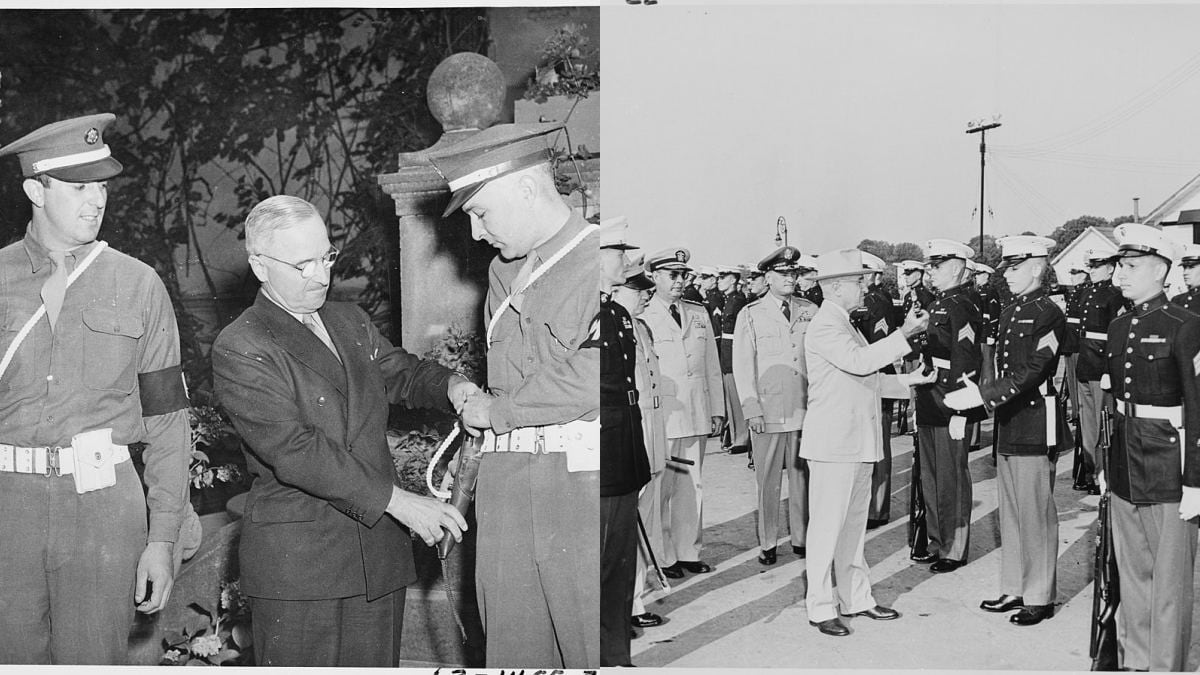 Following on the heels of Truman, former Supreme Allied Commander and 5-star General Dwight D. Eisenhower had long been a member of the gun tribe outside of his military service. He reportedly carried a small .38-caliber revolver everywhere he went during WWII, maintained a pistol permit, shot STEN guns and M1 Carbines with Winston Churchill and Omar Bradley, and established a skeet range at Camp David which proved popular with many Presidents since. 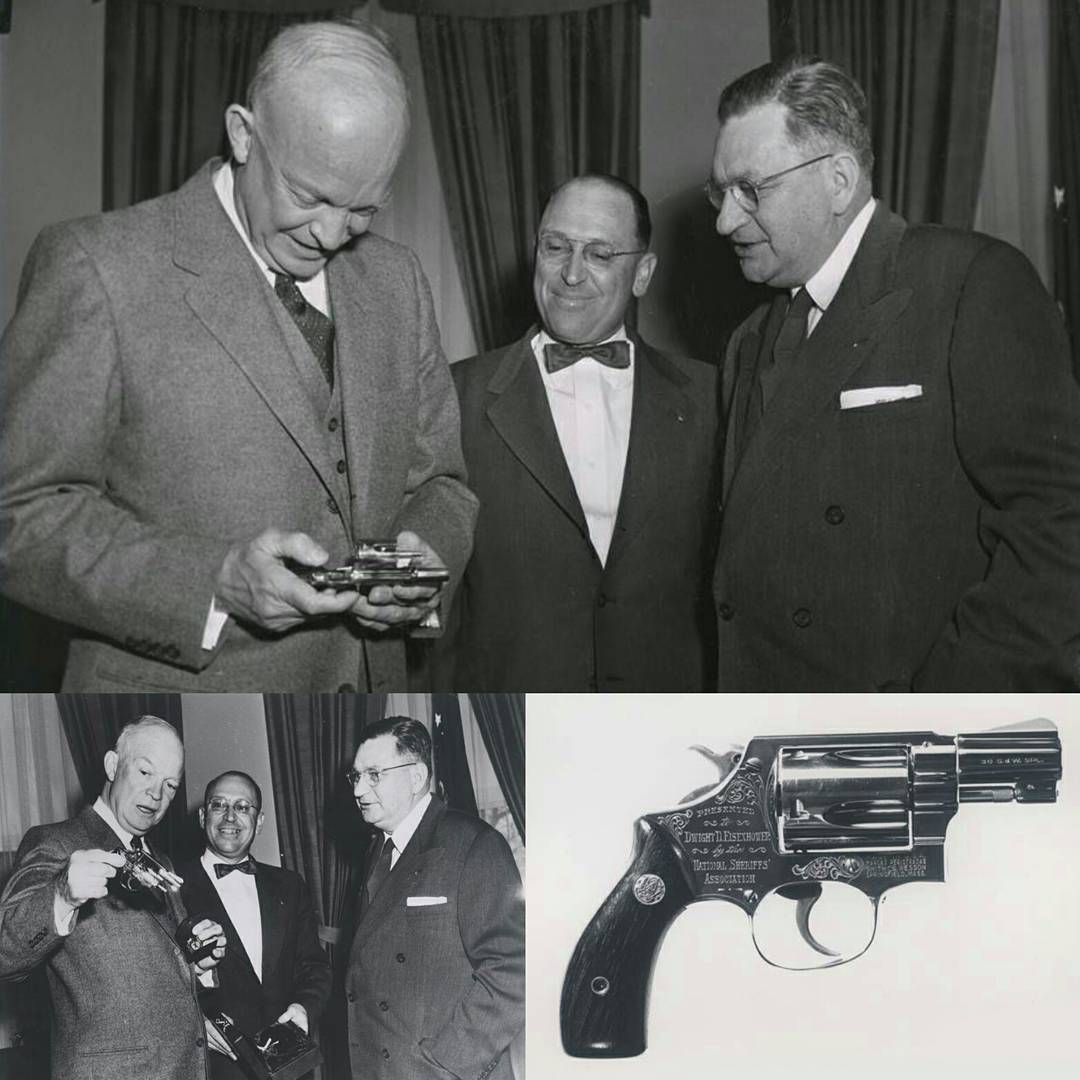 On December 16, 1953: “Deputy Sheriff Dwight D. Eisenhower was presented with a nickel-plated .38-caliber revolver today to use if he’s ever called up for posse duty. Eisenhower tried the gun for size in his inside coat pocket after checking the chamber and twirling the cylinder to make sure it wasn’t loaded. The President, who is an honorary deputy sheriff, was given the weapon by the National Sheriff’s Association “to back up his authority in the event he is ever called upon for posse service.” (Photo: Smith & Wesson)

While a Democrat, JFK was also a life member of the NRA as well as a sports shooter and firearms collector. As a Senator, the WWII Navy hero purchased an M1 Garand from the Army. Once he moved into the White House he was later presented a vintage Spencer Carbine, serial number 44066, because of his fascination with the Civil War, by a delegation from the Springfield Armory, which is now in on display at the JFK Presidential Library. 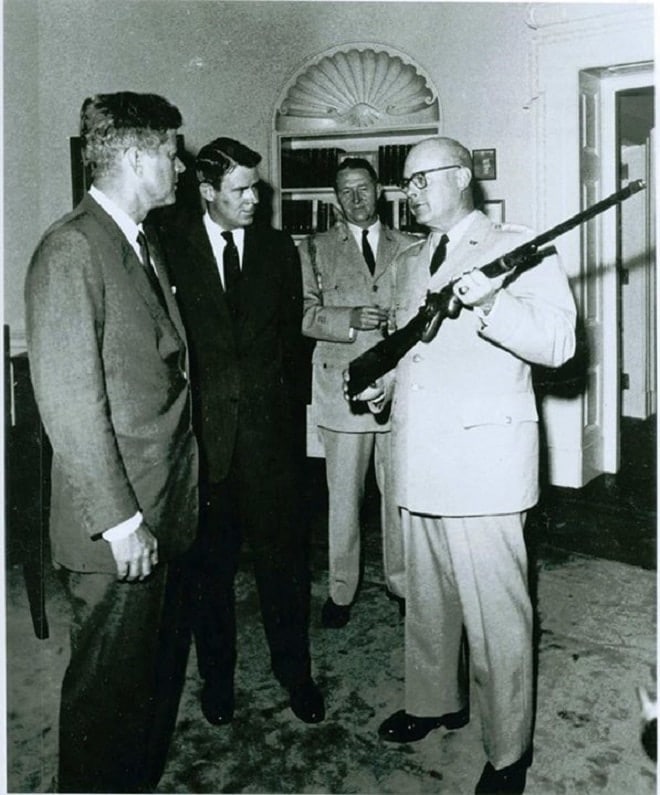 A fan of giving guns as well, JFK also arranged for a Winchester Model 21 shotgun to be presented to the head of Pakistan, then a vital ally in the Middle East.

President Gerald Ford, who was in office during the Bicentennial in 1976 and who’s father reportedly slept with a revolver under his pillow, received a beautifully engraved .30-30 Marlin 336. He had earlier been presented with a Bicentennial musket by Ivy Moore, a Daniel Boone descendant, while on a trip through North Carolina. 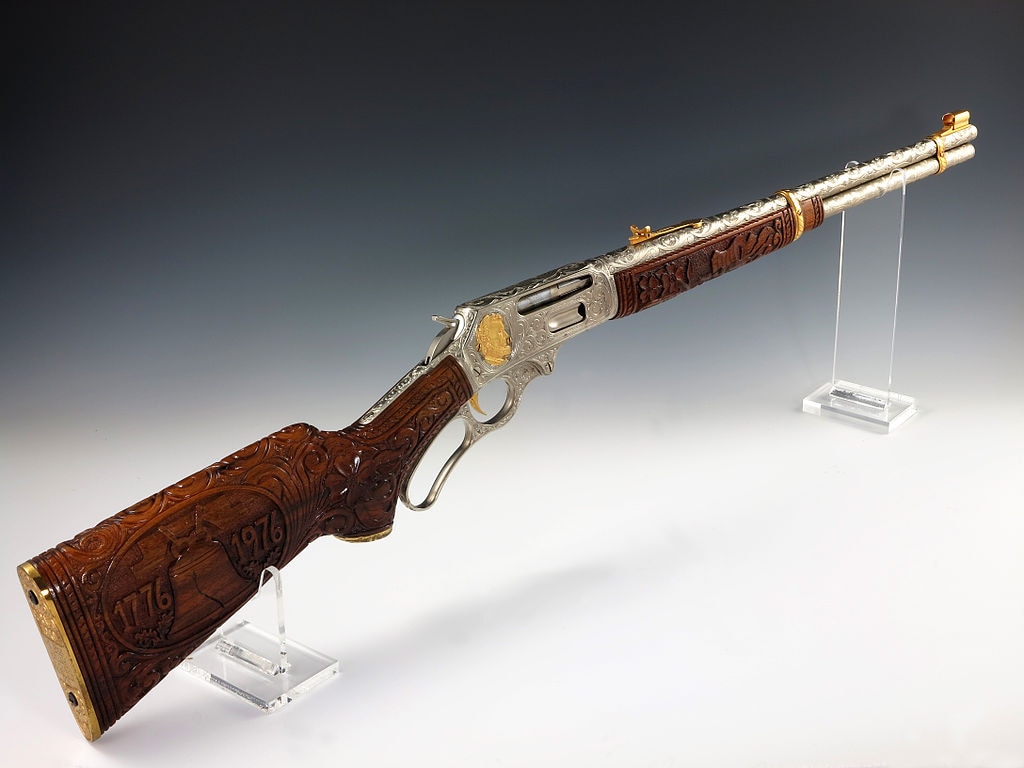 President Ronald Reagan, who served as a cavalryman in the California National Guard while clocking in as a Hollywood actor, owned a personalized Colt Single Action revolver. He later accepted a presentation flintlock in the Oval Office in 1982, famously posed with a bolt-action hunting rifle on Air Force One, and later accepted a Colt AR15 from the American Shooting Sports Council at his ranch in California after he left office.