Produced from 1933 through 1958, the trim Winchester Model 63 was at first known as “The Speed King.” (Photo: April Robinson/Guns.com)

For 25 years, Winchester made a terrific self-loading takedown .22LR rifle, the Model 63, and it still remains a hit with collectors today.

To understand the Model 63, one first needs to make a pit stop and consider Winchester’s Model 1903, introduced while Teddy Roosevelt was President. Chambered in then-newly-introduced .22 Win Auto, the “03” was designed by noted firearm engineer T.C. Johnson and was fed by a 10-shot tubular magazine inserted through the buttstock. A simple blow-back action, the rifle could be quickly taken down into two parts for storage.

Although it remained in production through 1932, the .22 Win Auto cartridge never caught on and wasn’t used by any other firearms on the market, thus handicapping the rifle’s popularity. With that, Winchester redesigned the rifle to accept the common UMC-designed .22LR, which has been around in one form or another since 1884. Further, the walnut stock was restyled from a typical straight stock found on the Model 1903 to one with a pistol grip. 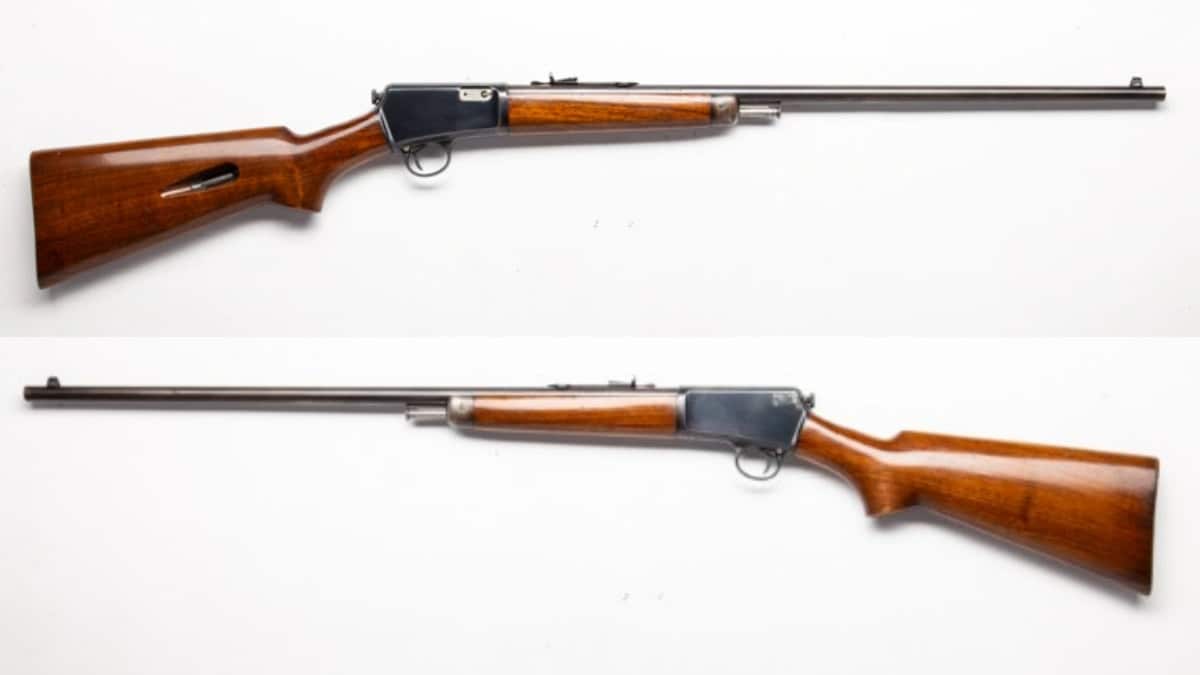 The Model 63 stemmed from the earlier Model 1903 but was chambered in .22 LR. Other changes included a reshaped pistol-grip stock on the new rifle, whereas the original design had a more simple straight stock. Note the loading port on the right-hand side of the stock to top off the magazine.

Entering the market in 1933 at a price of about $34– which adjusts to around $700 in today’s dollars– the new Winchester 63 was billed as, “the easiest handling, cleaning, and handiest shooting .22 caliber automatic,” available. In early marketing material, the new rimfire rifle was dubbed “The Speed King.”

The rod protruding from the forearm under the barrel is termed the “operating sleeve.” Pushing it in works the Model 63’s action.

Winchester, at introduction, described the Model 63’s stock as a “shotgun” style due to the pistol grip and its resemblance in shape to that used on the Model 1897 scattergun. The magazine is in the middle of the buttplate. The takedown screw is at the rear of the receiver.

With a minimum of outside moving parts or projections and a wide, rounded forend, the rifle had a very trim look and only weighed 5.5-pounds. Produced with 20- or 23-inch barrels with rear adjustable “sporting” sights, the new rifle sold briskly and remained in production well into the 1950s. 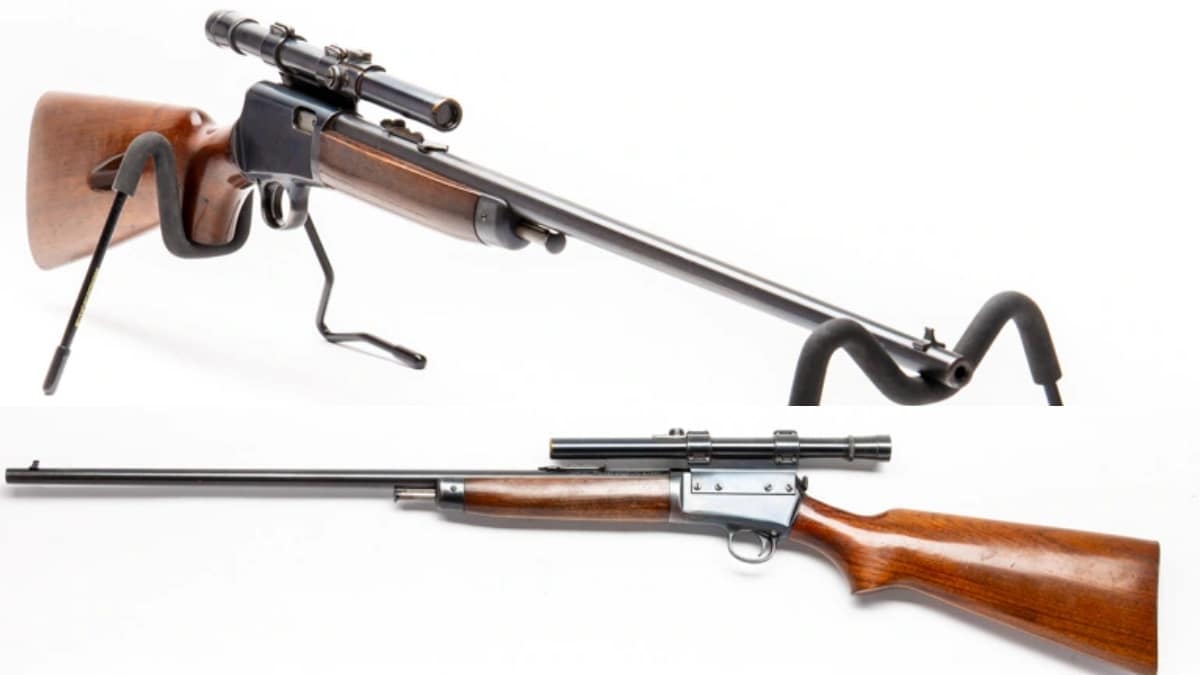 These guns are often encountered with period rimfire optics, such as this 1955 model with an offset fixed-power scope. 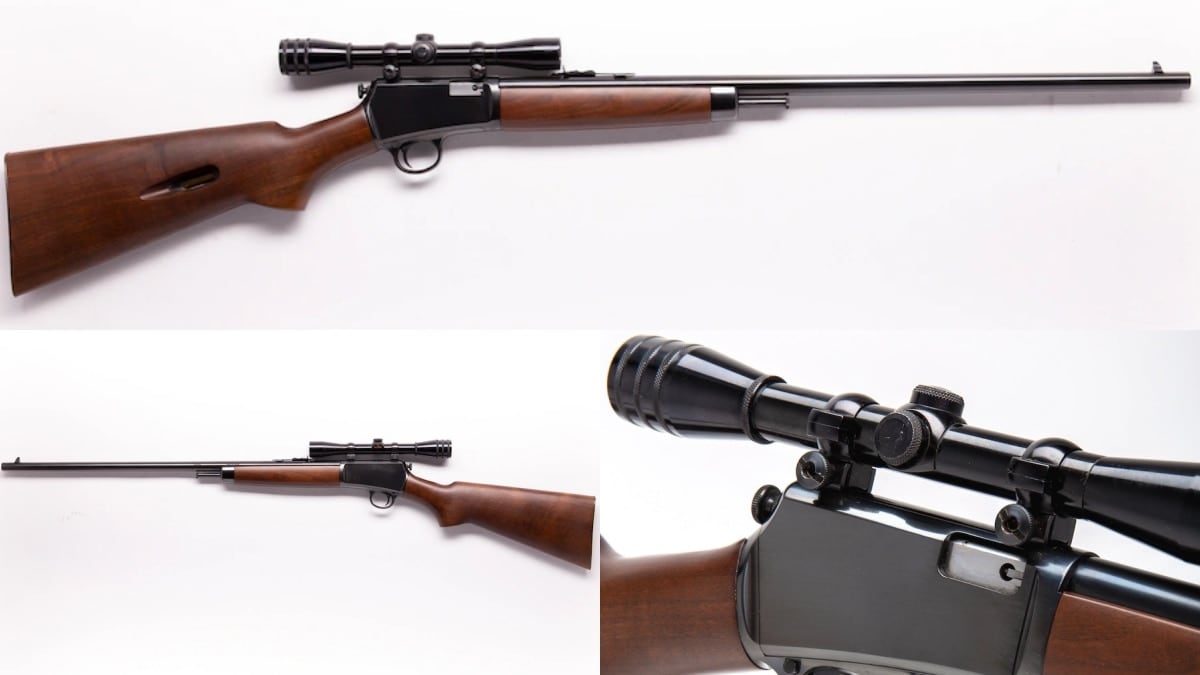 This Model 63 has a Redfield 4x rimfire scope. Towards the end of the gun’s production, models were made with factory-grooved receivers for tip-off scope mounts.

By 1958, with the changing nature of firearm production and a general shifting of times, the Winchester Model 63 was listed in catalogs for more than twice its initial price, $79. By 1959, it was not listed in the catalogs at all. The less expensive Winchester Model 77 took its place at a price point of $38 and the world moved on.

Still, the Model 63 remained sought after by gun owners, so much so that in 1997 Winchester rebooted the line for a limited run complete with engraved receivers and checkered walnut stocks. Those commemoratives soon disappeared into the hands of collectors.

It was the Speed King, after all.

If the Winchester 63 isn’t quite what you need to fill the space in your gun safe, but you are hungry for more classic firearms of all sorts, be sure to head over to the Guns.com Collector’s Corner, where you never know what you are going to find. History is just one click away.