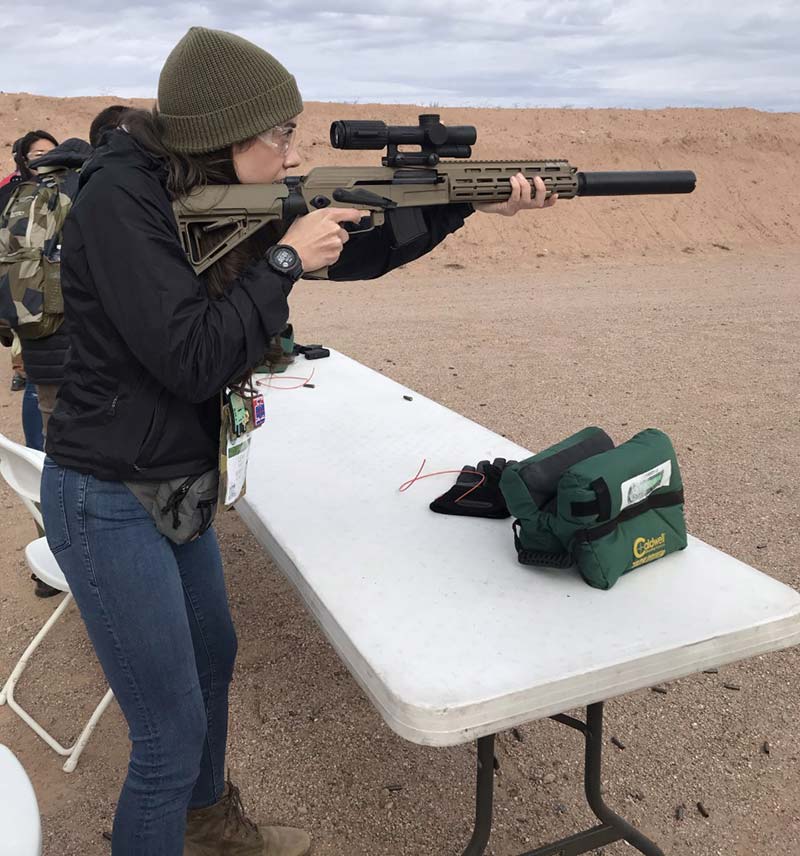 My second stop of the week was to sit down with Guns.com Ecommerce Manager, Leah Roberts. Joining the company around two years ago, she ensures that Guns.com has the latest and greatest gun inventory. Roberts chatted with me about her decision to join Guns.com, her job duties and who would make the best zombie apocalypse buddies.

Guns.com: So let’s kick this off with what led you to join Guns.com?

Roberts: I had actually been a firearm user for several years before joining Guns.com. I worked in other industries in marketing for a while beforehand. I saw the listing (for the job at Guns.com) and couldn’t walk away from the opportunity. The idea of getting to do something in an industry with a hobby that I love was definitely very appealing. I immediately applied for that opening and have been ecstatic to have the job ever since.

Guns.com: It’s definitely a real pleasure to get to mesh what you love with what you do. I know that some people outside the industry look at Guns.com and assume that we just play with guns all day — which some days we do — but by and large, we have other responsibilities that don’t necessarily center on just heading to the range. Can you give our readers an idea of what you do day-to-day and some of the challenges of being the E-Commerce Manager?

Roberts: It’s researching products, but not just that. It’s deciding what we’re going to put on sale and allocating stock so visitors have access to the newest and greatest thing they’re looking for. I also get our used inventory on the site and decide what goes where on Guns.com — what imagery to use, who to work with, who to feature, etc. My main focus is really on the products.

The challenge is trying to read the audience and figure out what they like and what’s appealing. From there it comes down to finding a way to put that in front of people in a way that is different from everybody else in the industry.

Roberts manages what you see online when you shop at Guns.com. (Photo: Guns.com)

Guns.com: I would say that it is really tough trying to predict what the community wants to see, especially because the industry has so many lifestyles and directions.

Roberts: It can be overwhelming at times but the plus side is you get to learn about a lot of different lifestyles. You know, I probably would have never looked much into cowboy action shooting but through this job, I’ve been able to learn about it and all its details. It’s been neat to venture outside of what I am interested in and learn about what other people like too.

Guns.com: I think that is the most fun part of working at a place like Guns.com, learning about all sorts of gun culture and history. Not to mention, Guns.com is just loads of fun to work at from a cultural standpoint. Historically, we started as a news site and moved into e-commerce but something that has always struck a chord with me is our commitment to representing women, What kind of impact does having a company like Guns.com that so readily supports women in the industry have on the community?

Roberts: Ultimately, it’s good for the Second Amendment and the community. It’s great to see female shooters and getting inspired by that and then seeing other people getting involved. It makes a difference to have a platform and a voice.

It’s been great to work at Guns.com! Parts of our marketing team are made up entirely of women, which you don’t see at other companies. I think it’s important to not just feature women’s ideas but also to welcome us as part of the community. We’re here, you know, doing what we love and it’s great to invite us.

Guns.com: So switching gears from the business side of things, let’s get to know you a little more. What is your background with guns? You said you owned guns before joining Guns.com so what led you to gun ownership?

Roberts: I did not grow up in a family that had a lot of firearms and I’d never been shooting or hunting or any of those things. A lot of my fascination actually came from pop culture — video games, movies, history, all those different things. As soon as I was old enough, I went and got a rifle and then not long after, I picked up my first handgun. Initially, I just wanted to have it. Then I became more serious about self-defense and concealed carrying. So it started with a fascination with weapons overall and it kind of blossomed into more serious training.

Guns: I think it tends to evolve like that. At first, it’s about getting that first gun, then, before you know it, you’re immersed in the lifestyle. So now that you have a few guns, what’s your favorite?

Roberts: Ohh, can I name a handgun and a rifle?

Guns: Sure, that sounds fair. This is a tough question and I realize it.

Roberts: Right now my favorite handgun, and I’ve been carrying it for a few months now, is the Archon Type B with night sights. My first rifle, and my favorite, is the Daniel Defense M4V11. Since I bought it, I have changed out some things and done some upgrades. 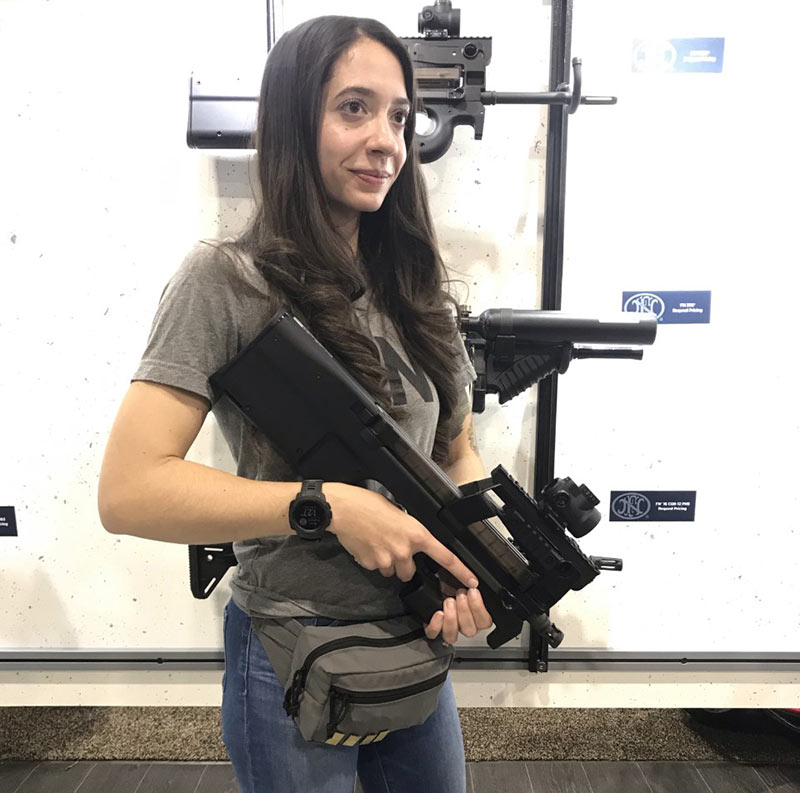 Roberts heads out to events and shows to meet with manufacturers and take cool pictures. (Photo: Leah Roberts/Guns.com)

Guns: Good choices. So one of the pitfalls of working for a gun company is access to guns. I know all of us that work at Guns.com have a running wishlist of guns we want, so what’s on your shortlist right now?

Roberts: Definitely an FN PS90 but the dream would be an FN P90, right? Also, for some reason, I really want a Marlin Camp 9. For a handgun, I am really liking the CZ P-10. I’ve been seeing people compete with those recently and they seem awesome.

Guns.com: We’re down to the final two questions. First, pink guns — yes or no?

Roberts: Not for me. Maybe because, for a while there, they chose this hideous shade of pink — like, you’re a girl so you must want this terrible shade of pink.

I am digging the Rose Gold that’s popping up everywhere though. So maybe not pro-pink but pro-Rose Gold.

Guns.com: I think, for the record, we need to be clear that Rose Gold and pink are not the same color.

Guns.com: Ok, last question. Zombie apocalypse breaks out. You can choose any three people in the world to help you survive. Who do you pick?

Roberts: Definitely someone with medical training. I don’t know who, but we need a doctor. The next person would be my dad. He’s been a ride or die for forever and I know he won’t leave me to the zombies. The last person would be John Wick. He could be a really great help.