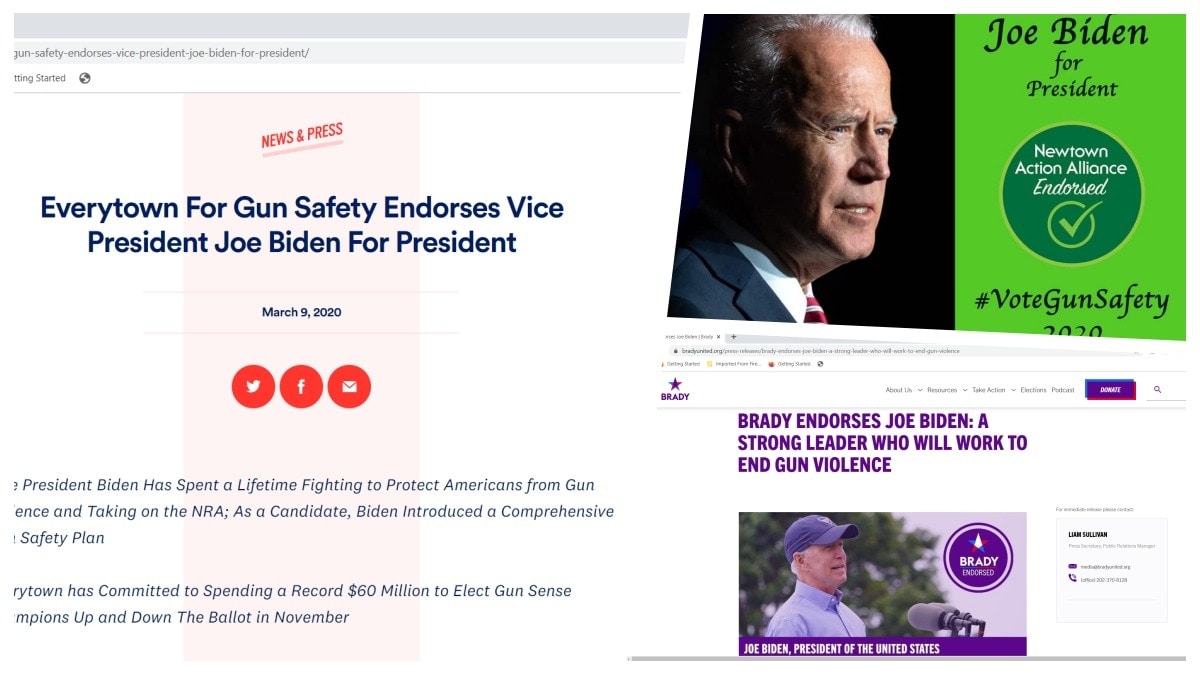 “From helping pass the bill that established the modern-day background check system, to crafting the Violence Against Women Act, to opposing immunity for the gun industry, Vice President Biden’s long-term commitment to reducing gun violence is crystal clear,” said John Feinblatt, head of Everytown, a group founded originally in 2006 as Mayors Against Illegal Guns by former New York Mayor Michael Bloomberg, who largely funds the organization. Everytown has promised to spend at least $60 million during this year’s election cycle to help put anti-gunner politicians in office.

“When every candidate is running on the issue of gun safety, deciding who to endorse becomes a question of who will prioritize gun safety as president, and Joe Biden has a track record that proves that he will,” said Shannon Watts, founder of Moms Demand Action, a group that merged with MAIG to help form Everytown in 2013.

“As a senator, Joe Biden worked with Jim and Sarah Brady to pass the landmark Brady Bill, which established our nation’s Brady Background Check system,” said Brady President Kris Brown, going on to say, “He championed and helped pass the federal assault weapons ban, a policy that saved lives and that he has pledged to reinstate as President.”

Notably, Brady formed in 1974 as the National Council to Control Handguns, then morphed into Handgun Control, Inc, before settling on its Brady monicker in 2001.

“It’s not by accident that, in 2020, every Democratic presidential nominee has adopted a bold and comprehensive platform on gun violence prevention—including background checks, an assault weapons ban, and limits on high capacity magazines,” said Po Murray, Chair of the Newtown Action Alliance, formed in 2013.

As for Biden, his official campaign website has a 3,700-word “vision” for gun control that includes all of the above, as well as rebooting the old Obama gun campaign, but also pledges to repeal the 2005 Protection of Lawful Commerce in Arms Act, which insulates the gun industry from frivolous lawsuits.

Further, his promised ban on “assault weapons” would require that guns and magazines already in circulation be regulated by the National Firearms Act, which would involve mountains of red tape and additional taxes to register formerly common semi-automatic firearms with the Bureau of Alcohol, Tobacco, Firearms and Explosives.

Biden also supports gun rationing to one firearm purchase per person per month, reinstate the Obama-Biden era policy that strips gun rights from millions who receive disability through the Social Security Administration– a ban that even the ACLU had issues with— and enact legislation to prohibit all online sales of firearms, ammunition, kits, and gun parts.

Yup, sites like Guns.com, Lucky Gunner, GunsAmerica, and all the rest would go “poof” under the Biden vision.

There are also promises on Biden’s platform to help provide federal tax dollars to states to encourage them to set up gun licensing programs and so-called “red flag” seizure orders. Then would come a national Task Force to explore new routes for gun control.

Finally, his platform promises to, “put America on the path to ensuring that 100% of firearms sold in America are smart guns,” a measure that has been called a slow-motion gun ban as no such firearms are commercially made.

“All gun owners need to know about the man who wants to be their next president,” the Citizens Committee for the Right to Keep and Bear Arms said today.

CCRKBA Chairman Alan Gottlieb, warned, “Biden supported the Brady Bill in 1993, he opposed the Protection of Lawful Commerce in Arms Act, and he’s backed every gun control measure to ever come along.

“On top of that,” Gottlieb continued, “embracing gun ban extremist Beto O’Rourke recently in Texas was clearly a warning that if he’s elected president, Biden will make good on his threats to make radical gun control a top priority.”

Update: On Wednesday, Biden completed the hattrick of gun-grabber endorsements with the official declaration of support issued by Giffords.

“As we’ve built a gun safety movement and campaigned to pass safer gun laws across America, Joe has been there with us,” said former U.S. Rep. Gabby Giffords in a statement. “And as President, I know he will stand with the millions of Americans committed to fighting for gun safety.”