Over its 165-year history, Colt became one of the most prolific firearms manufacturers on the planet, giving the gun community some of the coolest handguns around. With such a storied history and long run making guns, you’re bound to find a few really cool ones floating around.

We dug through the Collectors Corner in the Guns.com Vault to uncover some of the coolest and most valuable finds that we have to offer. Below you’ll find some of the most iconic and sought after designs that Colt has ever produced. 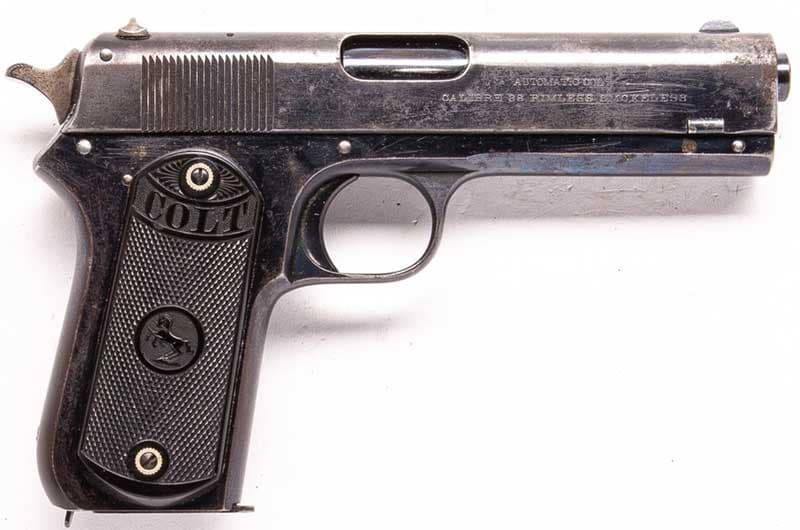 If this 1903 Pocket Hammer could talk…

As the name suggests, this John Browning design was introduced in 1903 though production didn’t really ramp up until 1904. This pistol was produced until 1927 when production shut down likely due to the .38 ACP falling out of favor and designs like the 1908 Pocket Hammerless gaining popularity. Even so, this pistol became a very popular handgun in its time and was an important forerunner of the better-known M911. Check out the selection of beautiful carry pistols we have in stock by clicking the button below! 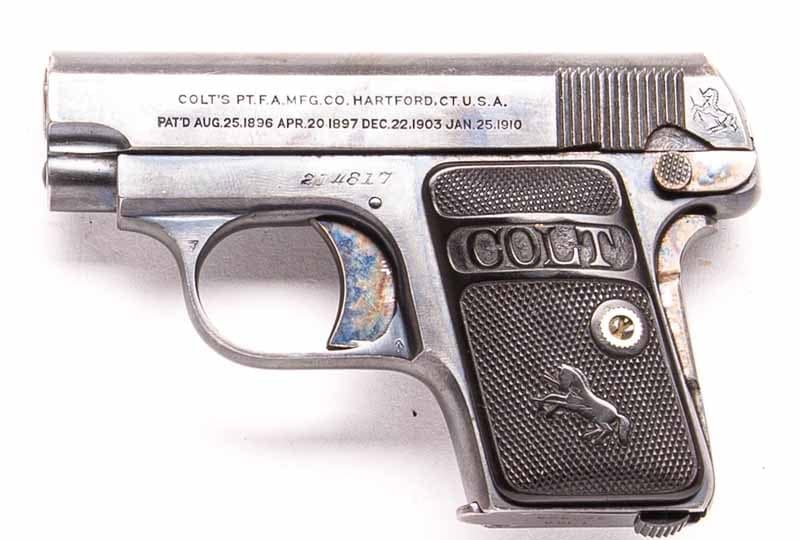 Approximately 420,000 1908 Vest Pocket pistols were produced in the 40 years that production ran. This makes this little pistol one of the most popular carry guns in the first half of the 20th century and one of John Browning’s most iconic designs. This beautiful little gun from the Guns.com Vault comes with the case-hardened finish on the trigger, safety catch, and grip safety to complement the black plastic grips. Add this to your collection today by clicking the button below. 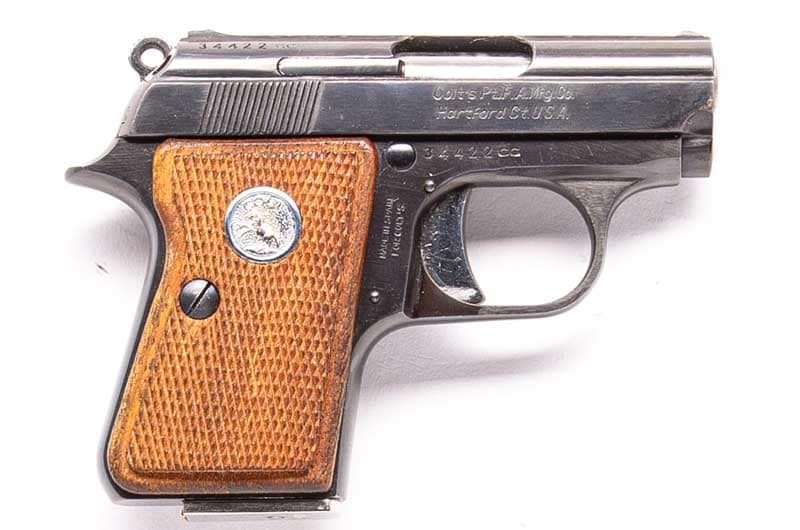 The Colt Junior is a curious little gun which was Colt’s attempt to revive their pocket carry lineup after the failed relaunch of the 1908 Vest Pocket. Manufactured by Astra as a Colt-branded version of their Cub pistol, this 4.4-inch gun was introduced in 1954. It was imported from the Spanish firearms manufacturer until the Gun Control Act of 1968.

Afterward, it had a brief revival being assembled in the U.S. from Spanish-made parts but Colt ultimately shuddered production on it in 1973. You can add this ultra-concealable mouse gun to your collection by clicking the button below. 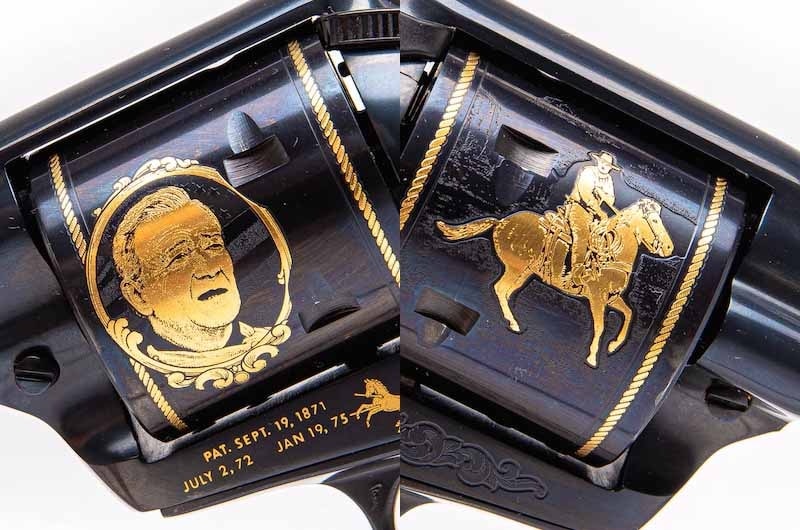 If you’re a fan of the Duke or fine single-action revolvers this is a must-have. This limited-edition Colt Single Action Army is numbered 1608 of 2500 making this a rare and collectible gun that would sit well in a display case. There is a lot of beautiful gilt work going down the barrel, on the cylinder and you even get his signature going down the backstrap. This all compliments the blued finish and bone grips quite nicely.

Even if you’re not a fan of the Duke, we have a lot of traditional Colt SAA revolvers in the Vault, like this beautifully patinaed example below. Check the whole selection out by clicking the button below. 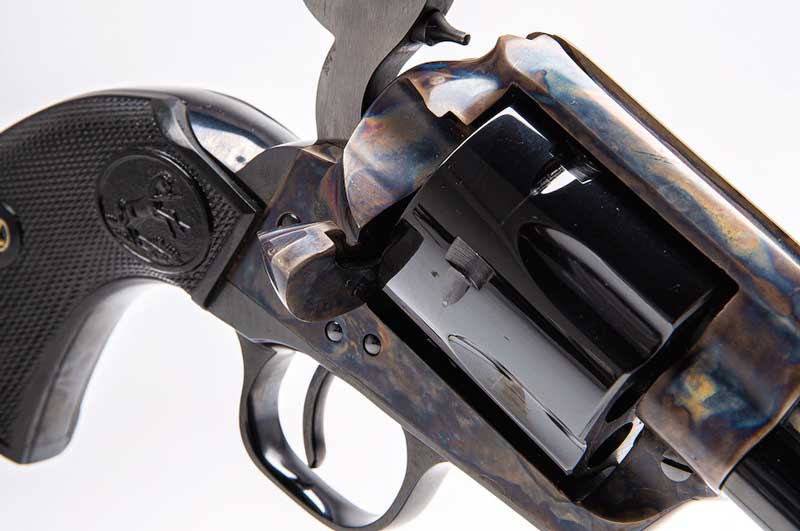 The beautiful case-hardened finish of the Colt SAA

GET AN SAA TODAY! 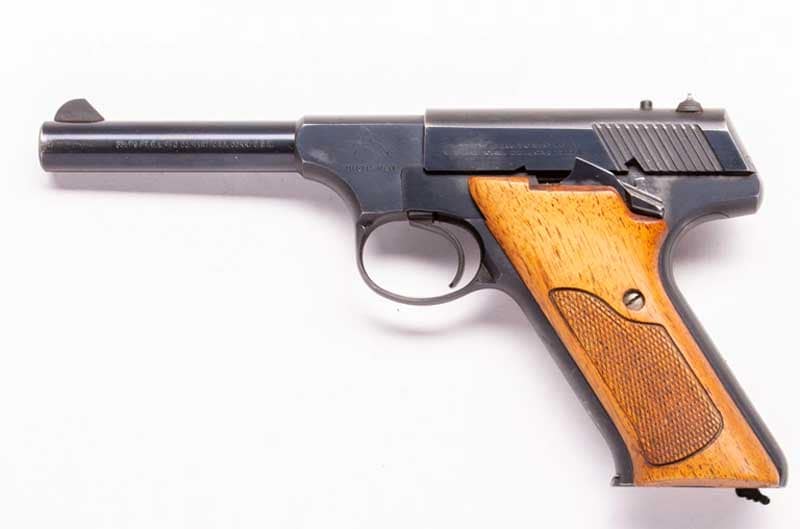 The Colt Huntsman is perfect for beginners or varmint hunters

The Colt Huntsman went into production in 1955 as a more affordable version of the Colt Woodsman. Marketed as both a target pistol and varmint hunter these became very popular and enjoyed a long production run until 1977. This particular model we have in the Vault has the fixed sights along with a 4.5-inch barrel, perfect for beginners. Check out all the Woodsman models we have by clicking the button below.

GET A HUNTSMAN TODAY! 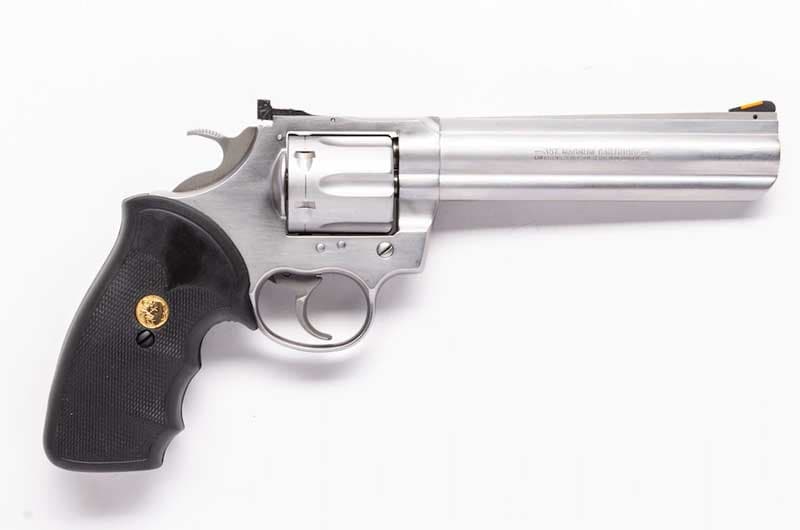 The King Cobra has had three different production runs starting in 1986. The King Cobra is known for being easy to shoot and handle, with shorter barreled models seeing time as a carry gun. This particular model we have in the Guns.com Vault has a 6-inch barrel with adjustable rear sights and checkered black rubber grips. Perfect for target shooting or home defense add this King Cobra to your collection today by clicking the button below.

GET A KING COBRA! 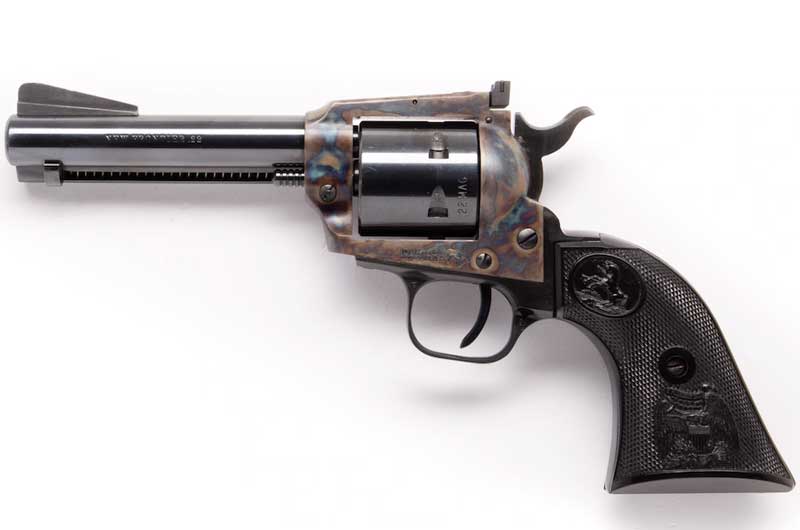 The New Frontier is an attractive single action target pistol

The Colt New Frontier went into production in 1961 but its design traces back to the 1890s in the Colt Flat Top Target. This single-action revolver is designed with the target enthusiast in mind and differs from the famous Colt Single Action Army in that it has target adjustable sights. Colt had production runs from 1962-74, 1978-82 and reintroduced in 2011. It’s chambered in a variety of calibers but this beautiful case-hardened model is of the .22 LR variety.

If the 4.4-inch model doesn’t do it for you we also have a classic Ned Buntline Commemorative model chambered in .45 LC. This nickel-plated beauty has a 12-inch barrel and ships with a beautiful display case. Add it to your collection today and be the talk of the range tomorrow! 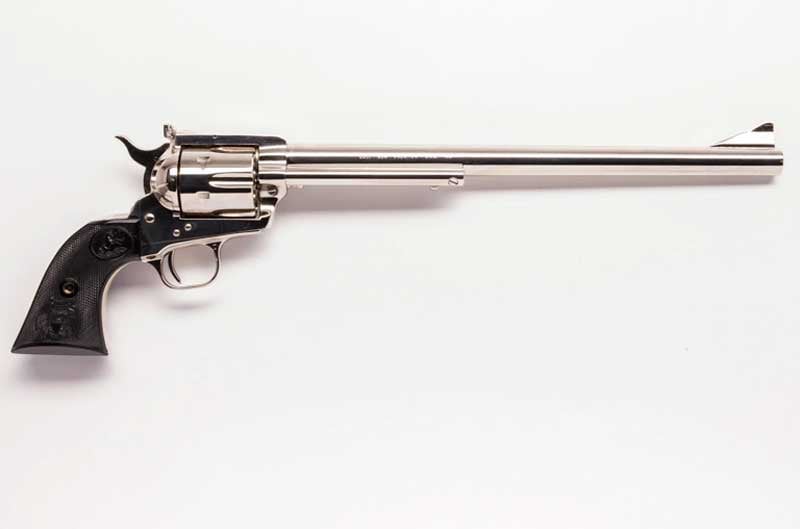 Imagine the looks you’ll get at the range…

GET A NEW FRONTIER! 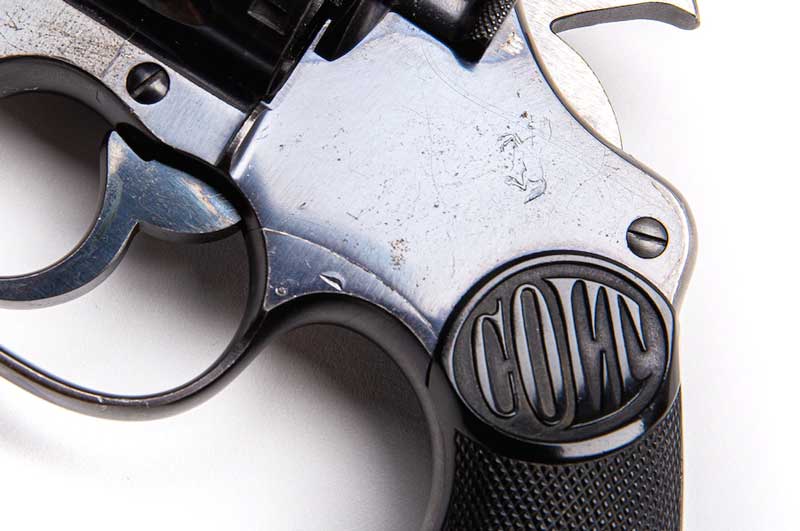 The Colt New Service went into production in 1898 and was produced until 1941 in one form or another, seeing an estimated 356,000 hit the market. It saw action in both World Wars as both the .45 (Long) Colt caliber M1909 and later as the upgraded .45ACP-chambered M1917. With that being said, you can find these revolvers chambered in a variety of calibers but the one featured here from the Vault is .45 LC. Add it to your collection today by clicking the button below.

GET A NEW SERVICE!

The original Colt Python is a sought-after collector piece for any revolver enthusiast. This particular model from the Vault has a beautiful factory satin nickel finish, referred to as “Royal Coltguard” or “E-Nick” by the company. The finish is matched nicely by the checkered rubber grips complete with a golden Colt medallion. This .357 Magnum has a 4-inch barrel and is ready for the right collector today.