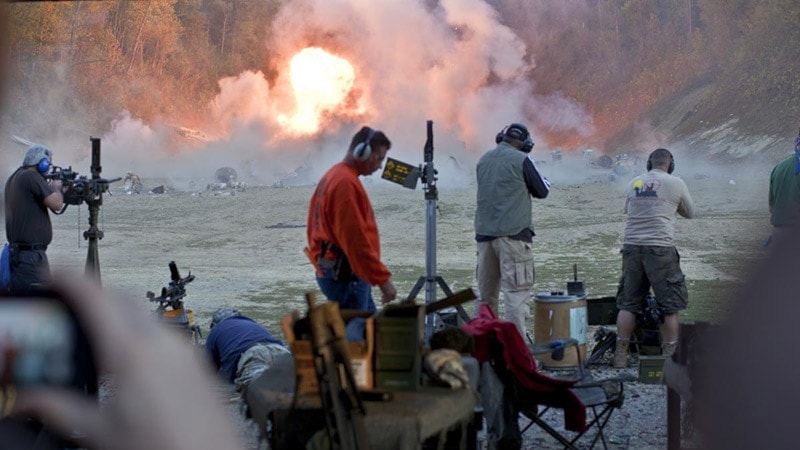 The Knob Creek Machine Gun Shoot in West Point, Kentucky is the biggest event of its kind in the world. It takes place every April and October and attracts upwards of 20,000 Second Amendment loving folks. The night shoot is second to none.

The next shoot is scheduled for April 3, 4, 2020. As of March 16, the shoot is still happening. However, the situation concerning the coronavirus pandemic is evolving rapidly. Management at the Knob Creek Gun Range is keeping a close eye on developments.

“I’m waiting on something from the governor saying they don’t want anything happening. But as it is right now, we’re a go,” Kenny Sumner, the owner of Knob Creek Gun Range, told Guns.com by phone.

Earlier on Monday, Kentucky Governor Andy Beshear announced plans to order all restaurants in the state to stop dining in. On March 15, the Centers for Disease Control and Prevention (CDC) urged against large gatherings of people, usually 50 or more. On Tuesday, President Trump and the White House Coronavirus Task Force issued recommended guidelines to help “flatten the curve” when it comes to the spread of the virus to include avoiding social gatherings in groups of more than 10 people.

In recent weeks, numerous staple yearly gun events were canceled or postponed to include the 149th NRA Annual Meeting & Exhibits in Nashville, several CMP-sponsored competitions, the famed Wanenmacher’s Tulsa Arms Show, and Kalash Bash Texas 2020. Likewise, the Big Sandy Shoot in Arizona has been postponed but due to rain inundation, not coronavirus.

The Show Will Go on, for now at least

It’s not often the Knob Creek shoot is canceled. The last time was in April 2012 when torrential rains caused major flooding and the bridge leading into the gun range collapsed. “We work so hard to put it on every six months. It’s just hard to believe that a little flu virus is going to keep it from happening,” he said. He also noted that much of the event takes place outdoors.

According to Sumner, the best way to stay up to date on whether the April shoot is happening or not is to keep an eye on the Knob Creek Gun Range Facebook page. “As soon as I see that we will not be having it, it will definitely be posted there,” Sumner said.

In the meantime, enjoy the short documentary we made about the Knob Creek Machine Gun Shoot below.