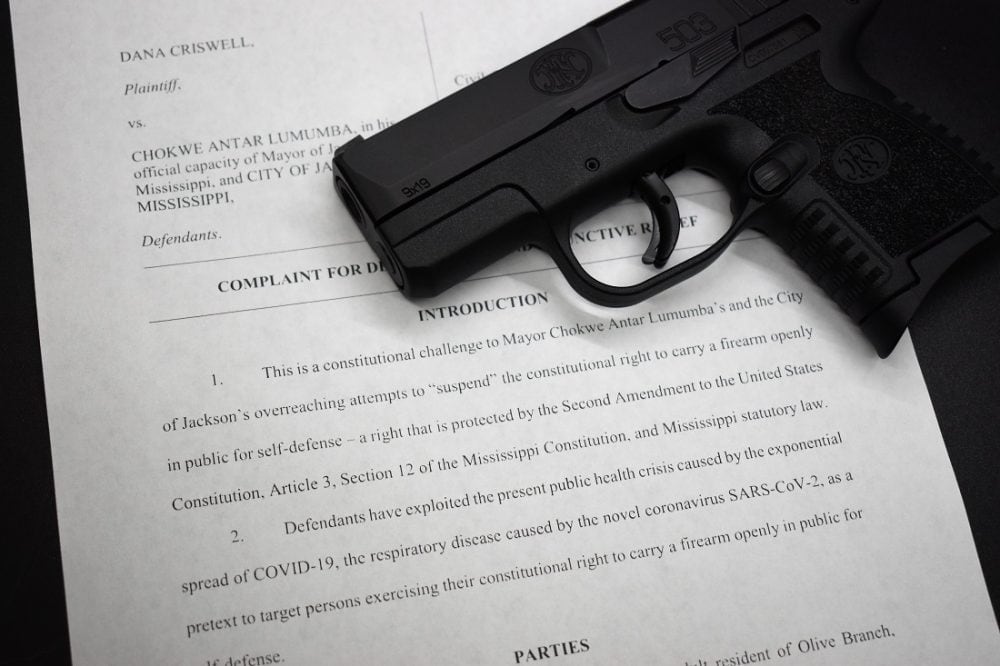 Jackson, Mississippi’s mayor issued an executive order banning open carry on Saturday and was sued for it in federal court on Tuesday. (Photo: Chris Eger/Guns.com)

On Tuesday, the non-profit Mississippi Justice Institute filed a lawsuit against Lumumba on behalf of State Rep. Dana Criswell (R). The 13-page filing, in U.S. District Court, holds that the Mayor does not have the authority to override rights protected by both the U.S. and Mississippi Constitution, even during a state of emergency.

“As a citizen of the great state of Mississippi who has regular business in our capital city of Jackson, I was shocked by the recent announcement by Mayor Lumumba,” said Criswell in a statement. “I take the protection of myself and my family very seriously and believe deeply in the constitutional right to keep and bear arms. The mayor’s attempt to disarm me and deny me the ability of self-defense puts me and my family in danger anytime we are in Jackson.”

Other legal action could be on the horizon for Lumumba, a progressive who previously pledged to turn Jackson into the “most radical city on the planet.” Mississippi Attorney General Lynn Fitch on Sunday rebuffed the Mayor in a two-page letter in which she explained that he did not have the power to bar open carry in the city.

“Mississippians enjoy the right to lawfully open carry in all of Mississippi’s 82 counties and in every municipality within the State,” said Fitch, a Republican. “The City of Jackson is no exception. The City lacks statutory authority to suspend a state statute or constitutional provision. Accordingly, I ask that you rescind the Order immediately. I take seriously my obligation to protect Mississippians’ constitutional rights, and I will take every action available to my office to ensure these rights are not infringed upon.”

Fitch’s letter was echoed and supported by national gun rights organizations including the National Rifle Association.

Jackson’s Democrat-controlled City Council voted unanimously on Tuesday in favor of a resolution opposing a ban on open carry in the city, as reported by the Clarion-Ledger.  The lawmakers stressed they were not consulted on the ban beforehand and are disinclined to enter into what is shaping up to be a wave of litigation.

“I’m in favor of anything we need to do to lower crime in Jackson, but this is a legal issue for the city,” said Ward 6 Councilman Aaron Banks.

So far, the only supporters for the ban outside of Lumumba’s office seem to be anti-gun groups, with the state’s Mom’s Demand Action chapter calling it a “Wise decision!”

An online petition launched by Lumumba over the weekend to stump for a statewide ban on open carry had just 110 signatures as of Wednesday morning. It is not known how many of those, if any, are registered voters in the Magnolia State.