Every once in a while, I like to take a trip to the Guns.com Vault and grab a pistol that may be a tad older and feeling a little less loved. For this review, I snagged CZ’s first full-size polymer pistol, the CZ P-09, to take it for a test drive. 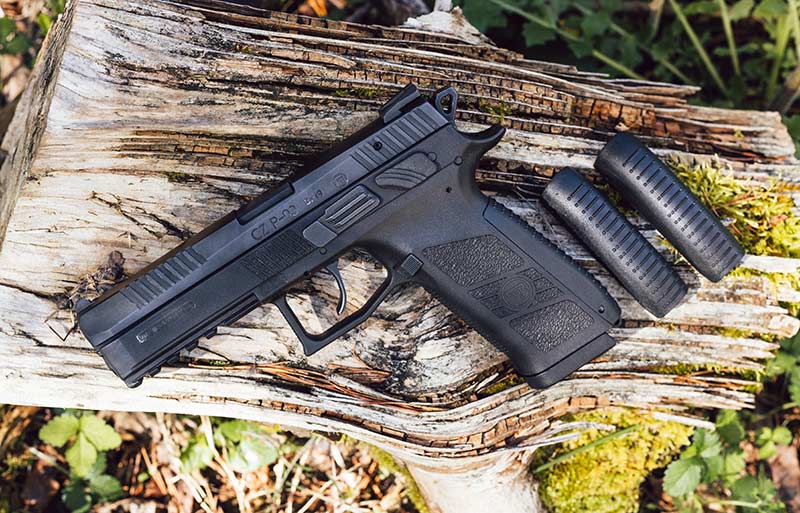 Based on the CZ 75, the P-09 ditched a metal frame in favor of a polymer one, becoming the company’s first full-size polymer pistol offering. The addition of polymer to the CZ pistol lineup brought the company into a more modern era, also pulling double duty delivering more rounds than other standard pistols.

Chambered in 9mm, the CZ P-09 packs a whopping 19+1 with a flush fit magazine providing plenty of rounds to accomplish training, range, or self-defense goals. Want even more lead? Grab an extended mag for 21+1. Be prepared, however, to drop some coin on those magazines as they don’t come cheap — $40 to $50 is about the going rate for a single mag. 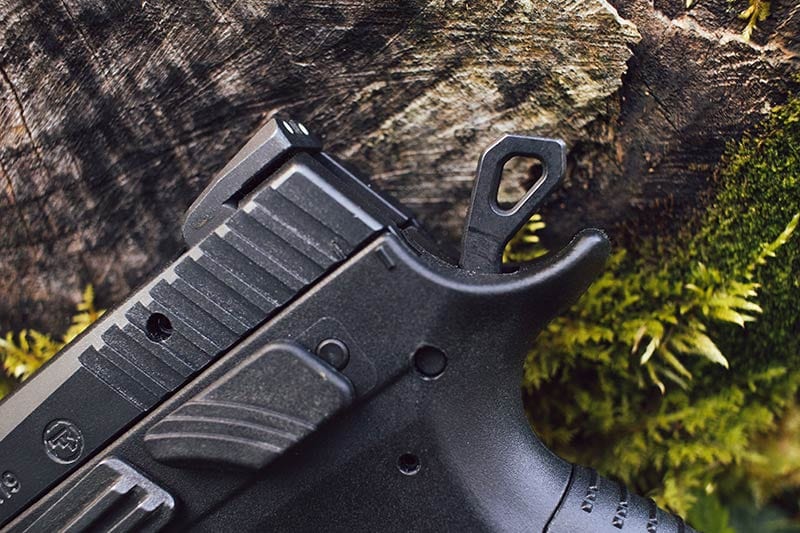 The gun ships with a decocker installed but can be swapped over to a manual safety. (Photo: Jacki Billings/Guns.com) 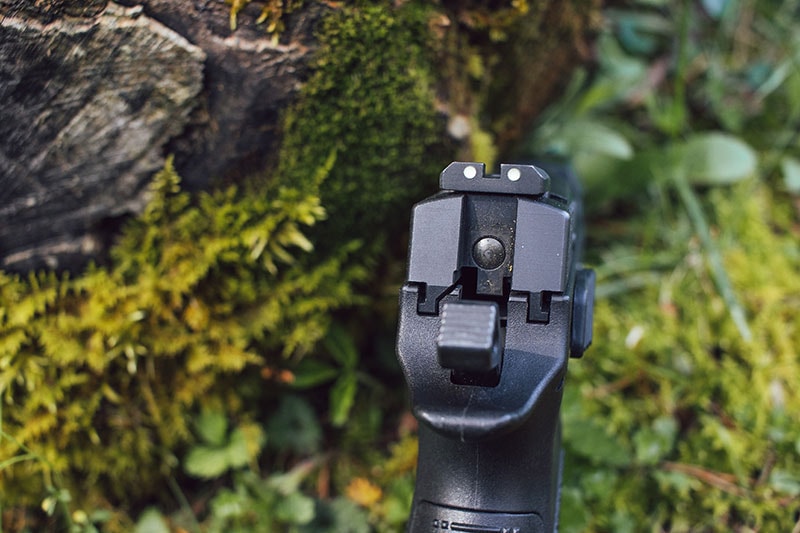 The sights are standard but do well enough. (Photo: Jacki Billings/Guns.com)

Measuring 8.1-inches in total length, the P-09 ships with a 4.54-inch barrel. The pistol boasts an Omega DA/SA trigger system and ships with a de-cocker installed but those can be converted to a manual safety with some additional parts — if you’re into that sort of thing. No surprise, I left the gun as is because I am not a huge fan of manual safeties. The de-cocker and firing pin block work together to allow shooters to safely lower the hammer on the P-09.

The P-09 offers some versatility to shooters by way of interchangeable backstraps — shipping in small, medium, and large. I opted for the smaller size because, well I am micro after all. Rounding out the features, the CZ pistol brings a 1913 Picatinny rail for lights, lasers, or any other compatible accessory. 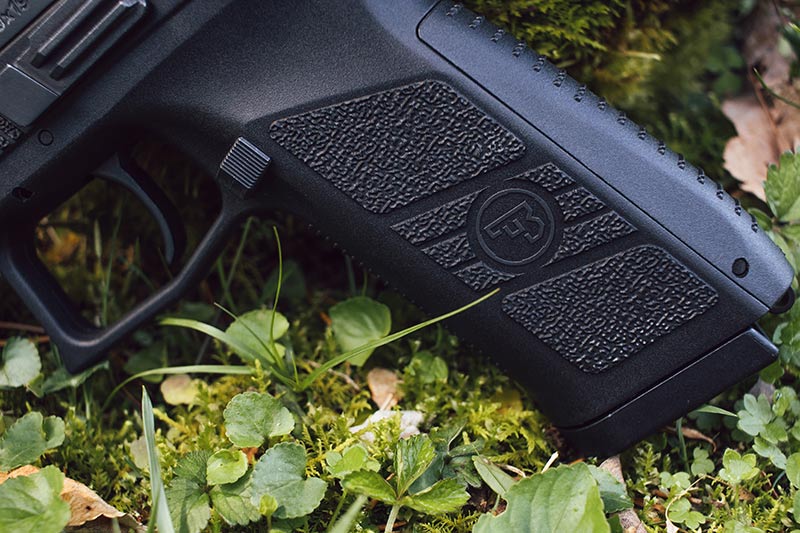 The CZ’s grip was a little large for my petite hands. (Photo: Jacki Billings/Guns.com)

The CZ P-09’s full-size design gave me plenty to grab onto at the range — though, as someone with small hands it sometimes proved tough to situate my grip on the first grab. Again, this system does come with backstraps but even with the smallest installed, I still found myself adjusting my grip. Some guns are just not meant for tiny people and this might be one of them.

Despite some gripping issues, the P-09 shot well with no issues. After a day of plinking through tons of different brands of ammo including Hornady, Federal, and Winchester, the CZ performed well. Even better, having such a large capacity of 19+1 meant I spent more time shooting and less time changing mags — which was really nice. 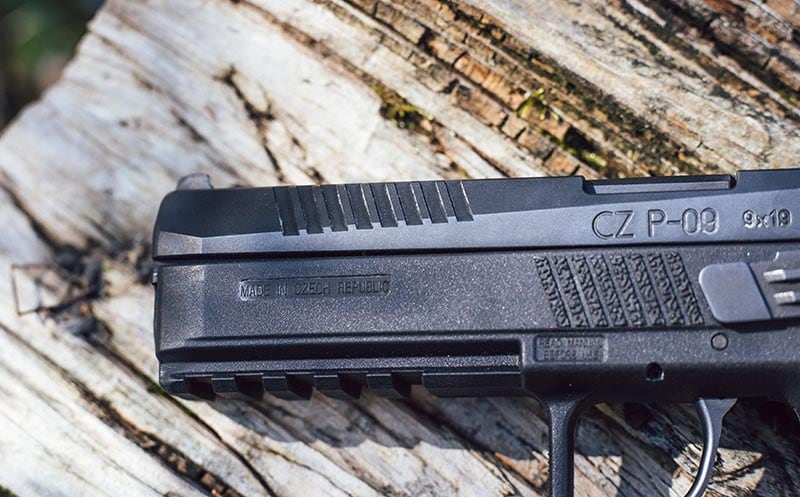 Though there are serrations on the slide for better gripping, I still found the slide to be rather heavy. (Photo: Jacki Billings/Guns.com)

The only major issue I encountered came down to the rather heavy slide. I found it slightly difficult to manipulate but worked through it. If you’re someone with arthritis or an injury that leaves you with little hand strength, however, you might want to forgo the P-09 as you’ll likely find it frustrating.

Slide aside, the CZ P-09 offered a pleasant shooting experience and manageable recoil. 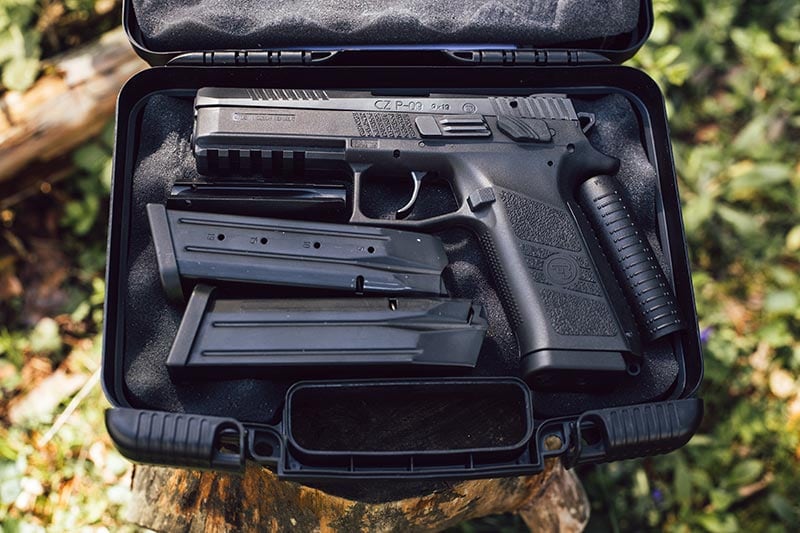 Where does the CZ P-09 fit on the scale of use? While some might be able to carry the full-sized gun, it was too big for me to pull off; but I could easily integrate this pistol into a home defense plan. With 19+1 rounds, it’s a no-brainer to keep this bad boy in a quick-access safe by the bed.

Retailing for around $499, the CZ P-09 is a nice polymer upgrade, holding to the CZ name. If this one catches your fancy, check out our full inventory of P-09 pistols as well as other CZ offerings on Guns.com by clicking the button below.