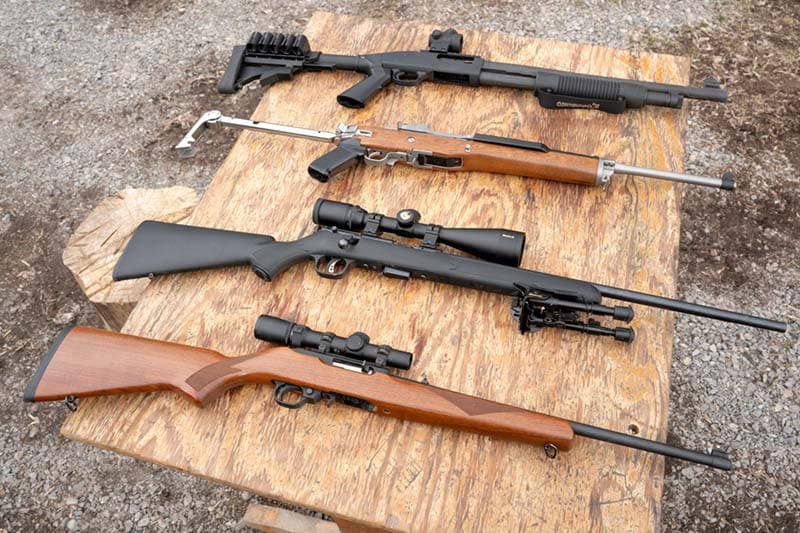 A collection of guns including a Ruger Mini-14 which is banned in Canada as of May 1, 2020, and a Mossberg 500 series 12-gauge shotgun, top, which could be banned as well. (Photo: Ben Philippi/Guns.com)

On Wednesday, the Canadian Coalition for Firearms Rights (CCFR) officially launched a charter challenge of the government’s ban on “military-style assault weapons.”

The Liberals rushed the ban with an order-in-council from the cabinet, not through legislation. The group believes the ban is a wrongful deprivation of liberty arising from an improper exercise of legislative power.

They refer to section 7 of the Canadian Charter of Rights and Freedoms that states, “Everyone has the right to life, liberty and security of the person and the right not to be deprived thereof except in accordance with the principles of fundamental justice.”

“The government, in an entirely arbitrary and irrational way, has created legislation that will deprive us of our property and our freedom to live as we wish, on pains of incarceration for failing to comply,” said Rod Giltaca, CEO and executive director of the CCFR.

The CCFR has attained a lawyer who specializes in such challenges and acknowledges that it will be an uphill battle.

Opposition to the ban has been fierce. On May 5, a Canadian parliamentary online e-petition against the gun ban collected the most signatures in the shortest amount of time in Canadian history. Sponsored by Conservative MP Michelle Rempel Garner who tweeted, “Our petition to stop the Liberal confiscation plan that does nothing to stop the illegal use or importation of firearms has surpassed 100k signatures in just over 24 hours.”

Meanwhile, on May 4, the Canadian Sports Shooting Association concluded that if you removed the choke on certain 12-gauge shotguns, the bore diameter could be larger than 20mm. This meant that 12- and 10-gauge shotguns could be included in the ban that prohibits firearms with a bore diameter of 20mm or greater.

The CSSA-CILA made its findings public through an online legal document warning Canadian gun retailers and owners to stop selling, transporting, importing or using 10- and 12-gauge shotguns. This caused chaos and confusion among Canadian gun owners, especially hunters. There are an estimated 2 million shotguns in Canada and many hunters in the far north depend on them to sustain.

Canada’s public Safety Minister Bill Blair tried to calm the situation by tweeting, “Earlier today, the CSSA-CILA issued a statement alleging that our government is banning 12- and 10- gauge shotguns. This is absolutely incorrect and we will be reaching out to them to correct their misunderstanding.”

This did not ease tensions, however.

“We are not satisfied with a tweet from the minister that everything is OK as the basis for our whole industry’s future,” Alison de Groot, the managing director of the CSSA told CBC.  “There is lots of precedent in [Canadian] law and technical language in legal government documents our industry uses every day that conflicts with this tweeted response.”