Big Bore Enthusiasts Weigh in on their Favorite Large Calibers 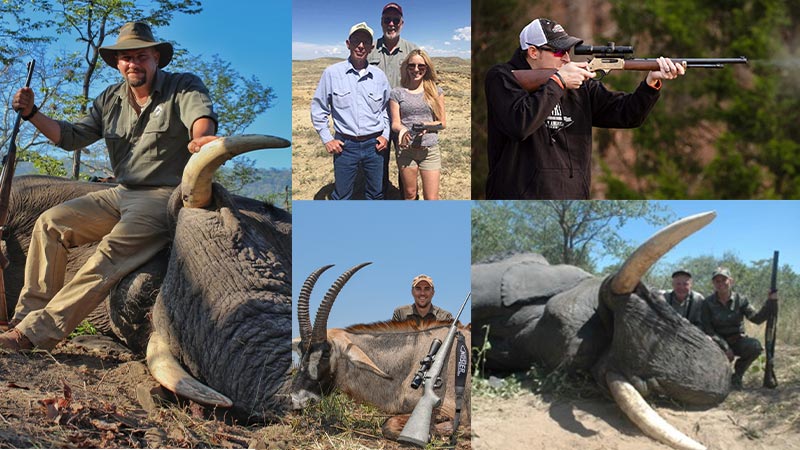 We caught up with a handful of hunters to learn about their favorite big bore cartridges. (Graphic: Guns.com)

For those who’ve harnessed the power of the big bores, there’s no going back. One thing is certain– “big bore” means different things to folks. Guns.com looks at some of the top choices from historical figures as well as modern shooters.

A Trip Down Memory Lane 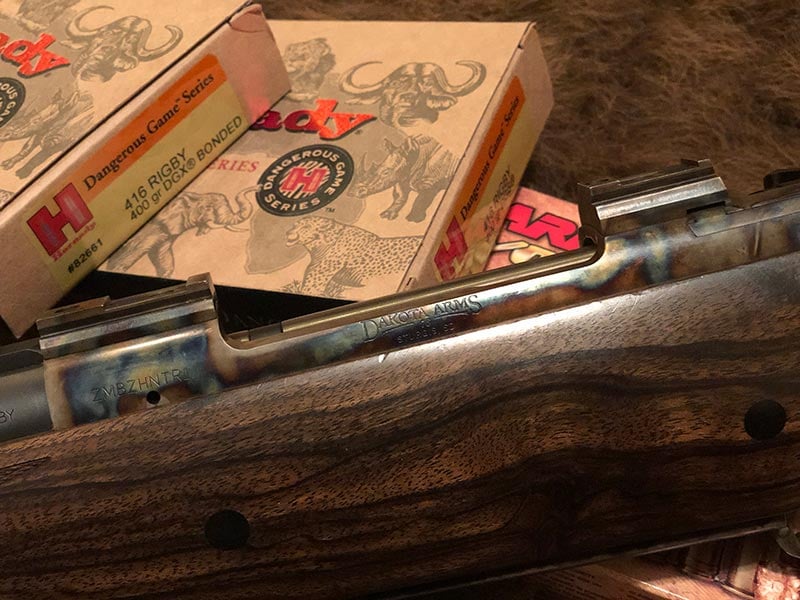 To begin, let’s look at the wide variety of choices from a handful of the most well-known African hunters of yesteryear. Walter Dalrymple Maitland Bell, better known as Karamojo Bell, hunted elephants in remote, warring Africa with the .275 Rigby.

Lt. Col. John Henry Patterson, famed for killing the lions of Tsavo, wrote “the battery, to be sufficient for all needs, should consist of a .450 Express, a .303 sporting rifle, and a 12-bore shotgun.”
Ernest Hemingway’s Westley Richards chambered for .577 Nitro Express took lion, rhino, and buffalo on the Dark Continent.

Of most recent fame, the late US Marine Corps Gunnery Sergeant turned actor R. Lee “Gunny” Ermey, bagged numerous dangerous game animals on than one safari with his Dakota Arms Model 76. The gun was custom built and serial numbered to him as ZMBZHNTR1, chambered in .416 Rigby.

Check out the top selections in both big bore chamberings and firearms from some of today’s most respected shooters, hunters, gun builders, and outdoor celebs. 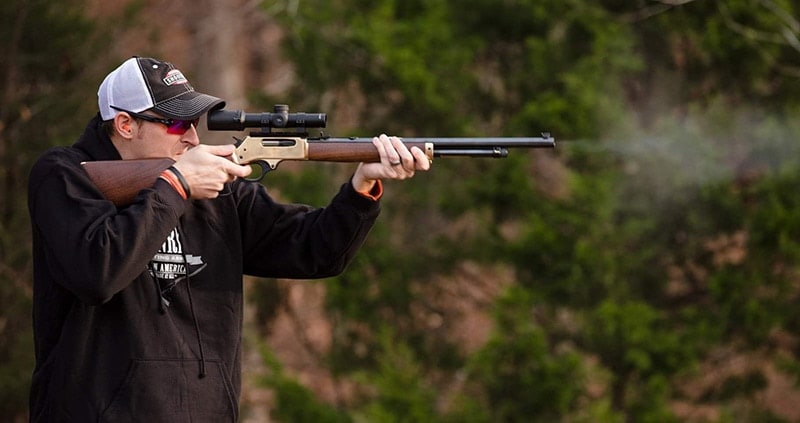 “I would have to go with the tried and true 45-70 Govt. The cartridge has been around for nearly 150 years and is still just as relevant today. Nothing says ‘America’ more than a classic Henry Repeating Arms rifle chambered in 45-70 Govt.”

“My favorite big bore is the .450/400 Nitro Express, 3-inch same as the .400 Jeffrey. I’ve taken elephant, giraffe, Cape Buffalo, and numerous other animals with that round. The Cape Buffalo was harvested with a single shot Ruger No. 1 in 450/400 and the others with my Heym double rifle. That round really gets the job done. The recoil is, in my opinion, very reasonable and mild considering the caliber. It’s a great cartridge and all-around big-bore caliber.” 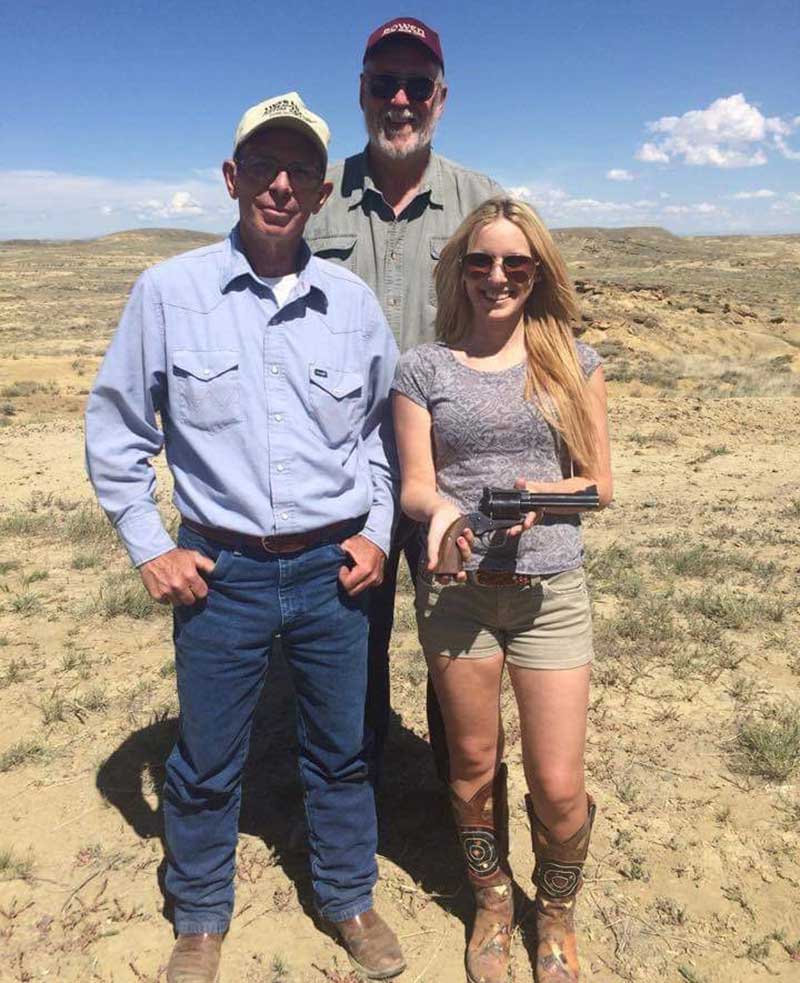 “Although I haven’t been hunting with this caliber yet, one of my favorite big bore cartridges is the .500 Linebaugh. I first got to shoot that caliber at one of John Linebaugh’s annual matches in Cody, Wyoming, and I was surprised at how well I did with it, despite the fact that I have bad wrists from many surgeries.”

“When it comes to dangerous game hunting, each hunter has their own preference regarding caliber, but the most versatile is definitely the .375 H&H. I have hunted many buffalos with a .375 H&H, but before I carry on, I must say the best rifle must be one that the shooter can handle and shoot well. Period…because I’m a Big 5 Dangerous Game hunter and did much research on the subject, I ended up with a .450 Rigby. For the record, I also have a .416 but I will go to war with my .450 Rigby. I have been in a few close encounters with charging buffalo, and I know for a fact the .450 Rigby has excellent stopping power.” 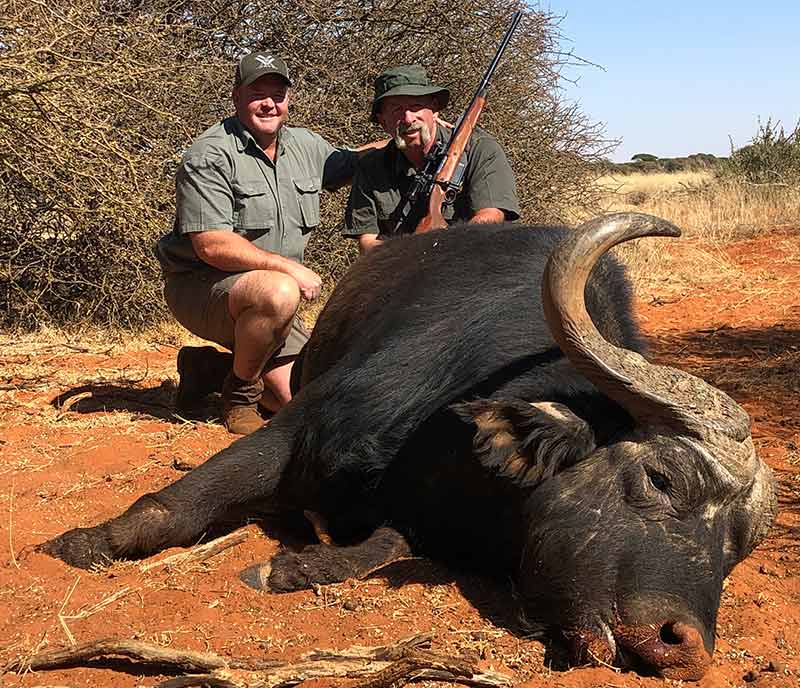 “I have many favored big-bore cartridges, but if I had to make a single choice, my choice would be the old but still relevant 45-70 Govt. There is nothing on the North American continent that I wouldn’t feel comfortable hunting with this historical cartridge and on more than one occasion in both black powder and smokeless firearms it has brought home clean meat from the forest to the dinner table.” 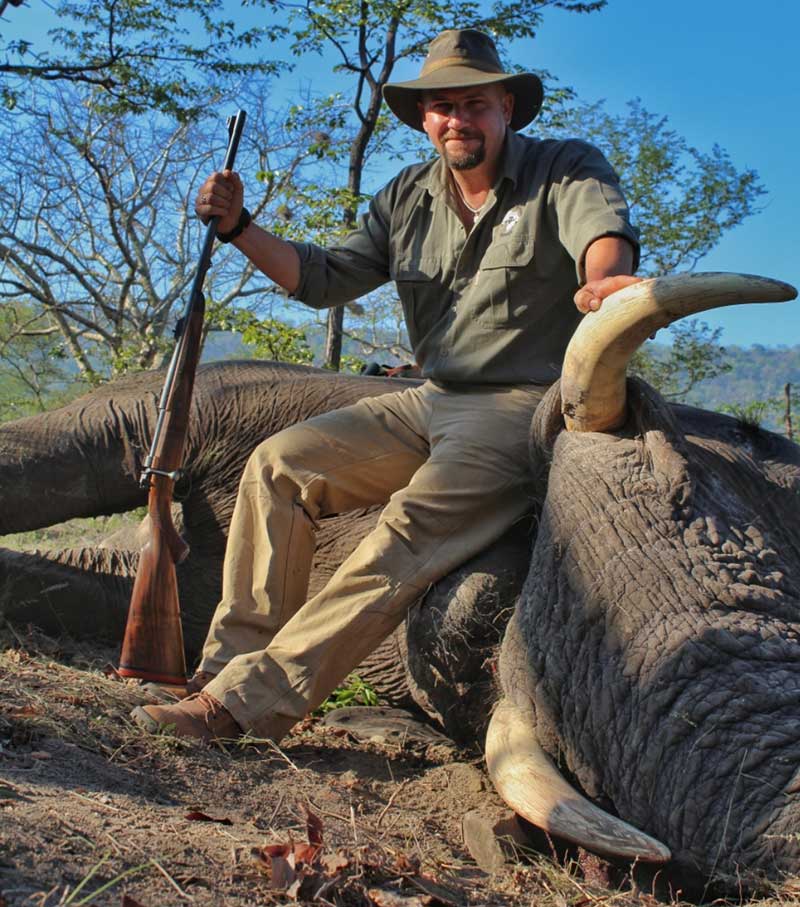 Phil Massaro with his Zimbabwean bull elephant, harvested with the Heym Express by Martini in .404 Jeffery. (Photo: Massaro Media Group)

“[Whenever] I’m (tragically) forced to choose just one rifle/cartridge combination for dangerous game, it would undoubtedly be the Heym Express by Martini in .404 Jeffery. The gun is rock-solid, and the cartridge does it all, with flair and class.” 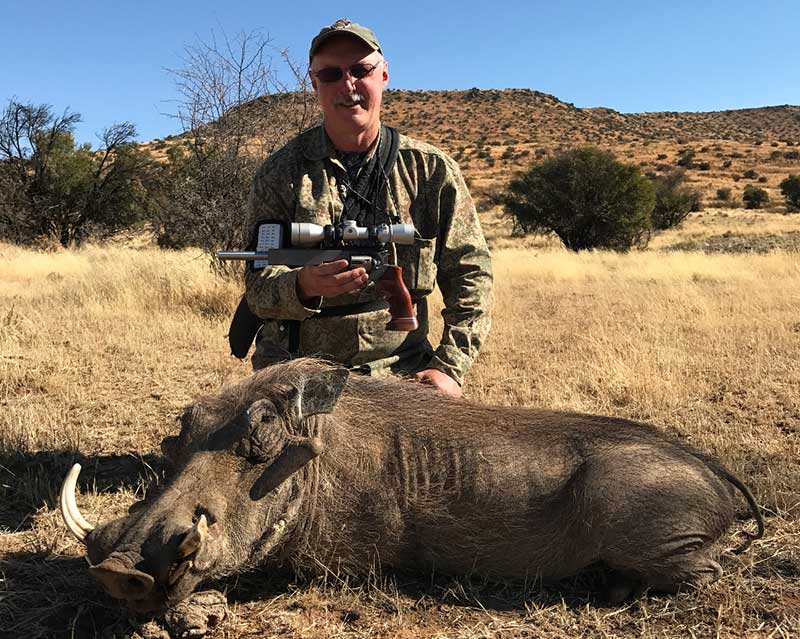 “I’d take the .454 Casull in a revolver for dangerous game. I can manage the recoil well enough to practice as much as I should with this cartridge. In a specialty pistol, I’d go with my custom center-grip XP-100 chambered in 33 Nosler. If I was hunting dangerous game with a rifle, I’d have to choose the .375 H&H.”

“The .30-06 Spfld has been around long enough to be loaded for just about any game you’d like to hunt, with selections of powder and bullet weight. Plus, you’ll find it in stock most anywhere ammo is sold. I’d make it the top choice for everything up to African dangerous game. At that point, you’re going to need a very large and approved cartridge and the shoulder to back up the shot.”

“That’s an easy choice. The .300 Win Mag wins, hands down. There are so many options for ammo and bullets for the handloaders, from 125- to 220-grain. The .300 Win Mag has enough punch to anchor most everything on the planet. You can choose a flatter shooting round or buy a heavy-bullet round for most animals a person would encounter.” 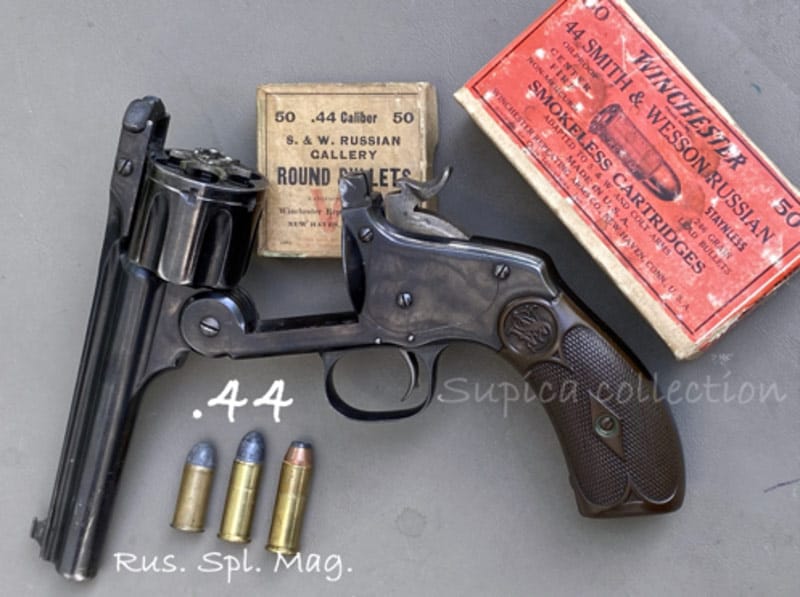 “I’d have to say the .44 S&W Russian. I’m an old guy. I like smoke & noise, but I don’t like hurting my hand and I don’t like hurting my ears. The .44 Russ is a joy to shoot, the most accurate centerfire handgun cartridge of the late 19th century, and the preferred round of my all-time favorite gun — the S&W New Model Number 3. Plus, it’s the granddad of the .44 Magnum, if that counts for anything.”

“Even though it’s not a true ‘big bore’ by most folks’ standards, I love my .270 Win. It’s flat shooting, has light recoil, and is a great all-around gun. Plus, my Remington Model 700 BDL was a gift from my mother. When the .270 just isn’t enough, I also love my .300 Win Mag, which covers any game animal that I want to pursue.” 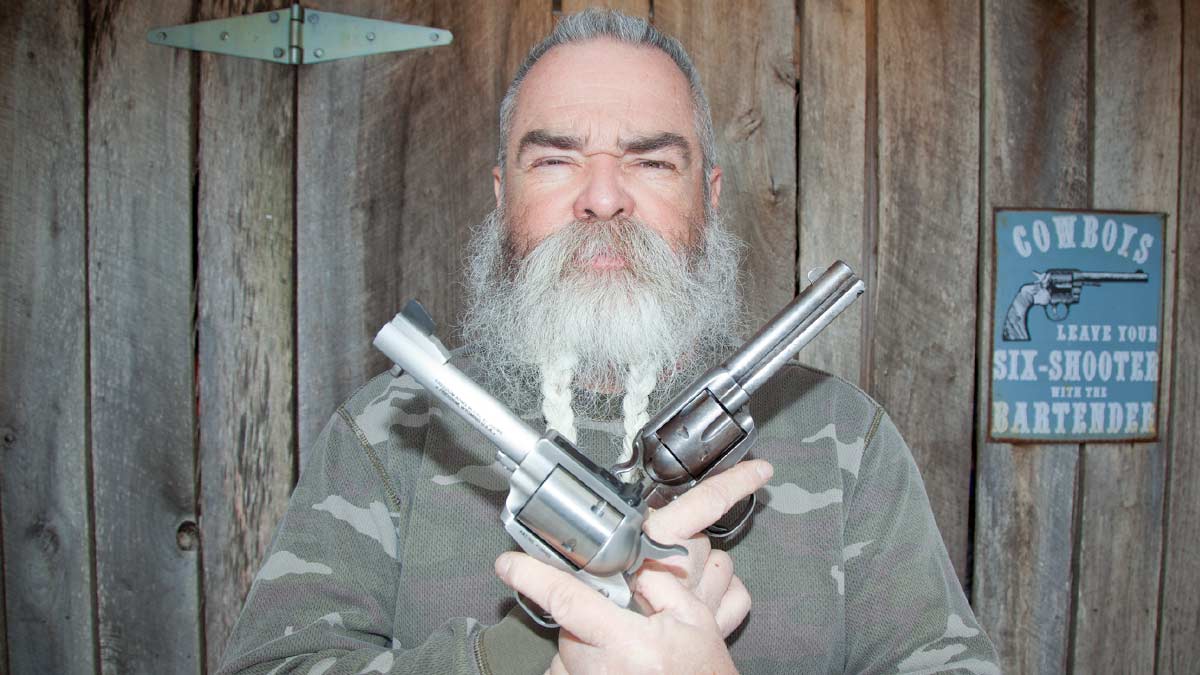 “My choice would be the .45-70 Govt cartridge, loaded hot with ammo from Buffalo Bore, Double Tap, Garrett, or some healthy handloads– in a slick lever-gun from Marlin or Henry. Such a rifle would be topped with a quality low-powered variable scope from Trijicon, Skinner, or Leupold. This rifle-scope-cartridge combo is capable of taking any game on Earth, as well as whatever roams other planets. Big, heavy bullets penetrate deeply and crush large bones reliable, and a handy lever-action rifle can deliver those bullets on target repeatedly and rapidly. The cartridge has been proven in the field for over 140 years. It is truly a classic and shows no signs of ever becoming obsolete.”

“Hands-down, if I was forced to sell all of my rifles but one, I would keep the CZ 550 in .375 H&H for several reasons…I love that it is versatile between smaller game and large dangerous animals. My future goal is to couple the cartridge with the most aerodynamic projectile possible and see what kind of long-distance effective range I can get out of it. I just bought a 280-acre ranch in Idaho and I might get an opportunity at a distance shot on antelope.” 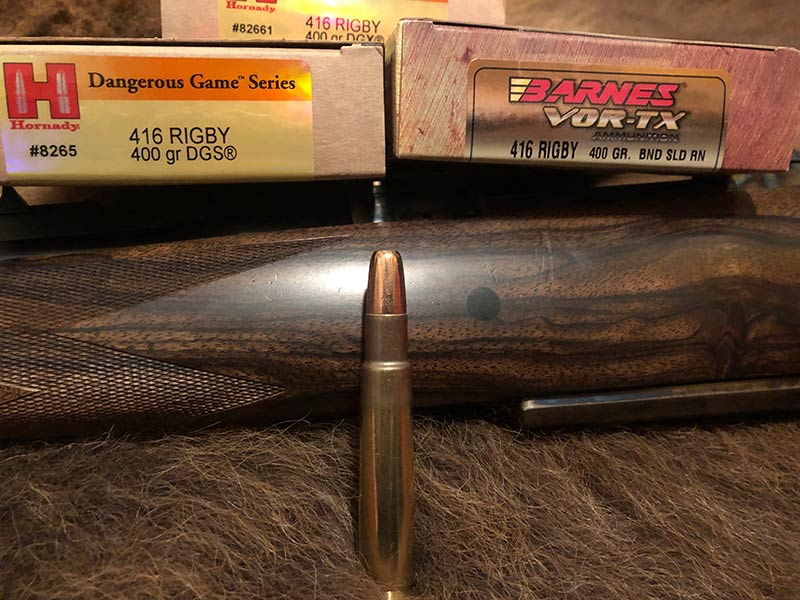 The .416 Rigby is a common choice for hunting dangerous game. (Photo: Kristin Alberts/Guns.com) 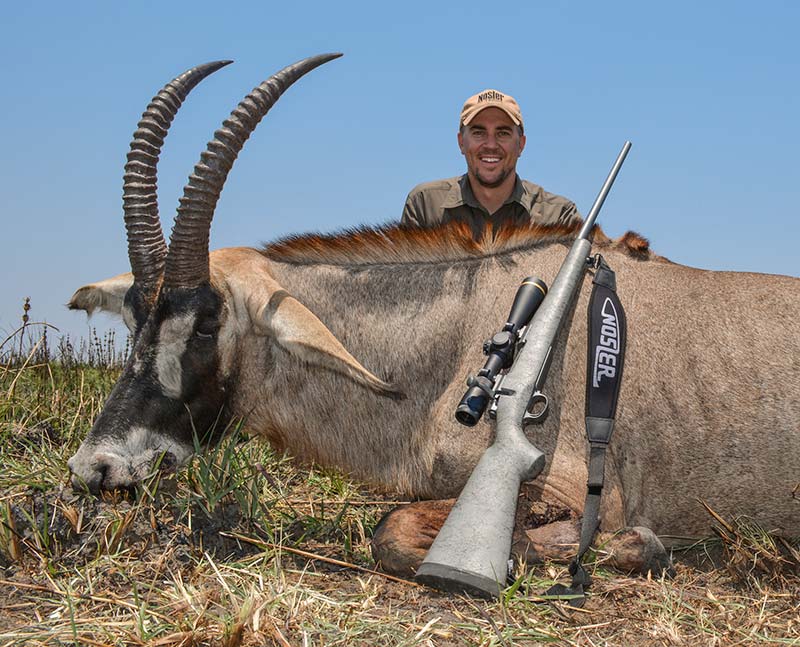 John Nosler and the 33 Nosler rifle he used to harvest this trophy Roan in Africa. (Photo: John Nosler)

“If I am dropped anywhere in the world with one cartridge, it better be a 33 Nosler loaded with a 250-grain Nosler Partition. This beast of a round is capable of taking anything on the planet and I feel confident behind the trigger.” 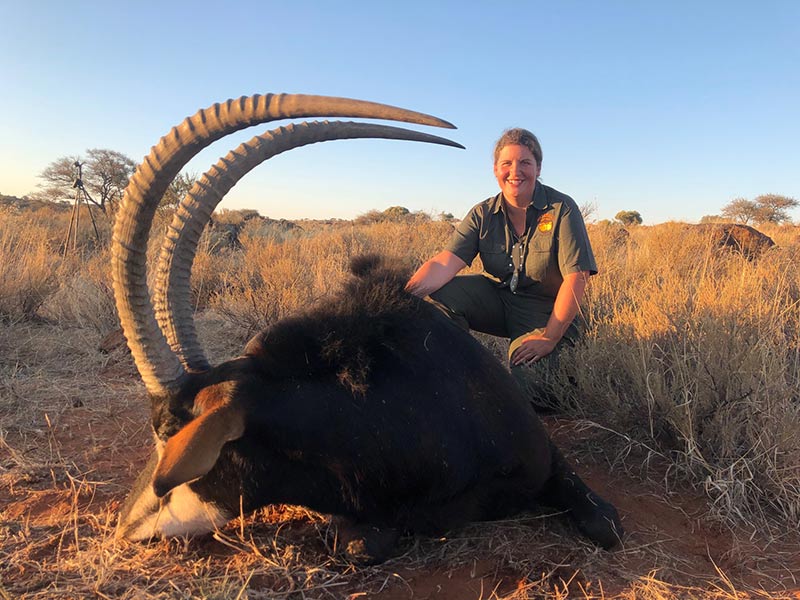 “I’m fairly new to hunting dangerous game, but I’ve settled on two must-have rifles and chamberings. The first is a .416 Rigby in the Dakota Model 76, which will take down the biggest of the big. The second is a .375 H&H in a CZ 550, which might just be the best do-all cartridge, with bullet weights from 250-grain tipped to 350-grain soft nose. If I’m hunting big game with a handgun, I’ll have my Magnum Research BFR chambered in .375 Winchester. Recoil is manageable, and the knockdown power is certain.”