Low Prices on Handguns in the Warehouse Clearance Sale

Guns.com is offering amazing deals on certified used guns from the warehouse as we clear out more space for new guns. Save hundreds of dollars instantly on a wide variety of handguns, rifles, and shotguns! Below are just some of the beautiful handguns for sale. 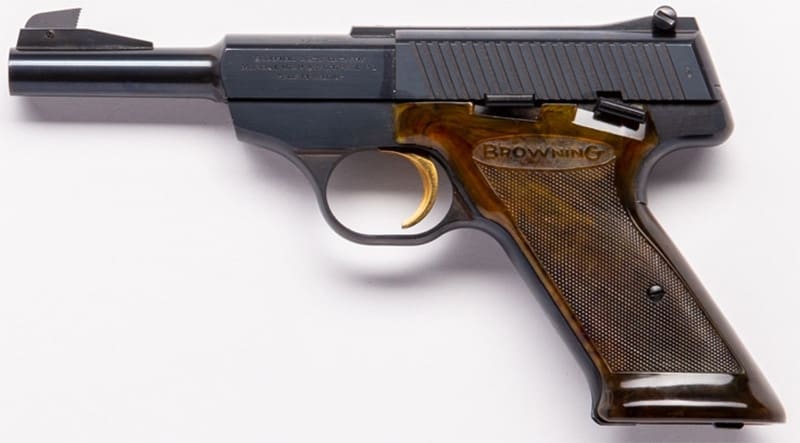 The Browning Challenger was created to compete with the Ruger Mark II pistol — a pistol that was dominating the .22 LR semi-automatic scene in the 1960s. Recreational shooters loved the Mark II for its fun plinking, low recoil, and inexpensive ammunition. Browning decided to meet the Mark II head-on with its own take on a fun .22 LR by way of the Browning Challenger. Challengers were produced from 1962 to 1985.

This particular Challenger in the Guns.com Vault is a first-generation which makes it collectible, but it’s not so valuable that you can’t take it out and shoot it. It was made in 1974 at the FN Belgium plant and has rare plastic grips only produced for one year. This model is in excellent overall condition.

Check out our look at the Browning Challenger III in the video below. 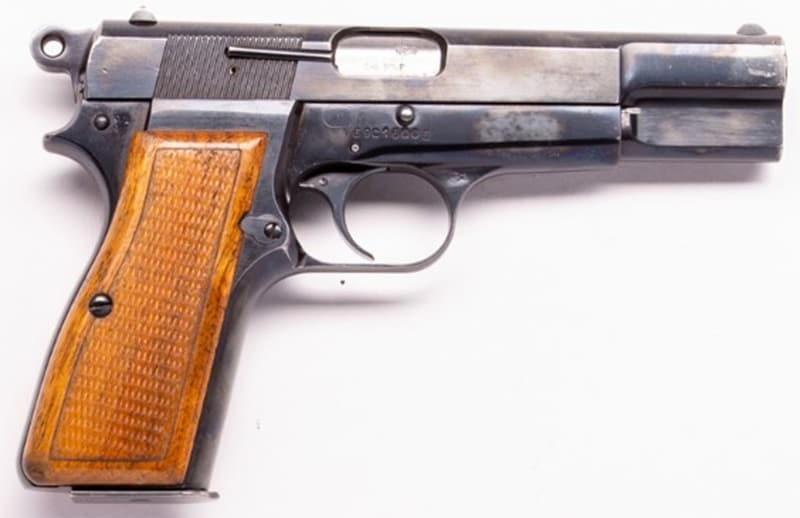 Little introduction is needed for the iconic Browning Hi-Power. It was designed by one of the most famous gun designers in the world, John Moses Browning. Sadly, it was to be his final design. He passed away in 1927 at the age of 71 in his workshop in Belgium before the gun went into production.

When it officially appeared in 1935, it was a game-changer.  A single-action, semi-automatic pistol chambered in 9mm, it was strong, simple, accurate, and reliable. Using a staggered magazine, it was capable of holding 13-rounds and all that firepower made it very popular during World War II.

In fact, when Germany invaded Belgium in 1940, they took over the FN factory and started producing Hi-Powers for themselves. However, one of FN’s engineers fled to the West, helping produce Hi-Powers in Canada for Allied use. As a result, the pistol saw combat on both sides of the war.

The example shown has a “69C” serial number prefix with an external extractor and was produced at the FN factory in Herstal, Belgium in 1969. It is in very good condition and has checkered wood grips.

For more information about Hi-Power pistols, check out our video below, which includes the same C-series gun as showcased above. 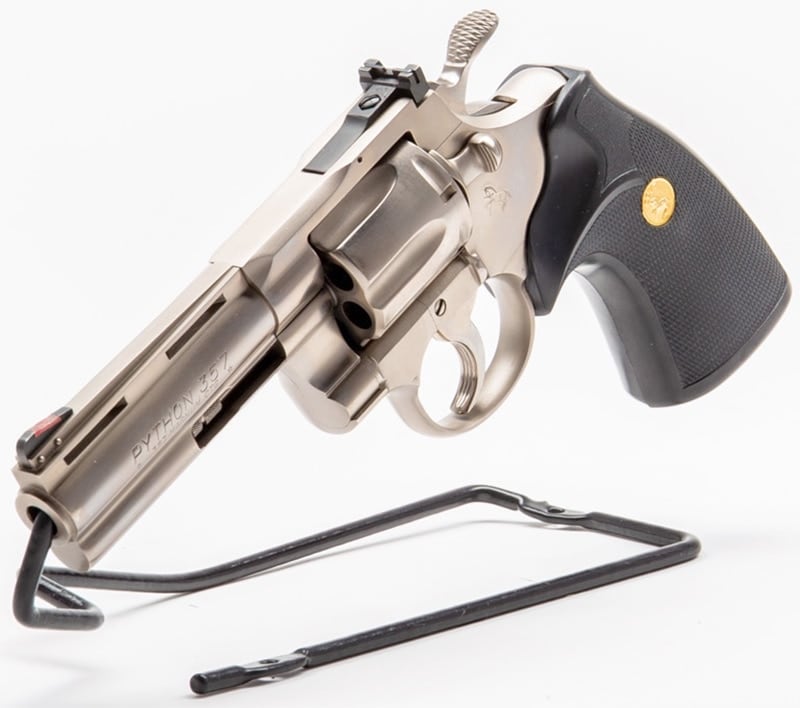 Introduced in 1955, the Colt Python was intended to be a premium revolver chambered in .357 Magnum. Many argue that it is one of the greatest production revolvers ever made. Although Colt stopped making them in 1999, they’re back by popular demand, relaunched earlier this year at SHOT Show.

From the distinctive look of the vented rib on top of the barrel and full-lug under it to the excellent target sights and buttery smooth trigger, the old school Pythons are revered in the wheel gun world. In fact, they were preferred among monarchs in Europe and the Middle East.

While Colt produced the vaunted “I” frame premium revolver in a special grade of blued and nickel finishes before offering stainless models in the mid-1980s, this particular Python comes in a rare but very desirable factory satin nickel.

The serial number, K56372, points to a 1981 production date and it comes with factory Colt Pachymar Gripper medallion combat grips. The cylinder holds 6-rounds and the barrel is 4-inches in length. Weight is a hefty 46-ounces and it is in excellent condition. If you want a gun that oozes old school sexiness, this is it. 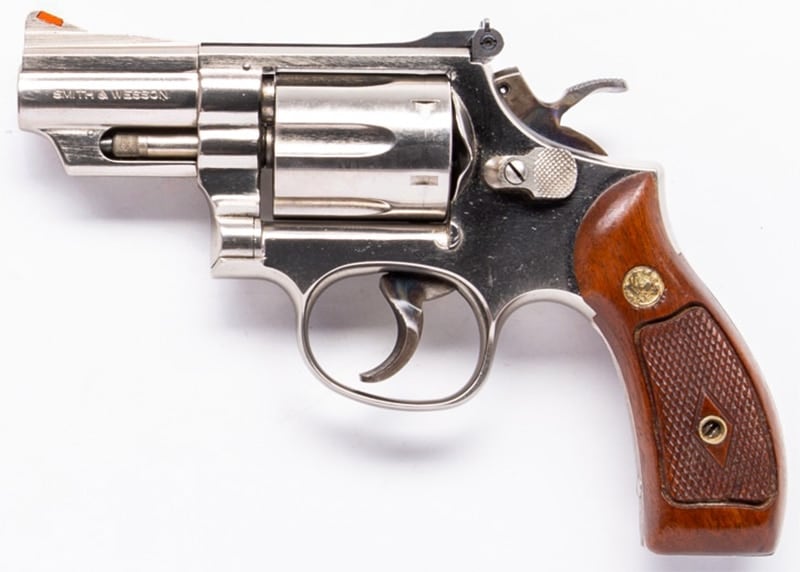 Smith & Wesson has been in the revolver business since 1856, but it wasn’t until the company collaborated with WWII and Korean War veteran, Marine officer, and U.S. Border Patrol supervisor William “Bill” Jordan in the 1950s, that the gunmaker would create what many consider to be the perfect combat duty revolver.

In 1957, the S&W Model 19 was released, based on a K-frame sized double-action revolver firing the .357 Magnum. It was the gold standard for legions of lawmen of the age and was issued to both the Border Patrol and the Federal Bureau of Investigation before those agencies ultimately shifted to semi-autos in the 1990s. After a 40-year run, the Model 19 went out of production, but, fortunately, there’s quite a few still kicking around.

This carry or backup gun holds six rounds of .357 Magnum/.38 Special. It features a 2-inch barrel topped with an adjustable rear sight and a ramp front sight. The grips on this gem of a gun are checkered wood and the finish is stainless steel. 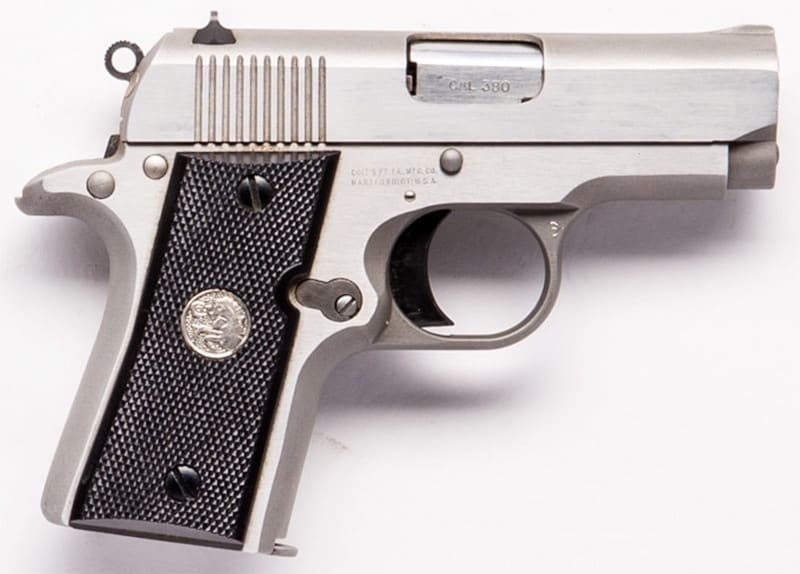 If you’re looking for one of the most compact carry guns available, the Colt Mustang is about as good as it gets. Smaller than the SIG P365, it fires the less powerful .380 ACP round; however, with current advances in ballistics and bullet technology, the .380 is still quite capable.

First time concealed carriers may also appreciate the external manual safety on the Mustang. With a 6+1 round capacity, the Mustang also acts as a decent backup gun. With an overall length of 5.5 inches, the Mustang’s barrel measures 2.75-inches and has a loaded weight of around 13-ounces. The Mustang is a solid contender in the concealed carry market.

For more information about just how compact the Mustang is, check out our video below.