USPSA Multi-Gun Nationals is one of the biggest and most competitive 3-Gun competitions each year. Originally slated for March 2020, the event was moved to June 2020 due to COVID-19. The reschedule made the competition the first major 3-Gun match and as such competitors were ready to shake off the dust and test their skills. What better way to kick off the competitive shooting season than Nationals?

What is Multi-Gun Nationals

Multi-Gun Nationals spans two days, featuring 12 stages and offering unique challenges not commonly seen at local matches. At a local event, there might be one or two stage plans that make sense, while at Nationals the complexity of stages offered various stage plans. In this match, almost every member of a squad had a different plan for stages, all yielding competitive times. This made it incredibly fun! It truly became a mental match.

Stage one was the most talked about. Competitors started on a platform aiming at targets starting at 350 yards out to 650 yards. The kicker here was two paper targets sitting at 400 yards. Paper targets mean there’s no ringing, like you get with steel, indicating a hit. You just hope your hits are on.

There were jungle runs with shotguns and even a stage where competitors used their strong hand to throw a clay before shooting it. Each stage was different and challenged shooters throughout the match with every platform — shotgun, pistol, and rifle.

It’s All in the Vibes

The vibe of the match was amazing with a diversity of shooters including women, juniors, beginners, and professionals. While there’s always pressure to perform well, there’s also a large sense of community. Simply put, 3-gunners are family. 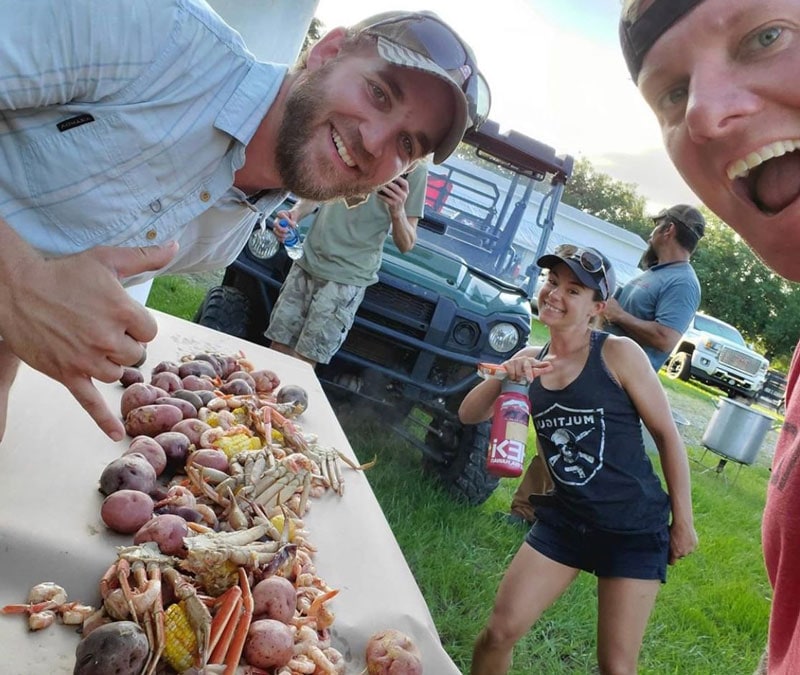 Good times and good eats when you work the match. (Photo: Taylor Thorne/Guns.com)

Over four days, starting with the pre-match for staff and the main match for general competitors, people work or shoot all day. They gather at the end to enjoy a cold Yingling, stories, and laughter. Something tasty is always being cooked where the campers are parked. From a seafood boil to a steak smorgasbord, we filled up on food, reconnected with old friends, and made new ones. Often in shooting competitions, we compete, go home, and don’t see one another until the next one. To come together as friends strengthen the shooting community and make for a great time.

My Results and Lessons Learned

How did I place, you wonder? I disqualified on stage 12 as I transitioned from a prone position. Getting up to run from the right rear of the stage to the left, I broke the 180 Rule with my rifle. The 180 Rule, in its simplest form, imagines the competitor standing in the center of a circle facing downrange or north. Behind the shooter would be south at 180 degrees. As long as the muzzle of the gun stays north, facing downrange, everything is good. If the firearm breaks 90 degrees east or west, it’s a disqualification. Stage 12 saw the fault lines positioned to face the two side berms versus the back berm and as a right-handed shooter, I should have planned my movements better.

A DQ shouldn’t happen, but it’s part of the shooting sports — typically, in every match just under 10 percent of shooters get disqualified. As many say, it’s not if you will get DQ’d, it’s when.

It’s easy to slip into a negative mindset after a DQ or subpar performance. At the end of the day, though, you have to remain professional. Own mistakes, learn from them and overcome. Attitude is everything! After my DQ, I had to step away, take a deep breath, and absorb what happened. Once I calmed down, I set my sights on the next task, pushing on. I went back to my squad and helped them run shooters and reset for the remainder of the day. Just because you’re out of the competition, doesn’t take away from the fact that your squad is still in it.

We are a community and as a member, it’s your job to help others. People won’t remember who won the match two years from now, but they will remember a squadmate who was bitter and had a bad attitude. When you have a poor performance but maintain a great attitude, you earn respect from your peers.

Overall, Multi-Gun Nationals was an amazing experience. The competition season is now in full swing and I, along with others, can’t wait for the next big competition!

Congratulations to the 2020 Multi-Gun National Champions: