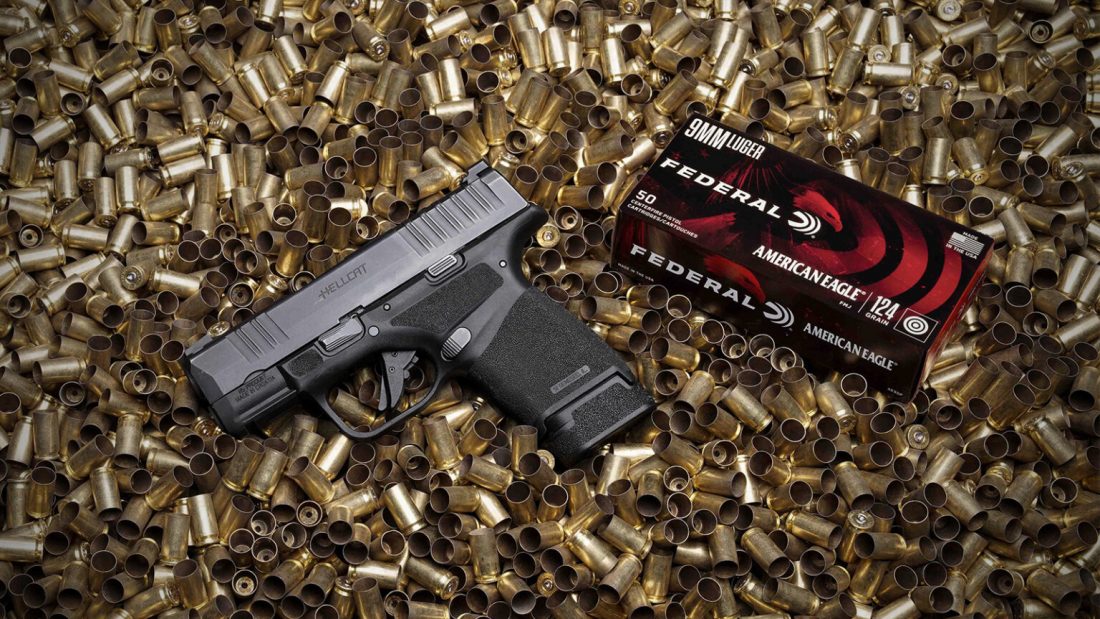 Springfield Armory’s new Hellcat  micro-compact 9mm pistol is apparently a beast, as one has surpassed the 20K mark in testing.

The Hellcat in question, serial AT234795, was pushed through the final 10,000 rounds by Paul Carlson, owner of Safety Solutions Academy, with the support of a team of four extra shooters, a pile of 124-grain American Eagle red box FMJ from Federal, and Action Target. The crazy thing is that said pallet of parabellum was cycled through the T&E Hellcat in a single 10-hour period, documented shot-by-shot at the Armory Life. The condensed video of the test is below.

The process included rapidly firing the Hellcat for 250 rounds consecutively, then cooling it with an air compressor for five minutes between strings. During Carlson’s run, they lubed the gun every 500 rounds.

“The gun was field-stripped and I made sure to wipe the crud off of the breech face, rails, barrel, etc,” said Carlson. “I used Breakthrough Clean High Purity Oil to lube the rear of the rails, barrel, and barrel hood, and then gave the Hellcat 10 or so dry racks to distribute the lube per the directions in the Hellcat’s owner’s manual.”

At every 2,500 rounds, they replaced the recoil spring as recommended by Springfield.

When it comes to reliability, the team incredibly reported no issues.

“We had no parts breakage or stoppages that were the fault of the pistol — or the Federal ammo,” said Carlson, going on to explain that, “We did have a few incidences where a shooter inadvertently pressed up or down on the slide lock lever and either locked the gun open with rounds in the magazine or prevented the slide from locking back on an empty magazine.”

This is on top of the same gun that Clay Martin ran 10,000 rounds through already last winter. In a similar format, Martin used supplied Federal ammo– 115-grain American Eagle– re-lubed the gun every 250 rounds and cleaned it every 1,000. Likewise, Martin swapped out the recoil spring every 2,500 rounds.

Below is the documentation of Martin’s first 10,000 rounds, for reference, in an epic two-hour run.

“No one would ever expect a micro-sized pistol intended for CCW to be subjected to such an incredibly demanding test, but we never doubted the Hellcat would come out on top,” says Dennis Reese, CEO of Springfield Armory. “Quality is our number one priority and it always will be, and the Hellcat proved that during this test. We’ll be watching as it continues to prove itself for the next 10K rounds, and beyond.”

Guns.com’s very own Jacki Billings has been reviewing a Hellcat on her own across the past several weeks. Check out her thoughts on the platform, below.