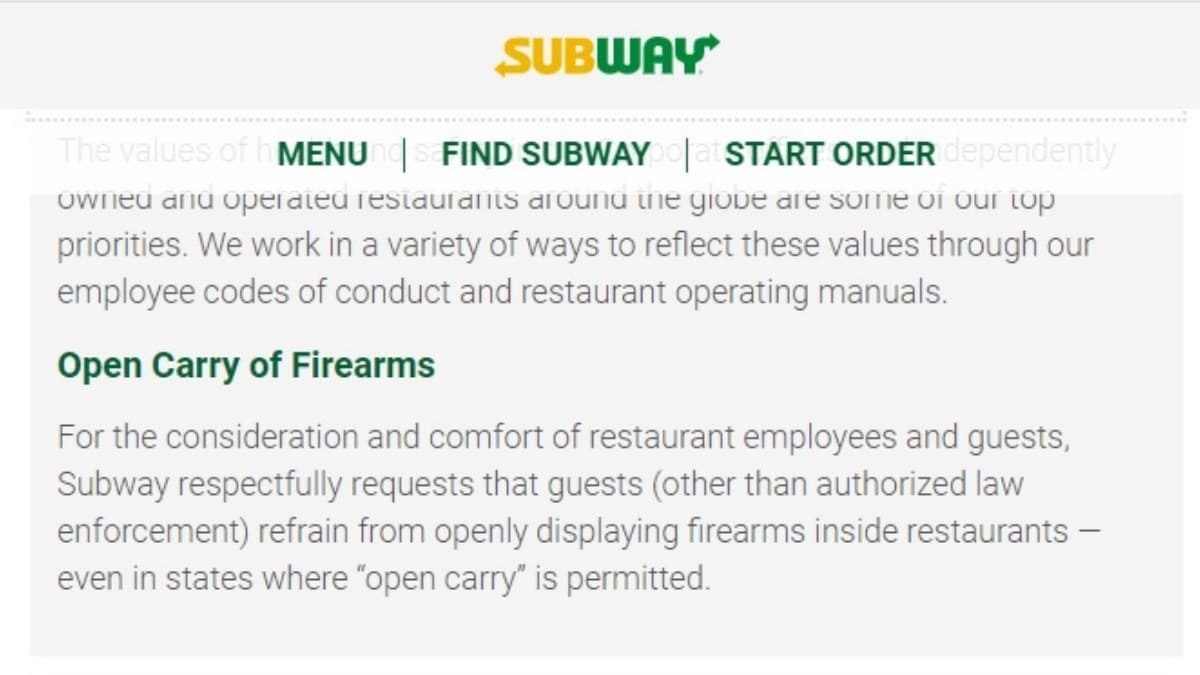 Subway subtly changed their policy  to include a request that “guests (other than authorized law enforcement) refrain from openly displaying firearms inside restaurants — even in states where ‘open carry’ is permitted.”

A loose coalition of gun control groups cried victory with a full-throated roar on Tuesday, claiming that Subway banned open carry due to their efforts.

Sparked by images of individuals openly carrying firearms and an inert AT-4 anti-armor weapon in a North Carolina Subway restaurant in May, a number of small anti-gun organizations to include the Newtown Action Alliance and Guns Down America called on the sandwich chain to ban the practice.

Falling somewhat short of a prohibition, Subway subtly changed their social responsibility policy to include a request that “guests (other than authorized law enforcement) refrain from openly displaying firearms inside restaurants — even in states where ‘open carry’ is permitted.”

This led to ecstatic statements from the gun control groups involved, who had applied pressure on Subway through an online petition and a letter signed by two Democratic U.S. Senators in Connecticut who have previously signed on to just about every anti-gun proposal in the chamber for the past decade. The petition garnered 43,000 supporters or about 0.01 percent of the estimated U.S. population.

“I’m so proud of Subway for doing the right thing and working to keep their customers safe from the dangers of unnecessary guns in their restaurants,” said Alyssa Milano, Board Advisor of Newtown Action Alliance.

How is the change going to impact the company?

The National Shooting Sports Foundation pointed out this month on the issue, “Millions of Americans have become more concerned with their safety and the safety of the families leading them to vote with their wallets at the gun retail counter. Surveys have shown there are nearly 2.4 million new first-time firearm owners in America in the recent surge.”

As for the single-use AT-4 recoilless rifle, they are widely available for about $250 cash and carry without regulation. They make neat man-cave decor, but odds are no one is going to hold up a liquor store with one and, as the rockets that feed them are unobtainium, they are only mildly dangerous if used as a club. However, when billed as a “bazooka” or “rocket launcher” they always make big news when sold to police agencies during “buybacks,” often featured front and center as something of a Potemkin village tactic to show how well such controversial programs work.