Today’s handguns are lighter, faster, and more accurate and reliable than ever before. But one key improvement that stands out is the rise of red dot pistol sights.

Handguns have long required shooters to line up the front and rear sights as they press the trigger. It can leave a lot of room for errors. So today we will discuss the hot and competitive red dot sight options that are frequently replacing traditional iron sights.

I’ll be using the Canik TP9 Elite Combat to test three red dot sights. It’s a very accurate pistol with a cut slide that makes a perfect host for this trio of optics. We’ll run them through some tests and also look at them from a home defense and self-defense perspective.

US Optics has long been part of the optics game, but they are a relative newcomer to the electronic sight realm. As soon as I opened the box, I was impressed with their quality and presentation. But more important was the impression I got on the range.

I was a bit confused at first because the DRS 2.0 Enhanced did not appear to have a control to adjust the brightness. But in perhaps my favorite discovery of the whole project, I learned the DRS 2.0 is always on and automatically adjusts to ambient light. I was also happy to see it has a side-loaded battery compartment. This allows the user to change the battery without removing the sight.

As with the Vortex, the DRS 2.0 was easy to quickly zero, and I was back to banging targets in no time. 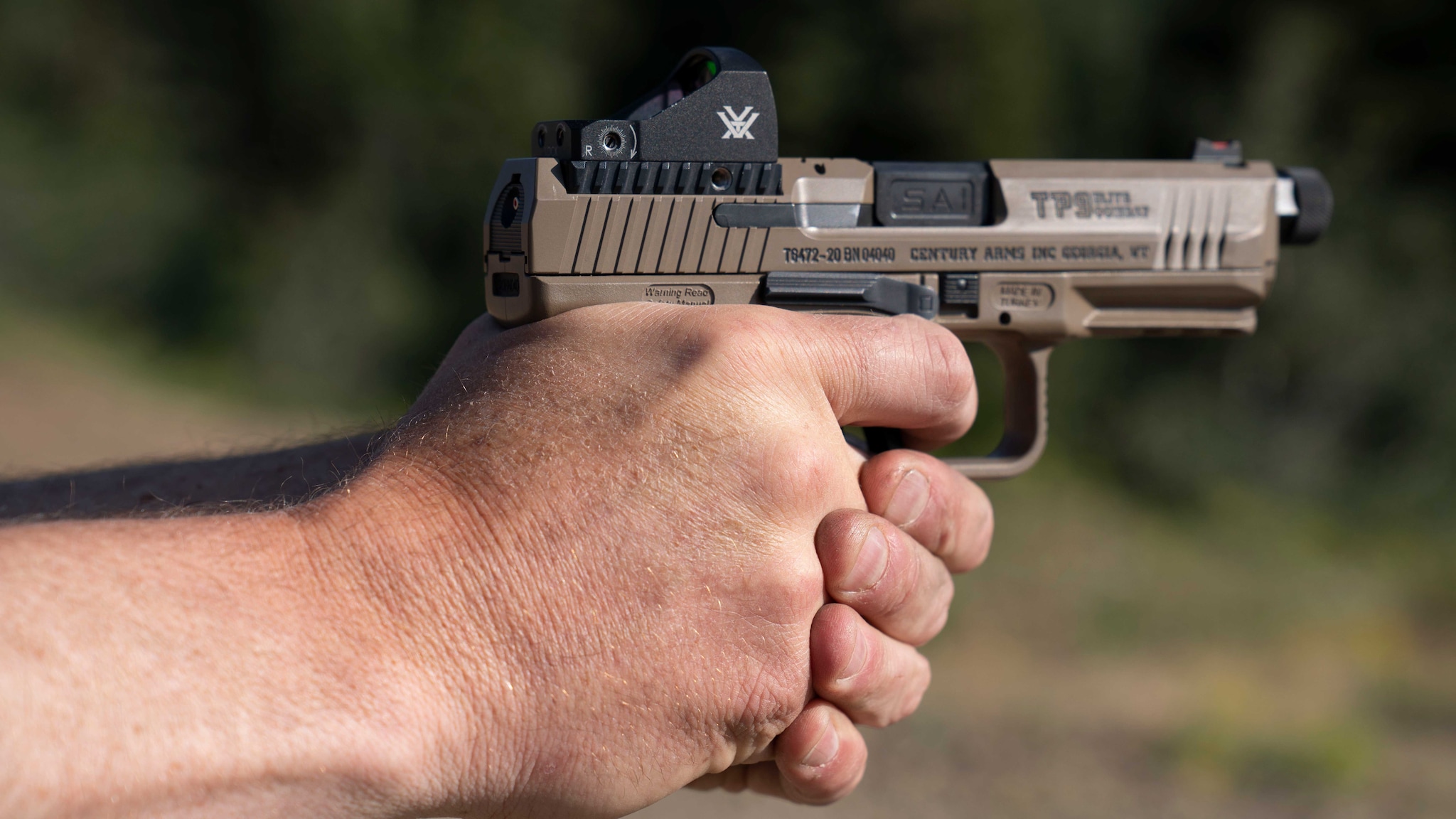 The Vortex Viper got me on target quickly with ease. (Photo: Jeff Wood/Guns.com)

With a well-known name like Vortex, I was sure I was going to like this optic. The tools provided made zeroing the optic a snap. I was blown away at how quickly I went from adjusting the zero to stacking a whole magazine into a small hole.

I was quickly in love with my Canik TP9 EC and Vortex Viper combo. I kept stacking shots and giggling. Shooting the pistol at distances much further than I was used to became quite easy. The accuracy of the pistol coupled with the precise and tiny dot made hitting my aim point as simple as breaking the trigger cleanly.

The Viper red dot optic utilizes a 6 Minute of Angle dot with 1 MOA adjustments. It has rubber-armored control buttons to adjust the brightness of the reticle and turn it on or off.

Riton is a relatively new company, but persistently bringing out more products. The X3 Tactix PRD red dot has armored up/down rubber buttons to adjust between six levels of brightness. It also has a four-hour automatic shutoff. It has a 3 MOA dot for some very precise shooting.

After I had it mounted, I noticed the X3 features a rear sight cut to use in the event your reticle goes out. This is something the other two lacked. While it’s not likely to be used often, it’s still a handy feature. The X3 also has a top-loaded battery, so you won’t need to remove the sight for battery changes.


All three red dots took a bit of getting used to because the reticle appears higher than normal iron sights. But once I grew accustomed to the hold and sight picture, I was addicted to it. When using iron sights, you must focus to some degree or another on the sights that are at arm’s length. Shooting with a red dot sight gives you a great advantage because you never have to take your eyes off the target.

If there’s a threat approaching you, simply bring the pistol into the plane between you and the threat. The glowing reticle naturally comes into place without ever having to change focus from the target. Obviously, after much practice and training, it becomes second nature.

I think a red dot sight could be a valuable asset for home security and self-defense. The bright red reticle makes aiming easier when tension is high. You can also shoot and transition between targets faster because you never have to take your eyes off a target. This would be especially helpful in a low light scenario.


I was surprised by this experience. After much shooting, I found the Riton X3 to be a preferred fit for my eyes. The sight picture of all three was more than satisfactory. They all got dirty and dusty just the same. But what really won this comparison for me was the reticle on the DRS 2.0 Enhanced. I never had to turn it on, or up or down.

Every time I drew my pistol from the holster, regardless of the time of day, the reticle was lit. Indoors and outside, it had nearly-perfect brightness. I only say "near-perfect" brightness because it occasionally might have been a smidge dimmer than I would have set it. But surely not enough to be a concern.

All three of these red dots are great pistol sights. I would feel very confident shooting any one of them in a competitive situation. I was a bit apprehensive about trading in my iron sights. But I'm happy to say I feel just as confident – if not more – with one of these three sights than the iron sights I always used.