What do you get when you have a pair of new 10mm longslide 1911-style pistols?  A head-to-head, that’s what.  There are far too many similarities in style, audience, features, and price not to consider the 6 inch Remington R1911 and Springfield TRP Operator arch enemies, not only in the tactical market, but the hunting pistol field as well.  Which one do you choose when you walk into that gun shop with a pocket full of cash?  Let Guns.com help you break the tie.

In order to choose the top gun of these two capable, accurate guns, we fully reviewed both in full here and here. Now lets go full-on versus style.

Trigger: Springfield offers up the SA Gen 2 Speed trigger 4.5-5 pound while Remington fronts a trigger adjustable from 3.5-5.5 pounds.  Both exceptional, and both skeletonized.  Remington’s is adjustable, which is nice, but in the end, trigger quality is on point with both.

Grips: This is a total wash, with both guns sporting essentially the same VZ G10 scales.

Finish: The Remington is coated in matte black PVD while the Springfield shows off a similarly matte Black-T finish. 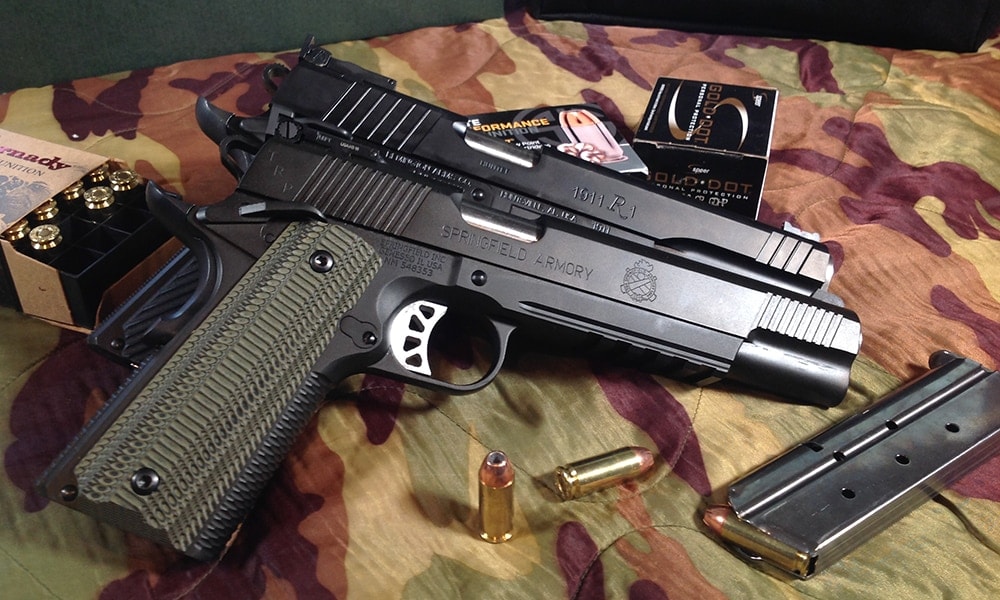 Barrel: Both guns have serious 6 inch match-grade barrels. The TRP advertises a heavy bull barrel, and that becomes immediately clear when compared muzzle-to-muzzle with the R1 Hunter’s standard weight tube.

Capacity: Both ship with a pair of eight-round stainless magazines. 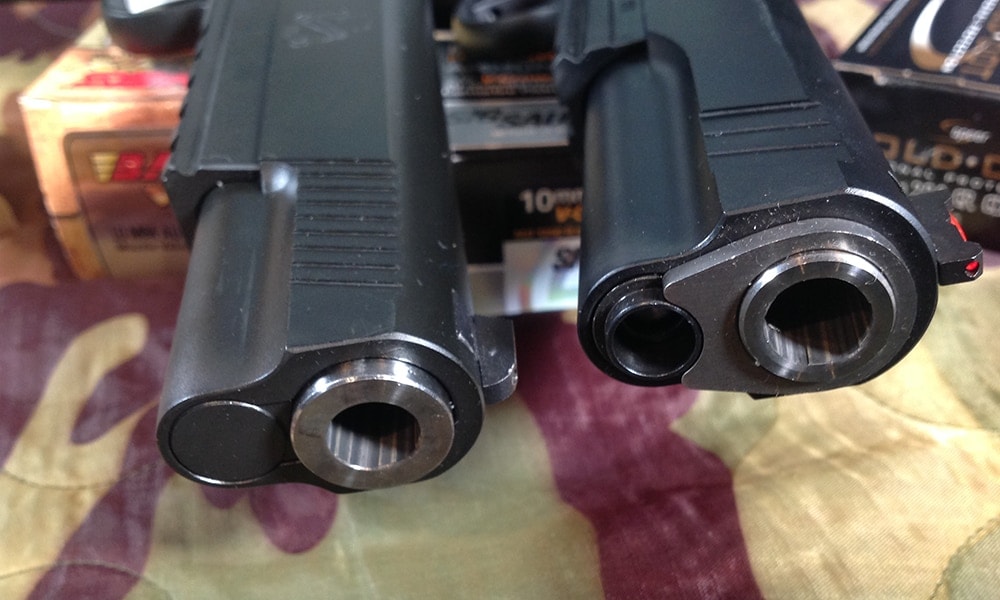 Extras: Lower accessory rail on both, with the Springfield having more and greater attachment points.  Definite edge to the TRP there.  The R1 Hunter comes packed in a heavy cardboard box while the Springfield includes a nice embroidered zipper case with lots of room for extras when heading to the range.

Sights: Fully adjustable three-dot Trijicon tritium sights adorn the TRP while LPA fully adjustable match sights dress the Remington.  The difference becomes clear on the range, as the Springfield’s sights not only acquire quicker and easier, but also allow more precise shooting from the bench.  Remington’s fiber optic front may be more beneficial in the hunting woods, but the Trijicon’s definitely get the nod overall.

Safety: Both pistols wear the expected 1911 beavertail grip safety as well as an ambidextrous thumb safety.

Accuracy:  Without splitting hairs, accuracy with either of these guns is as good or better than the other production 10mm longslides on the market.  Neither makes concessions for top-rail optics mounting ala the MOS Glock 40, but they make up for that with superior irons. 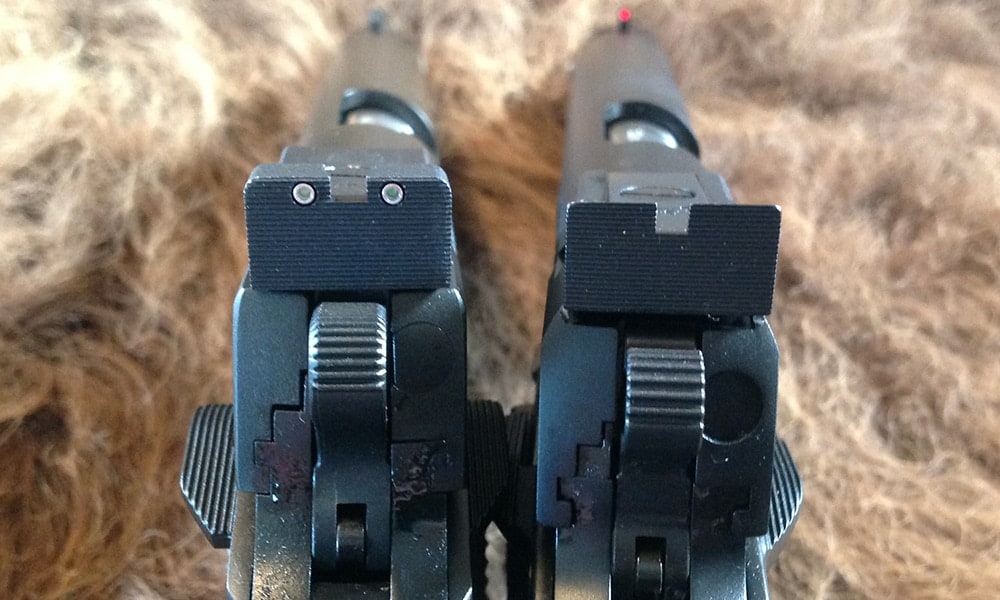 The sights really set these two apart on the range and in the field, with the superior Trijicon three dot Tritium sights on the Springfield (left) and the standard adjustable rear on the Remington (right). (Photo: Kristin Alberts/Guns.com)

Range Work: This is the major sticking point in the test.  The Springfield ran through 100-rounds with 100-percent reliability through two shooters and multiple premium ammunition offerings.  The Remington R1, plain and simple, did not.  We experienced a half-dozen failure-to-feed issues in less than the 100-rounds we fired for the head-to-head.  Interestingly, we had fired the same gun in an earlier test and things are trending to more problematic than less, even with routine cleaning and maintenance.  If anything, we would have expected the issues to work themselves out—not to worsen. The issues can surely be rectified, but nobody likes to take their brand new gun to a gunsmith or send it back for repair. We liked the gun well enough to do just that, and will report back on the findings.

Recoil: Though this is a subjective measure, both pistols are incredibly manageable even with the higher pressures of the 10mm chambering, especially when considered alongside something like the Glock 40 with a much more stout recoil and a considerably lighter frame.  I would gladly shoot either the TRP or the R1 all day on the range.

Cost: Remington gets the clear edge on cost, with an MSRP of $1310 and real-world prices around $900 online. The Springfield, meanwhile is a new debut and carries a hefty retail at $1842 with actual prices not yet coming down much.  Is the price justified?  The gun performs, but only end users can make that determination. 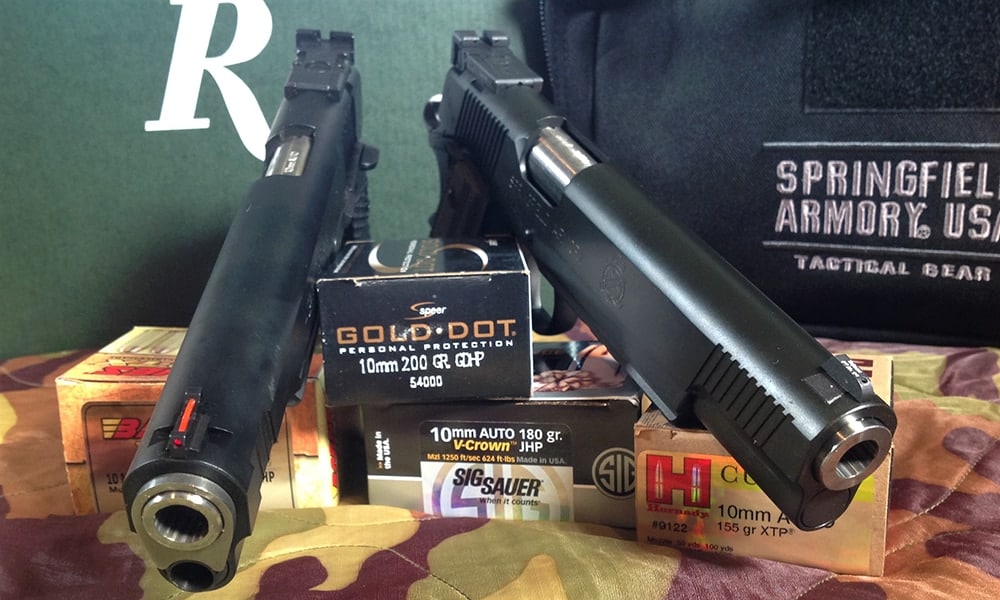 Both these longslide 10mm pistols split the market between tactical and hunting. The six-inch barrels and lengthened sight radius, coupled with weighty builds makes both a pleasure to shoot in terms of recoil and accuracy. (Photo: Kristin Alberts/Guns.com)

There may not be a clear winner at the end of this piece, but rather, it seems to be a win either way depending on individual taste and budget.  Aside from the range failure issues we faced with the Remington, which seem to be isolated largely to our particular gun after speaking with others in the industry, both guns are viable players in their space.  Features are incredibly similar, with price being the biggest glaring dividing line.  Choices may come down to brand loyalty—Big Green or Springfield Armory, a personal one. I’d be happy to take either—or both—of these guns afield on hunts later this year, and given the opportunity, I will do just that.