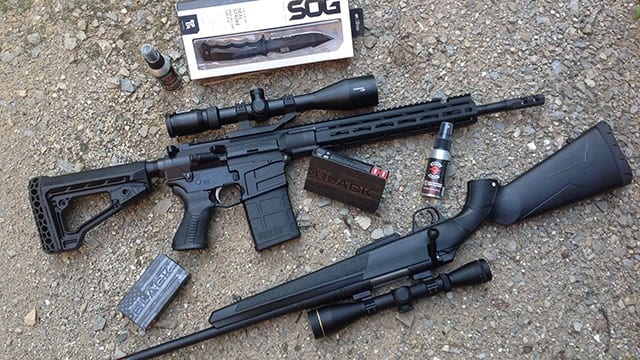 The color black is no longer just for tactical folks. (Photo: Kristin Alberts)

While the color black in the firearms world has long been associated with tactical firearms and operator accessories, that’s no longer the case.  As modern sporting rifles gain popularity with hunters as practical options for taking deer and even bigger game, black guns and gear are booming.  Here are five noir options from 2017 that perk the ears of hunters. 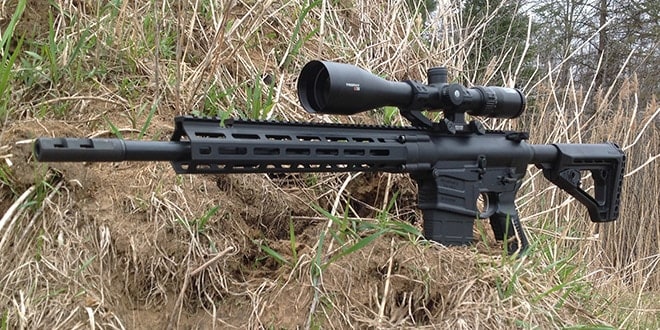 Modern sporting rifles may not be new to hunters; Savage MSR’s are, however—that’s Modern Savage Rifles.  The company debuted a line of four MSR’s, which included a pair of .223’s, a Long Range big bore, and of course, the Hunter.  Though we tested the Hunter in .308, it’s the 6.5 Creedmoor and .338 Federal chamberings that really drive interest from hunters.  With an adjustable gas system ideal for suppressed hunting, Blackhawk! furniture, and a quality trigger, the MSR is a pleasure to shoot.

Accuracy was exceptional with our .308 out to our max 500-yard target.  At a hair under eight pounds empty, these AR-10 platform designs are lighter than many others on the market, making the MSR Hunter a ready hunting companion. Though I’m a more traditional bolt gun hunter, the MSR-10 Hunter was hard to put down, especially when paired with a suppressor.   The MSRP of $1481 seems steep, but with real world prices lower, it’s actually quite fair for what you get, especially considering the general AR-10 market. 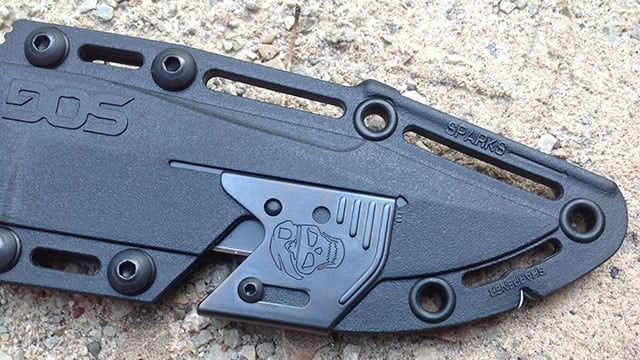 The deluxe model sheath makes this a must have for hunters. (Photo: Kristin Alberts)

The SOG Seal Strike knife in both name and immediate appearance seems much more tactical than hunting-oriented.  Until you get it out in the field, that is.  The lifetime-warrantied black-tini stainless steel serrated 4.9” AUS-8 blade comes razor sharp and stays sharp longer than most other knives we’ve skun, gutted, deboned, hacked wood, and did camp chores with. The glass reinforced nylon and stainless handles are perfectly aggressive. The deluxe model sheath nearly steals the show with an integral paracord cutter, sharpener, and firestarter.  MSRP on the Seal Strike is $134, but the design prowess gained from military deployments on this knife pay huge dividends in the hunting woods. 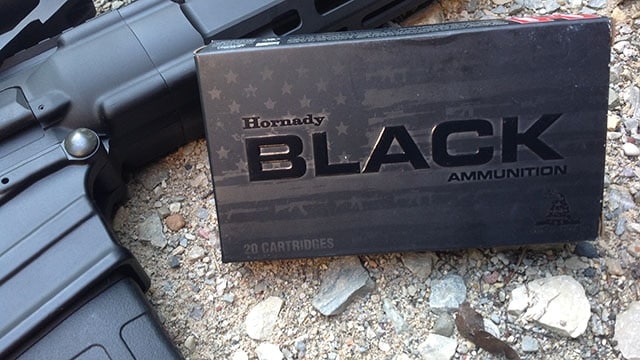 While reliability in semi-automatics is one major factor in selecting ammunition, Hornady BLACK brings the potential for greater accuracy to longer range shooters and hunters using traditional black guns. New for 2017, Hornday’s BLACK ammunition features a wide variety of versatile loads optimized for what they call “America’s favorite guns.” Each box of BLACK comes with variations of premium Hornady bullets, each tailored to a specific platform, like AR’s, AK’s, pistols, rifles, SBR’s and even tactical shotguns.
Though the rounds seem inclined to excel with fit, feed, and function in semi-autos of direct impingement, gas piston, or inertia drive. But it’s important to note that BLACK is equally as friendly with bolt or pump guns, suppressed, sub-, or supersonic jobs as well. As with other Hornady products, BLACK is made in the USA and available in multiple bullet types, including A-Max, V-Max, FTX, and Match.  Prices on the whole are in line with all comparable factory ammo on the market.  BLACK excelled in the Savage MSR with .308 155-grain A-Max, with sub-MOA 100-yard groups, and exceptional accuracy out to the 300-yard mark.
Winchester XPR 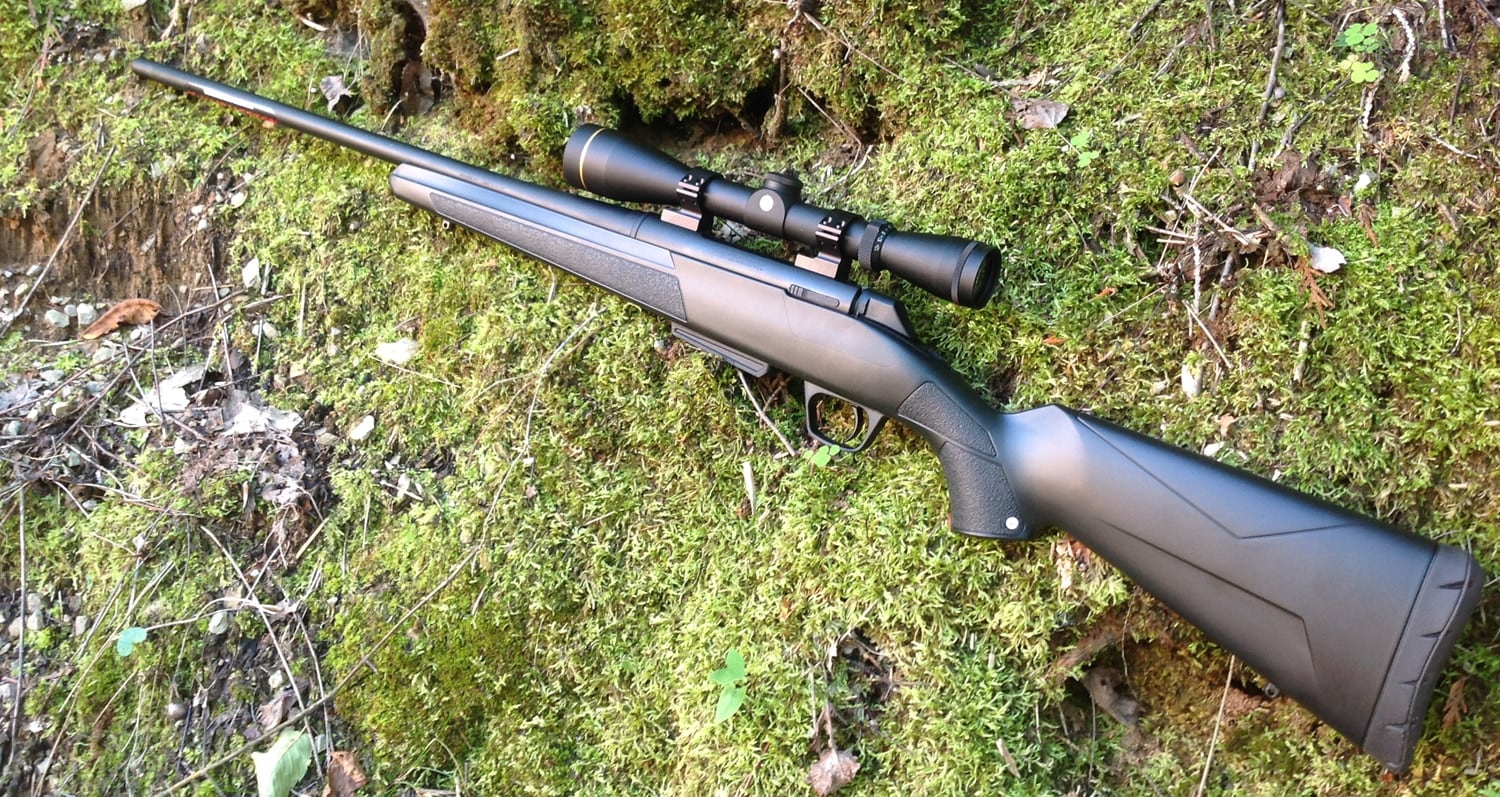 Though not a black gun in the most common terms of a AR-platform, the Winchester XPR made its debut as a plain-Jane black synthetic entry level hunting rifle with upgraded features, all at a budget price.  The trigger is the same adjustable iteration found in the venerable Model 70, exceptional on a rifle of this class.  A single stack, dropbox magazine and target crown on the 20-26” barrels are both nice features. Compact models are available for smaller-framed shooters and Suppressor-ready options are already shipping.
Calibers run the gamut from .243 all the way up to .338 Win Mag with every popular chambering, including the short mag options as well.  Price, regardless of caliber, is $549 black and $599 camo, with store prices even lower, making the rifles affordable, capable, and accurate.  Our test gun in 6.5 Creedmoor sighted in with sub-MOA 100-yard accuracy and is ready for both pronghorn and deer this fall out to 400-yards.  The Winchester XPR is proof you needn’t break the bank for a quality deer rifle. It’s also proof that black, non-camo guns, get the job done in the field, without the worry of weathering that comes with wood.
Hoppe’s Black 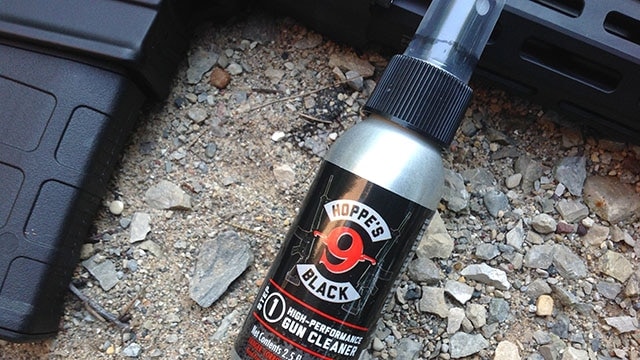 Hoppe’s Black has a temperature range from -65 to 540 degrees. (Photo: Kristin Alberts)

Semiautomatic AR-platform black guns are, by their nature, more fussy to run dirty than levers or bolts.  While many standard cleaners will work, Hoppe’s saw an opening in the market and now we have Hoppe’s Black.  This is a line that includes: Gun Cleaner pump spray, Copper Cleaner, Precision Oil, Gun Grease, and Lubricating Cloths.  While all the products really excel on traditionally black guns like the Savage MSR above, they work equally well on all firearms, including our hunting guns. Semi-autos often operate at higher temperatures and seem to generate more fouling,  as a result their cleaners must be up to the task.  Thus, Hoppe’s Gun Cleaner goes after aggressive carbon buildup, and does indeed seem to melt it better than others.  Both the Precision Oil and Gun Grease shine with its temperature range from -65 to 540 degrees. While we wouldn’t advise hunting in those extremes of conditions, it’s nice to know your gun should be ready to perform in more reasonably adverse weather. Plus, the smaller 2.5oz Cleaner and 2oz Oil, available for $6.99 and $5.27 respectively, are the perfect size to throw in your hunting pack for a quick spray down after a day afield.