In a previous article, I discussed what I consider to be the cornerstone of the prepper’s firearm collection – .22 semiautomatic rifles.  As good as these guns are, they’re not meant to do everything.  We all know that.

Is there one gun that can do it all?  I don’t think so.  But it is a legitimate concern.  The survival minded forum posters are fond of some version of this impossible question.  What would you take with you if you could only take one gun?

People much smarter than me have given this lots of thought and here is what they’ve come up with.

The .22 LR/.410 combination is the Swiss Army knife of guns – one gun that will do two or more things.  These less-than-fashionable monstrosities offer unique one-gun solutions for those who might not want to build an arsenal for every possible scenario.

The .22 LR cartridge has the advantage of being cheap, readily available and light.  The .410 offers more versatility.  Some .410s also shoot .45s.

This gun has its own unique style.  The M6 Scout is a hammer-fired over/under rifle — the top barrel holds the .22 and the bottom holds the .410 shot shell, of course – and it has literally just what you need to fire a round. The barrel, receiver, stock and fixed sight – so no fore-end or sign of ergonomics on the grip.

However, a quick Google image search will show some of the wild ways shooters have customized these versatile guns.  The gun was originally designed to fit the same niche as the AR7 – the M6 was a weapon of last resort for the Air Force in the 50s up until the 70s.

The M6 can be more accurately described as a carbine. If it wasn’t for the longer stock, which doubles as a storage compartment for ammo, it would be roughly the same size as a Ranch Hand or Mare’s Leg — whatever you want to call it. Overall length is 32 inches, but when folded it’s 15 inches, and it weighs less than five pounds. 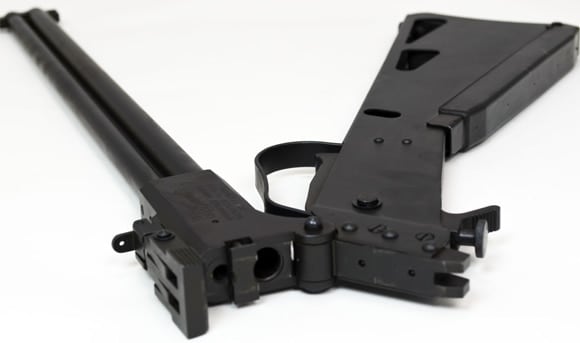 I love Springfield Armory, the company and the guns.  And its M6 is no exception.  I even wrote and asked if they had any old M6s hanging around that they might allow me to review.  Sadly, no. Springfield quit making them in 2008.

And what a missed opportunity.  These guns didn’t retail for all that much and they regularly sell on the auction sites for $800 or more.  Too bad Springfield didn’t see this demand coming.  If the world doesn’t grind to a halt in December, this could have been a real boost to their bottom line.

Another company that used to make a very nice combo is Savage.  According to the website Savage24.com, a site dedicated to the rifle, it’s “probably the most common combination gun in the world. Budget priced, and in near-constant production since 1939, these guns show up through much of the world.”

The Savage 24 is similar to the M6 Scout in that it’s a traditional single shot, break action with the .22 LR barrel riding over the .410, but it has a more traditional design — like a pistol grip and fore-end. In addition, the Savage 24 was also discontinued in 2008 because it got to be too expensive to manufacture.

However, Savage did come out with a similar model called the Savage 42 (huh?). While it has similar features to the Model 24 and would be considered by most to be the resurrection of it, the Model 42 is constructed differently and was designed as a Youth model. It comes standard with a synthetic stock, has a 20-inch barrel and weighs 6.1 pounds. MSRP is $459.

Rossi is known for no-frills firearms.  The matched pair is a perfect example. One stock and action can accommodate different barrels.  The .410 is easily exchanged for the .22, effectively making this two distinct guns.

The disadvantage to this is obviously the barrel switching required.  In order to use both, you would need to carry one spare barrel.

But Rossi makes a number of different types of these guns in common calibers, too.  You can have the pair as a rifle or as a pistol.  And they even make one that comes with three barrels – the Rossi Full Sized Muzzle Loader Matched Set comes with barrels for 12 gauge, .22 LR and .50 Muzzle Loader.

This gun is a bit larger than I’d like for a combo gun, but it is a combo.  It is made in Russia and imported by USSG.  While I like the concept, and the wide variety of calibers, I’d still go with the smallest offerings.

The MP 94 seems more like a one gun solution for most any hunt — birds and grounded animals.  The size and weight and the wooden stocks seem more manageable a long weekend.

Like the M6 Scout or the Savage 24 it’s an over/under, but that’s where the similarities end. It feels a lot like a typical over/under shotgun with a sturdy and attractive design. More often than not the Baikal is found with larger calibers like the .308/12 gauge combo — a set up that has been said to fit the bill for many hunters in the northeast.

This break-action combo has a 19.7-inch barrel putting the overall length at 40.7 inches and weight at 6.1 pounds. They can be found for about $500.

This one’s for all you hipster preppers who are ready to cash out your 401Ks early.  Really – what’s the point?  If the end is near, might as grab the most of that money now.  The Game Getter will set you back two grand.  But it does come in a kitschy box.  And we’ll all be starting fires with our leftover money once the zombies come, anyhow.

The Game Getter idea is more than a century old.  It looks like something out of a wild-west inspired space comic.  But it would be an amazingly useful gun.  And I can’t think of a more stylish way to enter into the unknown.

This model – the third gen – is a replica of the original 1908 model, but instead of a 15-inch barrel the standard comes with a 18.5-inch barrel. It weighs next to nothing at 2.25 pounds and has folding sights.

The first and second generations were shorter, so if you want it now it requires a special Any Other Weapon Tax Stamp, which cost five bucks.  Not that the zombies will checking stamps.

The perfect combination gun is harder to come by than it should be.  The M6 Scout should still be in production.  I’m waiting on the Savage.  If the new Model 42 lives up to the reputation of the old Model 24, it will top the list for many prepsters.

What combo gun takes your attention?